War and peace in the human gut: Probing the microbiome

ASU researcher and team explore how dietary choices can fuel conflict or promote cooperation in gut microbes, with health consequences

Human well being often flourishes under conditions of cooperation with others and flounders during periods of external conflict and strife.

According to Athena Aktipis, a researcher at Arizona State University’s Biodesign Institute, microbes within the body — collectively known as the microbiota — also engage in cooperative and combative behavior with human cells in their environment. This is particularly true in the human gut, where many trillions of them exist in the digestive tract in communities of bewildering diversity. 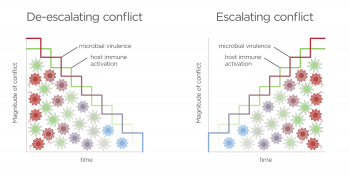 Dangerous escalation may result from unresolved conflict between host and microbiota, fueled by a competitive arms race between host and microbiota. Immune resistance is triggered by microbial signals associated with invasion or other harm to the host. Inflammation, in turn, causes increased microbial virulence gene expression. Positive feedback perpetuating escalating conflict can result in increasing costs and a negative outcome for both partners. Graphic by Jason Drees Download Full Image

In research appearing in the current issue of Annals of the New York Academy of Science, Aktipis and her colleagues Helen Wasielewski (ASU’s Department of Psychology) and Joe Alcock, (at the University of New Mexico Department of Emergency Medicine) examine the role of microbes in the gut. Their study explores how dietary choices promote cooperation or might fuel conflict between gut microbes and the humans they interact with, maintaining health or encouraging the onset of disease.

The new research provides important insights into the subtle interplay of diet and human health as well as paving the way for management of the microbiome, particularly for the treatment and prevention of inflammatory and metabolic disease.

“Our gut microbes are not just passive recipients of the food that we eat — they evolve and change in response to what we feed our bodies. And there are certain foods that lead to resource sharing between us and our microbes, while other foods can lead to conflict and resource competition between our bodies and our microbes,” Aktipis said. “This cooperation and conflict framework can help us understand certain aspects of why we get sick and how we can stay healthy.”

Scientists are only beginning to appreciate the significance and complexity of the bacteria making up the microbiota, which number approximately 30 trillion, about the same number as human cells. Colonization of the body by a vast array of microbes begins at birth, when a newborn is exposed to maternal vaginal, fecal and skin flora.

Most of the human microbiota resides in the gut. At least 500 different species exist, though most fall into several well-recognized groups. Emerging research suggests the composition of these microbes exerts a profound influence on human health throughout life, including the propensity for obesity and the susceptibility to allergies. They may even affect behavior.

In the new manuscript, Aktipis and her colleagues explore the effects of particular nutrients in food on the behavior of gut bacteria. Their innovative approach applies evolutionary theory to the issue and proposes that the microbes inhabiting the human gut engage in competitive or cooperative behavior, depending in part on the particular diet they are exposed to. 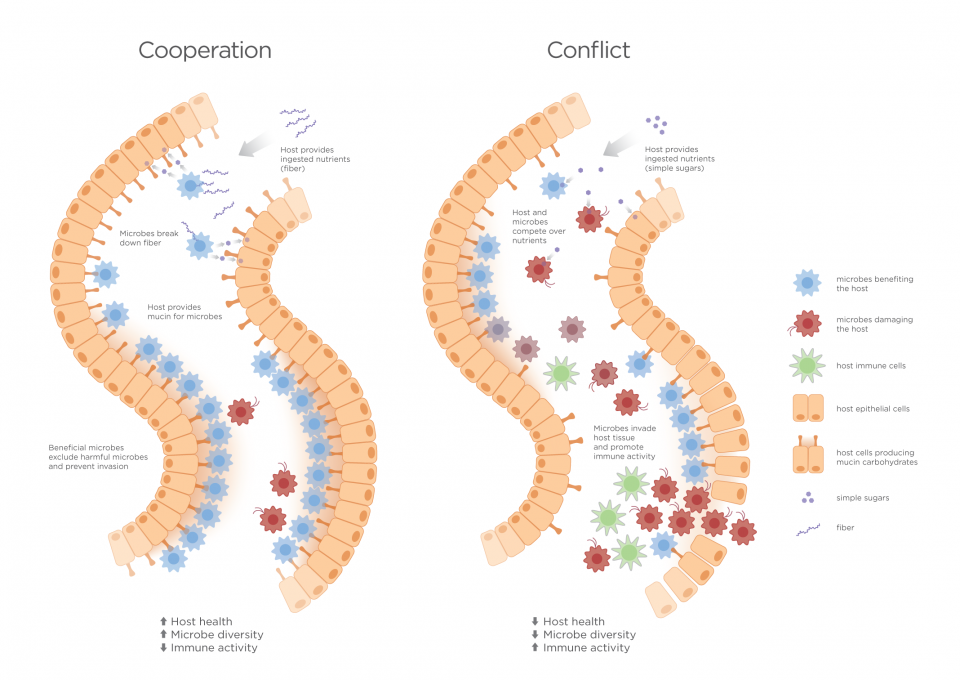 Cooperation and competition are hallmarks of evolutionary processes, guiding the fate of all living organisms. In the human body, conflict and cooperation between cells of differing genetic makeup can have important consequences for health and disease.

One classic example is that of cancer cells, which mutate genetically, form independent clusters and rob resources from the host for their own benefit. Cell competition can also occur between maternal cells and those of a developing fetus, another topic Aktipis has explored in earlier research. 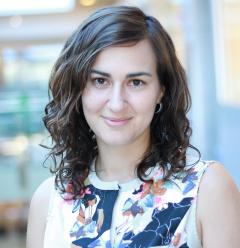 In the current study, Aktipis (pictured left) and her colleagues examine cooperation and competition between the human and non-human, that is, between the cells making up human tissues and organs and the multitude of microbes (e.g. bacteria, fungi, and archaeons) co-existing in the same individual.

Cooperative behavior between humans and gut microflora occurs when bacterial cells produce energy and vitamins and help to screen out pathogens threatening the host. In return, host cells help maintain the microbial habitat, providing them with an environment conducive to their growth and proliferation — a win-win situation.

The authors propose that a cooperative alignment of needs between gut microbes and the human host should lead to positive health outcomes, while conflicts over resource utilization can often generate disease.

Helen Wasielewski, postdoctoral scholar in the Aktipis Lab, argues that taking a microbial perspective is useful in understanding these cooperative relationships: “Thinking about transmission, or how these microorganisms move between hosts, is really important here. If bacteria are able to move between hosts easily, they can exploit the current host and move on, whereas if they’re more limited they can become dependent upon the reproductive success of the host for their own success,” she said. “In extreme cases, symbionts become dependent upon their hosts to such an extent that they no longer have the capacity to live outside the host — we see examples of this in some invertebrates.”

Internal disputes can break out when the needs of microbes and humans are at cross-purposes. Should conditions of cooperation break down, gut microbiota may contribute to chronic afflictions including inflammatory, metabolic and cardiovascular diseases or use nutrients intended for the host, causing inflammation and other negative health effects.

Sugar and fat in the diet may constitute a recipe for such internal conflict. Unlike dietary fiber, fats and simple sugars can be used not only by host cells but also by potentially harmful microbes, such as pathogenic E. coli. Instead of resource sharing, a microbial tug-of-war ensues.

When low fiber intake in the diet is combined with abundant sugar, populations of harmful microbes can expand, leading to inflammation-related illness. The ingestion of iron also carries certain health risks and can sometimes lead to internal conflict.  A variety of pathogens steal iron directly from host cell proteins. When harmful microbes gain access to key nutrients like iron, the body responds by ramping up immune activity against these microbes. This can result in escalating conflict between human and microbial cells, with deleterious impacts on human health, that may include adipose inflammation, obesity and diabetes.

In gauging the health effects of modern Western diets, the new study identifies both benefits and risks associated with cooperation and conflict in the human gut.

The wide availability of foods with high nutritional density and low pathogen load acts to promote health through microbe-human cooperation. Among the specific nutrients examined in the study, breast milk is highlighted for its benefits to both mother and infant. It has been credited with reducing infant mortality and limiting the risk of chronic diseases later in life.

Non-digestible carbohydrates in milk feed protective microbiota in the gut. Specialized proteins in breast milk provide an immunological effect, including cytokines, immunoglobulins and lactoferrin that act to reduce infection risk.

On the other hand, Western diets may contribute to human disease, including obesity and other chronic inflammatory diseases as a consequence of their low fiber content and high proportion of simple sugars, saturated fats and emulsifing agents.

The research findings highlighted in this paper mark a departure from conventional ideas concerning diet, suggesting the negative health consequences of certain foods may be due to their effects on the subtle interconnection of host and microbiome.

Athena Aktipis is a researcher in the Biodesign Institute, assistant professor in the Department of Psychology at Arizona State University and co-director of the Human Generosity Project.

Top college graduates from across the country are training at Arizona State University’s Walter Cronkite School of Journalism and Mass Communication this week as part of an intensive media sales boot camp through the National Association of Broadcasters Education Foundation.The Media Sales Institute is an 11-day residential seminar designed to expose recent graduates to the necessary skills to ...

Top college graduates from across the country are training at Arizona State University’s Walter Cronkite School of Journalism and Mass Communication this week as part of an intensive media sales boot camp through the National Association of Broadcasters Education Foundation.

The Media Sales Institute is an 11-day residential seminar designed to expose recent graduates to the necessary skills to launch media sales careers. Fifteen graduates from 11 universities are participating in the June 5-16 event, receiving in-depth training from experts in media research, customer needs analysis and developing integrated media campaigns, among other topics. 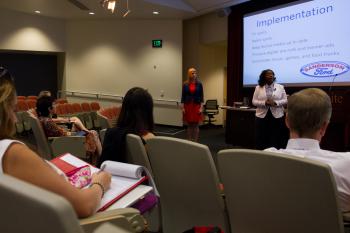 Top college graduates from across the country are at ASU's Cronkite School this week receiving media sales training as part of a prestigious camp through the National Association of Broadcasters Education Foundation. Download Full Image

“The Media Sales Institute continues to identify and prepare future sales leaders to launch their careers,” said NABEF President Marcellus Alexander. “ASU is a valued partner in this initiative, assisting the next generation of multi-platform sales professionals in taking their place in the ever-changing communications ecosystem.”

The program selects participants on a competitive basis, bringing graduates of diverse backgrounds to the ASU Downtown Phoenix campus for training at the Cronkite School in radio, television, cable, print, digital and internet sales.

Fellows receive admission to the institute, including housing, transportation and meals at no cost, and the opportunity for one-on-one interviews with national and regional media companies. Major media companies represented at the institute this year include Scripps, Meredith Corporation, Cox Media and Sinclair Broadcast Group, among more than a dozen attending.

ASU is one of only three institutions in the nation to host this annual event, alongside Florida A&M University and Howard University. This is the third year the program is being held at the Cronkite School. The Media Sales Institute is supported by TEGNA Foundation and Patrick Communications.

“We are excited to have this opportunity to connect some of the country’s outstanding graduates with top media companies, and to see the list of participating companies continuing to grow,” said Cronkite Assistant Dean Mark Lodato, who leads the institute. “The development and networking experiences offer participants a real edge in landing media sales jobs and provide our media partners top-tier talent for recruiting.”

NABEF is a nonprofit organization dedicated to reinforcing the future of broadcasting through a commitment to education and to advancing excellence in the diversity and community service efforts in the industry. The NAB is a trade association that advocates on behalf of more than 17,000 free, local radio and television stations and broadcast networks before Congress, the Federal Communications Commission and the courts.