For his far-reaching contributions to the construction industry, a prominent national organization of professional engineers is giving one of its most prestigious awards to Arizona State University professor G. Edward Gibson Jr.

Gibson is director of the School of Sustainable Engineering and the Built Environment in ASU’s Ira A. Fulton Schools of Engineering, and he holds the university’s Sunstate Chair in Construction Management and Engineering. 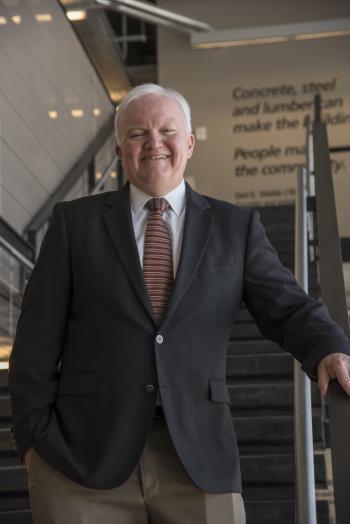 The American Society of Civil Engineers (ASCE) will present him its 2016 Peurifoy Construction Research Award in September during its annual meeting in Portland, Oregon.

The award honors those who have made significant advancements in construction engineering and management through research and development of new technology, principles or practices.

Gibson is being recognized specifically for accomplishments in “the study, implementation and application of methods and practices to improve front-end planning of capital projects across all industry sectors.”

ASCE’s award announcement notes Gibson’s stature in the field as “the leading academic expert on front-end planning of major capital facilities” throughout the world.

Front-end planning is the ubiquitous process that creates strong early links between the business or mission need and a building project’s strategy, scope, cost and schedule, and maintains these links throughout the duration of the project.

A critical part of front-end planning is risk assessment and reduction, as well as cost analysis and project scheduling.

Gibson has been leading research focused on producing more effective front-end planning for the past 25 years — work that has led him to be in demand as a consultant for a plethora of major industrial, commercial and infrastructure projects.

His research teams over the years have studied about 1,300 projects, representing more than $100 billion in investments. He has worked with more than 300 organizations to develop methods, practices and decision-support tools that have been adopted by many major organizations — both large and small engineering and construction companies, and owners of major capital projects, including a number of Fortune 500 companies

Gibson’s work has drawn support from many of the federal government agencies that fund research considered important to national interests, as well as from major private industry organizations, including the Construction Industry Institute.

He has taken the results of his efforts from the lab to the classroom, teaching university courses on the subject for the past 20 years and by leading more than 130 continuing education short courses in front-end planning for construction professionals. He has also given more than 125 presentations on the subject at conferences and other industry gatherings around the globe.

Beyond the impact of research and education, Gibson has consulted on planning for a variety of capital projects with more than 50 organizations throughout the world, in Europe, Asia, North America, South America, Africa and Australia. He estimates he has had a role in more than $150 billion worth of building projects.

In addition to private industry and public agencies, his work has served NASA, the Smithsonian Institution, the Army, the Navy, the Air Force, the Department of Health and Human Services, and the Department of Energy.

His “profound contributions” have “advanced the art, science and technology of the [construction] industry” worldwide, wrote professor Samuel Ariaratnam, the chair of ASU’s construction engineering program, in his letter nominating Gibson for the Peurifoy Award.

Gibson is “uniquely and superbly qualified for this award,” Ariaratnam said. “No one in academia has done more to increase the awareness of the best practices in front-end construction planning for major capital projects in the United States and around the world.”

Gibson said he is especially honored to receive an award named for Robert Peurifoy, who is considered an icon in the field of construction engineering and who started one of the first university-level construction management degree programs.

Gibson studied from two of Peurifoy’s seminal textbooks while an undergraduate student, and later used the books in courses he taught at the university level.

More significantly, one of his colleagues in the field who nominated him for the award was his mentor during the early part of his career in academia and was the first winner of the Peurifoy Award.

“That makes this a great honor for me and a special career highlight,” Gibson said.

He still has goals to achieve in his area of expertise. He notes in particular that he has had consulting roles in the planning of projects on six of the world’s seven continents.

“Now the challenge is to find an opportunity to work on a project in Antarctica,” he said with a smile.

Twenty-eight high school students from across the country will learn multimedia reporting skills this month as part of the annual Summer Journalism Institute at Arizona State University’s Walter Cronkite School of Journalism and Mass Communication.The students, many from underrepresented communities, will attend classes at the Cronkite School and live on ASU’s Downtown Phoenix campus from June...

Twenty-eight high school students from across the country will learn multimedia reporting skills this month as part of the annual Summer Journalism Institute at Arizona State University’s Walter Cronkite School of Journalism and Mass Communication.

The students, many from underrepresented communities, will attend classes at the Cronkite School and live on ASU’s Downtown Phoenix campus from June 5-17. 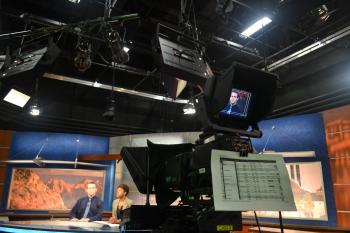 Students are receiving full scholarships to cover housing, meals and training through support from the Arizona Broadcasters Association, the Scripps Howard Foundation and generous gifts from Cronkite Endowment Board members Tom Chauncey and Tim Riester.

“There is no other opportunity like this for students to get a real glimpse into the broadcast industry,” said Art Brooks, president and CEO of the Arizona Broadcasters Association. “It’s an honor for us to have such a positive impact on the lives of students.”

Students will attend class sessions taught by Cronkite faculty on reporting, writing, multimedia journalism and videography and editing. They also will tour local media outlets and meet professional journalists. The students cap the experience by producing a newscast and a multimedia-rich website at the Cronkite School.

The Summer Journalism Institute is led by Anita Luera, the Cronkite School’s director of high school journalism programs and president of the Arizona Latino Media Association. Classes are taught by Luera and Cronkite faculty and staff, including associate professor Craig Allen and faculty associates Chuck Emmert and Ceasar Hernandez.

“Each summer we work to provide unparalleled multimedia journalism experiences for high school students,” Luera said. “This year will be no different as students will see what a future could be like in journalism today.”