It’s the “continuation of an exploration of contested spaces,” says the group. “Repellent Fence” is the product of over three years of work by Postcommodity members Raven Chacon, Cristóbal Martínez and Kade L. Twist, who have been in residence at the ASU Art Museum’s International Artist Residency Program several times as they worked to realize their vision for the installation. 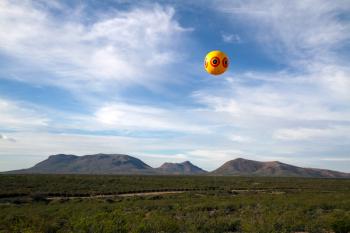 “The residency program has been amazing — it’s comfortable, well-appointed, right in the middle of Phoenix, and surrounded by a generative and talented art community. It’s an ideal home base to realize a project,” says Twist. “All of the resources that the museum and its staff leverage on behalf of the artists have brought so much to the table. I can’t even begin to explain how important this residency has been in terms of realizing the ‘Repellent Fence.’”

The “fence” itself, which will be installed through community action from Oct. 9–12, 2015 near Douglas, Ariz. and Agua Prieta, Mexico, is comprised of over two dozen massive balloons — each 10 feet in diameter — that will float 50 feet above the desert landscape. Together, they will create a temporary two-mile-long sculpture that intersects the U.S./Mexico border.

The balloons are scaled-up replicas of “scare eye” balloons, a consumer product designed to repel birds. Postcommodity notes that the “scare eye,” which looks similar to a yellow and red bull’s-eye target, actually “utilizes iconography and traditional medicinal colors used for thousands of years by indigenous peoples from South America to Canada.” Through appropriating that iconography in their project, the collective hopes to open a dialogue about indigenous cultural relationships to land, and to “demonstrate the interconnectedness of the Western Hemisphere by recognizing indigenous peoples and long-view histories that encapsulate migration, trade, relationships, communication and cultural exchange.”

Twist and Martinez are both ASU alums — Twist received a Master of Fine Arts from the ASU School of Art, and Martinez received a doctorate in rhetoric, composition and linguistics from the Department of English in the College of Liberal Arts and Sciences in 2015, after completing a master’s in media arts and science and bachelor’s degrees in studio art and painting, in the Herberger Institute’s School of Arts, Media + Engineering and School of Art, respectively. They’re also not strangers to international art fame. In 2012, they, along with the rest of Postcommodity, exhibited at the 18th Sydney Biennale. The project they presented, “Do You Remember When,” was commissioned by the ASU Art Museum and originally unveiled at the museum’s Ceramics Research Center in 2009.

To make “Repellent Fence” a reality, Postcommodity conducted dozens of meetings with individuals, communities and local organizations to acquire permission to stage the installation and to ensure safe public access for audiences viewing the project, which will be installed on public and private land in Mexico and Arizona. They chose to work outside the framework of arts institutions and galleries to emphasize the power of international collaboration and the desire of border cities to “redefine dialogue.”

The monumental installation is just one part of a larger public engagement campaign that will include public programming, performances and the first-ever cross-border art walk in Douglas and Agua Prieta. Over the course of the weekend, the Arizona Commission on the Arts will present a series of artist workshops and artist-led community conversations featuring several artists local to Douglas, including ASU School of Art alumna M. Jenea Sanchez, as part of their new AZ ArtWorker Initiative. Visual and performance artist Ana Teresa Fernández will also visit Douglas as part of her residency with ASU’s Performance in the Borderlands, an initiative of the ASU School of Film, Dance and Theatre.

With just a few weeks remaining before “Repellent Fence” is installed at the border, the group is excited. “The installation itself is significant, because it is a large-scale manifestation of intense bi-national dialogue, collaboration and diplomacy,” says Martinez. “This represents the self-determination of Douglas and Agua Prieta to collaborate with one another and unify their communities despite the border wall.”

“This act of re-inhabiting historically shared terrain and marking it with contemporary versions of ancient icons reveals the U.S./Mexico border to be what it is: the arbitrary and artificial overlay of power derived through coercion,” says Gordon Knox, ASU Art Museum director. “I am delighted that the museum’s residency program can serve as a springboard for artists of Postcommodity’s caliber and enable cross-disciplinary projects like ‘Repellent Fence.’”

“Repellent Fence” is presented in collaboration with the ASU Art Museum and is supported by Creative Capital, Native Arts and Cultures Foundation, Joan Mitchell Foundation and Art Matters.

The public is invited to attend “Repellent Fence” and the surrounding programming, Oct. 9–12, 2015 in Douglas and Agua Prieta. A full schedule of events and more details on the project are available at
repellentfence.com.

First things first: Spoiler alert!The space survival epic “The Martian” hit theaters Friday to rave reviews from critics – and even some scientists.Based on the 2011 book by Andy Weir, the story revolves around astronaut Mark Watney, who is left stranded on Mars after a NASA mission. With no hope of rescue for at least three years, he has to figure out how to make water, grow food and hack t... 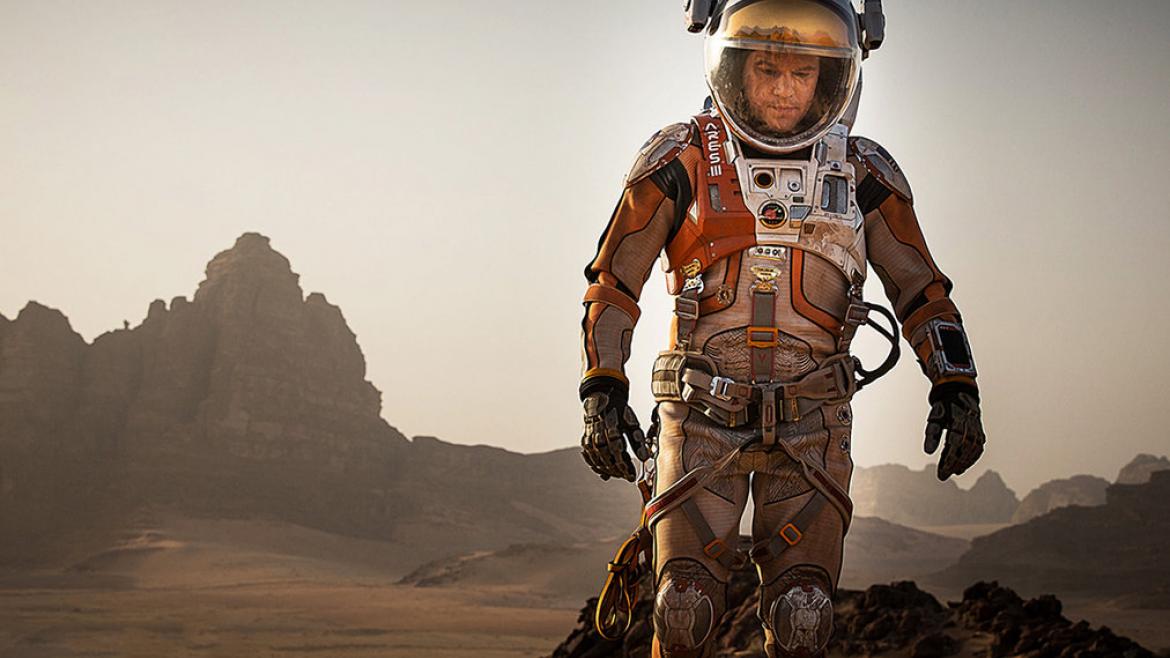 ASU space students give 'The Martian' a thumbs-up — mostly

Some 'Martian' tech was too slick, but overall it was fun, SESE students say.
October 2, 2015

The space survival epic “The Martian” hit theaters Friday to rave reviews from critics – and even some scientists.

Based on the 2011 book by Andy Weir, the story revolves around astronaut Mark Watney, who is left stranded on Mars after a NASA mission. With no hope of rescue for at least three years, he has to figure out how to make water, grow food and hack technology to survive. He’s a walking university who uses math, botany, engineering, chemistry, physics and a lot of duct tape to survive in a place where, as he describes it, “there are nothing but problems.”

“Transdisciplinary” doesn’t even begin to describe this guy.

Two students from Arizona State University’s School of Earth & Space Exploration — both well on their way to becoming Mark Watney themselves — caught the flick at an advance screening Friday afternoon and were ready to discuss the realistic appeal of a film being praised for its devotion to true science.

“There were 100,000 things they got right, but the tires were rubber on the rover. Rubber isn’t going to last when you have temperature fluctuations of 200 degrees.”
— Jake Shellenberger, ASU student

Mark Williamson is vice president of Students for the Exploration and Development of Space at Arizona State University and an undergraduate researcher in the Space and Terrestrial Robotic Exploration (SpaceTREx) Laboratory.

He said the ships looked a little too much like an Apple store, instead of the cluttered and cramped interiors seen on the actual International Space Station.

“It looked overly aesthetically pleasing,” he said, but added: “In general it was really cool.”

The Mars habitat in the film passed muster for Williamson, who said he has attended lectures on Mars habitat experiments in the Utah desert.

Jake Shellenberger, a space exploration design major in the School of Earth and Space Exploration, has an interesting perspective on Watney’s survival techniques. He said he has trained in how to do the type of tech hacks the character pulls off in the movie.

“I thought it was great,” Shellenberger said. “Last semester we had a seminar based on the premise of ‘The Martian’ and it was through a guy at (Jet Propulsion Laboratory). It was listed as a field engineering seminar ... the very first day he said this Andy Weir book is an inspiration.”

Shellenberger took apart remote control vehicles and built a camera timer from the parts in the seminar.  And as part of a student team called Mars Track, he was responsible for coming up with a tire that could last on Mars.

“There were 100,000 things they got right, but the tires were rubber on the rover,” he said of the film. “Rubber isn’t going to last when you have temperature fluctuations of 200 degrees.”

It’s among a small list of things the movie didn’t portray quite correctly.

For instance, both Shellenberger and Williamson thought the Martian gravity was inaccurately portrayed.

“The gravity is supposed to be a little less than half,” Shellenberger said, comparing it to Earth. “He shouldn’t have had that much trouble knocking the roof off the ship.”

And, “The reduced atmosphere — considering the tarps he was using — they shouldn’t have been blowing around that much,” Williamson said.

At one point in the film Watney digs up a radioactive thermoelectric generator, or RTG, from a shallow hole, buried there because it contains plutonium. The unit is used on flyby missions as a power source, and also keeps instruments warm at operating temperature, according to Williamson.

“He got cold on the rover, and dug up an RTG to warm himself,” Williamson said. “They would have dug it a lot deeper than that.”

“The guys had paper – that’s a lot of weight to take with you,” he said. “You’d think they’d be using laptops and [tablets] ... The flip side is they said they sent stuff ahead to meet missions, so that might have been a function of this.”

A few massive dust devils sweeping across the Martian vistas added some drama to the film, but Williamson thought they were a bit too big.

“There are very periodic dust devils that have been observed by different Mars rovers, but the scale and the density of the columns was a little dramatized, but it was pretty cool of them to include them,” he said.

The Martian sky was a bit off as well.

“The sky wouldn’t have been so dark,” Williamson said. “It looked like it was colored blue or greenish. It would either have been red or lightly brown.”

Despite all the hacking and improvisation by Matt Damon’s Watney, one omission irked Shellenberger.

“The movie was a good film,” he said. “The fact they didn’t use the word MacGyver in the movie once was wrong, just as kind of an homage.”