Arizona State University students collected more than 105,000 pounds of reusable or recyclable items during the spring 2016 Ditch the Dumpster move-out event. Each year, students in ASU residence halls donate or recycle unwanted items instead of throwing them away to help benefit local organizations and families in need. 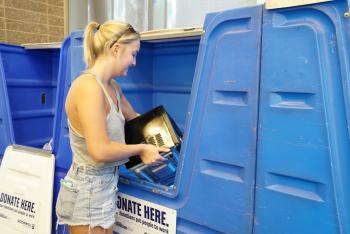 Business freshman Meg Myers places a microwave into a donation bin as part of Ditch the Dumpster. Each year, students in ASU residence halls donate or recycle unwanted items instead of throwing them away to help benefit local organizations and families in need. Download Full Image

“Year after year, students make a difference in someone else’s life by donating items to community members in need,” said Katie Schumacher, ASU Zero Waste senior program coordinator. “We look forward to fall move-in, when students have yet another opportunity to support the local community and divert waste.”

During the fall, students moving into residence halls are also asked to “Ditch the Dumpster” by recycling cardboard, Styrofoam and other packaging materials.

“We also were fortunate this year to have good media coverage that builds awareness about the impact of student recycling and donation efforts,” Schumacher added.

This year’s event was featured in these news outlets and publications:

For more information about Ditch the Dumpster, visit ditchthedumpster.asu.edu.

Arizona's governor has major love for ASU.And why shouldn’t he?When Doug Ducey was a junior in high school in Toledo, Ohio, his life was at a crossroads. His parents announced they were splitting up, college was just around the corner and he had no idea where his life was going.Ducey didn't know where he was going to college, what his major would be or what the future held for him. A trip to his... 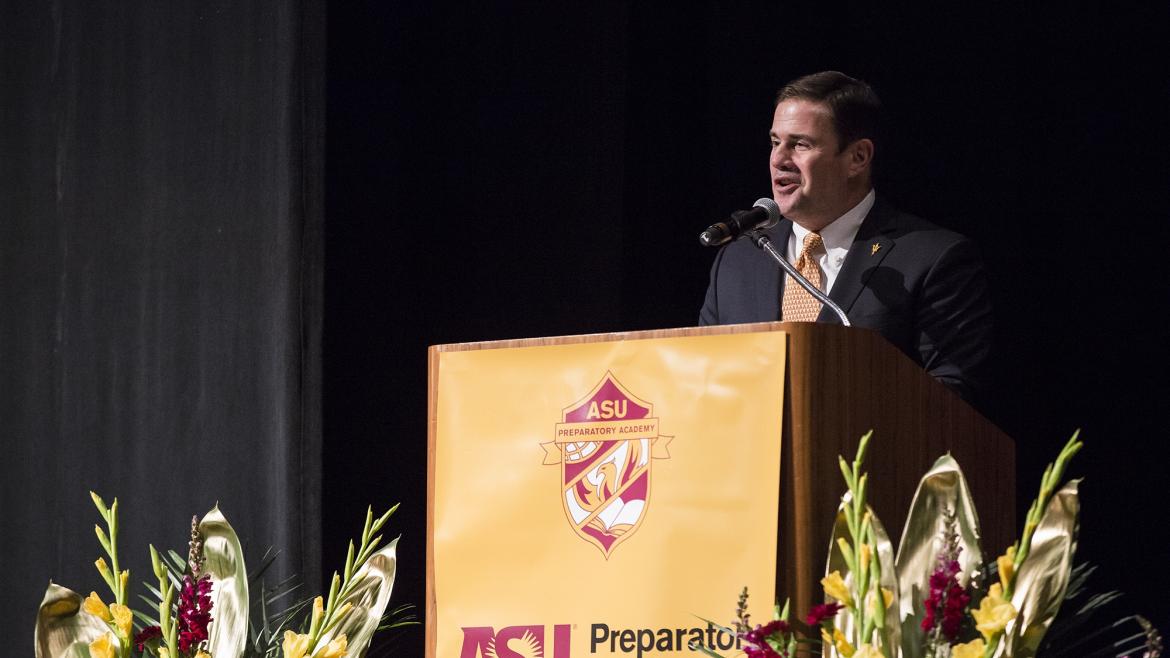 And why shouldn’t he?

When Doug Ducey was a junior in high school in Toledo, Ohio, his life was at a crossroads. His parents announced they were splitting up, college was just around the corner and he had no idea where his life was going.

Ducey didn't know where he was going to college, what his major would be or what the future held for him. A trip to his high school counselor’s office changed all that.

“He pulled out a map, pointed to a spot out West and said, ‘Arizona. Schools are affordable and there’s a lot of opportunity,’” Ducey said. “So I packed my bags, got in my car and moved from Toledo, Ohio, to Tempe, Arizona.”

Four years later, Ducey graduated from ASU in 1986 with a Bachelor of Science degree in finance — the first in his family to get a college degree.

Ducey demonstrated his affection for his alma mater when he addressed the 96-member graduating body of ASU Preparatory Academy-Phoenix on Thursday night, his first ever as governor, at ASU Gammage in Tempe.

“We are honored to have the governor of Arizona, who is an ASU alumnus, convey the commencement address and to celebrate the remarkable accomplishments of our ASU Prep students — 100 percent of whom are graduating today and 100 percent of whom have post-secondary plans,” said Beatriz Rendon, CEO of ASU Preparatory Academy and vice president of educational outreach for ASU’s Educational Outreach and Student Services.

“We are particularly proud that more than 70 percent have been accepted to Arizona State University.” Graduates celebrate at the conclusion of the ASU Preparatory Academy-Phoenix graduation Thursday at ASU Gammage in Tempe. Photo by Deanna Dent/ASU Now

ASU Prep Phoenix is a partnership between ASU and the Phoenix Elementary School District. It offers a college preparatory curriculum for students in pre-kindergarten through 12th grade, and it has received recognition from the National Charter School Association for being one of the best schools based on academic achievement.

ASU inherited the struggling and chronically underperforming school in 2009 and has boasted a track record of academic success since opening six years ago, not unlike the governor’s successful track record in business.

After graduation, Ducey and a partner built Cold Stone Creamery from the ground up. The operation grew from a single store in Tempe to more than 1,400 in 50 states and 32 countries. He and his partner sold the franchise in 2007 when Ducey was 43 years old.

“This adventure led me to understand the true meaning of the American Dream,” Ducey said. “Attending ASU Prep over the last four years has opened more doors for you than you are possibly aware of.”

The American Dream, Ducey said, is also within the grasp of the members of the Class of 2016, who have earned more than $2 million in merit scholarships. The governor said their generation will face many changes in their lifetime and should embrace those changes rather than run from them.

“Remember there is dignity in every day,” Ducey said. “No job is thankless, and no job is less than. If your job wasn’t important, it wouldn’t exist.

“Regardless of whatever you decide to do, make sure serving others is what you do.”

ASU Prep also has a location at ASU’s Polytechnic campus in Mesa; it held its graduation at ASU Gammage earlier that afternoon. See photos of both below. 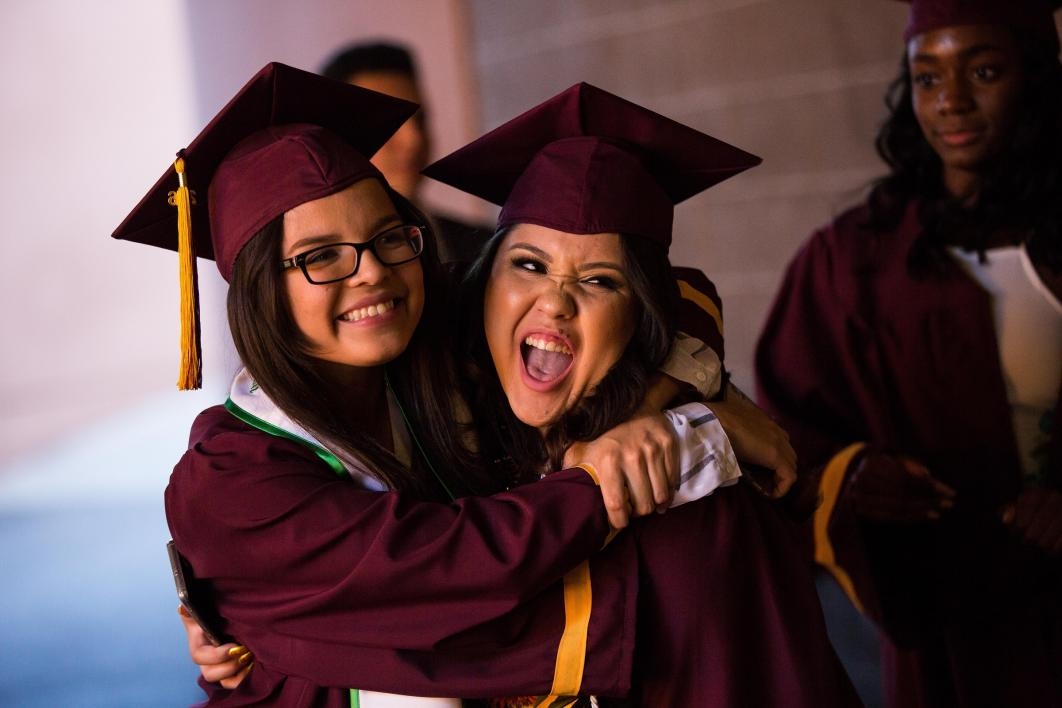 PHOENIX: Graduates Alexandra Contrades-Lacy (right) and Rebekah Alvarez-Santa Cruz hug for a photo before the start of the ASU Preparatory Academy-Phoenix 2016 high school commencement Thursday at ASU Gammage in Tempe. 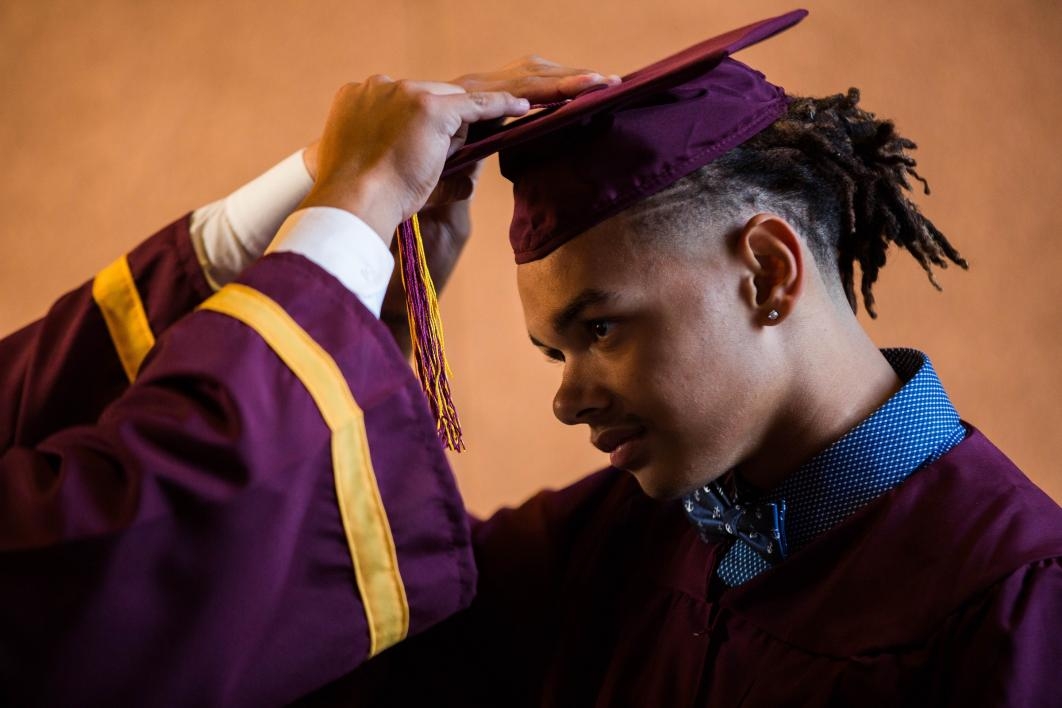 PHOENIX: Graduate Jordan Peaters has his cap adjusted before the start of the ASU Preparatory Academy-Phoenix 2016 high school commencement Thursday. 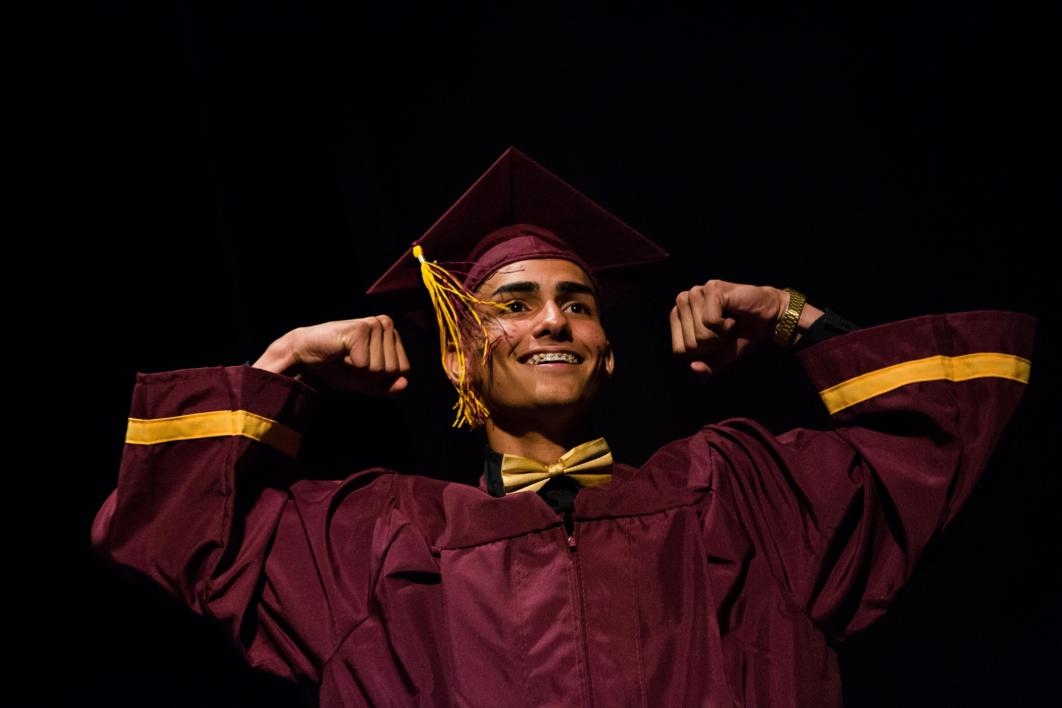 PHOENIX: Graduate Adolfo Palafox Ruvalcaba poses for his family as he crosses the stage during the ASU Preparatory Academy-Phoenix 2016 commencement Thursday in Tempe. 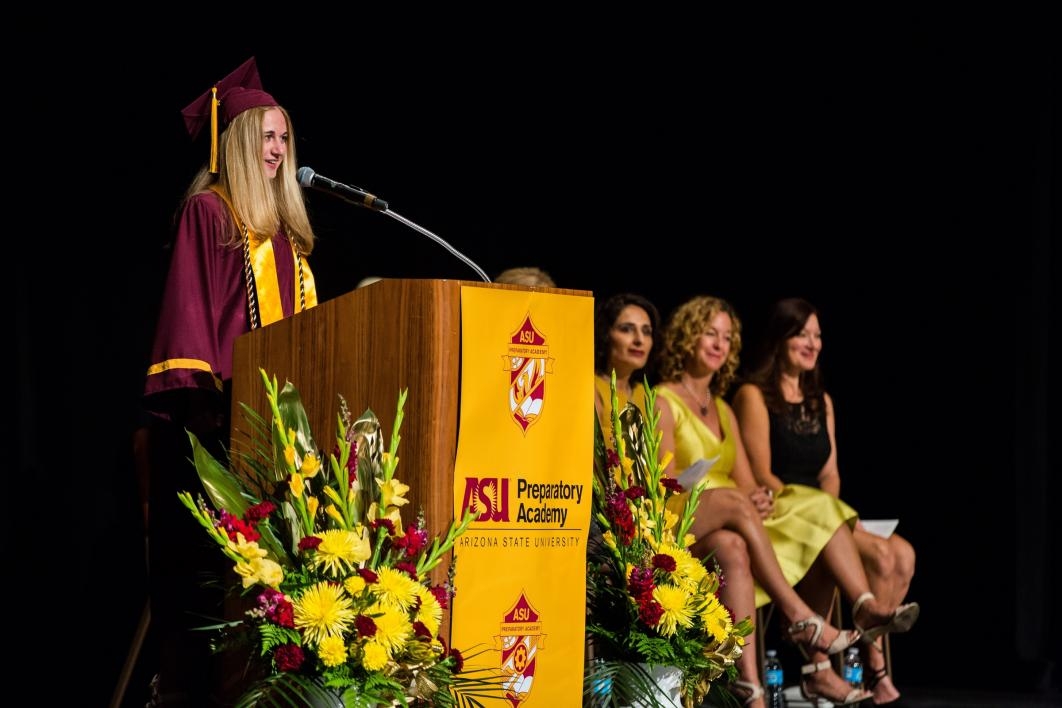 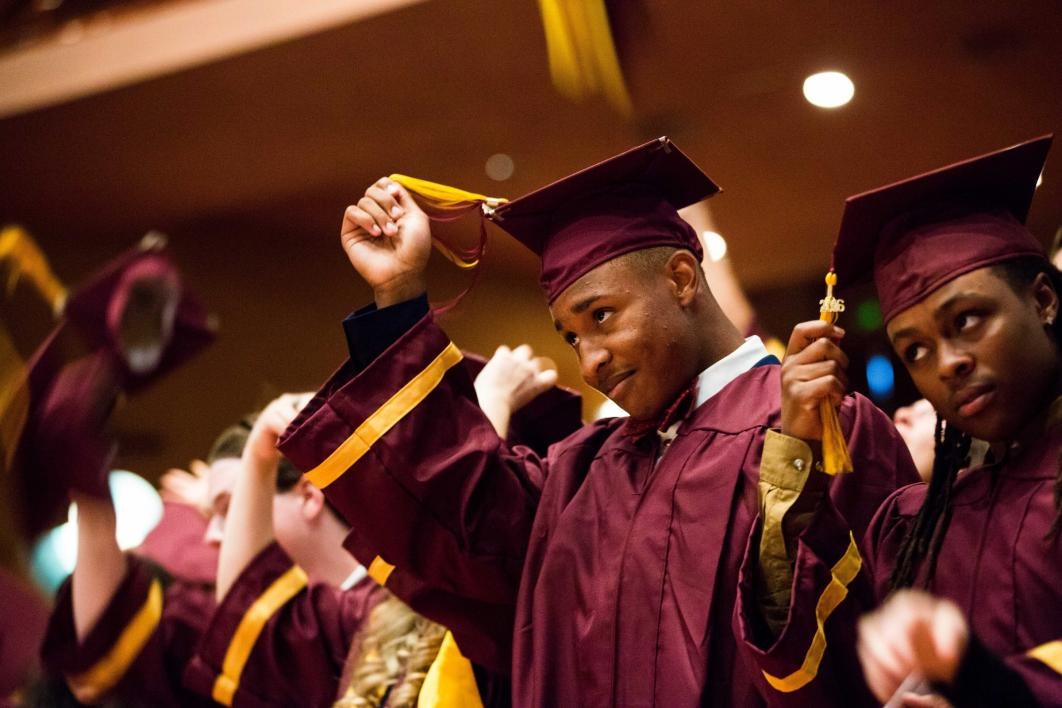 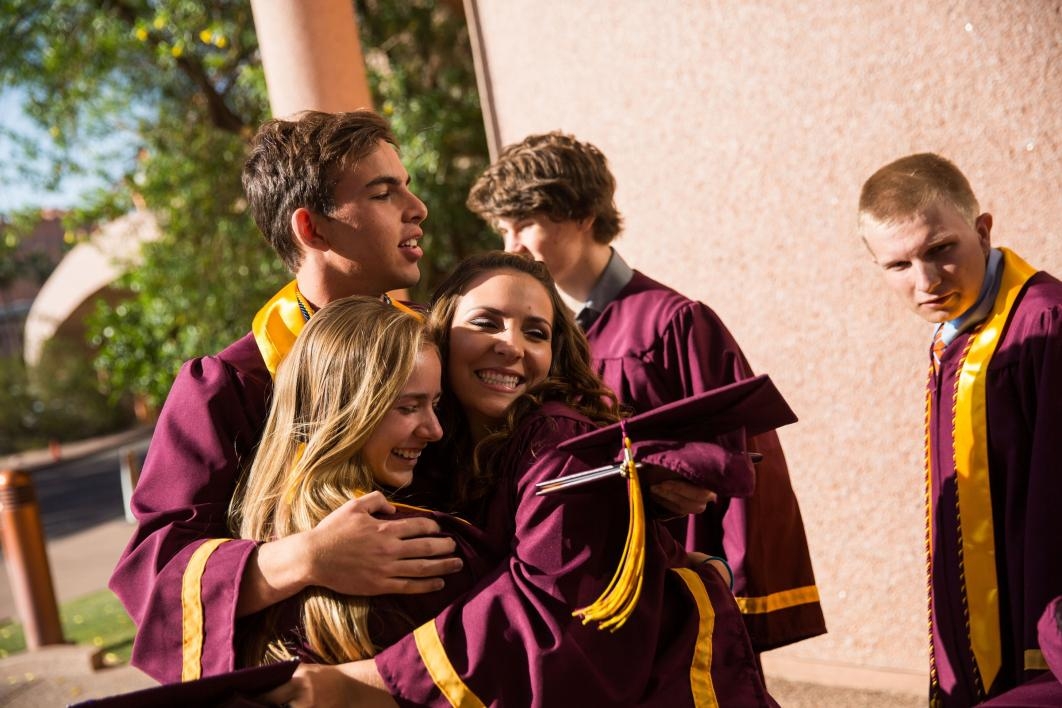 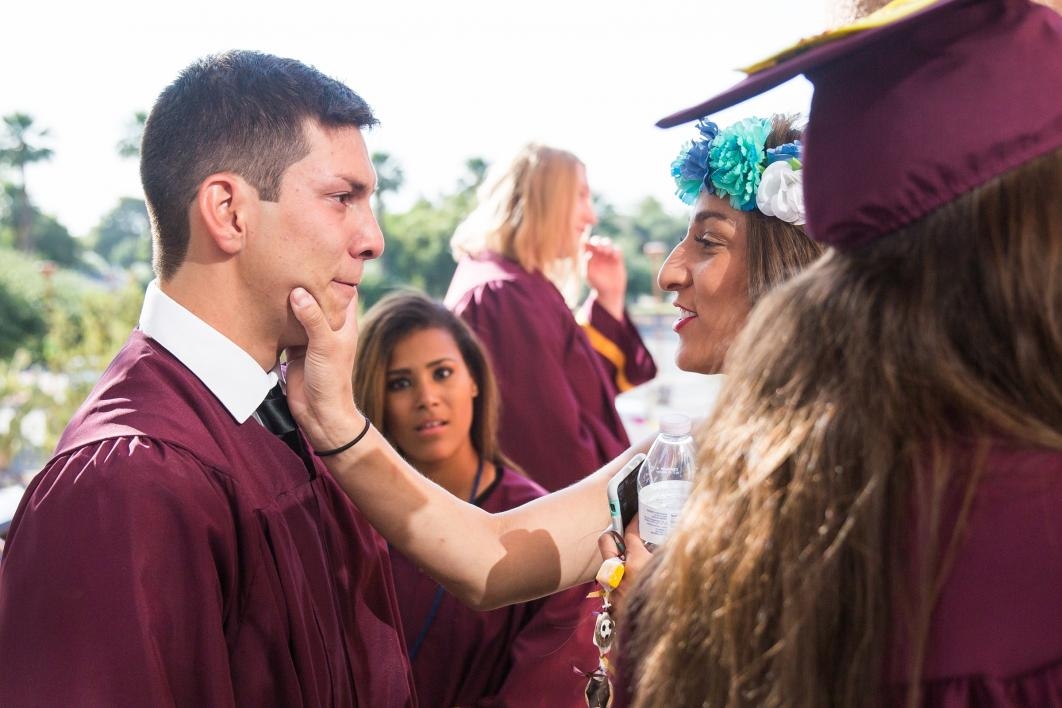 POLYTECHNIC: Jackub Ovale gets a face squeeze from his sister, Bernadette Ovale, after the ASU Preparatory Academy Polytechnic commencement at ASU Gammage. 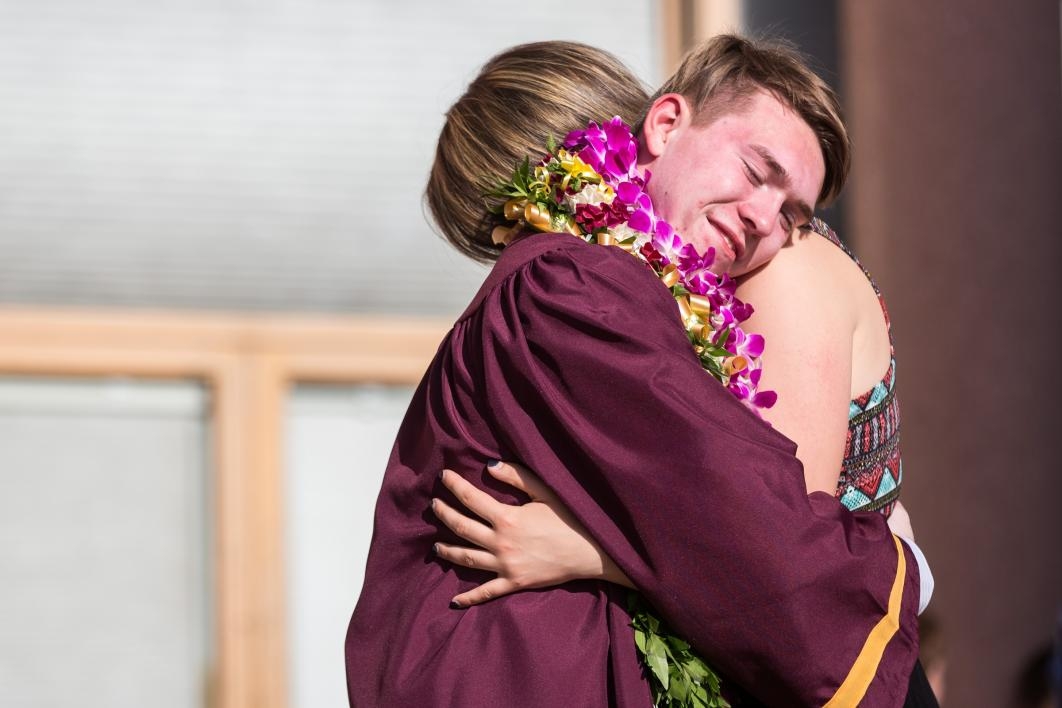 POLYTECHNIC: Tristan Tyra-Davis gets a hug from his girlfriend, Eve Shepherd, after the ASU Preparatory Academy Polytechnic on Thursday.