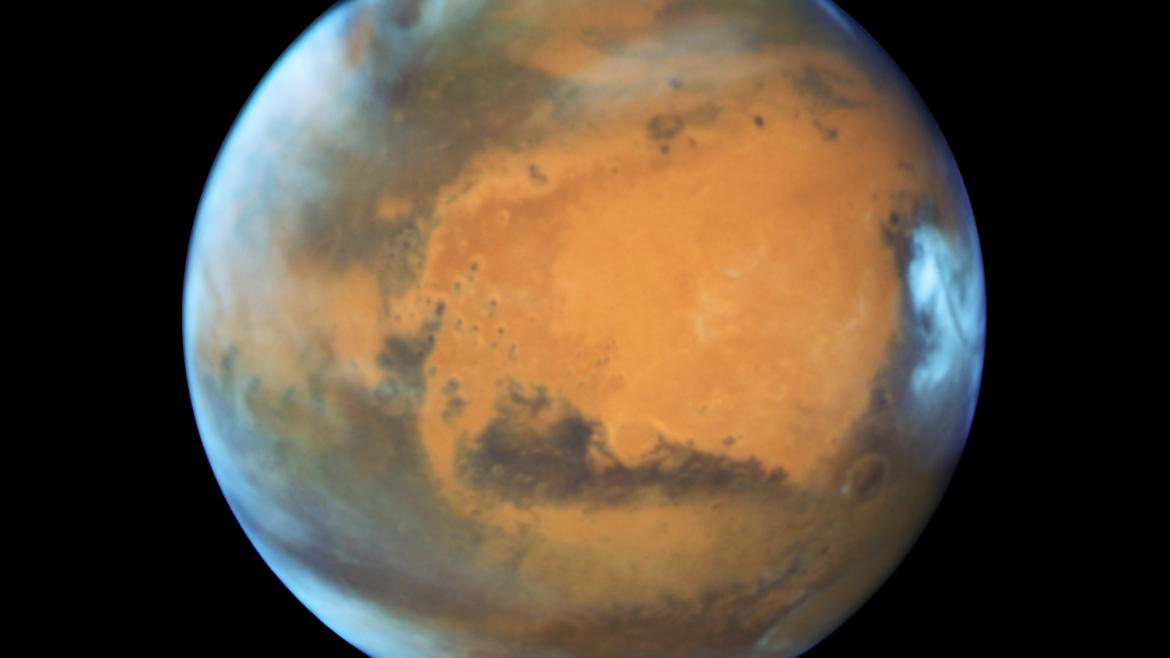 Here's looking at you, Mars

Every two years Earth and Mars reach a point in their orbits where the distance between them is shortest. That's a time when telescopes big and small, both on the ground and in orbit, turn toward the Red Planet in hopes of learning more about this dynamic neighbor world.

For the Hubble Space Telescope, an image taken May 12 and released today shows Mars in a way unseen even by the spacecraft that are orbiting the planet. The image, taken at a distance of 50 million miles, continues a series, most recently as part of the Hubble Heritage observing program, that has run unbroken since 1993.

For ASU professor Jim Bell, who helped NASA plan the Hubble observation, Mars has been part of his professional life for longer than that.

"I started observing Mars back in 1986," he said. "It was for a summer student research project, and I was trying to understand the composition of rocks on the surface."

Bell is a professor in ASU's School of Earth and Space Exploration, where his research deals with solar system geology and geochemistry. He is heavily involved in three Mars surface instruments: the Panoramic Camera on NASA's Mars Exploration Rover Opportunity, the Mastcam on NASA's Curiosity rover, and the Mastcam-Z on NASA's forthcoming Mars 2020 rover. He serves as principal investigator for the latter.

"At the time I started as a graduate student, there were no spacecraft orbiting Mars," he said, "so I was using telescopes at several observatories on the ground, in particular on Mauna Kea in Hawaii." The main instrument used was a spectrometer, which precisely measures the light reflected from a planet across a great many colors to identify its minerals.

"There were other planetary scientists at telescopes taking regular images to monitor the atmosphere of Mars — its clouds and hazes and dust storms. I was mostly interested in the composition of the surface. Because I was observing a bright, relatively nearby astronomical body and didn't need super-dark, moonless nights, I had essentially unlimited time on smaller telescopes that were largely unused." 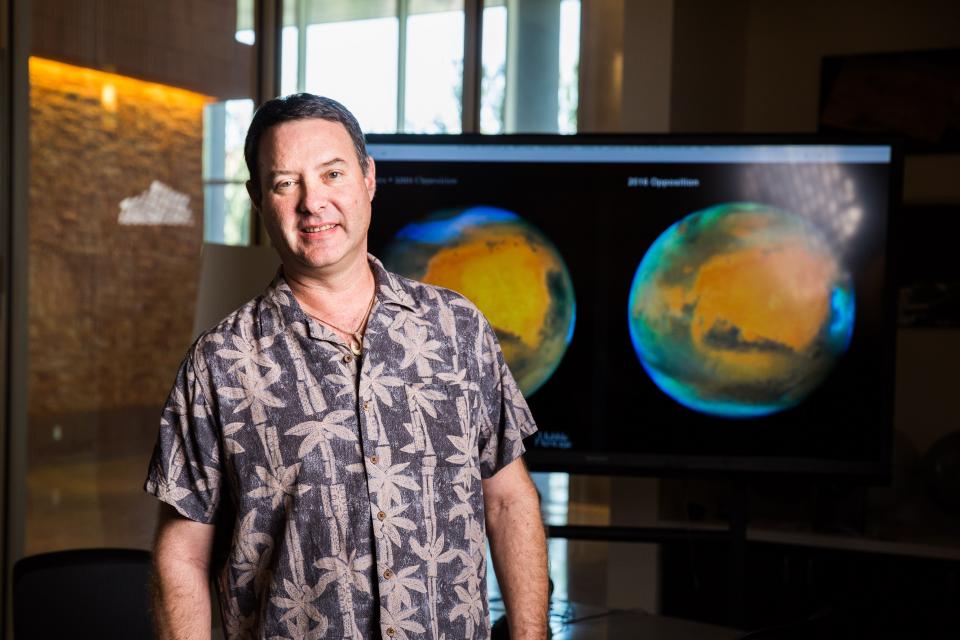 Planetary scientist Jim Bell of the School of Earth and Space Exploration finds that the Hubble Space Telescope gives views of Mars that no orbiter can provide. Photo by Deanna Dent/ASU Now

The spectrometer measured just one small spot on Mars, about the size of Arizona, Bell explains. "I could point the telescope to drive the instrument around Mars, getting spectra of various places — Syrtis Major, the polar caps, everywhere."

Later, for his doctoral work, Bell used a slit spectrometer instead of a point detector. He lined up the slit's long axis with the rotation axis of Mars and slewed the telescope across the planet, making an image. He also expanded his imaging work into the infrared part of the spectrum.

Bell said, "Mars was one of the first things Hubble looked at after it was launched. It was nearby, bright, easy to point to, and it was a popular target for the public."

At the time Hubble had a severe focus problem, fixed eventually with corrective optics. "Those early images were fuzzy and blurry," said Bell. "But if you go back to that first Mars photo, it's still better than the best ground-based imaging up to that date."

"I joined the team then," said Bell, "when few people were trying to figure out Martian rock and soil compositions. Yet Hubble's cameras and spectrometer observe at wavelengths that are great for studying the surface."

Complementing Hubble, NASA plans to launch in 2018 the James Webb Space Telescope, which will work at infrared (heat) wavelengths. Bell and others hope to use it to study Mars as well.

Two infrared telescope views of Mars, one from the ground, the other from Earth orbit. Both are oriented similarly, with the north pole at about 11 o'clock. Bell used NASA's InfraRed Telescope Facility in Hawaii with a slit spectrometer to make the left image. The right image was taken by the Hubble Space Telescope. The large dark feature in the northern hemisphere is Acidalia Planitia. 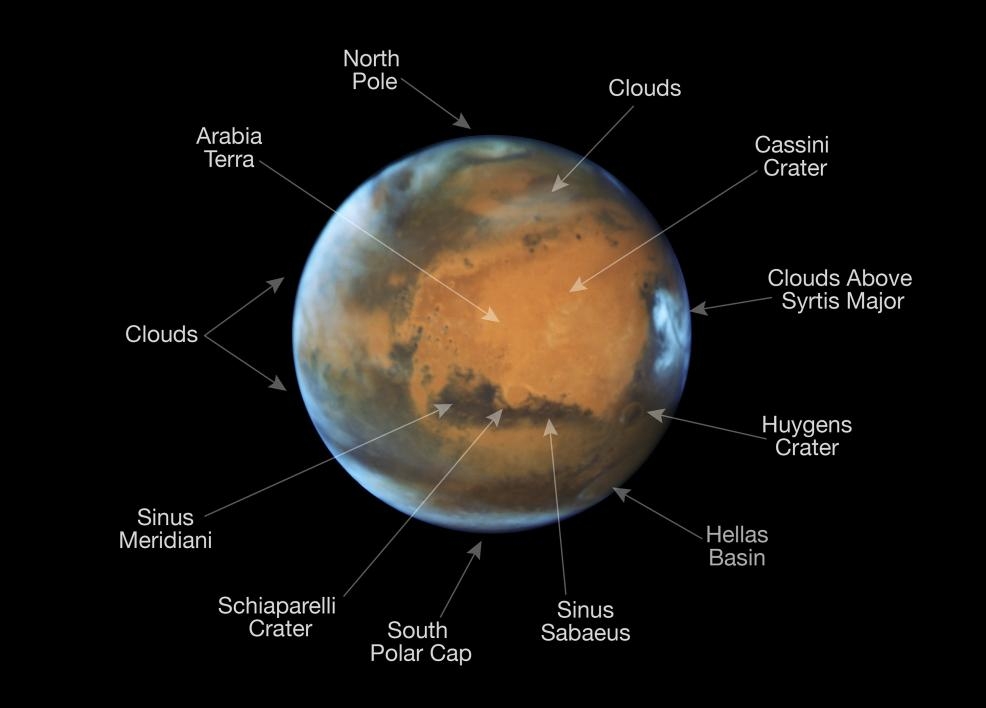 The latest image from the Hubble Space Telescope, centered on Mars longitude 348°, identifies features on the ground and in the atmosphere. This image covers an area somewhat to the east of what is shown in the previous IRTF-HST pair. But because they overlap partly, a sharp eye can spot features seen both here and on the previous pair of images. 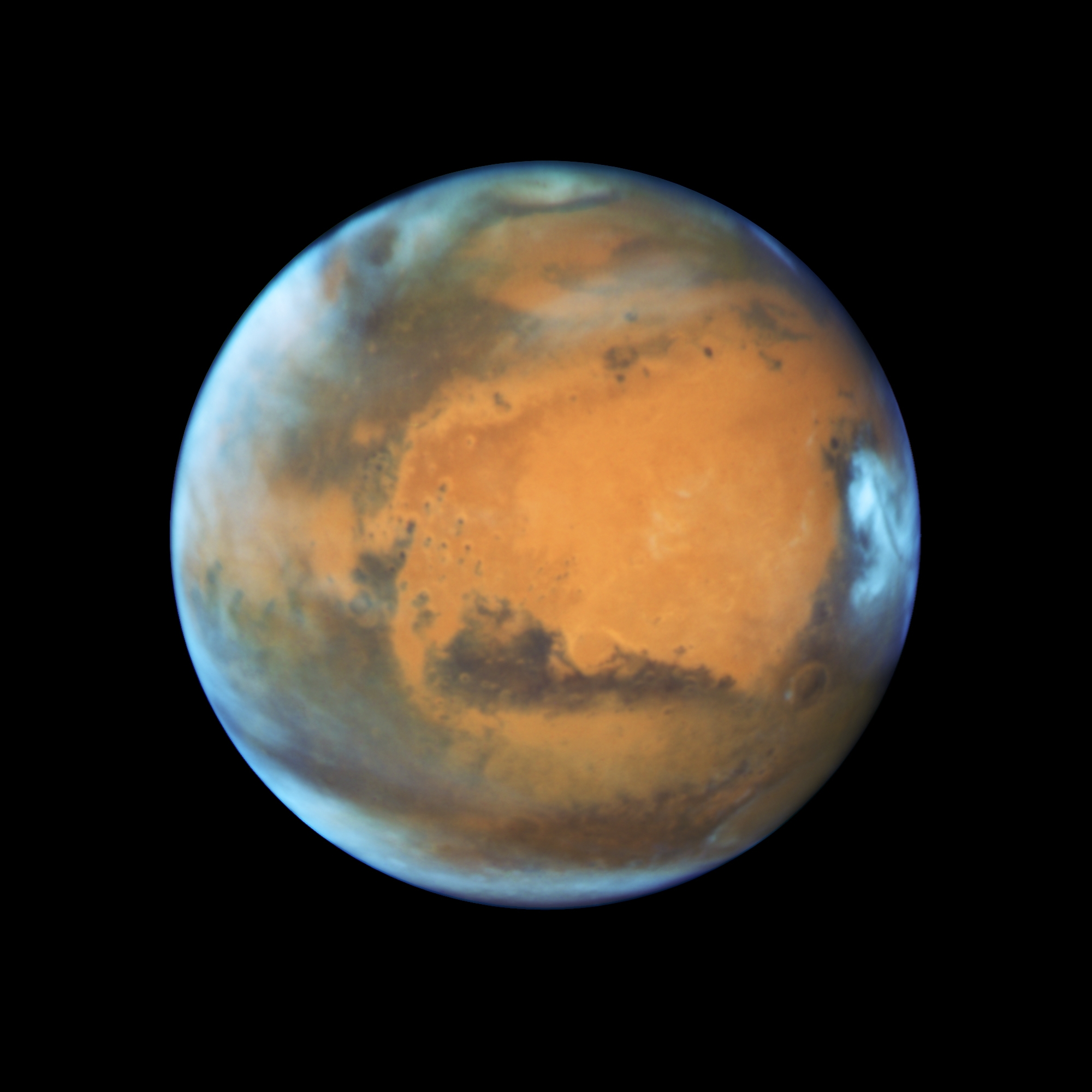 The new Mars photo, without annotation (also seen at the top of this story). The Red Planet is a dynamic world with seasonal changes, shown by its frosty polar caps and water-ice clouds that float above a rusty-colored landscape. This NASA Hubble Space Telescope view was taken on May 12, when Mars was 50 million miles from Earth. The smallest details in the image are 20 to 30 miles across.

"The software has been written to let it track on Mars, so Mars will be part of its observing program, too," Bell said.

Although Hubble's Mars is not as detailed as images from NASA's Mars orbiters, Bell said, it provides an "all-day" view no orbiter can give.

"Orbiters at Mars follow paths that take them over the ground at a fixed time of day, such as mid-afternoon," he said. "With lots of images, these can be stitched together into a somewhat artificial view that shows Mars at mid-afternoon all the way around the planet.

"But Hubble's view shows a Mars that has morning, noon and afternoon all in one shot. It lets us see hazes and clouds and other atmospheric features that come and go at times of day that the orbiters are not studying."

Bell's scientific work has taken him on a journey from the classical kind of telescopic Mars observing to driving rovers across the planet. He said, "It's been fascinating going from the telescopic world, where we're looking at fuzzy regions the size of entire states, to where we're now drilling into rocks on the Martian surface to study the detailed habitability of the place."

ASU's School of Earth and Space Exploration (SESE) stands at a pivotal point, he said. "The experience and expertise of my colleagues in SESE, from astronomers to geologists to planetary scientists, working closely with engineers, makes for a great parallel to the heritage and history of Mars exploration.

"Telescopes are still doing valuable Mars observing, along with spacecraft studies. It would be great if we could do a similar transition for all the planets, moons, asteroids and comets in our solar system!"

Evolution and religion: New insight into instructor attitudes in Arizona

Evolution can be an emotionally charged topic in education, given a wide range of perspectives on it. Two researchers from Arizona State University are taking an in-depth look at how college professors handle it. In a first-of-its kind study, scientists from Arizona State University's School of Life Sciences have found that a majority of professors teaching biology in Arizona universities do not ...

Evolution and religion: New insight into instructor attitudes in Arizona

Evolution can be an emotionally charged topic in education, given a wide range of perspectives on it. Two researchers from Arizona State University are taking an in-depth look at how college professors handle it.

In a first-of-its kind study, scientists from Arizona State University's School of Life Sciences have found that a majority of professors teaching biology in Arizona universities do not believe that helping students accept the theory of evolution is an instructional goal. In fact, a majority of study participants say their only goal is to help students understand evolution. 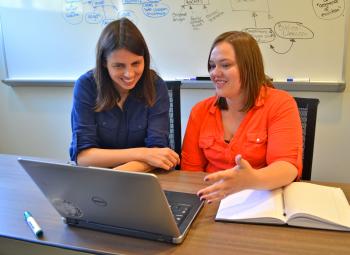 According to the study’s authors, this finding was surprising. The exploratory research, published May 18 in the scientific journal CBE—Life Sciences Education, looked at how instructors perceived their role in helping students accept evolution. It also looked at the extent to which professors address the perceived conflict students may have between religion and evolution.

“Evolution is one of the key concepts in understanding biology,” said Sara Brownell, senior author of the study and assistant professor with the school. “My own view is why would we want to teach evolution, if we don’t want our students to accept it? We teach them that cells have membranes and we expect them to accept that. Why should evolution be any different? Yet instructors in our study don’t see it that way. For most of them, evolution is separated — first, in understanding and second, in accepting the concept.”

In biology education, evolution and religious beliefs are often “hot-button” topics that play out publicly in the media as an “either/or” scenario, in which one side wins and the other loses. This, according to the ASU researchers, may negatively affect students who have religious beliefs. Previous outside studies show that more than 50 percent of undergraduate biology students identify themselves as religious.

Yet, this study shows most instructors in Arizona neither acknowledge their students’ religious beliefs, nor discuss that there are a variety of beliefs about science. And the study shows a majority of instructors are hesitant to discuss the topic in class.

“Whether acceptance of evolution is the goal may depend on what you define acceptance to be. If you define accepting evolution as rejecting a belief in God, then that may not be an appropriate goal,” said Elizabeth Barnes, co-author of the study and a graduate student in Brownell’s lab. “While evolution is the basis of biology, evolution and religious beliefs do not have to be in conflict. Science answers questions about the natural world, about things we can test. Science does not have a test for whether God exists or had a role in planning how life unfolded.” ASU researchers have found that a majority of professors teaching biology in Arizona universities do not believe that helping students accept the theory of evolution is an instructional goal. In fact, a majority of study participants say their only goal is to help students understand evolution. 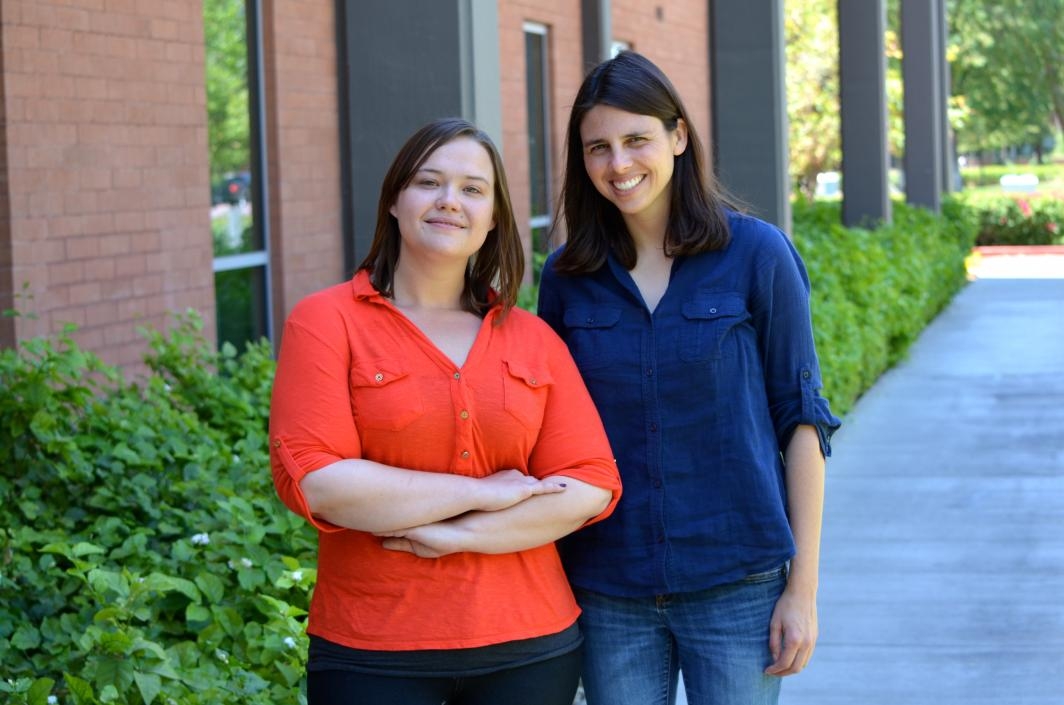 Brownell and Barnes said the study revealed additional important points. It showed that many instructors perceive barriers, such as lack of training or context of the coursework, that cause them to avoid talking about evolution and religion in the classroom. Additionally, personal beliefs about the role God plays in evolution seem to impact what they are actually teaching. Many instructors say they believe evolution and religious beliefs are in conflict, so rather than discuss this with students who may be religious, they stick to only teaching facts about evolution.

“Many science instructors believe they can simply give facts about evolution, but research has shown that we have to attend to the emotional components and religious beliefs our students have,” said Barnes. “Clearly, this is not a black-and-white issue. We have to come together in the middle somehow — no more extremes,” added Barnes.

This study included instructor participants from ASU, University of Arizona, Northern Arizona University and 10 Arizona community colleges. It included professors who identified themselves as agnostic and atheist, as well as Catholic, Jewish, Protestant and “questioning.”

Brownell and Barnes said the next step is to investigate this issue on a national level. This study focused on professors teaching biology in Arizona, which is listed in a 2013 Gallup poll as being in the lower one-third of religious states in the U.S. The pair is currently studying how religious students in the classroom perceive the topic of evolution and religion. They are also investigating what instructors and students believe “acceptance” to mean in regards to evolution.