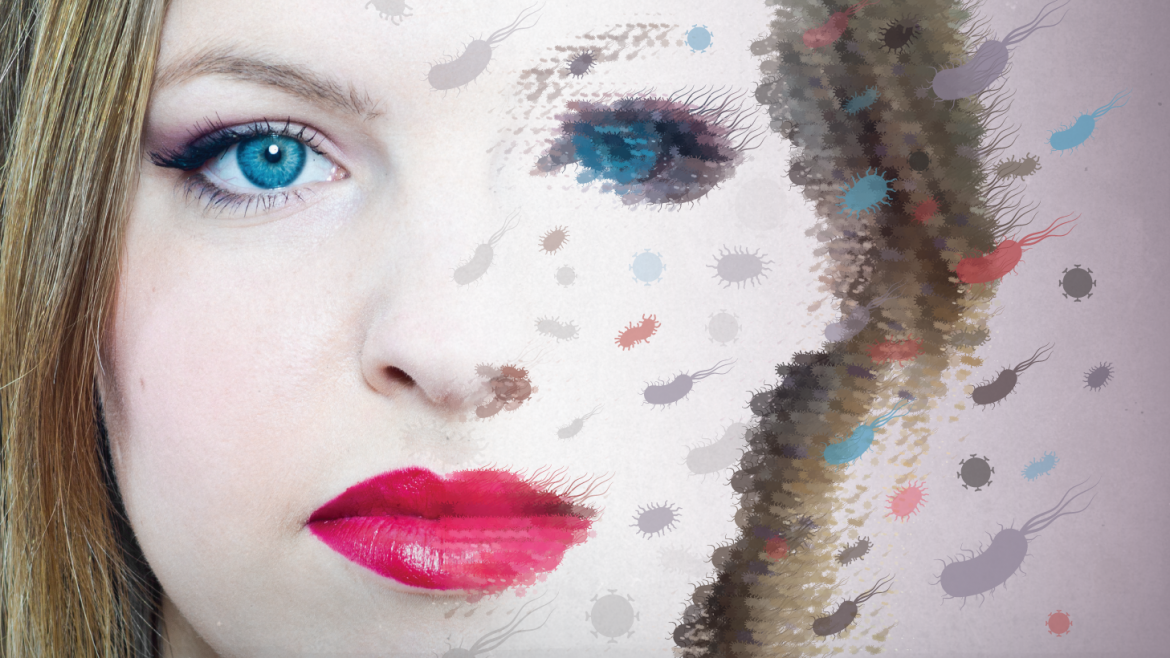 The next big thing for the human microbiome

#ASU, White House collaborate to investigate mysteries of microorganisms
My microbiome made me do it: #ASU studies link between microbes and humans
May 13, 2016

The White House Office of Science and Technology Policy announced today a new National Microbiome Initiative to foster the integrated study of microbiomes across different ecosystems.

Ferran Garcia-Pichel, dean of natural sciences in Arizona State University’s College of Liberal Arts and Sciences, attended the event in Washington in his role as founding director of ASU’s Biodesign Center for Fundamental and Applied Microbiomics, which was launched in concert with the White House’s new initiative. The center will bring together researchers from diverse fields to identify the basic governing principals of microorganisms and how they may affect health, food production, climate change, forensics and other issues.

We asked Garcia-Pichel to explain microbiomes, from where they come, the reasons they are important and why it is the right time to studying them more closely. Video and text below.

Question: What is a microbe?

Answer: The microbeNote: A microbiome is the collective ecological community of microbes that reside in an environment, like a human body, a desert or a river. part is really easy. It is a living organism that you cannot see with your naked eye.

Q: Where do microbes live?

A: They live everywhere. You cannot find a place easily without any microbes. Microorganisms cover what we call the fringes of habitability.

What’s the hottest temperature in which a microorganism can live? It’s a 121 degrees. The first large organism you could see, you’d probably have to go down to about 45 or perhaps 50 degrees Celsius, so there’s a 70 degree difference in which only microbes inhabit.

Q: If microbes live on humans, from where do they come?

A: That’s an interesting question. We don’t quite know in all cases where microbes come from or if there is a single answer in all cases. We know, for example, that microbes in the human microbiome do not necessarily get transmitted directly from mother to child.

There is a certain dynamic of interactions between ourselves and our environment so that what we call a “succession” occurs where eventually our organism gets seeded with the right kinds of microbes that create a stable environment.

Q: If a microbe lives in me, is what’s good for it also good for me?

A: Not necessarily. Within microbes, like in good movies, there’s all sorts of characters.

Most microbes are beneficial. We evolved together, we learned to live with each other, and we learned to what we call in biology, “have a symbiosis.” But sometimes, some of them do things that ae not so good, and they are what we call pathogens. Some microbes actually take advantage of the host in a way that is only beneficial to them and detrimental to the host. Those are microbes we call “germs,” and those are the ones that cause disease and are the ones we tend to fight.

Perhaps what’s coming to the fore now is that people are realizing, “Huh, maybe we can now understand ourselves and our environment with our understanding of the part of our world that surrounds us, that’s sort of hard to focus on because we can’t see it. But it’s important.”

Q: Why is it important for researchers from different fields to work together to understand microbiomes?

A: Like in most areas of science, we are trained in a particular area, and we’re good at that. We’re not very good at thinking with the mindset of other disciplines. That’s where bringing people from different areas of science together with a common mission can be very successful. ASU has been extremely successful in gaining a foothold in those interdisciplinary areas that nobody has claimed, so we thought that gave us an advantage.

Let me give you an example. [The complexity of microbiomes] is very hard to do for a microbiologist alone, like myself. So perhaps it would be a good thing to team up with bioinformatician and an applied mathematician to see if we can create some parity out of the complexity. I will make sure that they get the biology right. They will make sure that I get my complexity straightened into what’s simple. What’s important is how we put that together into something that attains predictability.

Q: Why is this only now emerging?

A: Beats me! This is what I’ve done my whole life. And yet, it came as a surprise when it started breaking through that the impact of our own microbiomes was really important in our own health — that’s the part that’s really new. Of course, as humans we worry about our own health, so that has come to the fore. Now, more and more disciplines are realizing it. I think that’s what’s been happening in the last decade or so.

The other thing that has also helped has been techniques. What has changed in the last 20 years or so is we have developed methods for High-Throughput Sequencing. Essentially, we can get lists of [what’s in a microbiome] by looking at what we call the community DNA. We go into a soil or we go into a plant root or we go into human feces and we sequence all the genes of all the bacteria and then we get a listing of what is there.

Q: What research is ASU doing on microbiomes?

The center will be called the Center for Fundamental and Applied Microbiomics. It brings together this idea of wanting to get the fundamentals of how microbial communities work; meaning, those common rules that would apply generically to all groups and would predict the emerging properties from the sum of the parts. Very much like ASU, we would like to push the applied — the relevant immediacy — of our research for our everyday life.

Q: Can you tell us about the need to coordinate this research on a national level and beyond?

A: Microbiomes are everywhere. It is endless! We can start talking about our own microbiomes, the diversity of microbiomes, the diversity between human microbiomes in children versus older people versus sick people — there’s a diversity in every aspect of microbiomes. There is no way that one single institution can tackle the whole complexity of microbiomes. The task is daunting. That’s why we need to really tap into finding this common thread that goes through microbiomes because that’s going to give us the most bang for the buck. At the same time, there may be important things that need to be developed and there’s really room for a lot of people here. So I think that it’s not just a national initiative that will be needed but also an international one, and some of it is brewing both in the U.S. and in Europe — and I think others will join really soon.

“I too am not a bit tamed — I too am untranslatable; I sound my barbaric yawp over the roofs of the world.”— Walt Whitman, from “Leaves of Grass”Need an enriching, arts-based summer activity for your children? Look no further than ASU’s YAWP.The Arizona State University Young Adult Writing Program (YAWP — formerly “rl txt”) is designed to offer young writers a non-evaluative...

“I too am not a bit tamed — I too am untranslatable;
I sound my barbaric yawp over the roofs of the world.”
— Walt Whitman, from “Leaves of Grass”

Need an enriching, arts-based summer activity for your children? Look no further than ASU’s YAWP. 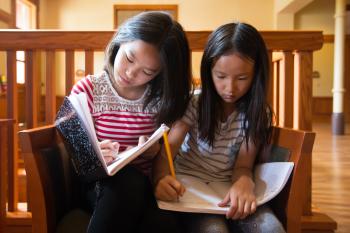 Sisters Ziqing Kuang, 10, and Christina Kuang, 7, share a chair in Old Main as they write short pieces about the building as part last year's youth writing program at ASU. The Department of English at ASU offers a two-week summer youth writing camp for students in grades 3-12 on the West, Tempe and Polytechnic campuses. Photo by Charlie Leight/ASU Now Download Full Image

The Arizona State University Young Adult Writing Program (YAWP — formerly “rl txt”) is designed to offer young writers a non-evaluative environment in which to explore the power of writing. The program is accepting applications from kids in grades 3-12 for its two-week sessions beginning in June.

A component of the Central Arizona Writing Project, which is a local site of the National Writing Project, YAWP sessions engage young writers in crafting a variety of writing forms, such as poems, autobiographical sketches, heart maps, short stories, arguments, nature/science observations, craft secrets and daily writing workshops. Each camper chooses a piece of writing for publication in the camp anthology.

Offering time and inspiration, YAWP sessions support writers in a collaborative atmosphere as they interact with other youth authors and share works in progress.

“This year’s Young Adult Writing Program will take full advantage of our dynamic and innovative university and local writing community,” said Jessica Early, an associate professor in the Department of English and director of YAWP.

“Our young writers will visit and take inspiration from ASU’s Marston Exploration Theater 3-D Astronomy Show, Hayden Library, the ASU Art Museum and many more campus venues. They will also take part in writing workshops taught by our incredible instructional team as well as ASU professors and Arizona novelists, poets and songwriters.” 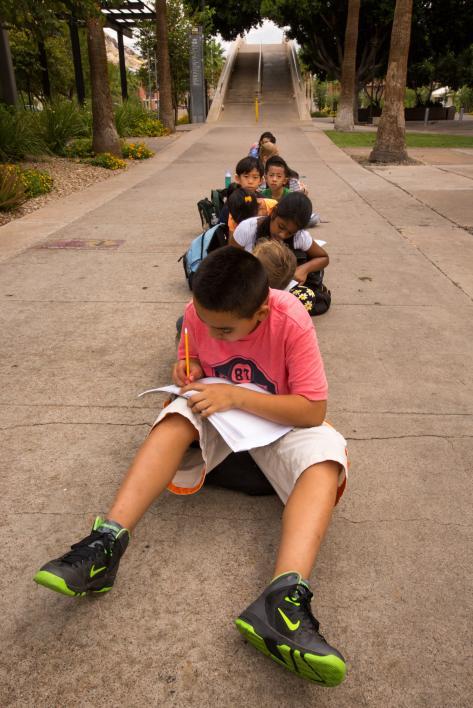 As they sit and reflect on Palm Walk, with 10-year-old Javier Mendez in front, 13 third- through fifth-graders participate in a writing marathon at the Tempe campus June 5, 2015. The Department of English at ASU offers two-week summer youth writing camps for students in grades 3-12 on the West, Tempe and Polytechnic campuses. 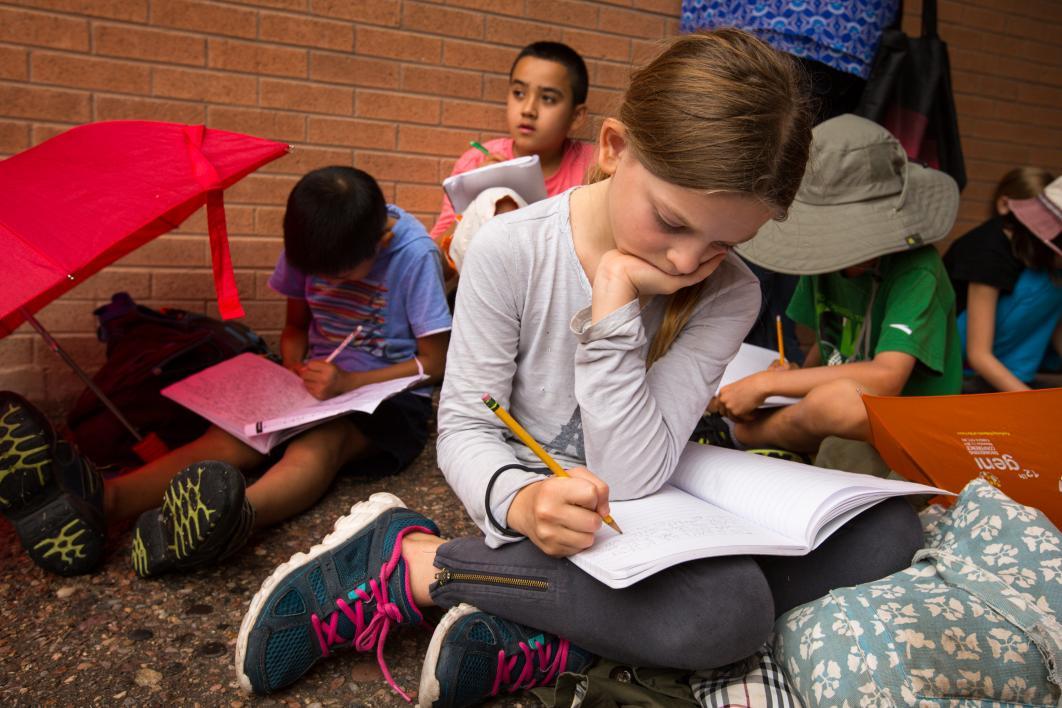 Eight-year-old Tamsin Hurlbut writes her thoughts after walking over the University Bridge on ASU's Tempe campus during the 2015 session of YAWP (then named "rl txt").

YAWP 2016 is offered Mondays-Fridays, from 9 a.m. to noon daily, in four sessions on three ASU campuses. Parents choose just one in which their children will participate:

Registration closes May 20. Tuition is $300 and is due at YAWP orientation on May 25 on the Tempe campus. Visit the program’s website for more information or to download an application.