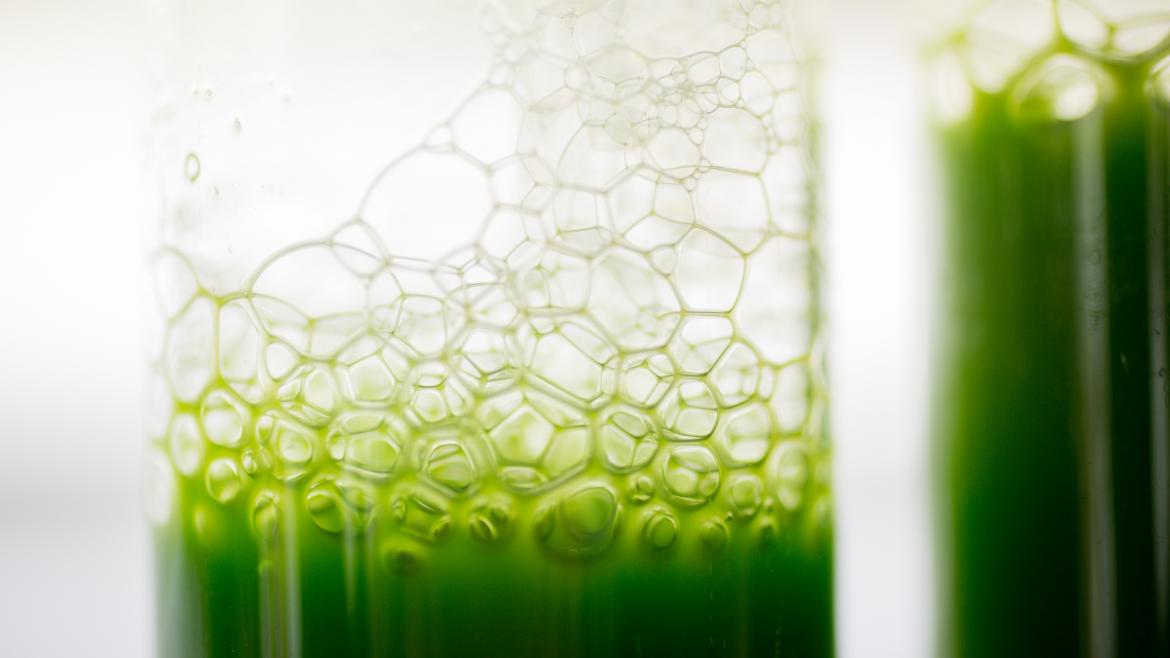 The Wizard of Ooze

Polytechnic campus
Algae as fuel, fertilizer and food — for animals AND us? ASU prof thinks so.
It's not easy being green — but algae could be a major player in sustainability.
May 11, 2016

Milton Sommerfeld can see the future in puddles.

One of the nation’s top experts on algae, Sommerfeld has spent almost 50 years cracking dozens of uses for the plant. In Sommerfeld’s future, you will fill your tank with it; feed it to livestock; fertilize crops, lawns or flowers; clean up wastewater with it; and eat it.

One of the best strains he ever found was in a puddle after a storm in Phoenix.

“We picked it up and it started growing, and it produced over 50 percent of its weight as oil,” Sommerfeld said. “You never know where you’re going to find an algae strain that has value for a different type of product.”

There are about 75,000 different types of algae, ranging from microscopic specimens to kelp a hundred feet long and as big around as a baseball bat. It can look like lime Kool-Aid, black or brown crude oil, or hearty burgundy.

“It’s a very broad-spectrum use,” said Sommerfeld, professorSommerfeld is a professor in the Environmental and Resource Management Program in the Polytechnic School, which is part of the Ira A. Fulton Schools of Engineering. Sommerfeld is also a senior sustainability scientist in the Julie Ann Wrigley Global Institute of Sustainability. in the Polytechnic School and co-director of the Arizona Center for Algae Technology and Innovation.

“The focus has been on biofuels,” he said. “It’s believed that the petroleum we take out of the ground had its origin in algae millions of years ago. If you look at the chemistry of algae oil, the lipids, it pretty much matches petroleum. Anything you can use petroleum for, you can pretty much use algae oil. That means not only fuel in terms of diesel, gasoline and jet fuel — you also have the specialty products that can be made, like plastics and so on.” 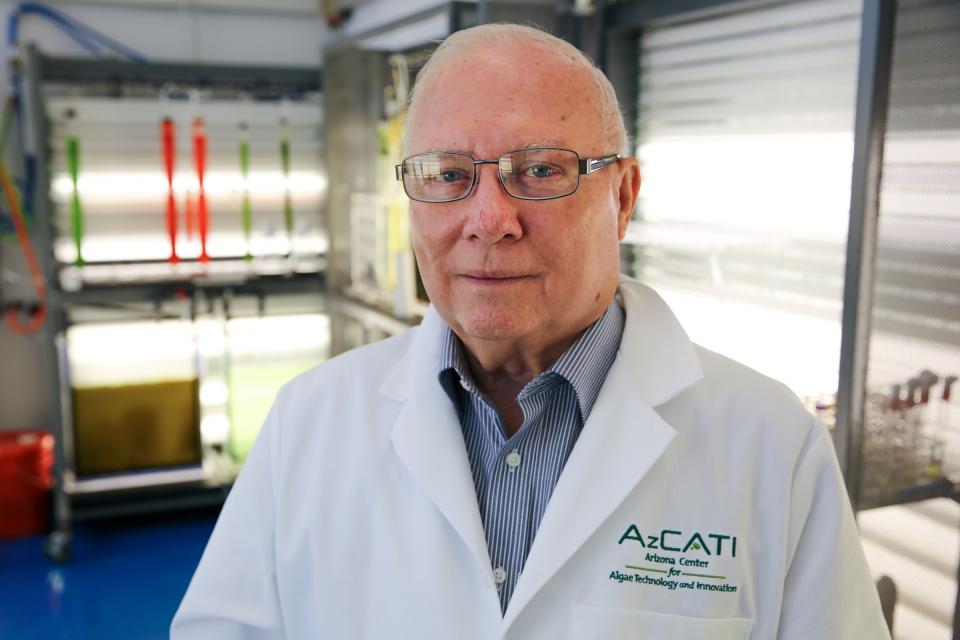 ASU professor Milton Sommerfeld is co-director of the Arizona Center for Algae Technology and Innovation. He has studied algae for 48 years and says there is much yet to be discovered. Photo by Ken Fagan/ASU Now

Algae has some surprises in its membranes, like Omega-3 fatty acids, which are believed to help cardiovascular health, among other benefits. Omega-3 is usually referred to as a fish oil. It’s actually an algae oil. Algae oils will eventually replace Omega-3 supplements found in health-food stores.

“The fish have simply accumulated them by eating little animals that ate algae,” Sommerfeld said. “We always say, ‘Let’s cut out the middle fish and go right to the algae for those specialty products.’ ... We just haven’t used the algae to its fullest extent. More and more people are looking at the algae as the source for some of these specialty products that actually now comes from a plant source.”

Sommerfeld grew up on a farm in Texas. His father made him clean the algae out of the cattle trough. Every week, he cleaned it out. Every week, it came back.

“I kept wondering why it grew so fast,” he said. “That was how I first related to the algae.”

One of the major focus areas of Sommerfeld’s lab is how to relate algae to the water-energy-feed nexus. Algae can be grown in dairy wastewater or in sludge from water treatment plants, stuff that’s usually trucked to landfills. Grow algae in that, take out the oil, and you’re left with a nitrogen-rich biomass perfect for fertilizer.

“It’s high-protein,” Sommerfeld said. “Now you have a high-protein source for animal feed, or even potentially human food.”

The biggest immediate impact from algae will be bioremediation — cleaning up environmental threats — and producing specialty chemicals, according to Sommerfeld.  Why not fuel, if it’s so readily extracted? Sommerfeld has cooked up biodiesel in his lab from algae. Why hasn’t ExxonMobil built giant ponds?

The problem is taking algae farming to a large scale. Most work with algae has been at small scale, although some people have tried unsuccessfully. There are huge challenges in introducing a new crop to industrialized agriculture.

“Just think about trying to introduce a new crop at large scale,” Sommerfeld said. “We don’t do that now.

“If you look at our crop plants, they started on small farms and got bigger and we learned how to do it and got bigger machinery and bigger this and bigger that, all kinds of improvements in seed because through a different process because there was a big market for food or whatever you get out of the grain.

On a four-acre site directly across the street from Sommerfeld’s lab on ASU’s Polytechnic campus in Mesa, he is working on bringing algae cultivation to a production scale. In the baking sun sit racks of panels with algae bubbling in them and long test beds lined with white plastic where mill paddles churn scarab-green and wine-dark water. Four years ago the U.S. Department of Energy invested $15 million to find out how to grow algae outdoors in a production setting.

There’s a lot more to it than simply transferring what you did inside in a test tube to a 300,000-liter test bed outside. Sometimes that works, Sommerfeld said. Sometimes it doesn’t.

“One of the things that happens we’re finding when we started to begin to scale up and do it outdoors, it’s that there are a lot of little animals that get in,” he said. “We have the same kinds of problems that farmers have with insects.

“Now you have these creatures that blow in with the wind and the dust storms, and they love to eat the algae. They cause what we call algal crash. All of a sudden the cells begin to come together and turn brown and settle down. It’s sort of like they’re dead, and you have to almost restart the system, which is very expensive on a large scale. One of the things we’ve been doing recently is really trying to detect and identify those organisms and look at how do we control them like insects. We’re having a little success in doing that.” 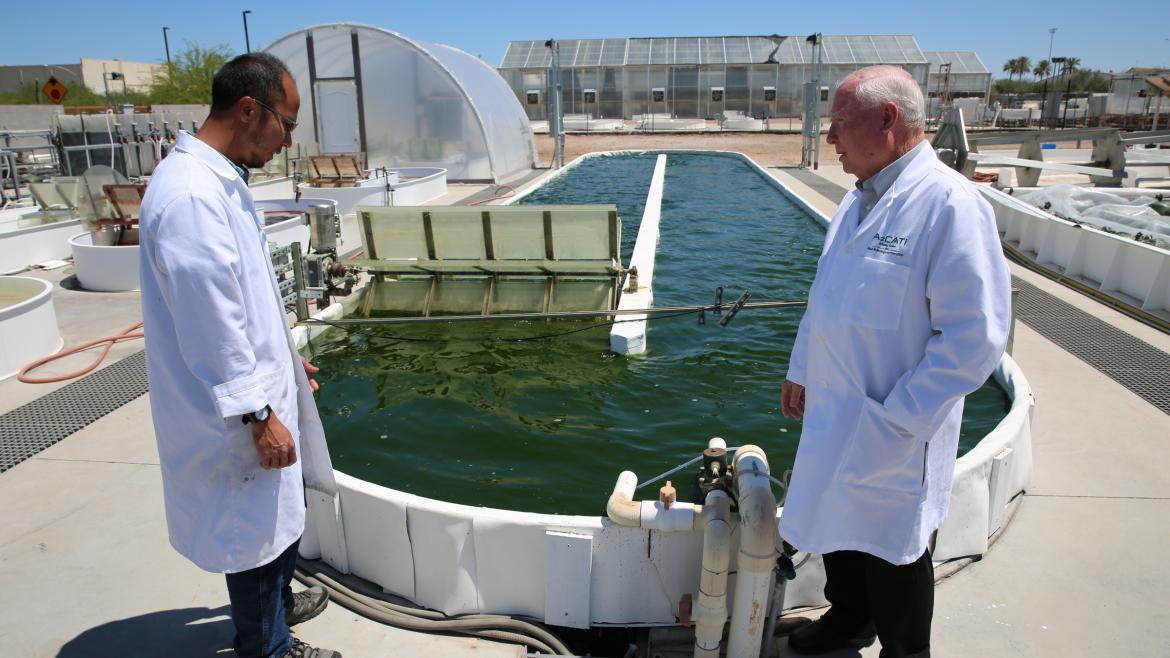 Dr. Emil Puruhito (left) and Dr. Milton
Sommerfeld stand by one of the algae
research ponds at the Arizona Center
for Algae Technology and Innovation
at the Polytechnic campus.

Controlling crashes can be done physically or chemically. Sommerfeld’s lab works on both, but leans towards chemical solutions.

“The treatment for different organisms is different,” he said. “We’re trying to sort that out. ... It’s like anything else. If a farmer detects boll weevils, he sprays and then inspects again. ... You look for resistant species. Then you look at it, OK, this is one we really want to grow. Now how do we keep it in a viable way?”

Despite a lifelong fascination with the plant and 48 years studying every facet of it, much remains to be learned.

“One of the great things about science is every time you think you know something, you really do, but there’s another question out there that leads to something interesting,” Sommerfeld said. “You’re never at the end point.”

A noteworthy gift of music

Jason Sipe’s largesse is as big as a grand piano — each year, the ASU alumnus raises money with an annual piano sale and keeps the School of Music’s practice rooms full of the sounds of tinkling ivory.It’s his way of saying thank you for the music and to show his gratitude towards his alma mater.Sipe, who graduated from the School of Music in the Herberger Institute for Design and the Arts... 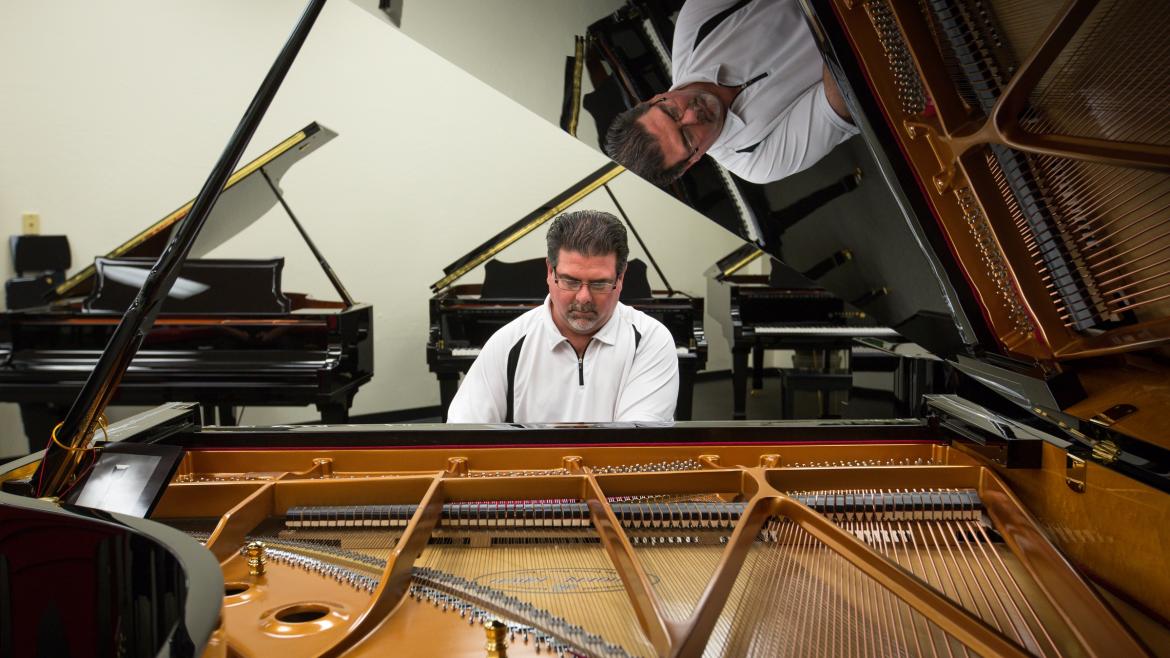 A noteworthy gift of music

Jason Sipe’s largesse is as big as a grand piano — each year, the ASU alumnus raises money with an annual piano sale and keeps the School of Music’s practice rooms full of the sounds of tinkling ivory.

It’s his way of saying thank you for the music and to show his gratitude towards his alma mater.

Sipe, who graduated from the School of Music in the Herberger Institute for Design and the Arts in 1993 with two degrees, said music professor Walter Cosand changed his life nearly a quarter-century ago by giving him a scholarship and, later, offering sage advice.

“I was contemplating a career as a music instructor or owning my own piano store,” said Sipe (pictured above), who recently celebrated his 25th anniversary as the owner of AZ Piano, the largest retailer of pianos in the Southwest United States.

“Walter is a straight shooter and is very direct. He looked at me and said, ‘How many people own a piano store? You should give it a try.’ He saw something in me that I didn’t even see in myself.”

Sipe never forgot that kindness and began giving back to ASU in several ways. Each year since 2006, he provides, free of charge, more than $200,000 worth of pianos to the School of Music to ensure student practice rooms and a handful of teaching studios are equipped with quality pianos.

He also hosts an annual piano sale at the end of each school year at deep discounts — first to the ASU community and then to the general public. A share of the proceeds from the sale goes toward purchasing new pianos for the school. That sort of generosity is worthy of recognition, said Rick Florence, manager of keyboard technology and event services for the School of Music.

“Jason has always been supportive in the best way he can,” Florence said. “Not only does he help us through the loan program, and the accompanying fundraising sale, he’s also been heavily involved in establishing music competitions, funded prize money, and provides pianos for many of our off-campus events at no charge.

“He just wants to help. Jason may have graduated in 1993, but he never really left the School of Music.”

This year’s sale will feature more than 300 pianos ranging from $1,000 to $100,000. Brand names include Kawai, Schimmel, Mason & Hamlin and Pearl River, plus a few used Steinways.

“The beauty of this sale is that everybody wins,” Sipe said. “The buyers win because they get a great price. ASU wins because the music program gets a boost, and I win because I get to help my school.”

There is no cost to attend the piano sale, which is being held at the AZ Piano showroom at 4134 E. Wood St., Suite 200, Phoenix.

All new and loaned pianos come with a 10-year manufacturer’s warranty. Local delivery is included, as well as a bench and first tuning in the home.