An international group of mathematicians at Arizona State University and other institutions have released a new kind of online resource to help discover uncharted mathematical worlds.

The “L-functions and Modular Forms Database,” or LMFDB, is an intricate catalog of mathematical objects and the connections between them. Both beautiful and functional like an atlas, the LMFDB reveals deep relationships and provides a guide to previously uncharted territory that underlies current research in several branches of physics, computer science and mathematics. This coordinated effort is part of a massive collaboration of researchers around the globe, and includes developing new algorithms and performing large calculations on an extensive network of computers.

A Maass form, one of the 20 different types of objects in the LMFDB. Image by Fredrik Streoemberg Download Full Image

"We are mapping the mathematics of the 21st century," said project member Brian Conrey, director of the American Institute of Mathematics. "The LMFDB is both an educational resource and a research tool, one that will become indispensable for future exploration."

The scale of the computational effort that went into creating the LMFDB is staggering: a total of nearly a thousand years of computer time spent on calculations by multiple teams of researchers. One recent computation used more than 72,000 cores of Google's Compute Engine to complete a tabulation in one weekend that would have taken more than a century on a single computer. The objects in the LMFDB are all connected to the area of mathematics known as number theory. Related computations are often amenable to massive parallelization, and this allows for scaling to the cloud. Some of the calculations are so intricate that only a handful of experts know how to do them, and some are so big that it makes sense to run them only once, and then share the (verified) results.

"Many of us have made extensive computations, and we wanted to make this data available to other researchers and to link these projects together to aid mathematical progress. By joining forces, we now have a site for one-stop shopping of big data," said LMFDB project member John Jones, a professor of mathematics in the School of Mathematical and Statistical Sciences at Arizona State University. ASU professor John Jones is a pioneer in providing mathematical data via the web. Starting in the 1990s, he wrote a series of papers with David Roberts of the University of Minnesota at Morris on techniques for novel number theoretic computations, and would provide results on his website. Since 2011, he has been a regular contributor to the LMFDB. Photo by Rhonda Olson/ASU

Large­-scale cloud computing is just one of the ways in which the project is changing the way mathematics research is done. The LMFDB provides a sophisticated web interface that allows both experts and amateurs to easily navigate its contents. Each object has a “home page” and links to related objects, or “friends.”

Just like explorers, mathematicians become excited when they discover a connection between two areas that at first appear to be unrelated. The discovery leads to further breakthroughs in research when those connections are made explicit. Researchers following different paths may be heading toward the same destination, but unless they communicate with each other, the explorers on those paths may not realize how close they are.

The LMFDB includes researchers from more than a dozen areas, all of whom are building connections between their seemingly separate specialties.

“Each mathematician is an expert in their own area and knows one path really well, but the LMFDB helps to demystify the other paths by providing the possible interconnections in clear and navigable terms. It opens up a whole new world of possibilities for mathematical research,” said Jones.

The LMFDB also includes an integrated knowledge database that further clarifies relationships to mathematicians by explaining the contents of the site and the mathematics behind it.

All mathematics is eventually useful. One of the great triumphs in mathematics of the late 20th century was achieved by British number theorist Andrew Wiles with his proof of Fermat’s Last Theorem, a famous proposition by Pierre de Fermat that went unproven for more than 350 years despite the efforts of generations of mathematicians. The proof has been the subject of several documentaries, and it earned Wiles the Abel Prize earlier this year.

There will be several simultaneous events happening May 10 in North America and Europe to celebrate the launch of the LMFDB, including public presentations and lectures at the American Institute for Mathematics in San Jose, California; Dartmouth College in Hanover, New Hampshire; and the University of Bristol in the United Kingdom.

Launching on a nuclear path

Editor’s note:  This is part of a series of profiles for spring 2016 commencement. See the rest here. It’s rare for an entry-level job in a large organization to require a personal interview with the top boss. But when Arizona State University student and Navy ROTC Midshipman James Feddern applied for a position as a Naval Reactors engineer, that’s exactly what he had to do.  Feddern purs... 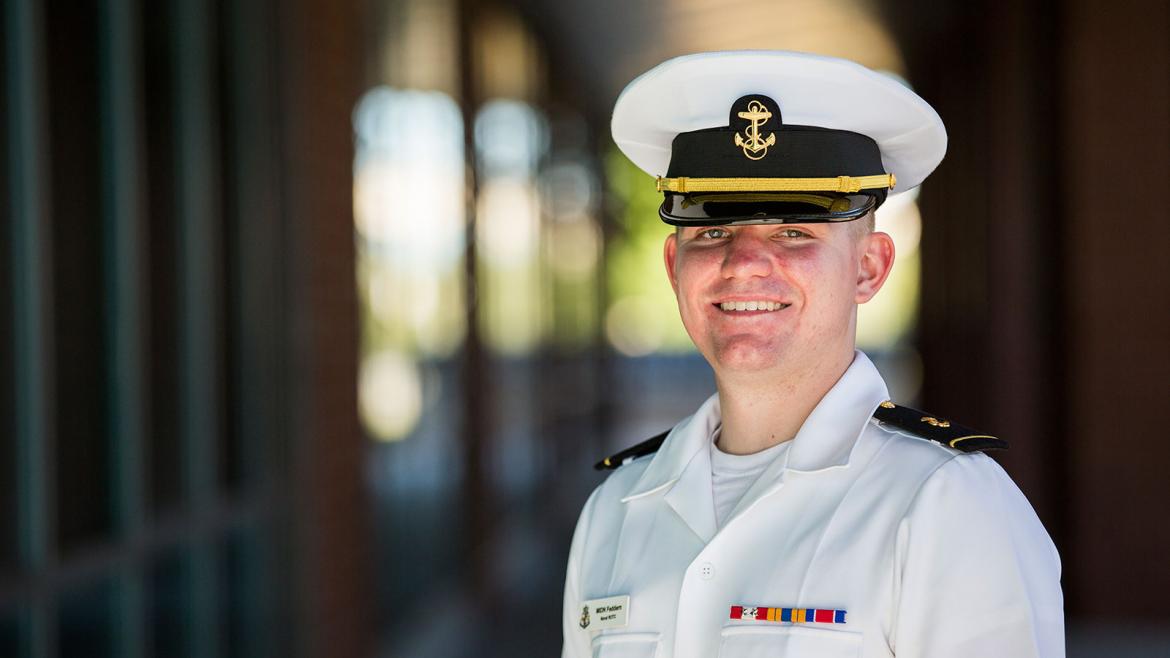 Launching on a nuclear path

Editor’s note:  This is part of a series of profiles for spring 2016 commencement. See the rest here.

It’s rare for an entry-level job in a large organization to require a personal interview with the top boss. But when Arizona State University student and Navy ROTC Midshipman James Feddern applied for a position as a Naval Reactors engineer, that’s exactly what he had to do.

The few applicants meeting the high initial entry requirements are invited to the Navy Yard in Washington, D.C., for interviews. The first two are grueling questioning sessions with the engineering team. Feddern also underwent a third two-hour specialized interview on such esoteric topics as astrophysics.

Those who make it past all the technical interviews then sit down for a one-on-one with the top boss. In this case, Feddern faced Admiral James F. Caldwell Jr., director of the Naval Nuclear Propulsion Program, for final screening. The four-star military officer weighed in.

Following his May 9 graduation and his commissioning into the Navy two days later, Feddern will head to his new job as a Naval Reactors engineer at the Navy Yard. Naval Reactors is an agency that researches, designs, regulates and operates nearly 100 nuclear reactors and power plants that drive many U.S. warships, including submarines and aircraft carriers.

“Initially, I will be going through more intensive training and education related to nuclear engineering,” said Phoenix native Feddern. “After that I could be assigned to do a variety of engineering jobs. I am very excited about this assignment. It was my first choice, and I am honored to have been selected to work at Naval Reactors.”

Feddern, a Barrett, the Honors College student who will be receiving his Bachelor's of Science in physics, shares some insights that led him to his current path and some other helpful views for readers.

Answer: I have a passion for science in general and really enjoyed studying physics in high school. When I started at ASU, though, I was enrolled in the flight program at the Polytechnic Campus. It was only after my first year, though, that I discovered I really had a passion for physics and a desire to learn more about it. Even though I liked learning to fly, I realized that it was something I would like to do as more of a hobby, rather than as a career. So I switched my major. I also thought I could serve the Navy with a degree in physics if I became an officer within the nuclear power community — which includes the opportunity to be an officer at Naval Reactors, a submarine officer, or a surface warfare officer on an aircraft carrier.

A: I really wanted to stay in Arizona. It’s definitely my favorite place to live, and it’s close to home. ASU in particular had so many different opportunities and a good flight program. This along with the financial benefits made ASU the best choice. ASU is also my father’s alma mater.

A: The best advice I think I could give is to actively find things you enjoy learning about outside of your field of interest and take classes in that subject, even if they do not relate to your major. For example, I took quite a few classes related to the philosophy of science. I found I really liked to explore and learn about the history and philosophy of science, so much so that I actually completed my senior honors thesis in this area. I definitely recommend that students in Barrett take advantage of senior thesis as an opportunity to expand their knowledge in different fields.

A: My favorite spot on campus has to be the upstairs patio at Barrett. This was the best place to study and meet people, especially when the weather was nice.

A: Initially, I plan to travel around Arizona a little bit before I leave, try to see some places I haven’t yet. Once I commission into the Navy I will go to work in Washington, D.C., at the Navy Yard.

A: I think one significant problem in our society is access to quality education. I would use that money to invest in scholarships for particular people around the world so they can obtain the best education possible. I think getting talented people great education is the key to solving other prevalent problems in society. Education is at the heart of society. Without developing and sustaining it, nothing can be accomplished.