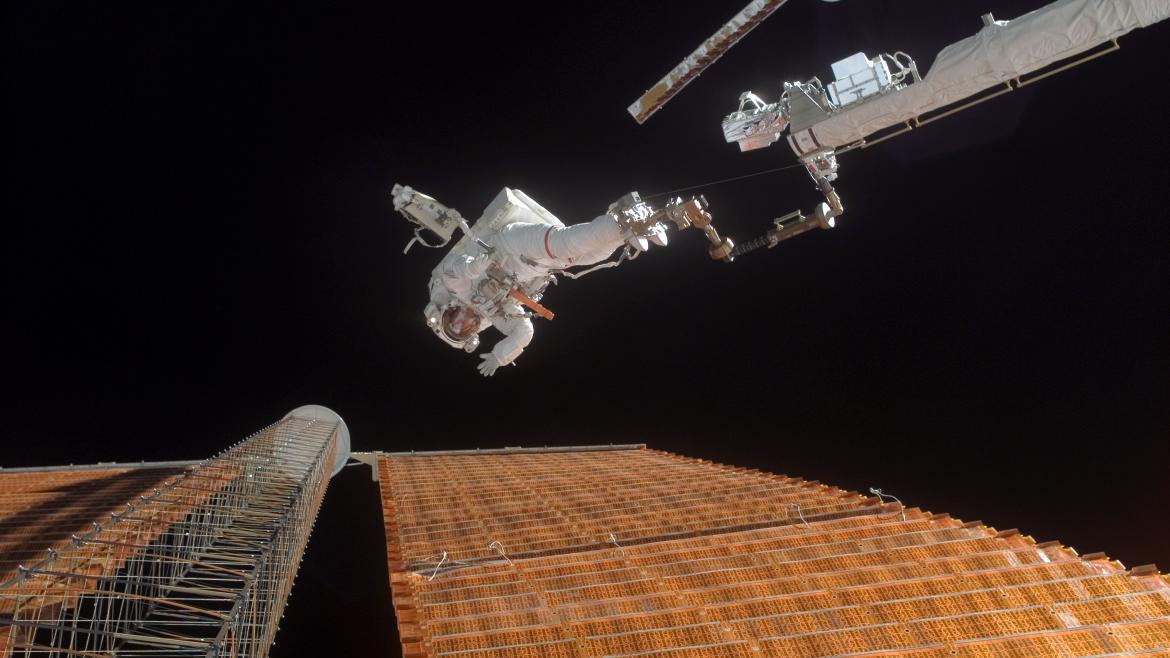 Scott Parazynski calls spacewalking the ultimate human exploration experience.
ASU prof Parazynski to be inducted into Astronaut Hall of Fame on May 14.
May 10, 2016

Scott Parazynski logged more than 8 weeks in space, performed 7 spacewalks — including 1 hailed as most dangerous ever

When rookie astronauts go on their first spacewalk, it’s common to hear them oohing and aahing when they go out the hatch.

Being awestruck may diminish with experience, but the sense of wonder never does, said astronaut Scott Parazynski.

Parazynski will be inducted into the Astronaut Hall of Fame on May 14. A veteran of five space shuttle flights, he has logged more than eight weeks in space, including 47 hours during seven spacewalks. One of his spacewalks is celebrated for being the most dangerous and difficult ever carried out.

“It was quite a sporty day out there,” he recalled of that task.

“You’ve actually moved off the planet,” he said. “You’re sort of disconnected from it to a degree. You look out the window and see this beautiful planet floating below. It’s a surreal, out-of-body experience to know that all of humanity and everyone you’ve ever met in your life is below you on planet Earth. It’s a strange mental perspective to have. You’re drawn out to the cosmos, but you’re always drawn back to the beautiful blue planet below you.”

With nothing but the black void of the universe below their feet, some people, especially on their first spacewalk, have a sense of falling, Parazynski said. Even astronauts, despite being highly trained and highly focused on mission tasks, can’t resist succumbing to the wow factor every so often.

“Every once in a while you look up and there’s the Great Barrier Reef above you,” Parazynski said. “Then you get back to work.” 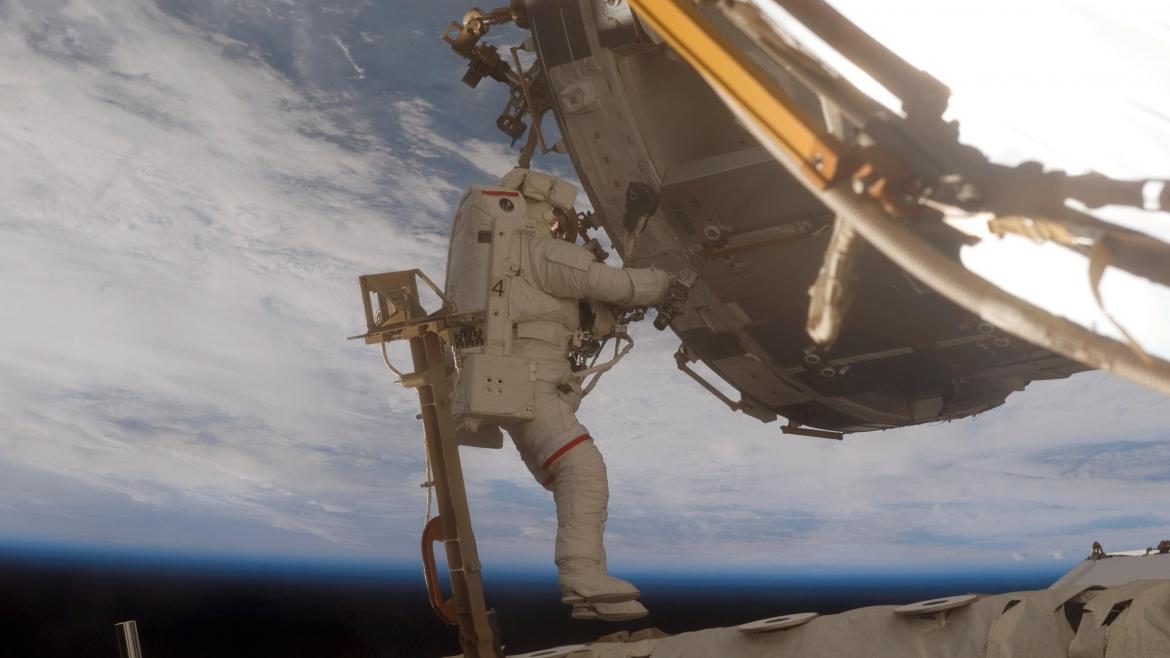 Scott Parazynski on a spacewalk during
the 2007 STS-120 mission to the International
Space Station. Top: Parazynski repairing a
damaged solar array on that mission,
considered the most dangerous spacewalk ever.

There are some downsides. Lack of gravity makes life more difficult. “You can’t just put things down and expect them to be there,” Parazynski said, adding that everything is Velcroed down in place. If not, “you’ll find it in the cabin air cleaner in a couple of days because of the air flow.”

There will be a fitting twist to Parazynski’s induction. The night before the ceremony, about 400 guests will dine at the Kennedy Space Center Visitor Complex in Florida beneath an enormous Saturn V, the biggest and most powerful rocket ever built.

Parazynski’s father was a Rocketdyne engineer who worked on designing and testing the F-1 engines for the Saturn V.

“My father worked on the Apollo program when I was very young,” Parazynski said, imbuing him with the passion to become an astronaut.

“It came as a surprise out of left field, but I’m really thrilled to be included amongst all the folks I’ve looked up to for so many years,” Parazynski said. He flew with Glenn as the senator’s crewmate and personal physician in 1998 on a Discovery mission when Glenn became the oldest person to fly in space.

The event supports the Astronaut Scholarship Foundation, which awards $10,000 scholarships to students at universities around the country to help defray educational costs in the pursuit of science, technology, engineering and math fields. The foundation was created more than 30 years ago by the surviving six members of the Mercury Seven, America’s first astronaut corps.

“You look out the window and see this beautiful planet floating below. It’s a surreal, out-of-body experience to know that all of humanity and everyone you’ve ever met in your life is below you on planet Earth. It’s a strange mental perspective to have. You’re drawn out to the cosmos, but you’re always drawn back to the beautiful blue planet below you.”

Parazynski said he misses the teamwork the most, “working with America’s best and brightest on things that are of great consequence. The sense of purpose was amazing. It was a dream come true.”

In October 2007, Parazynski led the spacewalk team on a highly complex space station assembly flight, during which he performed four spacewalks.

His fourth and final spacewalk is widely regarded as one of the most challenging and dangerous ever performed. He was positioned by a 90-foot robotic boom farther than any orbiting astronaut had ever ventured from the safety of the airlock. It was an unplanned emergency repair to a fully energized but torn solar array wing. He spent 45 minutes getting to the tip of the space station.

The array couldn’t be powered down. Everything on Parazynski’s suit had to be specially insulated so electricity couldn’t arc into it. Space suits contain 100 percent oxygen. He could have been electrocuted if he touched a solar cell. The other risk was how far out he went. Mission planners usually want spacewalkers to be able to execute an emergency return to the airlock within 30 minutes of a failure. If his suit failed, he wouldn’t be able to make it back in time.

Mission Control and the crew agreed a higher degree of risk had to be accepted. In the related photo on this page, Parazynski’s feet appear clamped into the boom. They weren’t. He had to concentrate to keep them wedged in.

He attached five devices called “cuff links” on the array, which kept the torn section folded and prevented further tearing. The feat has been called the “Apollo 13 moment” of the space shuttle and space station eras because of the tremendous coordinated effort in orbit and on the ground by Mission Control and other engineering experts.

“That was quite unusual,” Parazynski said.

“It’s the ultimate human exploration experience, to float above your planet, and see it from that perspective and to go on a spacewalk,” he said. “I really miss that and I wish I hadn’t had to hang up my space suit. It was time for me to get out of the way of the new recruits and to move on to other things.”

President Obama announced his intent to appoint four individuals to key Administration posts and Beatriz Rendón, vice president of Educational Outreach and CEO of ASU Preparatory Academy, was among the list of well-respected professionals.Rendón was sworn in as a member of the President’s Advisory Commission on Educational Excellence for Hispanics in April.The White House Initiative on Educati...

President Obama announced his intent to appoint four individuals to key Administration posts and Beatriz Rendón, vice president of Educational Outreach and CEO of ASU Preparatory Academy, was among the list of well-respected professionals.

Rendón was sworn in as a member of the President’s Advisory Commission on Educational Excellence for Hispanics in April.

The White House Initiative on Educational Excellence for Hispanics was originally established in 1990 to address the educational disparities faced by the Hispanic communities across the country.

The initative, in partnership with the President’s Advisory Commission on Educational Excellence for Hispanics, will advance a strategic policy to tackle critical educational challenges such as, increasing the number of Hispanic high school graduates and ensuring more Hispanic students enroll and complete a post-secondary education.

“There is no greater equalizer than a college degree,” Rendón said. “I am honored to be a member of the Commission and welcome the opportunity to share the great work ASU is doing toward this end and contribute to policy discussions that assist with advancing this goal.”

Hispanics have the lowest education attainment levels of any group in the country despite being both the largest and fastest-growing minority group in the United States. The primary goal of the Commission is to provide a platform in which to think through ways to improve academic achievement of Latino students.

Rendón has first-hand experience and with helping students achieve academic success. As CEO of ASU Prep, she leads a team that continues to raise the bar in terms of high school graduation rates and increasing the number of students who pursue a college education across student populations from diverse socio-economic backgrounds.

ASU Prep is an innovative K-12 charter school, offering students an optimum environment for learning, helping them achieve their potential and ensure the appropriate level of college readiness. ASU Prep serves over 2,000 students across its sites and nearly half identify as Hispanic. In 2015, the first graduating class at ASU Prep realized a 98 percent four-year graduation rate and 100 percent of the students were admitted to a post-secondary study. ASU Prep’s class of 2016 is on track to graduate 100 percent of its seniors.

Through her leadership and commitment to closing the attainment gap, Rendón, in her current roles at ASU, is part of a team that will expand the reach and impact of outreach efforts and launch ASU Prep’s new online school in fall 2017.

Rendón noted that ASU Prep’s talented teaching faculty, staff, students and families have made tremendous progress, but there remains much to be done.

“We look forward to the future ahead, which will continue to build on the great work to date,” she said.

Much like the goals of the university, Rendón’s forward-thinking endeavors and commitment to increase Arizona’s college enrollment make her an invaluable asset to the President’s Advisory Commission on Educational Excellence for Hispanics.

“I am grateful to be part of a team of talented professionals committed to student success and college attainment, and am privileged to work for a leading university like ASU, to advance access and excellence for all,” she said.

More about the president’s announcement can be found here.