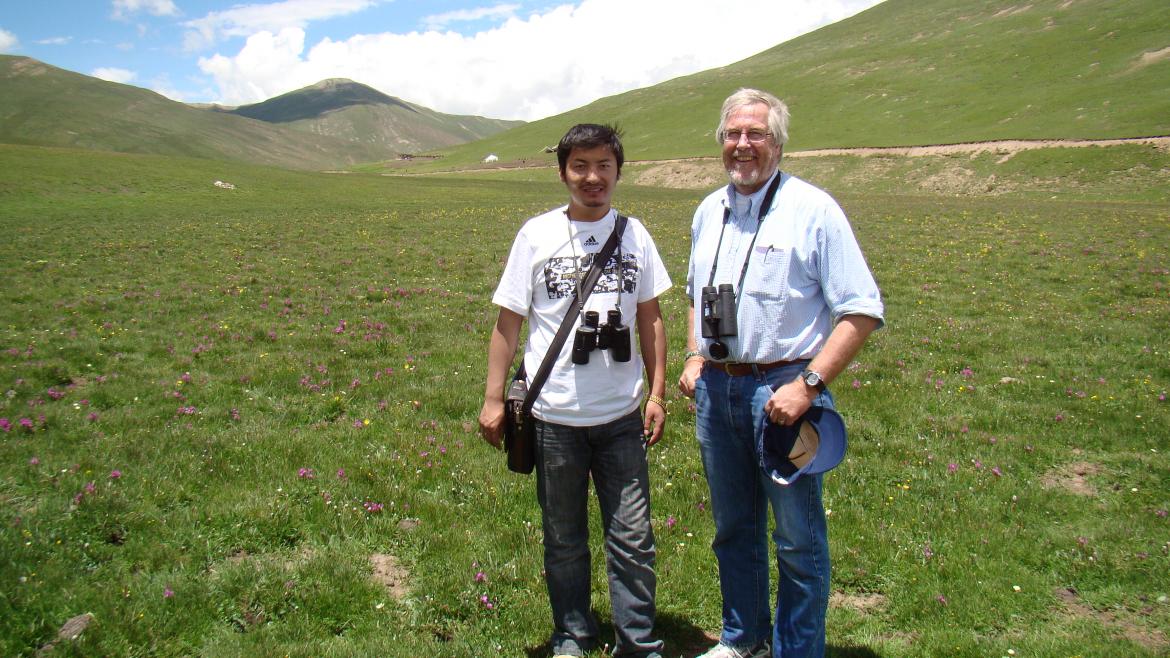 Finding a kindred spirit half a world away

Palden Choying grew up as a shepherd in Tibet but found his way to higher education, where studying the pika led him to Andrew Smith's research, and to ASU

Palden Choying spent his childhood as a nomadic shepherd in the mountains of the Yushu Tibetan Autonomous Prefecture. He spent his days helping his mother milk yaks and tended to his family’s sheep. At night, he would fall asleep listening to folk tales passed down throughout his community.

Choying’s life changed when his father got a job as a police officer in the county town of Xornda. At 8 years old, he got his first taste of formal education, though the transition was difficult.

“Teachers in primary school never provided inspiration and taught us nothing fascinating,” Palden said. “The teachers forced us to study, and that affected me negatively.”

Despite not being particularly fond of studying, Choying scored third highest out of 200 students from five different township primary schools and two county-level primary schools on the Nangchen Nationalities Middle School entrance exam.

From then on, Choying was motivated to be the top student and spent most of his time studying or playing soccer. By the end of his first semester, he was one of the top four students in three classes — once again helping him to advance to an undergraduate level education.

The next turning point in Choying’s life was when an American professor asked him to join a highly competitive English training program. That, along with his status as one of the top students at his university, helped him get a scholarship to study environmental management in the Philippines.

“At the beginning, my professors wanted me to study environmental pollution in the Philippines,” Palden said. “But I had convinced him to let me study about grasslands. I didn’t have a specific focus at first, but that search led to the Pika.”

Researching the pika, a small mammal viewed by many as a pest, was where Choying eventually landed. It also proved to be his connection to Arizona State University.

While studying, he came across a research paper written by School of Life Sciences President’s Professor Andrew Smith, which labeled the pika as a crucial species in the area. After reading more of Smith’s work, Choying wrote to him and started a relationship that resulted in him enrolling at ASU through a million-dollar, international grant of Smith’s.

On May 9, he will receive his doctorate in biology and society through the School of Life Sciences, part of the College of Liberal Arts and Sciences.

Question: What was your “aha” moment, when you realized you wanted to study in the field you’ve chosen?

Answer: Choosing to study in this field didn't come out of a sudden realization of its importance, but rather from a gradual awareness of the environmental challenges facing my home region and Qinghai-Tibetan Plateau. Tibetans have traditionally lived harmoniously with the natural world, and a range of values, including religious beliefs, are interconnected with the natural entities. But external factors such as economic development and social transformations have imposed great challenges in maintaining the health of the environment that Tibetans desire. Keeping a harmonious relationship between nature and humans is the Tibetan peoples’ important cultural heritage, and it is how we define ourselves.

Thus, as a native Tibetan, I felt I had the obligation to strive for maintaining this intimate relationship between nature and humans under the new setting. I thought receiving an education could empower me to achieve this goal, so I chose to major in environmental management from a couple of options that I could select for my master’s program in the Philippines. I am very fortunate to have the opportunity to continue higher education in the biology and society program at ASU.

A: I am very impressed by the quality of education in general, but specifically I am greatly inspired by the hard-working professors and many students. I am also very much inspired by how courses are designed to solve real issues with hands-on activities. That is rare in universities where I come from, and I think it is part of the reasons why most of the best universities in the world are in this country.

A: My major professor, Andrew Smith, offered me an opportunity to study under his supervision at ASU and work for a research project, “Determinants of grassland dynamics on the Tibetan highlands,” for which he is one of the primary investigators. That was a dream come true, so I didn’t hesitate a second and accepted the offer when he contacted me about this opportunity via email.

A: I will be teaching conservation biology and biology at Qinghai Normal University in Qinghai Province in China, where I received my bachelor’s degree, and continue my research on seeking sustainable solutions for Qinghai-Tibetan Plateau alpine grassland ecosystems.

Communication and events coordinator , Center for Evolution and Medicine

Finding a community within School of Life Sciences

Editor's note: This is part of a series of profiles for spring 2016 commencement. See the rest here.Michael Ashley had no idea what he wanted to study when he was a senior in high school. He knew he liked chemistry and biology. So, when it came time to pick a major, he figured the School of Life Sciences was worth a try. According to Michael, it didn’t take long to decide how he felt about the...

Finding a community within School of Life Sciences

Michael Ashley plugs in, finds passion for biology, health and helping others

Michael Ashley had no idea what he wanted to study when he was a senior in high school. He knew he liked chemistry and biology. So, when it came time to pick a major, he figured the School of Life Sciences was worth a try. According to Michael, it didn’t take long to decide how he felt about the choice. 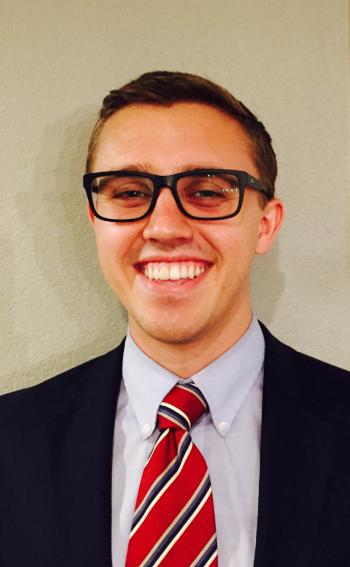 “I definitely warmed up to it fast,” said Ashley, who majored in biological sciences (genetics, cell and developmental biology concentration) with a minor in biochemistry. “I’ve always had a passion for science in general, but it was the way the School of Life Sciences (SOLS) felt like a close community within ASU that I fell in love with.”

Once he was hooked on the community, Ashley found many ways to be involved. After a good experience in the SOLS undergraduate mentorship program, he joined as a mentor himself and eventually became one of its most senior members. He also became a Supplemental Instruction leader through the University Academic Success Programs, which led to an opportunity that came to define his undergraduate career.

Ashley joined assistant professor Sara Brownell, associate professor Miles Orchinik and a number of graduate students in their efforts to keep growing the School of Life Sciences BioBridge program. The two-week program provides incoming students the tools and resources they need to succeed in college before their first semester even starts. Ashley took an active part in the execution of the program, helping students acclimate to an active-learning classroom environment.

While Ashley was assisting with BioBridge, he was also busy working as a medical scribe at St. Joseph’s Hospital and Medical Center in downtown Phoenix. There, he watched an emergency-room doctor save a patient’s life — which cemented his decision to pursue the profession himself.

He answered a few questions about his time at ASU before receiving his degree this week.

Answer: My “aha” moment was in high school when I started studying biology and other STEM subjects. I realized, “Hey, this is pretty cool and I seem to be good at it.” Since then I have only become more interested the deeper I go into my studies.

A: One of the biggest perspective changes I had was when I started working as a scribe at a hospital. As biological sciences major, I have studied and understand the molecular underpinnings of many diseases and conditions. In the classroom, we are fairly far removed from the diseases we study. Seeing and working with patients firsthand made me understand the importance of both research and in medical treatment.

A: I chose ASU because they have a fantastic biology program, which has more than adequately prepared me for my future endeavors, provided me with scholarships to help for the expenses associated with college and offers students an extensive support network designed to help students succeed.

A: My one piece of advice would be to take advantage of the many opportunities at ASU. Being a large school, ASU has many opportunities to get involved with research or just to find an on-campus club with people who have similar interests and passions as you do. Either way, ASU is so diverse and offers so many opportunities that there really is something for everyone.

A: My favorite spot on campus would have to be Old Main and its lawn. I’ve gone there more than a few times to just relax between classes or to study during the day.

A: After graduation, I will be applying to medical school while continuing to work as a medical scribe during my gap year.

A: I would like to put the money both into Alzheimer’s research and into care for Alzheimer’s patients. Alzheimer’s seems to be a pretty underserved population in medicine despite the disease becoming more prevalent and the huge emotional and financial tolls it takes on the families of patients.