Study: Regular teenage pot use may significantly increase the risk of paranoia, hallucinations

A study just published by the American Journal of Psychiatry finds that teenage boys who smoked pot at least once a week were at increased risk of experiencing subclinical paranoia and hallucinations, even after they stopped using marijuana.

“In this analysis we found that for each year teenagers engage in regular marijuana use, their likelihood of experiencing subclinical psychotic symptoms like paranoia increased, and these symptoms tended to persist even when they remained abstinent from marijuana use for a year,” said Dustin Pardini, an associate professor in the ASU School of Criminology and Criminal Justice. “This is important because other studies have found that teens who exhibit chronic subclinical psychotic symptoms are more likely to develop psychotic disorders like Schizophrenia.” 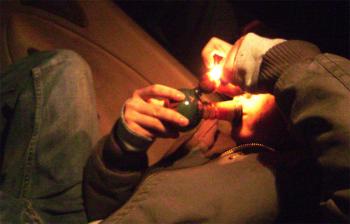 Pardini, together with lead author Jordan Bechtold and other researchers at the University of Pittsburgh Medical Center, used data from a sample of 1,009 Pittsburgh teenage boys who self-reported their frequency of marijuana use and subclinical psychotic symptoms annually from age 13 to 18. They found that for each year teenagers used marijuana at least once a week, their odds of experiencing paranoia or hallucinations increased by more than 100 percent. Even when teenagers stopped using marijuana for a year, their heightened risk of experiencing these symptoms remained. This association was not found for tobacco, alcohol or other illicit drug use.

“Still, only a subset of adolescents that used marijuana regularly experienced subclinical psychotic symptoms, and an even smaller percentage developed psychotic disorders,” cautioned Bechtold. “We still need to understand the underlying mechanisms that account for this linkage, including why only some individuals seem to be vulnerable to the negative effects of chronic marijuana use.”

The researchers caution that observational studies, such as this one, can never definitively prove causation and note other limitations, including the use of an exclusively male sample. Additionally, boys in the study were teenagers in the early to mid-1990s. Since that time, the potency of delta-9-tetrahydrocannabinol (THC), the compound primarily responsible for most of marijuana’s psychological effects, has increased significantly.

“We know that the percentage of THC in marijuana has increased since the data were collected, and various products infused with concentrated THC are becoming increasingly available,” observed Pardini. “If there is a causal association between THC and psychotic symptoms, it might be more pronounced now than it was then.”

Blackboard upgrade scheduled for May 10-12

An upgrade to ASU Blackboard will be conducted from May 10-12, starting at 6 p.m. (MST) May 10 and ending at 6 a.m. (MST) May 12. New features include: anonymous and delegated grading; calculated formula questions are new in assessments; SafeAssign is integrated with Blackboard assignments; student preview allows instructors to experience a course as a student (separate student test accounts are n...

Blackboard upgrade scheduled for May 10-12

New features include: anonymous and delegated grading; calculated formula questions are new in assessments; SafeAssign is integrated with Blackboard assignments; student preview allows instructors to experience a course as a student (separate student test accounts are no longer necessary).