Coral reefs and hard-shelled sea creatures such as oysters and mussels are constantly being threatened, not only by the detrimental effects of stressors such as climate change and habitat loss, but also by microorganisms.

Researchers from Arizona State University have discovered how a particular type of cyanobacteria, a photosynthetic microbe, is able to bore into and live within solid carbonates, the main mineral that makes up coral skeletons and seashells — hastening their erosion and causing trouble for shellfish farmers. 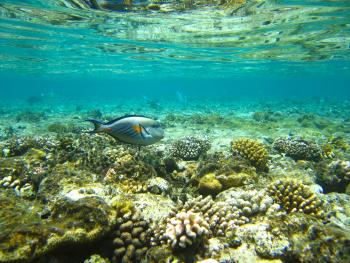 Organisms that can do this, known as euendoliths, infest many kinds of rock, but they are especially adept at boring into rock types that consist of calcium carbonate, such as limestone and marble used to make sculptures, buildings and other man-made structures.

Brandon Guida, a School of Life Sciences doctoral candidate and lead author of the study, said: “The mechanisms by which these organisms can excavate carbonates and live inside rocks were, until now, a real mystery that seemed to go against the laws of chemistry. But now we have a better idea how they do it.” Their findings confirm several previous hypotheses.

Guida and his mentor, Ferran Garcia-Pichel, dean of Natural Sciences with the ASU College of Liberal Arts and Sciences, published their findings in this week’s early online edition of the scientific journal Proceedings of the National Academy of Sciences.

The scientists found that these rock-busting microbes orchestrate the activities of many cells in a coordinated way to transport mineral calcium to the surface, much like a conveyor. This type of cell-to-cell calcium transport has never been observed in bacteria before.

Too much calcium inside any cell can be toxic, and all known life forms keep it at very low levels inside. However, this particular cyanobacterium can move a lot of calcium through its cells. To prevent calcium from becoming toxic in most cells, they develop a few special cells — a type of “calcium depot” — also never seen before, to help store and regulate the release of the calcium in an organized fashion. 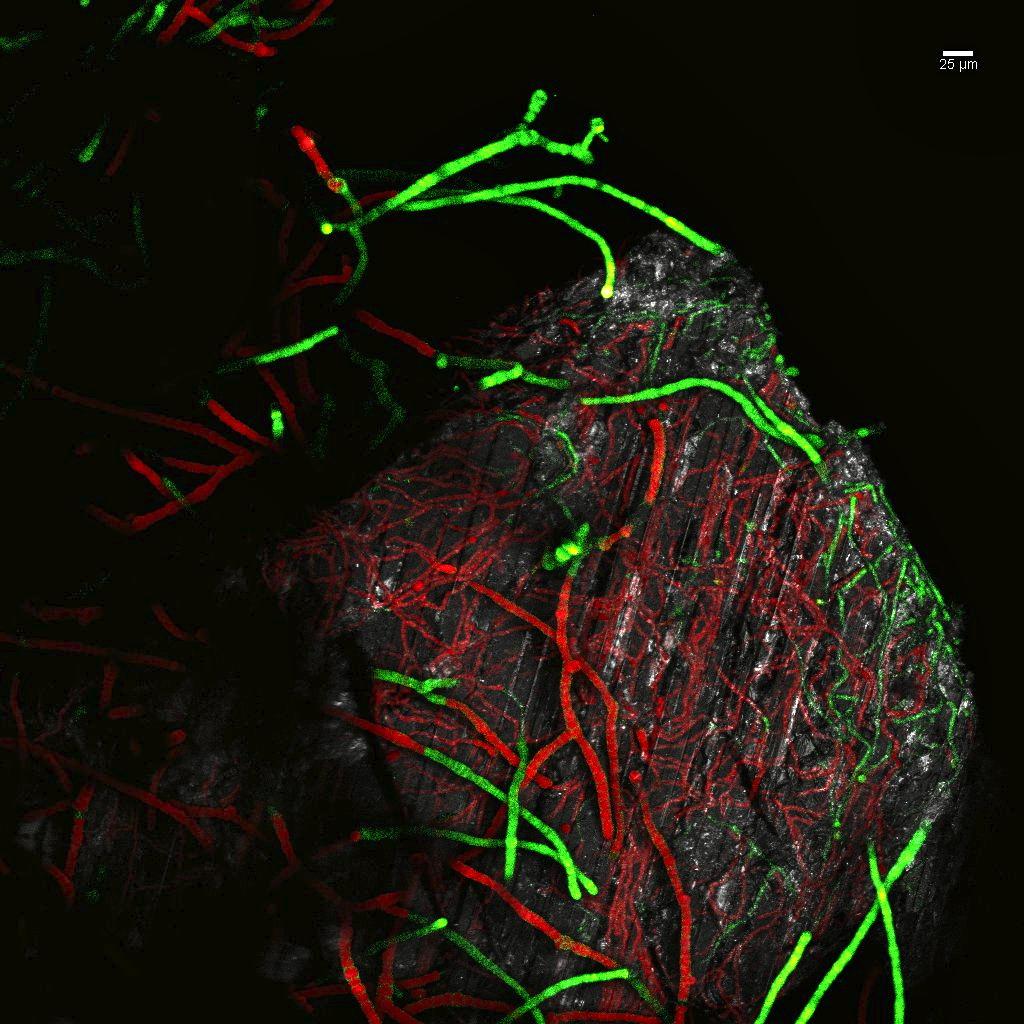 A laser confocal microscope image showing cells full of calcium (green) and cells with normal intracellular calcium, which can undergo photosynthesis (red) while infesting a piece of calcium carbonate (gray). Both boring and non-boring bacterial filaments are visible: those extending out of the chip are much larger in diameter. Calcium accumulation is seen mostly toward the ends of filaments. Image credit: Brandon Guida

"The level of cellular specialization and organization observed in this single bacterium is remarkable. Our research here supports the idea that bacteria are not just simple unicellular organisms but can be sophisticated, organized and truly multicellular," Guida added.

“The implications of these findings for cell biology and the environment go beyond this particular study,” said Garcia-Pichel, co-author of the study and professor with the School of Life Sciences. “These microorganisms teach us how one can use light energy to transport materials at a small scale, and how to efficiently engineer processes that may be of use in geotechnics, or put to work as targeted decalcifying agents. After more than 3 billion years of evolutionary tweaking, microbes often provide us with such learning moments.”

While this research answers many questions, more remain, such as why these microbes bore in the first place and how can they survive the intracellular calcium concentration the scientists do observe. The researchers say the next steps will be to look at the genes used by this cyanobacterium and to study whether these bacteria are actually consuming the carbon in the rock as well.

"We now hypothesize that the observed calcium transport is only part of the picture and that these microbes may actually be using the carbon released during boring process in photosynthesis, essentially eating the rock, which would be pretty awesome," Guida said.

More than one kind of smart

Every person in the world is gifted with a complex interaction of several kinds of intelligence, and universities must recognize that each student is unique, according to Howard Gardner, who developed the groundbreaking theory of multiple intelligences.Gardner discussed his pioneering research on Tuesday at Arizona State University, which is working to broaden access to people with different types... 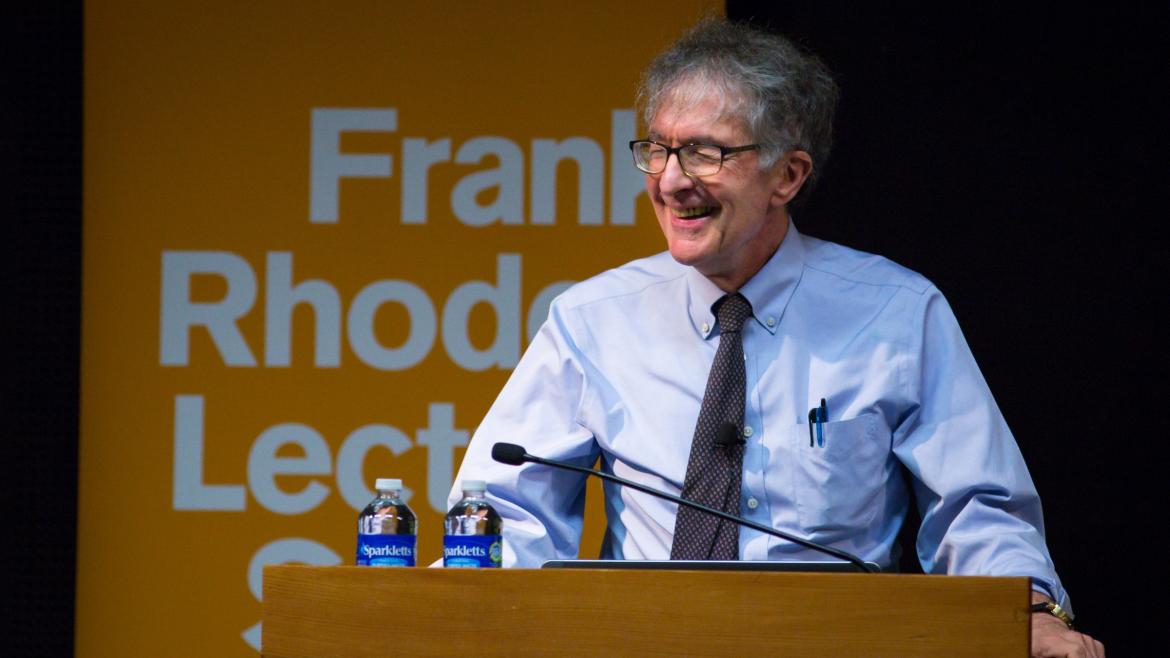 More than one kind of smart

Tempe campus
Harvard prof: Learning should be individualized; teaching, pluralized.
Gardner: All people have all 8 kinds of intelligence, just in varying amounts.
May 3, 2016

Every person in the world is gifted with a complex interaction of several kinds of intelligence, and universities must recognize that each student is unique, according to Howard Gardner, who developed the groundbreaking theory of multiple intelligences.

Gardner discussed his pioneering research on Tuesday at Arizona State University, which is working to broaden access to people with different types of intelligence.

“I think what you’re doing here in supporting intellectual fusion is a shrewd and justifiable move,” Gardner said.

“Not only are so many problems much bigger than one discipline, but in the contemporary age, we need more people who can move easily from one mental territory to another.”

Gardner is the John H. and Elisabeth A. Hobbs Professor of Cognition and EducationHe also is senior director of Harvard Project Zero, which improves education in the arts. at the Harvard Graduate School of Education.

His talk, titled “Beyond Wit and Grit,” was part of ASU’s Frank Rhodes Lecture Series on the Creation of the Future.

Gardner said that traditionally, people were considered to have one type of general intelligence, which could be measured with an IQ test. In the early 1980s, he and researchers from other disciplines looked at evolution, biology, human development and other cultures, and he began to distill his theory of multiple intelligences.

“Instead of having a single computer in our skulls, we have a bunch of different ones,” Gardner said.

The eight intelligences are spatial, bodily-kinesthetic, musical, linguistic, logical-mathematical, interpersonal, intrapersonal (knowing yourself) and naturalistic (the ability to make distinctions in the world of nature).

“Life isn’t fair. Some people have a bunch of great computers,” said Gardner, who has won a MacArthur “Genius Grant.” 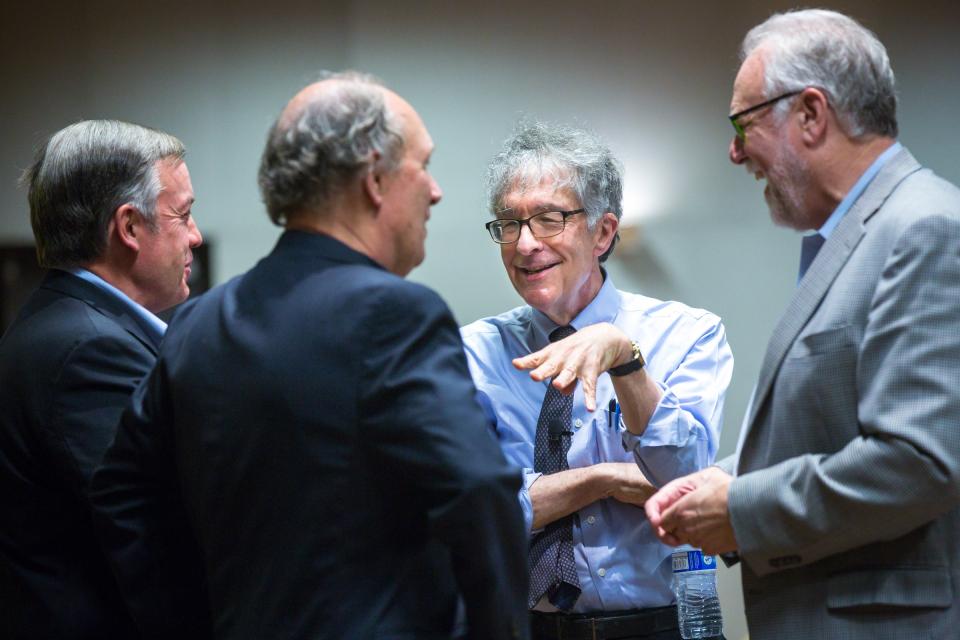 Professor Howard Gardner of the Harvard Graduate School of Education speaks with President Michael Crow (left), psychology professor Keith Crnic (center) and Provost Mark Searle (right) and others before speaking to an audience of more than 300 Ma 3 in Tempe. Photos by Charlie Leight/ASU Now

Gardner said that it’s crucial to understand that all people have all of these intelligences, to varying degrees, and that everyone, even identical twins, has a unique intelligence profile.

The theory has two important applications to education: Learning should be individualized, because everyone learns differently, and teaching should be pluralized, meaning that important concepts must be taught several different ways.

“Now in the digital era, individualization is much more possible,” he said, noting ASU’s dedication to online education.

ASU President Michael Crow introduced Gardner and said that his theory has been transformative.

“He’s one of those scholars who focuses on a topic that we intuitively understand,” Crow said. “We understand that people are not the same.

“But so much of our modern education enterprise doesn’t recognize that uniqueness. It wants to channel us.”

Crow said that ASU is working toward the notion that there is not one path or one model.

“What we have to do is create a teaching and learning and discovery institution that recognizes this individuality,” he said.

Gardner said that “grit” — persevering through adversity — has become a hot topic in education, but he realized that it takes more than intelligence or “grit” to be a good person. He showed a photograph of German storm troopers saluting Hitler.

“They had plenty of grit,” he said.

In 1993, he was disturbed to discover that someone in Australia had taken his theory and listed different races and ethnicities along with corresponding intelligences that each had or lacked.

“I realized that if I didn’t take responsibilities for how my ideas were used, I couldn’t expect anyone else to, either. The past 22 years, I’ve been working on ‘the goods’ — what does it means to use your wit and grit to the service of good ends,” he said.

Gardner is co-director of the Good Project, which researches ethics, citizenship and digital life.

“It doesn’t help to be the smartest guys in the room or the best and the brightest in an ironic sense,” he said.

“What matters is you use this ‘wit and grit’ to become a good person, a good worker and a good citizen.”