Janet Franklin has had quite a year: After having been elected to the National Academy of Sciences two years ago, in June 2015 she was selected as an Arizona State University Regents' Professor and also as a Fellow of the Ecological Society of America. In November 2015, she was elected to the American Association for the Advancement of Science.

On April 19, Franklin received notification of one more recognition — she joins just 11 other faculty at ASU who are members of the American Academy of Arts and Sciences. The American Academy, as the organization is known, was founded in 1780 and includes notable members from Benjamin Franklin, Thomas Jefferson and John Adams to Nelson Mandela, Georgia O’Keeffe, Margaret Meade and Albert Einstein. 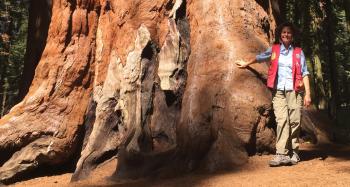 ASU professor Janet Franklin joins just 11 other faculty at ASU who are members of the American Academy of Arts and Sciences. Download Full Image

This mix of leaders are a fitting group of peers for Franklin, whose research bridges the academic disciplines of geography and biology, and who collaborates with scientists in a wide assortment of other disciplines.

Franklin’s work focuses on the dynamics of land-based plant communities. Plant communities are impacted by a complex web of factors — from natural forces like fire to human impacts like introduction of non-native species and clearing of land.  Looking at variations over decades and centuries, changes in precipitation, temperature and other aspects of climate clearly impact vegetation also.

Buffeted by all these forces, some ecosystems and species decline, and others survive. Franklin’s work focuses on understanding how the various factors interact with each other to create unique responses to change.

From her early years as a scientist, Franklin has investigated these questions by innovative use of geographic data such as earth images collected by satellites, together with analytic tools that tease out unique spatial patterns and how they vary over time and space.

Given the innovative techniques that she’s pioneered, Franklin has collaborated with a diverse group of scientists — and her collaborators are quick to mention her ability to work across disciplinary boundaries.

“Janet Franklin epitomizes the modern interdisciplinary scientist,” said David Steadman, curator of ornithology at the Florida Museum of Natural History. Steadman works with Franklin on investigating the long-term impacts of human and natural disturbance on tropical forest island ecosystems in the Caribbean.

“Franklin collaborates creatively and very effectively with an amazing array of ecologists, botanists, zoologists, paleontologists, and archaeologists, not to mention geographers of every sort. Through a combination of modern methods and a good deal of common sense, Janet enriches research projects around the world,” Steadman added.

Another of Franklin’s current efforts explores interrelations between climate, environment and human origins in southern Africa over many millennia. The project is led by Curtis Marean, professor in ASU’s School of Human Evolution and Social Change.

“The project includes a wide diversity of scientists from many ‘cultures’ of nation and science, and keeping things together can be a challenge,” said Marean. “Janet is a dream to work with — always supportive, helpful and flexible. She helps us work as a team, while at the same time bringing an incredible intellectual game.”

Julie Ripplinger, a postdoctoral student under Franklin, said, “I came to Arizona State University to work with Janet for my PhD when she inspired me to push the boundaries of conventional ecological studies and answer questions about why and how urban plant diversity is changing in the long-term.

“Janet has long been my mentor and champion. Janet continues to inspire me as a woman in science and to challenge me to excel as a scholar.”

Franklin will be inducted into the American Academy of Sciences on Oct. 8 at the Academy’s headquarters in Cambridge, Massachusetts.

Once a member of the academy, Franklin will have opportunities to participate in the organization’s work in policy research.  Members contribute to Academy publications and studies of science and technology policy, energy and global security, social policy and American institutions, the humanities and culture, and education.

“Janet Franklin’s accomplishments bring honor and recognition to ASU, our school and to the geographical profession. I personally am in awe of Janet’s achievements, said Patricia Gober, interim director of the School of Geographical Sciences and Urban Planning. “Speaking for the faculty, we are enormously proud to have her as a colleague.”

Janet Franklin, a professor in the ASU School of Geographical Sciences and Urban Planning, fuses disciplines of geography and biology by studying the climate and topographical changes.

Environment , Research , The College of Liberal Arts and Sciences

What ecosystem greeted the first human settlers in the northern Caribbean?

The College of Liberal Arts and Sciences , Environment

Janet Franklin isn’t the sort of person who likes to raise alarms, but when she talks about the environment, people should take notice.

She says humans are wreaking havoc on Mother Earth, and her perspective carries the weight of big data as she monitors the dynamics of Earth’s changing climate and surface. Janet Franklin, an ASU professor in the School of Geographical Sciences and Urban Planning and a Regents’ Professor for the 2014-2015 academic year, says climate change is occurring with unprecedented speed. Download Full Image

“In a decade we had gone from having to rely on the predictions of models about climate change to having amassed heaps and heaps of observational evidence of climate change attributable to human-generated greenhouse gasses from use of fossil fuels and other activities,” said Franklin, an ASU professor in the School of Geographical Sciences and Urban Planning and one of four Regents’ Professors for the 2014-2015 academic year.

“Rapidly melting mountain glaciers was the stunning one — this was even before the more recent dramatic losses of Arctic sea ice. I made a conscious decision to address climate-change impacts on ecosystems in my research and have done so ever since.”

The research started when she was 12. That’s when she attended a lecture by Linus Pauling at Stanford University with her father, who was a San Francisco-area physician. Pauling spoke about his Nobel Prize-winning research on sickle cell anemia.

“I was so excited about what he (Pauling) described, although I barely understood it,” Franklin said. “I decided I wanted to be a molecular biologist and solve life puzzle sciences.”

Franklin has been solving those puzzles ever since. Her research bridges the academic disciplines of geography and biology by using various kinds of satellite imagery, remote sensing and climate and topographic data.

“Everyone talks about big data these days, but they mean millions of tweets or stock-market transactions,” Franklin said. “I have always enjoyed the technical challenges of working with these big geospatial data sets to monitor the dynamics of the Earth’s surface.”

What she is finding isn’t exactly the kind of data that is encouraging or uplifting. However, it’s a message that needs to be taken seriously.

“Climate change is occurring with a speed that is virtually unprecedented in Earth’s history, but land-use change — deforestation, urbanization, conversion of prairies to crops and rangeland — over the past 10,000 years and especially 500 years has an even more immediate and profound effect on natural systems everywhere,” Franklin said. “Only by considering these global change factors together can we make evidence-based projections or recommendations of resource conservation and land management strategies.”

Franklin’s latest research project takes her to two sites in northern California — the Sierra National Forest and the Tehachapi Mountains — where she is studying refuge areas for plants and tall trees during the state’s most severe drought in recorded history.

As for Franklin’s career, it is anything but dry. She was elected to the National Academy of Sciences in 2014 for her pioneering work employing geospatial data and spatial analytical tools to examine the evolving biodiversity of ecosystems over time, as they relate to the physical environment, ecological processes and human influences. In June, she was named Regents Professor, an honor that has left her “flattered, honored, surprised and humbled.”

“This has been a big year,” Franklin said. “I’m the kind of scientist who has been quietly doing my work for three decades. I never expected this kind of recognition. It feels pretty nice.”