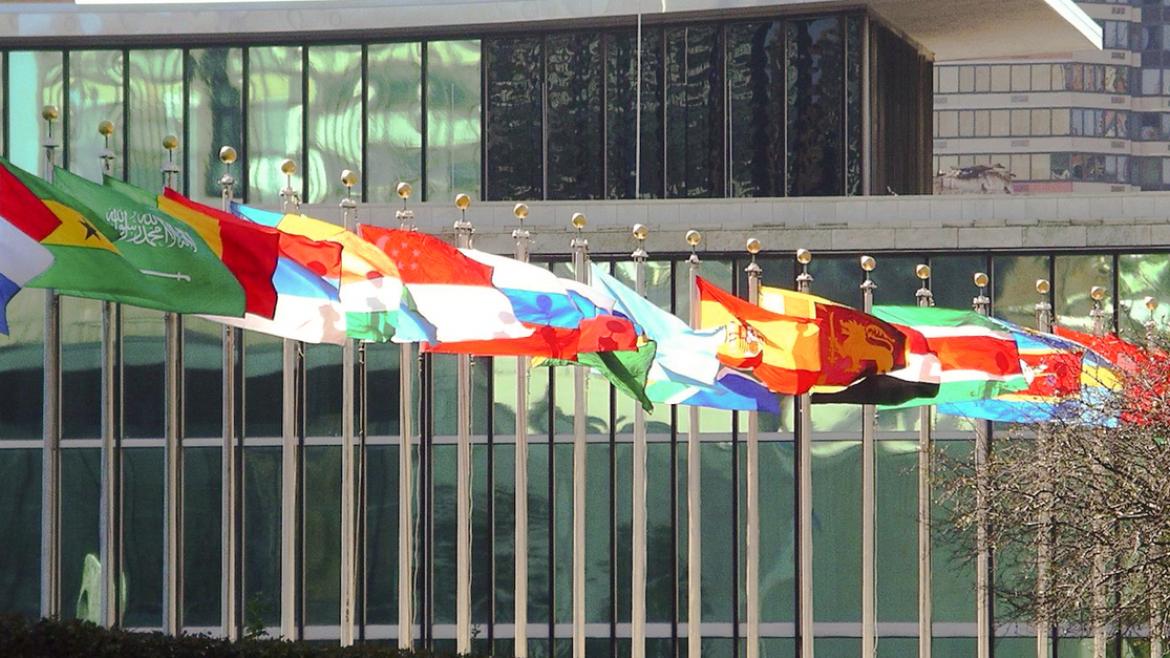 Real-world experience in a model embassy

President Barack Obama is scheduled to travel to Vietnam next month, and a class at Arizona State University’s Washington Center is researching what he should do while he’s there.

Global studies major Caitlin O’Grady has looked into what it would mean for the president to make remarks about decreasing corruption in the business sector of that developing economy.

Connor Murphy, a journalism and political science student at ASU, has suggestions for the president about selling weapons to Vietnam.

And Irene Kinyanguli, who is studying public policy, wrote the president some talking points about the Trans-Pacific Partnership.

None of these students is interning at the White House or the State Department. (And by the way, interns there don’t get such cool assignments.)

But they sure could.

The three, all juniors, are studying this semester in the McCain Institute’s Washington Policy Design Studio, a semester-long seminar that puts students in roles of a U.S. embassy in a foreign land.

“I would describe the course as very practical,” said O’Grady. “… It’s structured as you would work in the U.S. government.” 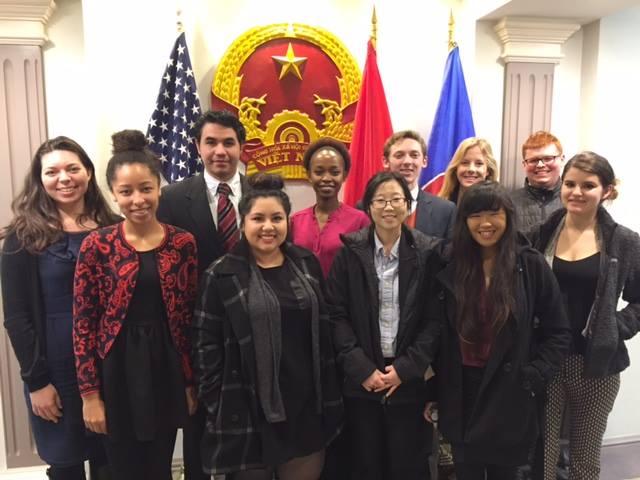 And that’s the point. The Washington Policy Design Studio, led by McCain Institute senior director Michael Polt, puts ASU students in the roles of foreign service officers abroad and asks them to do those jobs to complete the course.

This semester it’s Vietnam. By good planning, or a stroke of luck, students currently enrolled have gotten to work on an exciting event for any in-country diplomat — the impending arrival of the commander-in-chief.

But let’s back up for a second.

Students start the semester learning how embassies work. They then focus on how the specific diplomatic outpost they’ll be studying works.

And they’re each assigned a job to do as part of the class, with a real counterpart in the embassy they’re focusing on. They interact, via email and occasional phone calls, with the people who actually hold the jobs into which the students are taking a deep dive.

Murphy’s role in the class is as the deputy chief of mission — the No. 2 — for Embassy Hanoi. He has forged a great relationship with the actual DCM some 8,000 miles away.

“She’s been pretty frank about what it was like to work on the ground,” Murphy said, “and that’s been really insightful.”

In the class, the students research the bilateral relationship between the two nations, respond to issues in real time, and work on many of the same things the actual embassy is focused on — hence the preparations for Obama’s trip.

And though their recommendations aren't actually going to the White House, they're tackling the same problems that real foreign service officers are facing as they're facing them.

Kinyanguli, who is from Tanzania, is the foreign commercial service officer in the Washington Policy Design Studio version of the Hanoi embassy. That means her work for the class deals with the trade relationship between the U.S. and Vietnam, and she thinks about ways to ensure that the embassy is helping create jobs for Americans.

“Everyone has a role to play,” said Kinyanguli, whose career aspirations have shifted more toward foreign policy since enrolling in this class. “You have to contribute to the whole team. Without you, the work is not done.”

On Wednesday, students will give their final presentations to a panel of seasoned diplomats including a former U.S. ambassador to Vietnam.

That’s a lot of pressure, but the real jobs are pressure-filled as well.

“[We want to] teach them some of those skills of good speaking, good writing, clear thinking, perpetual learning, solid management and leadership skills that will serve them well no matter what professional capacity they plan to function in after they leave the university,” Polt said.

“We want to provide access for our ASU students into that exclusive club of working on foreign policy.”
— Ambassador Michael Polt, McCain Institute Senior Director

The class hews closely to the model of so many of the courses at ASU, which put practical experience on the same plane as academic knowledge.

And, actually, calling it a “class” may not give it enough credit, according to Polt.

“It’s not a class in foreign policy; it is a foreign policy development and implementation experience,” he said. “… We want to provide access for our ASU students into that exclusive club of working on foreign policy.”

And it’s working. Murphy’s point of contact in Hanoi, essentially the deputy ambassador, is supportive of his application to intern in the actual U.S. embassy in Vietnam next spring because of the rigor she knows the Policy Design Studio requires.

And O’Grady has already landed a coveted foreign service internship. This summer she’ll be in the U.S. embassy in Macedonia.

“I am really excited to put what I learned into practice,” she said.

The Mary Lou Fulton Teachers College Tuesday honored the tenth anniversary of Ira and Mary Lou Fulton’s gift to endow the school and recognized the college’s rise as a national model for teacher preparation, a home for innovative research and a game-changing partner for schools and communities to better the lives of students.“We’ve set the standard for colleges of education in the entire c...

The Mary Lou Fulton Teachers College Tuesday honored the tenth anniversary of Ira and Mary Lou Fulton’s gift to endow the school and recognized the college’s rise as a national model for teacher preparation, a home for innovative research and a game-changing partner for schools and communities to better the lives of students.

“We’ve set the standard for colleges of education in the entire country,” said Dean Mari Koerner. “And we’re only getting started.” 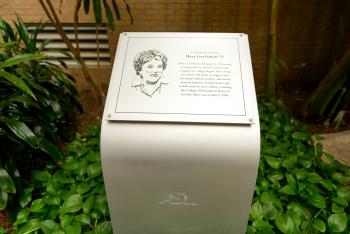 Koerner joined Ira Fulton, members of the Fulton family and ASU President Michael Crow for a celebration in the atrium of the Farmer Education Building attended by faculty, students and alumni.

The $25 million gift to the teachers college was personal for the Fultons because Mary Lou, who died last year, earned her teaching degree from ASU. Her graduation in 1975 followed a nearly two-decade pause in her studies in order to raise her family.

“My mom rode a bike to her classes at ASU,” said daughter Lorie Nicholls. “She said it was a nineteen year journey, but she finally got her teaching degree.”

Immediately after graduating, Mary Lou went on to teach reading to students in Phoenix schools.

“Those children were precious,” she said in 2003, “and I learned more from them than they did from me.”

While she touched the lives of hundreds of students, her legacy of education continues at the same teachers college where she earned her degree.

Since the Fulton family’s gift, the teachers college created an award-winning teacher preparation program that educates more than 1,000 new teachers each year. The unique iTeachAZ program places teacher candidates in schools for a full-year senior residency and better prepares future teachers by giving them practical learning experiences. The program, lauded by schools, districts and the U.S. Secretary of Education, is reshaping how schools of education teach future generations of educators.

The college’s impact extends far beyond campus to the thousands of students learning from the college’s graduates and to its 300 partner schools in Arizona.

ASU President Michael Crow told Tuesday’s crowd how the college, in tackling critical challenges in education, has taken on the mission of creating a steady supply of educators capable of preparing future generations of citizens in Arizona and beyond.

“The teacher determines the success of our society,” Crow said. “What we’ve been able to do here is devote ourselves to creating the best teacher possible who will be able to go out and affect thousands of lives.”

The college is already marching into a second decade of meeting the challenges facing U.S. education, expanding its role as a nationally recognized leader in teacher education, creating interdisciplinary knowledge and research and securing in its role as a place where young people grow into passionate educators and transformational education leaders.