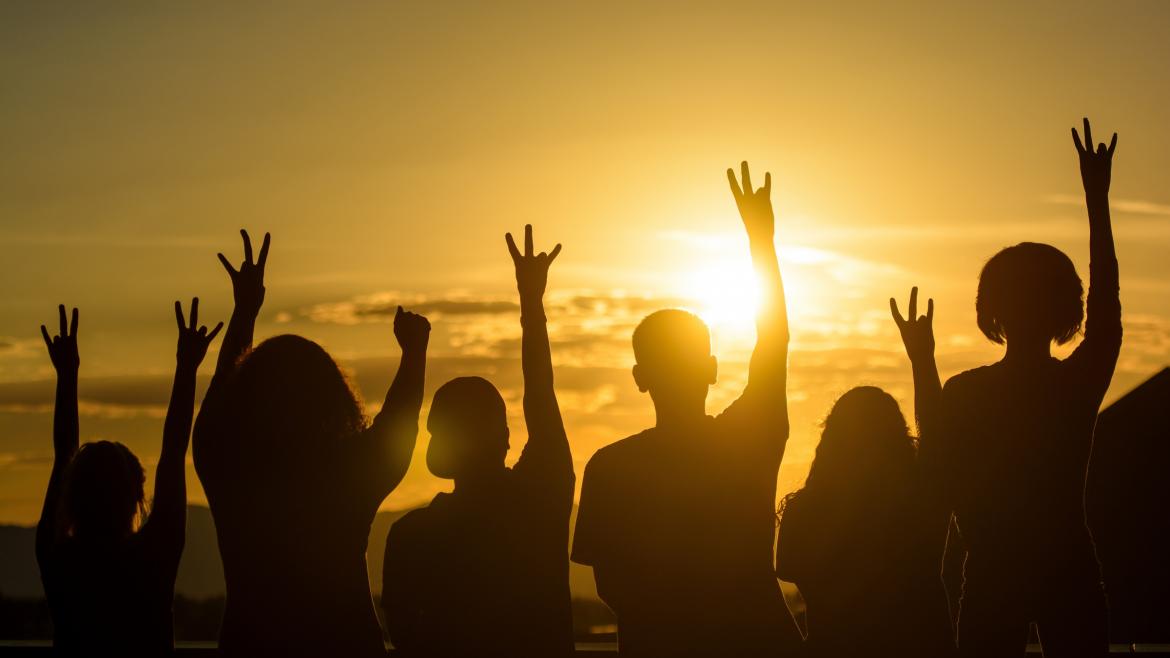 The pinnacle of their class

Maggie Zheng performed her first surgical procedure when she was just a preschooler.

Granted, it was on one of her stuffed animals.

But in hindsight it was a relevant precursor to where she finds herself today: one of an elite group of winners of this year’s Flinn Scholarship, who will be attending Arizona State University in the fall.

Zheng, who will study biomedical sciences in the College of Liberal Arts and Sciences, has loved the idea of being a doctor since she was child watching medical shows on public television. 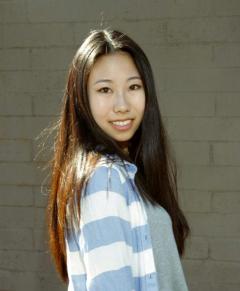 “I just always found it really fascinating, so I want to become a surgeon,” said Zheng (left).

Flinn scholars are chosen based on merit and receive more than $115,000 to use towards tuition, room and board, and study abroad expenses. They also get support for off-campus internships and are paired with faculty mentors.

The Flinn scholars coming to ASU will attend Barrett, the Honors College.

“The Flinn Scholarship is an important investment in keeping Arizona’s finest and most highly qualified students in-state,” said Mark Jacobs, dean of Barrett, the Honors College. “We are pleased to welcome them to ASU.”

Zheng’s passion for (and early foray into) medicine is not the only thing that caught the attention of the Flinn Foundation — or, for that matter, the attention of Yale, NYU, the University of Chicago and Rice, some of the other schools to which she was accepted.

The high school senior has composed three full orchestral pieces working with the Tucson Symphony Orchestra (“I play the piano, but I can compose for basically the whole orchestra.”) and is active in the Women’s Foundation of Southern Arizona and has been involved with the Metropolitan Education Commission since the seventh grade.

She’s not alone in her exceptionalism.

One of her future classmates is Yisha Ng, who has been hooked on space as a result, at least in part, of growing up near the Lowell Observatory in Flagstaff.

She wants to work in space exploration — whether it’s NASA or one of the other new space-based companies that have appeared in recent years.

“But NASA is my dream job,” she said. 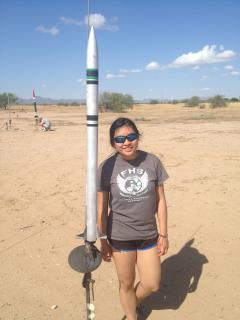 She has chosen ASU to help her get there. She’ll enroll this fall as an aerospace engineering student. She may have a little bit of a head start, having built a rocket (picture left) as part of a capstone project in high school.

She also plays violin, earned a black belt in a Hawaiian mixed martial art called kajukenbo, and switched to diving after an injury sidelined her from gymnastics — getting her high school to reinstate its diving program in the process. She also helped resurrect her school's speech and debate team and travels next week to a national tournament.

She’s finishing up her senior year at the BASIS Scottsdale high school, a charter school focused on the STEM disciplines. And although her school has had an intense focus on science, technology, engineering and math, Mohan has continued to grow her love of the arts, founding the school’s first a cappella club, becoming an accomplished violinist, and performing and teaching Indian classical dance. 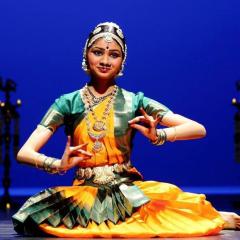 Mohan (left) chose ASU because she’ll be able to be “completely immersed in this wonderful performing arts program while also being a business major,” something that other schools to which she was accepted would not have made so easy.

“The other schools are fantastic, but none of the other programs had the ‘anything you want, anything you need, and it’s here for you to use’ mentality here at ASU,” she said.

Mohan hopes to someday open and run her own theater company that tailors to performers of color, like her.

Many of the incoming Flinn scholars share a desire to make the world better for those around them.

Martín Blair spent a portion of his high school career getting his classmates and teachers excited about sustainable transportation — like carpooling and riding bikes to school or work.

But he took it a step further. 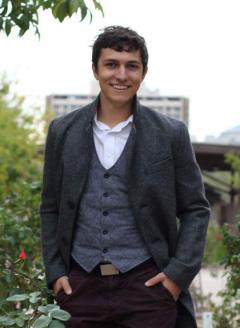 “I built a hybrid electric vehicle that they could use as inspiration,” said Blair (left). “... The students are having a lot of fun with it, and it’s being used as a teaching implement.”

Blair, a rock climber, snowboarder, surfer, archer and Eagle Scout, will study to be a mechanical engineer in the Ira A. Fulton Schools of Engineering, which he hopes will lead to further work as a systems engineer.

“I’d like to get a PhD in systems engineering at ASU,” he said, “and consult with different businesses and spread my efforts to help design the best products we can so we can have a better world.”

A lofty goal, but he and his Flinn cohort see ASU as a good place to start.

The Flinn Scholars headed to ASU:

Aidan McGirr is going to study astrophysics in the School of Earth and Space Exploration. He attends Anthem Preparatory Academy.

Martín Blair is coming to ASU from the Phoenix Union Bioscience High School. He’ll study mechanical engineering in the Ira A. Fulton Schools of Engineering.

Rohini Nott, currently at BASIS Chandler, will major in biology and society in the School of Life Sciences.

Cameron Carver at Sabino High School in Tucson will be a mechanical engineering student in the Fulton Schools.

Anagha Deshpande, currently at Hamilton High School in Chandler, will study genetics, cell and developmental biology as a biological sciences major in the School of Life Sciences.

Margaret “Maggie” Zheng will study biomedical sciences in the School of Life Sciences. She attends University High School in Tucson.

Yisha Ng wants to be an aerospace engineer. She’ll study in the Fulton Schools. She’s currently at Flagstaff High School.

Enrique Favaro, in high school at the Tempe Preparatory Academy, is going into accountancy at the W. P. Carey School of Business.

Vaibu Mohan, focusing on the STEM subjects at BASIS Scottsdale, will immerse herself in performance and musical theater in the Herberger Institute for Design and the Arts.

The W. P. Carey School of Business at Arizona State University will present John H. Hammergren, chairman, president and chief executive officer of McKesson Corporation, with its prestigious Executive of the Year Award this week.The school is bestowing its highest honor on Hammergren in recognition of his exemplary performance as chairman and CEO of the global health-care company. The award annuall...

The W. P. Carey School of Business at Arizona State University will present John H. Hammergren, chairman, president and chief executive officer of McKesson Corporation, with its prestigious Executive of the Year Award this week.

The school is bestowing its highest honor on Hammergren in recognition of his exemplary performance as chairman and CEO of the global health-care company. The award annually recognizes top executives who serve as exceptional models for future business leaders. 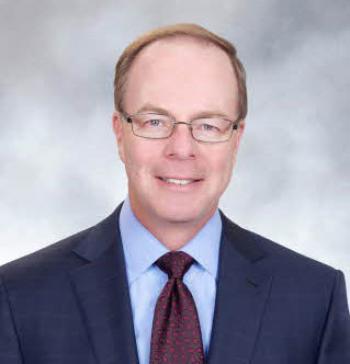 Under Hammergren’s leadership as CEO for the past 15 years, McKesson’s revenues have quadrupled to $179 billion while the health-care firm has expanded its footprint into international markets and new industry sectors. Today, the 183-year-old company ranks No. 11 on the Fortune 500 and employs more than 80,000 people.

McKesson is a portfolio company that has a presence in more than 20 countries and provides services and technology in all parts of the health-care ecosystem. Hammergren has spent his entire career in health care, having landed his first job as a hospital-supply sales representative as a new college graduate.

“John Hammergren has demonstrated outstanding and sustained leadership in a health-care environment that is ever changing,” says W. P. Carey School of Business Dean Amy Hillman. “He led McKesson from crisis to becoming a global leader in health-care services and information technology. Under his stewardship, McKesson has not only delivered outstanding returns for its investors, but successfully help health-care organizations deliver better care to their patients on a daily basis.”

Hammergren, who has been with McKesson for 20 years, was recently named one of Harvard Business Review’s 100 “Top Performing CEOs in the World.” In 2015, Hammergren was named 2015 Best CEO for the health-care technology and distribution segment by buy-side analysts, money managers and sell-side researchers. Under his leadership, McKesson has been named one of Fortune Magazine’s Most Admired Companies for more than a decade. He is also co-author of the book, "Skin in the Game: How Putting Yourself First Today Will Revolutionize Health Care Tomorrow," which focused on the consumers’ role in health-care reform.

”I am honored to receive this award from W. P. Carey School of Business,” said Hammergren. “I’ve been very fortunate to have a long and successful career in an industry that touches people’s lives on a daily basis. And for the past 15 years, I’ve been privileged to lead an incredibly talented group of people at McKesson who are all united behind our company’s mission of better health.”

One of the foundational elements of Hammergren’s leadership has been the core set of values that he instituted early on in his tenure. McKesson’s ICARE values — which focus on doing what is ethically right, always putting the customer first, personal accountability, mutual respect and excellence — have guided the culture and success of the company since he took the helm.

Hammergren becomes the 33st annual Executive of the Year chosen by the Dean’s Council, a national group of prominent executives who advise the W. P. Carey School of Business. The award honors business leaders who have created and sustained superior organization performance, and whose presence exemplifies a model for future business leaders.  Previous honorees include Howard Schultz, chairman and chief executive officer of Starbucks Coffee Company; Alan Mulally, president and chief executive officer of Ford Motor Company; and Mike Ahearn, chairman of the board of First Solar, Inc.

Hammergren will be honored at a luncheon at the Camelback Inn in Scottsdale, Arizona, on April 21. The event is part of the Economic Club of Phoenix speaker series. For more information about the club, call 480-965-6568 or visit www.econclubphx.org.