In many animal species, physical battles and other aggressive acts determine a certain “pecking order.” In the world of ants, fights that involve biting and restraining often determine winners and losers.

But what about battles that do not result in a pecking order, but instead lead to groups of winners and losers? Does this require a new type of aggressive interaction? 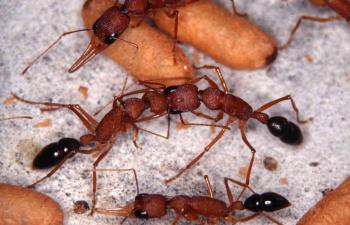 One ant dominates another by biting the head. Photo by Juergen Liebig Download Full Image

“We were curious as to whether dueling behavior in ants results in a winner and a loser, or if it is a winner-winner interaction that allows workers to express aggression without requiring a loser,” said Jürgen Liebig, associate professor at Arizona State University’s School of Life Sciences and senior author of a new study published in the current online issue of American Naturalist.

To help answer this question, the researchers developed a new computer model to manipulate several ant behaviors and to see how they affected the social structure of a colony.  This model explains the complexity and diversity of social hierarchies in ants.

The scientists began by examining the behaviors and social hierarchy of the Indian jumping ant (Harpegnathos saltator). When a colony’s queen dies, the female workers engage in ritual fights to establish dominance. Although these battles can be fierce, they rarely result in physical injury to the worker ants. Ultimately, a group of approximately 10 workers will establish dominance and become a cadre of worker queens called “gamergates.”

A social hierarchy like this is called a “shared-dominance hierarchy.” Other ant societies establish pecking orders in which one individual is dominant and all others share a subordinate status.

The researchers identified three behaviors related to establishing a hierarchy in this ant species: biting, in which one ant bites another’s head, has a clear winner and loser, with the winner establishing dominance; policing, in which subordinate workers restrain challengers to a dominant individual; and dueling, in which two individuals engage in a martial display with their antennae, but which has no clear loser.

“We see examples of all three types of social hierarchies in various ant species, but we also see them throughout the animal kingdom and we know that shared-dominance hierarchies can be found in animal societies from lions to dolphins,” said Clint Penick, postdoctoral researcher at North Carolina State and lead author of the study. “We think the presence or absence of winner-winner behaviors may be an important factor in determining the nature of dominance hierarchies for a wide variety of species.”

Other authors of the study include: Takao Sasaki, co-lead author with University of Oxford; and Zachary Shaffer, Kevin Haight and Stephen Pratt of Arizona State University. 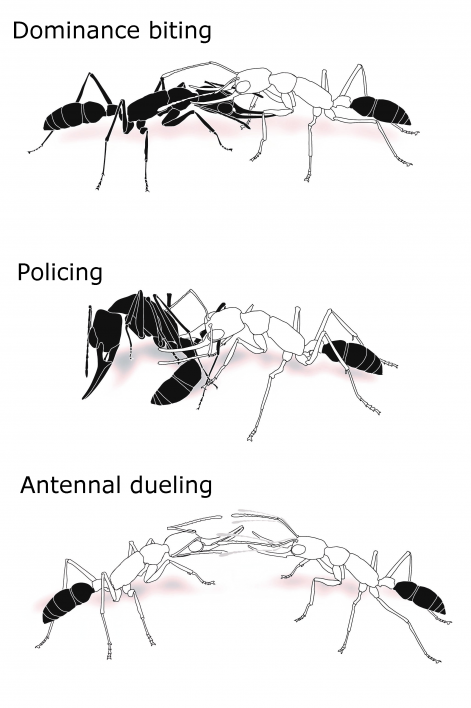 This week, Knowledge Enterprise Development at ASU launched ASU KEDtalks, a series of conversations for curious minds. KEDtalks are the bridge between your curiosity and what ASU researchers are exploring and discovering. KEDtalks spark ideas, indulge curiosity and inspire action. These are “aha!" moments and stories that are shared at dinner parties, around the water cooler, and over a cup of c...

This week, Knowledge Enterprise Development at ASU launched ASU KEDtalks, a series of conversations for curious minds. KEDtalks are the bridge between your curiosity and what ASU researchers are exploring and discovering. KEDtalks spark ideas, indulge curiosity and inspire action. These are “aha!" moments and stories that are shared at dinner parties, around the water cooler, and over a cup of coffee. They connect you to others like you – people who care and want to know more. We are delighted that you are here as a fellow explorer. 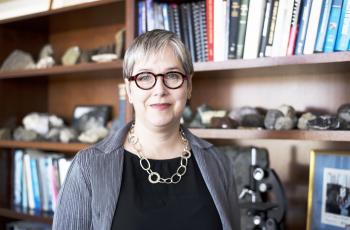 Lindy Elkins-Tanton, director of the School of Earth and Space Exploration, discusses her proposed space mission in the first ASU KEDtalk

Lindy Elkins-Tanton, the director of the School of Earth and Space Exploration, is the first KEDtalk featured researcher. Elkins-Tanton is the principal investigator for a mission currently under consideration by NASA to explore Psyche, a massive asteroid composed primarily of nickel and iron, and located in the Asteroid Belt between Mars and Jupiter. Psyche may be one of the best ways to understand the interior of our own planet. In her KEDtalk, Elkins-Tanton discusses the proposed mission, why humankind should continue to explore space, and why it is okay to not quite know where your path in life might take you. And there's more with Elkins-Tanton in the KEDtalk podcast.