Are we entering an age of killer robots?

ASU researcher among those clarifying what is, and isn't, possible at UN conference

The world’s militaries are close enough to wielding weapons that decide on their own whether to kill — called Lethal Autonomous Weapons Systems — that the United Nations this week gathered a select few experts, including an ASU researcher, to separate fact from fear of robot overlords.

Dr. Heather Roff, research scientist with ASU’s Global Security Initiative and current Oxford senior research fellow, is testifying on the unintended risks of such weapons, and where many autonomous or semi-autonomous weapons currently exist. Her research focuses on artificial intelligence and human control. 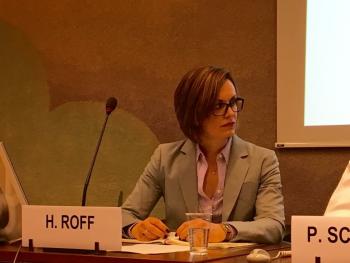 Dr. Heather Roff, researcher at ASU's Global Security Initiative, testifies at a UN meeting of experts to consider lethal autonomous weapons. Dr. Roff's testimony focuses on unintentional risks of autonomous weapons systems, including artificial intelligence and human control. The meeting is being held under the auspices of the Convention on Certain Conventional Weapons from April 11-15 in Geneva. Photo courtesy of Heather Roff Download Full Image

Question: Why would we want weapons systems that control themselves? Do we have some already?

Answer: There are real potential advantages for the use of autonomous weapon systems (AWS), including force protection and low cost — in both monetary and human terms. There is also the increased ability to maneuver in “denied” environments, like underwater or in areas with jammed communications. In this way, AWS could be a “force multiplier” — that is, maximizing the effects and impacts of force without having a person to do it. However, the concerns outweigh these potential benefits. Use of AWS could lead to an artificial-intelligence “arms race,” where states attempt to realize stronger and stronger AI to outmatch their opponents. This alone is troublesome, but there are other grave risks too, such as the risk of malfunction or fratricide, the escalation of a conflict, increased levels of deniability, stressors on accountability and the potential for mass surveillance of populations. The potential for mass human-rights abuses overshadows short-lived advantages in a denied warfighting space.

Q: Are we at risk of a real-life Skynet?

A: The key issue here is whether states want to delegate the decision to kill to a machine. If they do not want to relinquish that authority to a tool, and reserve that only for human beings, then they cannot support AWS. I understand that many people may think of AWS as some sort of precursor to “Skynet,” but I don’t think that is a helpful analogy. If we jump from AWS — something that can engage and fire without human intervention — to Skynet, then we fail to see the issues that are in front of us now: systems that may not be easily testable under combat conditions, are not verifiable, may not be predictable or reliable, systems that would breed incentives for human-rights abuses, or could trigger conflicts due to unintended engagements.

Q: When we think about autonomous weapon systems, people may think of “drones.” Are they right?

A: AWS are not “drones.” A remotely piloted aircraft — or RPA — is piloted. In other words, there is a human there from the outset.  Not only is a human piloting the aircraft, there are many other humans engaged with the operation of and decision to use lethal force. As to whether “drones” would become autonomous, the answer is “sure.” Autonomy is a capability. With the right software, we can make unmanned systems autonomous. Look to, for example, the U.S. Navy’s swarm boats or Google’s self-driving car. The difference, however, is that those vehicles are not armed and making lethal decisions. I think autonomy will challenge diplomacy because of difficulties with transparency, signaling intent between states, showing resolve and permitting confidence-building measures. The ubiquitous use of these systems could change the face of conflict in ways we don’t yet fully understand.

To schedule an interview with Dr. Roff, please contact Logan Clark at the ASU Office of Media Relations and Strategic Communications at mediarelations@asu.edu.

The times — and the paper — have changed a lot in six decades, but the experience of helming the State Press is as rewarding now as it was 60 years ago, agreed the news men and women gathered for an editors reunion luncheon hosted by the Arizona State University Alumni Association. The oldest editors in the room came from the days of print afternoon editions, pulling wet-ink copies off the pr... 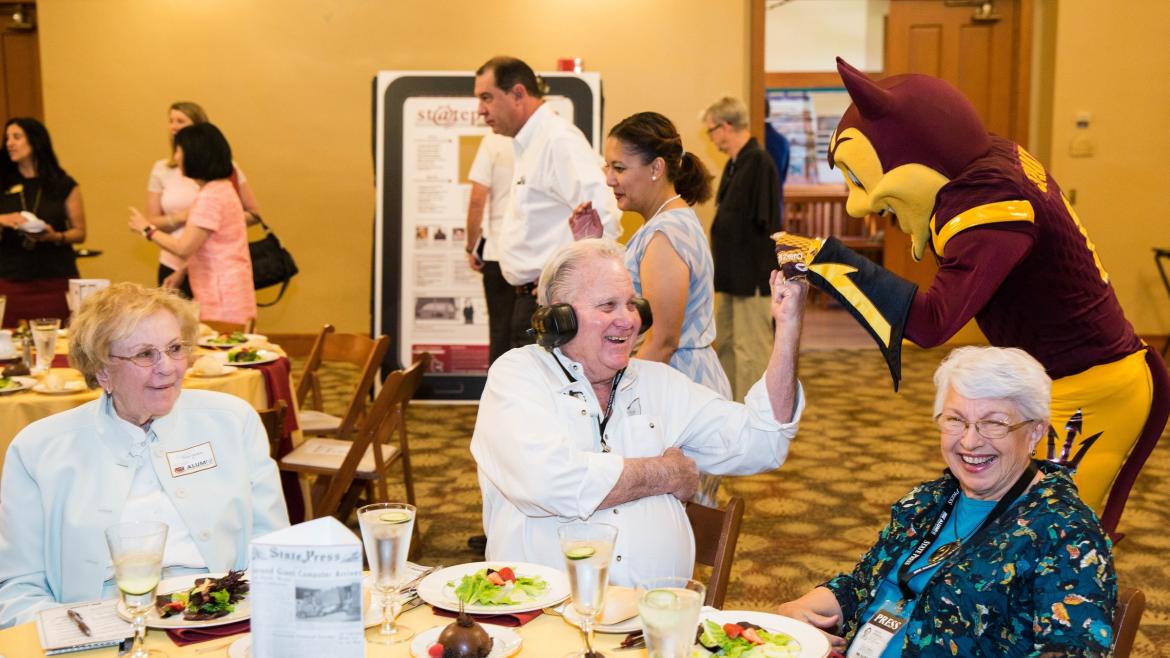 The times — and the paper — have changed a lot in six decades, but the experience of helming the State Press is as rewarding now as it was 60 years ago, agreed the news men and women gathered for an editors reunion luncheon hosted by the Arizona State University Alumni Association.

The oldest editors in the room came from the days of print afternoon editions, pulling wet-ink copies off the press and laying papers out on a stone.

The youngest editors publish editions that will never exist on paper, cover multiple campuses instead of one and run dual newsrooms.

What has never changed is the stress and rewards of putting out a paper five days a week, and the camaraderie of slaving to learn the craft in a gloomy basement full of junk and steel desks. Editors, reporters and photographers from across the country and globe grew up in that basement, going off to wire services, metropolitan dailies and small-town weeklies.

“I fell in love with newspapering,” Don Dedera, editor in 1951 (pictured above fist-bumping Sparky), said of his experience. “We used to put it out on Mill Avenue at the Tempe Daily News. A lot of it was self-hypnosis, but we thought it was a calling. We were like a priesthood.”

Dedera went on to become the Arizona Republic’s star columnist, the editor of Arizona Highways (“It very nearly killed me, but I enjoyed it”), and the author of 26 books and more than 6,000 articles. He is most noted for a series of columns he wrote in 1960 that led to the parole of the Power brothers, two men wrongfully imprisoned for more than 40 years after the deadliest gun battle in state history. ASU Archives and Special Collections has his papers in Hayden Library.

Dedera’s most significant contribution to State Press history was taking it from a weekly to a biweekly.

“You know how we did that?” he said. “We doubled cigarette advertising. When I went to school here, everyone smoked, in class and out, including the professors. You just about choked to death. No one was about to tell these veterans whether they could smoke or not. They’d just come back from kicking Hitler’s ass.” “Some of the thinking wasn’t so great, and some of the writing was awful,” reflected Jay Heiler, editor-in-chief from fall 1982 to spring 1983, now chair of the Arizona Board of Regents and founder and board president of Great Heart Academies. “It has to be one of the best formative experiences for any student at any university.”

Heiler described putting out a daily paper and “feeling the weight of institutional responsibility.”

“The process of producing a daily newspaper has infinite value in the formation of a student,” he said, calling the Press “an always-lively source of news and commentary.”

Ray Stern was editor-in-chief in fall 1997. Stern is a veteran reporter at the Phoenix New Times who has won the state’s top investigative journalism award and a slew of other recognitions, as well as being named blogger of the year for the past five years.

“The State Press was instrumental to my career,” Stern said. “It brought me real-world exposure — trial by fire. I encourage every student journalist I talk to to at least freelance there, if not work there.”

Stern called it a better place to make mistakes than reporting professionally in the real world. “As a student, you need that cushion,” he said.

Another favorite memory for Stern: “the ambience too — down in the basement.”

Shelby Slade, class of 2016 and the current editor-in-chief, said the mission remains the same: “a news source that keeps students informed and the university accountable.”

“We still have sketchy sources and flaky reporters,” she said.

The State Press is “where I’ve had some of my favorite college memories,” said Slade, speaking for everyone in the room. “Yes, the basement is crusty, and it doesn’t get a lot of sun.”

“I’ll leave knowing I did something that mattered,” Slade said.