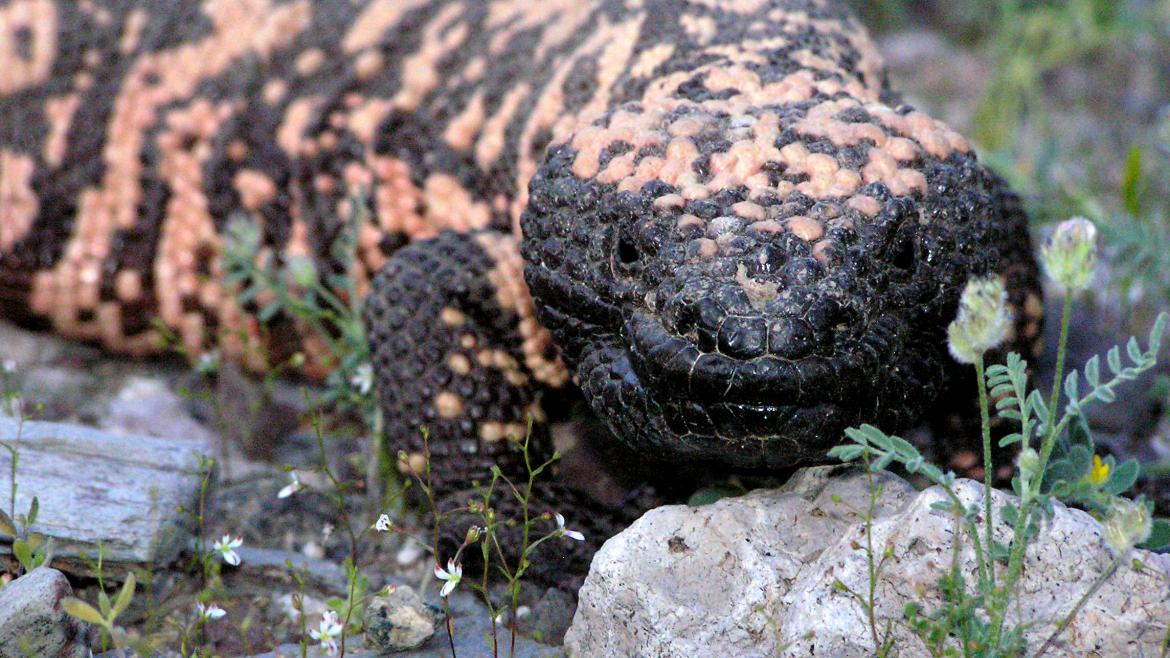 It was her very first encounter with a strangely beautiful orange and black beaded Arizona native, the Gila monster — one of only two venomous lizards in the world — that convinced Melissa Wilson Sayres to divert from her 11-year path of studying mammal genomes.

One of Wilson Sayres’ main interests is in studying sex chromosomes. So when she found out that a Gila monster’s sex determination system is the opposite of humans — whereas human males have X and Y sex chromosomes, it is the female Gila monster that has two different-shaped chromosomes — that piqued her interest in the venomous lizard.

The more she learned about the Gila monster — “They store fat in their tails, they’re underground for 11 months a year, they’re venomous, but they don’t use their venom like snakes do,” she said — the more Wilson Sayres, an assistant professor in the School of Life SciencesThe School of Life Sciences is an academic unit of the College of Liberal Arts and Sciences. and researcher in the Biodesign Institute’s Center for Evolution and Medicine, was intrigued.

There is much not yet known about this shy creature, even though human-health uses have been found for its venom. Wilson Sayres and her collaborators have launched a crowdfunding campaign on experiment.com hoping to raise just under $9,000 to develop the very first reference genome for the Gila monster.

Snakes attack and use their venom to subdue their prey, but Gila monsters don’t need to do that, because they raid nests for their food, Wilson Sayres explained.

“We don’t understand why they’re venomous, and yet their venom is unique, and special in the animal kingdom,” she said.

One unexpected application is to advance human health. Gila monster venom contains a protein, the synthetic form of which has been used to successfully treat type 2 diabetes by helping regulate blood sugar and increase insulin response.

“Moreover what’s fascinating is that we don’t know anything about the Gila monster genome,” Wilson Sayres said. “There are more than 3,000 more species of reptiles than there are mammals, but we have 20 times as many mammalian genome sequences than we do reptile sequences. This means that if you are interested in studying reptile biology ... trying to find a closely related species for comparison is extremely difficult.”

Imagine setting out to study humans, because they are interesting, but the closest related species to humans that you have with a genome is a kangaroo, Wilson Sayres said.

Gila monsters have already proven to be instrumental in improving human health, and yet very little is known about their genetics. Photo courtesy of Melissa Wilson Sayres

The crowdfunding effort runs through the end of April.

“If we are successful with this crowdfunding campaign, it will be the first attempt at scaffolding for generating a reference for the Gila monster genome,” Wilson Sayres said. “A large-scale genome project takes about $30,000 — it’s quite expensive. In this project we’re just getting the first stage of it.”

If they receive the funds they need, Wilson Sayres and her team will first sequence a reference genome from one individual that they can use to compare Gila monsters with other reptiles, and then they will sequence the DNA of six other Gila monsters to look at genetic variation within the species.

Collecting DNA samples presents a unique challenge — Gila monsters are venomous and shy, which means that they are difficult to locate in the desert, and although it takes a lot to get one to bite you, their bite has been described as lava pouring through your veins, or being hit repeatedly with a thousand hammers.

Luckily for Wilson Sayres, she works next to Dale DeNardo, a physiologist in the School of Life Sciences who has, in the course of studying reptilian adaptations, adopted 18 Gila monsters. He will be contributing his years of Gila monster knowledge to the project, along with the needed blood samples. 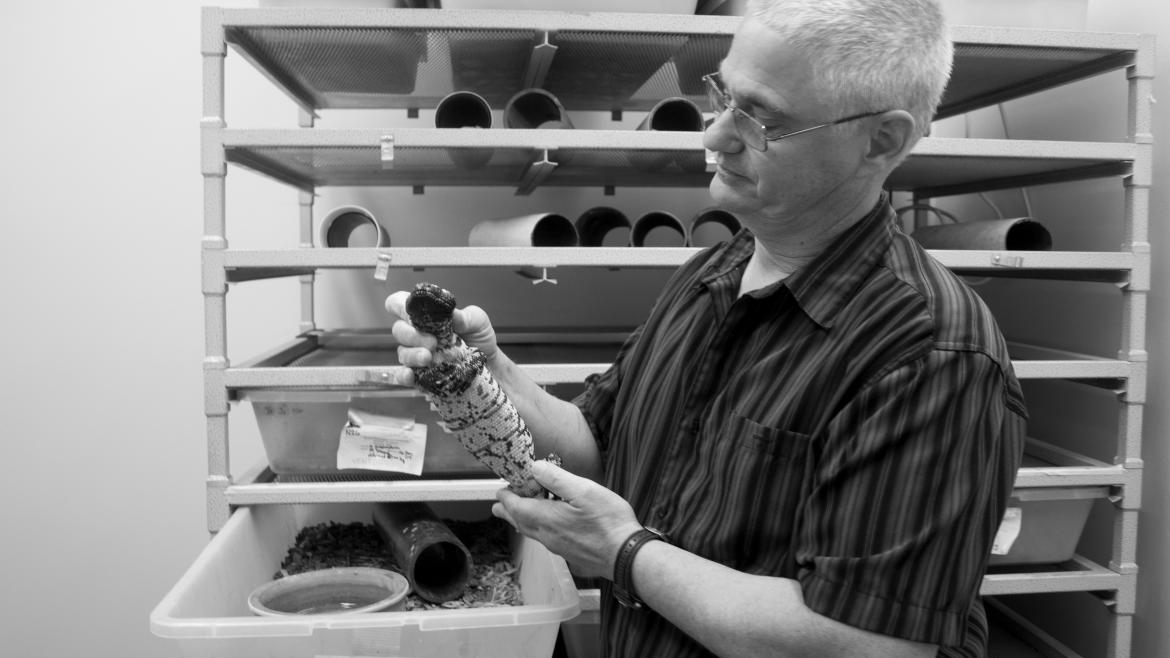 Gila monsters that are removed from
their territory cannot be relocated
to a different part of the Sonoran desert
because they typically do not survive
the move. Dale DeNardo, a physiologist,
has adopted 18 such Gila monsters.

“I’m excited about the genome because it builds the ability for collaboration,” said DeNardo, “and only with collaboration do we really start understanding the complexity of things.”

If researchers from different scientific backgrounds study the same animal, what a behaviorist discovers about the species may be different from what a physiologist, biologist or ecologist may discover. This is because genetics, hormones, behavior, water availability, physical adaptations and the environment all play a role in how animals make survival decisions.

As a physiologist, DeNardo studies resource limitations, like energy and water scarcity, temperature extremes, and how animals, like Gila monsters and rattlesnakes, cope with these limitations and extremes in their environment.

“For what I do, as a physiologist, a genome isn’t as critical,” said DeNardo, “but to expand what I do, to better understand it through colleagues like Melissa, having that genome becomes a very valuable tool.”

Wilson Sayres is not sequencing the Gila monsters genome for the sake of sequencing another species, DeNardo said. Because of the work he already does studying this venomous lizard, there is potential for the genome to be a very useful tool.

“A lot of my work demonstrates that, this is not just going to be something that sits out there and collects dust,” DeNardo said.

For the third consecutive year, Arizona State University partnered with the Valley of the Sun United Way to present Sun Devils UNITE on April 3-9 across ASU’s campuses, raising awareness and money for Arizona’s most underserved populations.“Our goal for this week is to help raise ASU students’ awareness of the community objectives through impactful storytelling, conducting community servic...

Thousands participate in largest philanthropic event of the year

For the third consecutive year, Arizona State University partnered with the Valley of the Sun United Way to present Sun Devils UNITE on April 3-9 across ASU’s campuses, raising awareness and money for Arizona’s most underserved populations.

“Our goal for this week is to help raise ASU students’ awareness of the community objectives through impactful storytelling, conducting community service, raising funds and igniting a passion for social change. Sun Devils are change-makers, and collectively we can make a huge difference,” said Nathan Baker, president of the Student United Way. 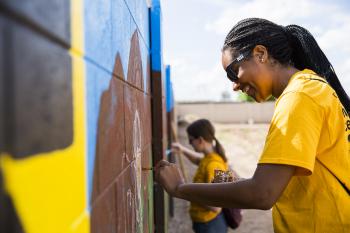 Senior psychology major Lacey Saucer helps paint a mural that runs alongside a community garden in Phoenix, along with other Sun Devil student volunteers during the Devils in Disguise day of service April 9. Photo by Deanna Dent/ASU Now Download Full Image

The weeklong humanitarian series of events addressed the most critical challenges facing surrounding communities. Sun Devils UNITE events are hosted by student organizations to raise awareness among the ASU community about the Valley of the Sun United Way and support the objectives of the organization, to include:

“It is important for students to give back to the community, because it allows us to see the community outside of our general perspective,” said Alexx McGuire, a sophomore medical studies major. “It brings the community together as one and strengthens the bonds between different levels of the community.”

The philanthropic week opened April 3 at ASU Gammage with Greek Sing, the largest and oldest charitable event presented annually by fraternity and sorority men and women of ASU. With more than 300 students participating, the Greek community teamed up to create, choreograph, direct and perform musicals to raise money to benefit the Valley of the Sun United Way.

“We are very thankful for our continued relationship with Valley of the Sun United Way,” said Nicholas Sweetman, Greek Sing co-chair and member of Delta Sigma Phi fraternity. “Our partnership has not only allowed us to directly impact the Valley, but also better educate our fellow students on local community needs while developing a stronger sense of responsibility and concern for the communities in which they live.”

Sun Devils UNITE week culminated April 9 with Devils in Disguise, the largest student-led day of service at ASU. Student organizations at ASU participate in this project by activating volunteer sites at which to engage and encourage their fellow Sun Devils to sign up and devote a Saturday to serving the local community.

The American Medical Student Association (AMSA) at ASU was one of many student organizations that volunteered during this special event. The group helped Hopefest prepare for its event, where thousands of uninsured, underinsured and underserved individuals receive free services including medical, dental and vision care.

“Devils in Disguise is important to AMSA because it helps to solidify our goals and motives in giving back to the community and be able to volunteer in aspects outside of the medical field,” said McGuire, who is an AMSA member. “It allows us to be well-rounded and see the culture of the community we live in.”

During the week, significant strides in combating hunger, homelessness and assisting children and families in the Valley were made:

• More than 300 students performed in Greek Sing, and the event raised about $100,000
• More than 1,500 students participated in the Devils in Disguise Day of Service event and performed more than 4,500 hours of service to more than 35 nonprofit community agencies
• More than 2,100 weekend hunger kits and hygiene kits were prepared, aiding impoverished youth and the homeless