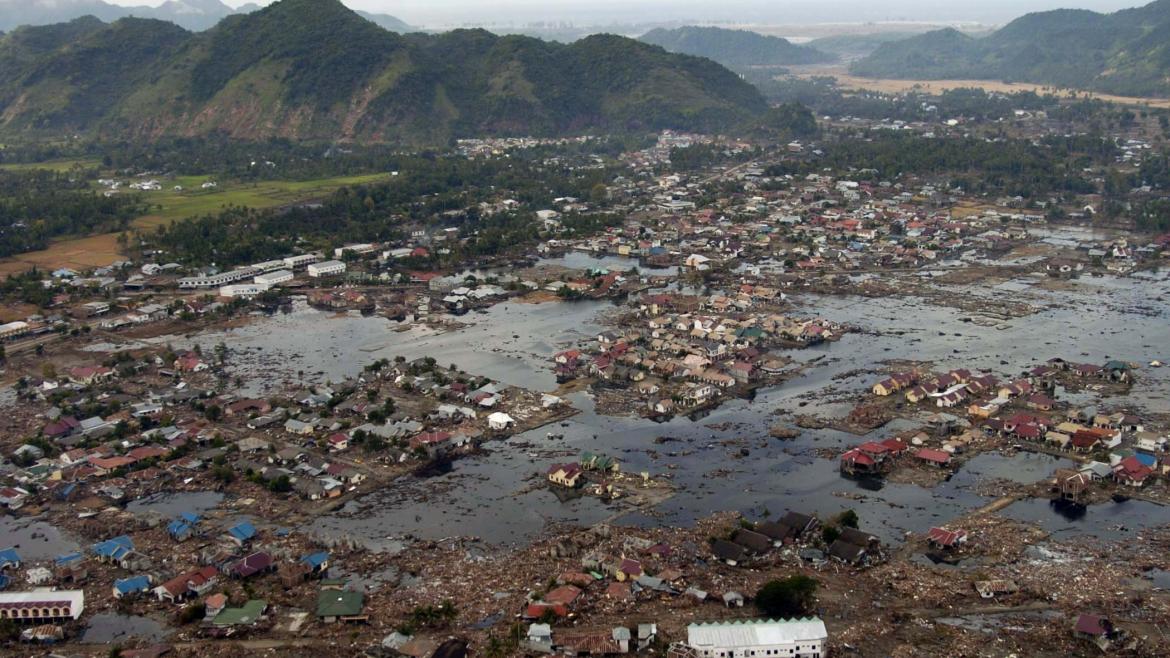 A pragmatic approach to extreme weather

ASU report argues that efforts to reverse climate change not fast-acting enough, so we must take practical steps now to blunt disasters

When a super cyclone slammed into the northeast coast of India in October 1999, winds with top speeds of 160 miles per hour and tidal surges of 26 feet battered the coast, killing almost 10,000 people and destroying the homes of millions more.

Flash-forward 14 years. In 2013, another massive cyclone developed off the east coast of India, in the Bay of Bengal. It was disturbingly similar to the 1999 event, with sustained winds of 160 miles per hour, tidal surges that destroyed fishing boats, and heavy rains that caused extensive flooding. However, remarkably, of the 13 million people affected by the cyclone, only 44 people died.

India simply decided mass deaths because of cyclones were unacceptable. The nation built cyclone-proof shelters that doubled as schools when not used for emergencies, developed contingency plans for evacuating and housing storm refugees, and improved the national weather service’s storm tracking and predictions.

Mankind is going to have to make adaptations like these to extreme weather events, according to a report issued late last month by the Consortium for Science, Policy and Outcomes, a unit of the School for the Future of Innovation in Society at Arizona State University, and the Breakthrough Institute, an Oakland-based think tank focused on modernizing environmentalism.

“Adaptation for a High Energy Planet: A Climate Pragmatism Project” argues that efforts to combat climate change won’t produce results quickly, so people need to come up with solutions to blunt disasters.

“We term it Plan A, actually,” said Daniel Sarewitz, professorSarewitz is also a senior sustainability scientist in the Julie Ann Wrigley Global Institute of Sustainability and an advisory board member for the Center for Biodiversity Outcomes in the Julie Ann Wrigley Global Institute of Sustainability. of science and society in the School for the Future of Innovation in Society and co-founder and co-director of the Consortium for Science, Policy and Outcomes, one of the report’s co-authors. “We think that’s part of the whole problem, that adaptation hasn’t been seen as inevitable and necessary. ... Reducing emissions is a great idea, but we’ve all seen how that is.” 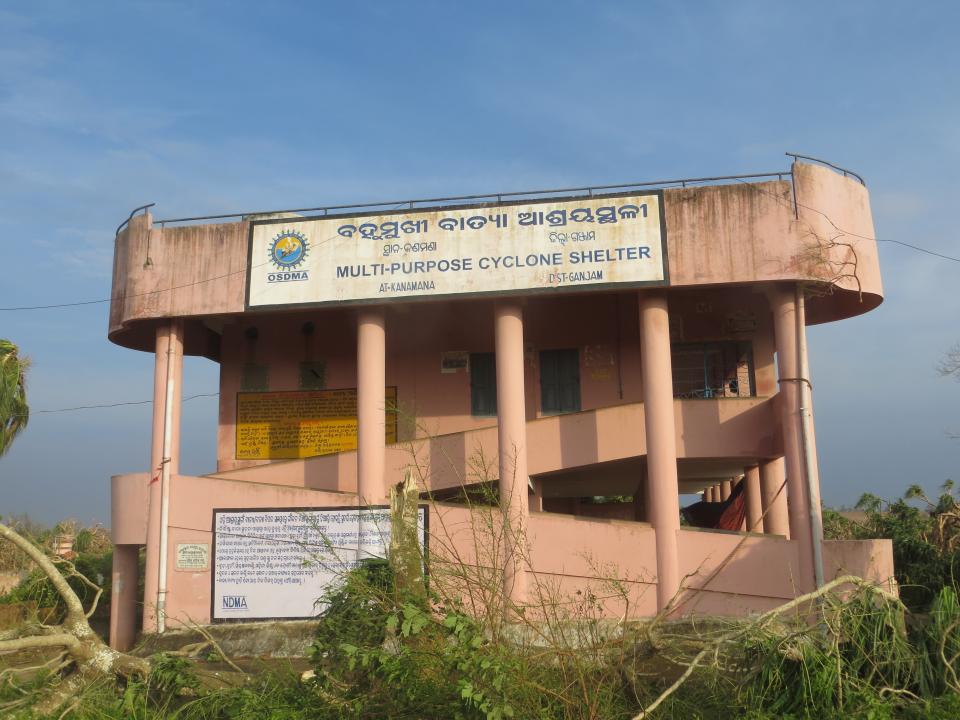 A multipurpose shelter like this one protected citizens of Odisha, India, from the worst effects of Cyclone Phailin in 2013. Photo by ADRA India

Even if actions like those taken at December’s climate talks in Paris are wildly successful, “the world is stuck with at least some warming and the consequent impacts,” the authors wrote. “Even dramatic reductions in emissions today will not significantly manifest in terms of either global temperature trends or sea level rise until late this century or early in the next.”

“There’s lot of things that can be done, and we know how to do them,” Sarewitz said. “If you lead with adaptation, you’re protecting people against climate now, plus changes in the climate in the future.”

The report examined solutions being implemented in four countries around the world. Most of them are cheap and simple.

“There’s so much arguing about climate change, but a lot of these things that can protect lives and property are not rocket science; they’re common sense,” Sarewitz said. “It feeds hope and the sense that you can deal with the problem.”

Most notably, the Dutch have been dealing with vulnerability to the natural world since the 13th century. They build flexibility into policies and infrastructure so adaptations can be adjusted to future conditions. Levees are constructed or strengthened to withstand existing flood predictions, but are also designed to be heightened in the future. The Dutch also systematically lower river levels by creating bypasses, or “room for the river.”

“There’s so much arguing about climate change, but a lot of these things that can protect lives and property are not rocket science; they’re common sense,” Sarewitz said. “It feeds hope and the sense that you can deal with the problem.”
— ASU professor Daniel Sarewitz

The Netherlands are far wealthier than the other countries discussed in the study — India, Nepal and Indonesia. Global death rates from natural disasters plummeted in the 20th century, a chart in the report illustrates. Wealth is a component of that, Sarewitz said.

“The more economically developed countries are, the more protected they are from natural disasters,” he said, citing better housing, stringent building and land-use codes, more comprehensive emergency management and response, and simply more economic wherewithal to protect themselves. “The fact is we’re much better prepared because of the wealth of industrialized society, and that’s what the numbers are showing.”

When the 2004 Indian Ocean tsunami hit, inhabitants of one Indonesian island knew to head into the mountains when they saw the ocean retreat. That life-saving knowledge had been passed down from generation to generation since a similar event in 1907.

“Several programs since then have sought to educate coastal communities about what to do for the next tsunami, using social networks and institutions to provide information, rather than high-tech measures that fail to reach everyone and have proven to be unreliable,” the report read.

However, it could be impossible for coastal residents to reach higher ground, especially if they’re living in a densely populated city. So, Indonesian authorities in one city decided to bring the higher ground to them.

“A half-dozen elevated parks in the Indonesian city of Padang could save as many as 100,000 people from the threat of inundation,” the report noted. “Simple, relatively inexpensive, and reassuring to the city’s inhabitants, this innovation depends more on knowledge of a particular social and institutional context than of the science of tsunamis or complex models of how they work.” 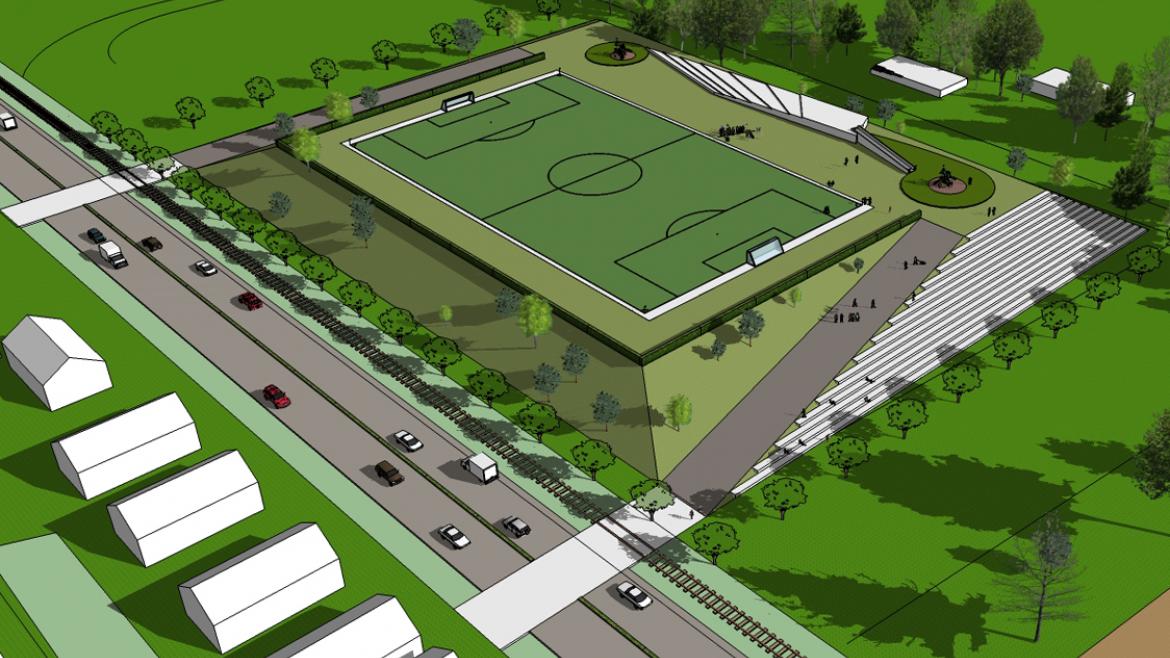 The conceptual drawing for
an elevated Tsunami
Evacuation Park in Padang,
Indonesia.

Shaped like pyramids, the elevated parks are home to soccer fields and other amenities.

“It’s important to be clear about the kinds of things humans can accomplish,” Sarewitz said. “You don’t have to be rich to get this stuff right.”

Nepal suffers from a highly variable climate. The government partnered with farmers and researchers in a collaboration to enhance rice plant breeding and seed production. The result was the development of hardy rice varieties in a region of Nepal that has had historically poor production because of climate swings.

“These arrangements are crucial contributors to Nepal’s capacity to recover from the tremendous destruction of the 2015 earthquakes,” the report read.

“There’s all sorts of aspects to this; it’s not just a technological problem,” Sarewitz said. “What we’d really like to see is policymakers and the media realize that there is a different, more hopeful way to look at the problem, and it points the way towards solutions.”

Top photo: Aceh in Indonesia, the most devastated region struck by the 2004 tsunami. Photo by U.S. Navy

The word “breach” can be used in many different ways. Legally, “breach of contract” is the failure to observe an agreement. It can also mean a gap in a wall or barrier. Breach can also be used as a verb — especially when it comes to the act of a whale breaking the surface of water.Santa Fe-based artist Courtney M. Leonard grew up in the Shinnecock Nation of Long Island, New York, where c...

The word “breach” can be used in many different ways. Legally, “breach of contract” is the failure to observe an agreement. It can also mean a gap in a wall or barrier. Breach can also be used as a verb — especially when it comes to the act of a whale breaking the surface of water.

Santa Fe-based artist Courtney M. Leonard grew up in the Shinnecock Nation of Long Island, New York, where culture historically revolved around whaling and water. Leonard’s exhibition “Breach: Log 16,” on view April 16 through Aug. 6 at the ASU Art Museum Ceramics Research Center and Brickyard Gallery, is an exploration of historical ties to water and whale, imposed law and a current relationship of material sustainability. 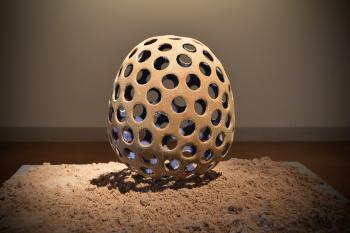 This immersive multimedia exhibition includes a two-channel video installation that Leonard created during a unique art residency that occurred in 2015 on the Charles W. Morgan, a recently restored 1840’s whaling vessel based in Mystic, Connecticut. While on the boat, Leonard marveled not only at the intense hand-hewn physicality of the boat itself but also at the work routines of the sailors.

Clay is essential to Leonard’s art. Her work is intensely crafted using a variety of techniques and natural clay drawn from Native American traditions, including the use of sparkling micaceous clay that is often used for cooking vessels. The ceramic work in “Breach: Log 16” makes reference to images and themes as diverse as whales’ teeth, scrimshaw and traditional indigenous fishing baskets. All of these relate to the sustainability and availability of water, but also to the sustainability of culture and tradition.

“Courtney M. Leonard is one of the strongest emerging voices in the field of ceramics today,” said Johnson. “Her art manages to be both poetic and political, and also simultaneously personal and universal. ‘Breach: Log 16’ is meticulously crafted to contain historical and cultural references, but also to make the viewer reflect on their own relationship with nature and sustainability.”

Leonard will give the 2016 Jan Fisher Memorial Lecture at 6:30 p.m. Friday, April 15 at the ASU Art Museum Ceramics Research Center and Brickyard Gallery, with the opening reception of “Breach: Log 16” to follow. The exhibition preview for museum members and ASU alumni will begin at 5:30 p.m.

This exhibition is supported by the Centering on the Future campaign.

Courtney Michele Leonard is an artist and filmmaker from the Shinnecock Nation of Long Island, New York. Leonard’s work explores the evolution of language, image and culture through mixed media pieces of video, audio and tangible objects. She studied art and museum studies at the Institute of American Indian Arts (AFA 2000), Alfred University (BFA 2002) and the Rhode Island School of Design (MFA 2008). Her current work embodies the multiple definitions of “breach,” an exploration and documentation of historical ties to water, whale and material sustainability.