The ability to understand and implement these new technologies in the classroom is no longer a desired qualification — it’s a requirement in today’s rapidly evolving digital world. A new graduate certificate in Computer-Assisted Language Learning will be available to students this fall, focusing on how to apply technology in foreign language teaching. Download Full Image

Fifteen total credit hours will be required, made up of three core courses, one elective course and the Capstone culminating experience. Elective topics range from corpus linguistics to computer-mediated communication to instructional design. During their Capstone, students will apply their knowledge in a culminating project such as a research study, creating CALL-based learning materials or developing a specific tool. At the completion of the certificate, students will have a comprehensive e-portfolio of their work to add to their resúme.

The certificate will focus on aspects of second-language acquisition, understanding the field of CALL research, and how to implement technology for language learning in an integrative way.

The certificate will be available beginning in fall 2016. For more information, view the plan of study or contact Andrew Ross and Bryan Smith.

Entrepreneurs from five Arizona State University student-led startups traveled to the promised land of startups, Silicon Valley, from March 31 to April 2. There they met with top-level professionals, toured startup companies and had the opportunity to pitch to successful entrepreneurs.The trip marked the end of the eSeed Challenge’s inaugural year, an entrepreneurial competition open to all ASU ...

Entrepreneurs from five Arizona State University student-led startups traveled to the promised land of startups, Silicon Valley, from March 31 to April 2. There they met with top-level professionals, toured startup companies and had the opportunity to pitch to successful entrepreneurs.

The trip marked the end of the eSeed Challenge’s inaugural year, an entrepreneurial competition open to all ASU students. Run by the Startup Center within the Ira A. Fulton Schools of Engineering, the eSeed Challenge develops promising early stage student ventures, preparing them to secure funding and win competitions to support their startups. The five teams represented on the innovation retreat were all incubated within the eSeed Challenge, emerging as the top startups out of more than 25 competitors. 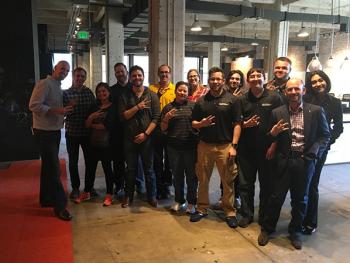 The selected ventures were:

These top ventures and their representatives were dubbed the Prescott Fellows, in honor of Tom Prescott, former President and CEO of Align Technology Inc., and the eSeed Challenge’s lead benefactor. At the outset of the retreat, each venture had the opportunity to make an “investor style” pitch to Prescott to compete for entry into the upcoming Arizona Collegiate Venture Competition (ACVC) on April 8.

Tech Dispatcher claimed the prize and will compete against other ventures from ASU, as well as Northern Arizona University, Grand Canyon University and University of Arizona for $60,000 in cash prizes, scholarships and mentoring.

“We feel like we can take the win at ACVC, but there are some strong teams so we will definitely be preparing coming up to the event,” said Garrett.

Reflecting on the first year of eSeed, Startup Center director Brent Sebold said the strength of the teams on the retreat was a testament to the success of the program.

“The confidence we have in the ventures we brought on this trip alone speaks to how well this first year has gone,” said Sebold. “Another measure of success is the tight bond that developed between many of the startups and their assigned venture mentors. They’ve worked hard and really grown over the past year.”

Garrett also highlights the involvement of mentors as a reason for Tech Dispatcher’s success.

“eSeed definitely prepared us for this level of competition,” said Garrett. “Joan Morgen was our mentor through the program and really pushed us to the next level while providing constructive criticism and helping us define our message.”

The trip itself provided more opportunities for growth by immersing the entrepreneurs in startup culture.

“The experience really guided how we present our startup,” said ZingFo Co-founder Butterfly Cherry. “We had to say our 30-second pitch everywhere we visited. It was pretty cool to see how every venture’s pitch was refined in just one day.”

Garrett added: “It was really eye-opening. I’d almost compare it to a study abroad program. The culture isn’t as different as another country, but business-wise it’s a completely different landscape.”

In addition, the entrepreneurs rubbed shoulders with Silicon Valley movers and shakers such as Tim Draper, founder of Draper University, as well as leaders from the Fogarty Institute for Innovation and YCombinator. YCombinator, an organization aimed at rapidly developing early-stage startups, has funded more than 1,000 startups since 2005, including DropBox, Twitch, Reddit and Airbnb.

“It was really motivating,” says Cherry of meeting with a YCombinator Partner. “My biggest takeaway was to get our product out there as soon as possible, even if it is crap at the moment. This is important to quickly find out what is and isn't working.”

eSeed will kick off its next round in the fall 2016 semester. Looking to the future, Sebold hopes the program will attract more participation and looks forward to operating out of the Startup Center’s new facility, Generator Labs.

“I encourage all ASU students who have an idea to apply,” said Sebold. “The startup process is 1 percent conceptual and 99 percent hard work, but we’re ready to mentor and motivate those ready to put in that work.”