She was once a student greatly invested in Arizona State University life and now, years later, she is back to help military veterans get the most of their college experience.

Kelley Stewart, class of 2008 and holder of a bachelor’s degree in applied psychology, is the newest military advocate at the Pat Tillman Veterans Center. 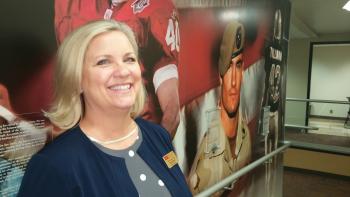 As a student, Stewart earned many accolades while serving in the Associated Students of ASU Presidents Council and as a member of various committees that were instrumental in shaping the campus into what it is today.

“Kelley comes with a terrific background in student engagement, having been an exemplary ‘engaged’ student here at ASU,” said Steve Borden, director of ASU’s Pat Tillman Veterans Center. “Her background in student government will assist our staff in helping students engage in ASU culture and also help them better understand how being engaged in the university will have a direct outcome in their success now and beyond.”

Stewart is the only student in ASU history to be elected student body president four times — twice as an undergrad and twice as a grad student. She also served as a student worker entrepreneurial ambassador and a management intern with ASU’s Career Services.

“I was very busy,” said Stewart, ASU’s 2008 Martin Luther King Jr. Student Servant-Leadership Award recipient. “Getting involved as a student and becoming a student leader embedded me in the ASU experience.”

Stewart began her pursuit of higher education at Mesa Community College (MCC) before transferring to ASU in 2004. At MCC she learned something very important — finding opportunities. Through the years she has connected to “many positive experiences” as a result.

“One of the skills I learned there that I brought to ASU is to look for open doors,” she said. “I think our students that just hit campus and leave or sort of stay closed off are missing 75 percent of what ASU can do for them.”

Regardless of a student’s pursuit of opportunities on campus, education is the key, said Stewart, who is one class away from completing her master’s degree. Education betters people by opening their minds and motivating them to be civically engaged.

“The diversity that you learn in a university this size and how to negotiate and get along with individuals from all different walks of life is huge,” said Stewart. “We learn at ASU how to observe our world, voice our concern, but then also jump in.”

The daughter of a U.S. Navy veteran, Stewart looks forward to contributing to ASU’s reputation as one of the top veteran schools in the nation — a reputation that has led to the gradual increase in military-affiliated students and their family members, which now stands at nearly 5,600.

Stewart has firsthand experience understanding veteran needs. As an instructor at MCC’s Fire Science Emergency Medical Technician Program, she has seen an influx of veterans go through the program and has been pivotal in assisting some achieve their educational goals in her additional role as an academic tutor.

“When you take a nine-credit-hour course and squeeze it into one semester, it’s difficult for students who may not have been in college recently,” said Stewart. “They need extra academic support.”

ASU’s military advocates can point students to the right place to access academic or other support. They are a unique part of ASU and aren’t usually found in other universities, said Borden.

“Our advocates work specifically in student veteran engagement — helping navigate the university, assisting them in getting involved, ensuring our veterans know what is available to them and how to take advantage of it,” he said. “They are part mentors, part life coach, part success coach and an always available sounding board to help discuss difficulties and how to navigate through them.”

Navigating the university and through sources of information is often not as simple as it may seem. That’s where the military advocate steps in, said Stewart. Their role is to lead the way for those needing assistance.

“Students who are unfamiliar with college or who’ve only been (attending school) online don’t necessarily know the questions they need to ask,” said Stewart. “So for me it’s more about a passion for connecting students with the resources they’re eligible for but are not aware of.”

Stewart also has a son serving in the Navy. She hopes to recruit him to join the Sun Devil family either now while he is in active duty or after his service concludes.  Stewart highlights the fact that ASU supports the educational goals of military members around the globe.

Although Stewart’s office is on the Polytechnic campus, she will travel to any campus to assist student veterans. If there’s a need, she’ll be there to help others succeed in the name of her alma mater — something she’s very proud of.

Mexico’s emerging energy reforms and the rise of natural gas signal a paradigm shift where new opportunities will arise in North America, said the former head of strategic planning for then-Mexican President Vicente Fox during a talk in Tempe on April 1.Dr. Hector Moreira, who is also adjunct faculty in Arizona State University’s School of Sustainability, told faculty, students and staff gathe...

Mexico’s emerging energy reforms and the rise of natural gas signal a paradigm shift where new opportunities will arise in North America, said the former head of strategic planning for then-Mexican President Vicente Fox during a talk in Tempe on April 1.

Dr. Hector Moreira, who is also adjunct faculty in Arizona State University’s School of Sustainability, told faculty, students and staff gathered for a talk in Wrigley Hall that change is coming as countries transition from coal and oil as primary energy sources to electricity produced from natural gas. 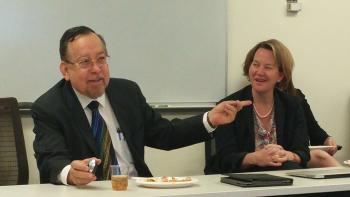 Dr. Hector Moreira, former head of strategic planning for then-Mexican President Vicente Fox and now adjunct faculty member as ASU's School of Sustainability, discusses Mexico's energy reform during a talk at Wrigley Hall on April 1. Seated next to Moreira is Kris Mayes, professor at the School for the Future of Innovation in Society. Photo by Jerry Gonzalez/ASU Download Full Image

“We’re entering a new era, which is the era of natural gas,” said Moreira. “You are going to become dominant if you have natural gas reserves.”

The U.S. is the largest producer of natural gas; the U.S., Mexico and Canada together account for 27 percent of the world’s production, comparable to the Middle East, said Moreira. This is good news at a time when two major changes are looming — a “revolution” in the car industry and the privatization of Mexico’s energy sector.

“North America has one of the world’s largest automotive industries, and also it’s an area that is funding all the energy required to the new-generation cars,” said Moreira.

Those new-generation cars are electric, he said. They aren’t the norm yet, but that change is coming and it will be quick. The first cars were mass produced in the U.S. in the early 1900s, and within a decade the process was standardized and millions of cars were on the road, he said.

“We have to be ready for that,” said Moreira. “Remember, when the change comes, it comes very fast … not everybody has an electric car now. They will very soon.”

One of the most significant changes in Mexico’s history is the privatization of the energy sector as part of reforms currently being implemented. It will be free-market conditions with the state leading and regulating the national energy sector while maintaining ownership of the resources beneath the subsoil. Once the resources come out of the subsoil, they no longer belong to the state.

The change was inevitable as Pemex — the state-owned oil monopoly and backbone of the nation’s energy production — has become unaffordable at a time when Mexico is unable to sustain its population’s annual 5 percent energy demand increases. Just as significant is the fact that within 10 years Mexico must close all its coal and fuel oil plants due to environmental agreements.

“So now we have to build a whole new amount of power generation based on natural gas or renewables, and at least 25 percent has to be renewable,” said Moreira. “There’s no experience in Mexico on how to combine either.”

Mexico’s energy reforms not only open the door for private investors but also for U.S. knowledge, Moreira said. Arizona’s expertise in power generation and distribution can be instrumental to the Mexican effort.

“Arizona is probably the state that has been able to combine better conventional and nonconventional (power) generation,” he said. “And now the idea in Mexico is that they have to do that.”

Transforming from a state-owned energy industry to private businesses and corporations is not without challenges. Countless technical details must be worked out, such as stabilizing power lines from various contributors and regulating processes. Social aspects also have to be considered when new infrastructure goes up.

“So one of the issues when deregulation of this magnitude occurs, it’s that it’s a great business opportunity and it’s a moment when inequalities are sharpened,” said Marisa Duarte, professor at ASU’s School of Social Transformation. “Because everybody wants to invest in those communities that are going to produce the greatest return on investment most quickly.”

Government oversight is important to ensure land rights and permissions are agreed upon, said Duarte. Otherwise, for example in the U.S., it can take 10 to 20 years for groups to organize and be able to take their grievances to the federal government so regulations or incentives can be established.

Mexican law requires businesses or investors to first get a government permit to build infrastructure and then they must negotiate with the landowner, said Moreira. Landowners typically are entitled to three types of payments from a business. If an agreement is not reached, the case goes to court.

As Mexico shifts to a privatized energy sector, there will be many opportunities and hurdles. Institutions of higher learning on both sides of the border will be vital as all these changes— shift to natural-gas power, the rise of electric cars, Mexico reforms — lead to more North American energy integration.

“We have to change the way we see each other and the way we see the future,” said Moreira. “That takes a lot of discussion and has a lot of aspects, and that’s why universities are the place to have these discussions, because (otherwise) we tend to see only our little part of the world.”