This week 15 years ago, NASA launched a spacecraft with the name 2001 Mars Odyssey, and onboard was the Thermal Emission Imaging System (THEMIS), a multi-wavelength camera designed at Arizona State University.

Odyssey arrived at Mars in October 2001 and spent three months using carefully controlled dips into the upper atmosphere of Mars to adjust the size and shape of its orbit in preparation for systematic mapping of the Red Planet.

Shortly after sunrise local time, light blue clouds fill Coprates Chasma on Mars, part of Valles Marineris, the vast "Grand Canyon of Mars." The clouds are mostly ice crystals and appear blue in color because they scatter blue light more strongly than other colors. In Coprates, the valley floor lies about 33,000 feet (10,000 meters) deeper than the flat canyon rim. This image was made Nov. 25, 2015, by the Thermal Emission Imaging System (THEMIS) using its visual-light and near-infrared filters, and it is approximately true in color. A shift in local time for the spacecraft's orbit is letting THEMIS focus on transient atmospheric phenomena in addition to geological studies. Photo by NASA/JPL-Caltech/Arizona State University Download Full Image

Both spacecraft and camera have been outstandingly successful. Not only has Odyssey been operating longer than any other spacecraft ever sent to Mars, but during Odyssey's lifespan so far, all six subsequent NASA missions sent to Mars have also succeeded.

For its part, THEMIS has taken nearly half a million images of Mars in five visual and nine infrared (heat-sensitive) "colors." Researchers have mosaicked these into the best image-maps of Mars ever made both in daytime and nighttime infrared, as well as the most complete map of Martian surface properties. The data from THEMIS has also played a large role in introducing students to the excitement of scientific research.

"In 15 years of imaging Mars, we've made major discoveries as we followed the Red Planet through all its seasons for more than six Mars years," said ASU professor Philip Christensen, the instrument's designer and principal investigator. He is Regents' Professor of Geological Sciences and the Ed and Helen Korrick Professor in ASU's School of Earth and Space Exploration.

"In that time we've learned what Mars is made of, and how many of its processes work," he said. THEMIS images helped NASA select landing sites for the twin Mars Exploration Rovers Spirit and Opportunity, the Mars Science Laboratory rover Curiosity and the non-roving Mars Phoenix lander. Its maps of rocks and dust are helping engineers find a safe and scientifically productive landing place for 2018's non-roving InSight lander and the Mars 2020 rover.

Images and data from THEMIS positively identified long-suspected water ice in the south polar ice cap, and they also led to the discovery of powerful dust-laden jets of CO2 gas that erupt at the south polar cap every spring.

THEMIS and Odyssey have also played an important role back on Earth, Christensen explains.

"Over the course of the mission so far," he said, "we have trained dozens of graduate students who have taken their PhDs out into the world, where they are teaching others and making discoveries of their own. We have educated thousands of ASU undergraduates in the basics of a planet that's both like and unlike Earth. And literally tens of thousands of secondary school students around the country have been introduced to the excitement of scientific research using THEMIS images."

The mission's longevity is no accident, said Odyssey project scientist Jeffrey Plaut of NASA's Jet Propulsion Laboratory in Pasadena, California. "In addition to the quality of this spacecraft, the careful way it is operated has been crucial to how it has stayed so productive so long." He noted, "Odyssey was designed for a four-year mission. We're in the 15th year, and it keeps doing everything we ask it to do."

"THEMIS will continue its scientific work as long as Mars Odyssey continues," said Christensen. "THEMIS and Odyssey predate the creation of ASU's School of Earth and Space Exploration. But they and other Mars-dedicated spacecraft have provided a wonderful data heritage for scientists, researchers and students, now and into the future."

Drawing a crowd at PIR

Editor’s note: This is the latest installation in a yearlong series about ASU's Formula SAE team. Find links to previous stories at the end of this article.Well, they didn't have a completed car to do a pace lap, but the student engineers building a Formula-style car for competition in Nebraska did make it to Phoenix International Raceway this weekend.Motorsports fans were drawn to the club's te... Drawing a crowd at PIR

ASU student engineers don't have a full car, but they do have a full tent as motorsports fans check out their progress

Editor’s note: This is the latest installation in a yearlong series about ASU's Formula SAEFormula SAE is a student design competition organized by the International Society of Automotive Engineers (now known as SAE International). team. Find links to previous stories at the end of this article.

Well, they didn't have a completed car to do a pace lap, but the student engineers building a Formula-style car for competition in Nebraska did make it to Phoenix International Raceway this weekend.

Motorsports fans were drawn to the club's tents at PIR, where their in-progress car was displayed, along with a race simulator that drew participants young and old.

After the moment of respite, it's back to the workshop for these students, who have a race car to finish and test before the national competition in June. Holden Walker, 12, of Phoenix, dons a helmet to race the Mazda Raceway Leguna Seca course inside ASU's Formula SAE tent at Phoenix International Raceway on April 2. Around 20 members of the Formula SAE team came to show off their chassis in an effort to generate excitement, and perhaps funds, for the project. They brought a Project Cars video game and connected it to an old chassis. 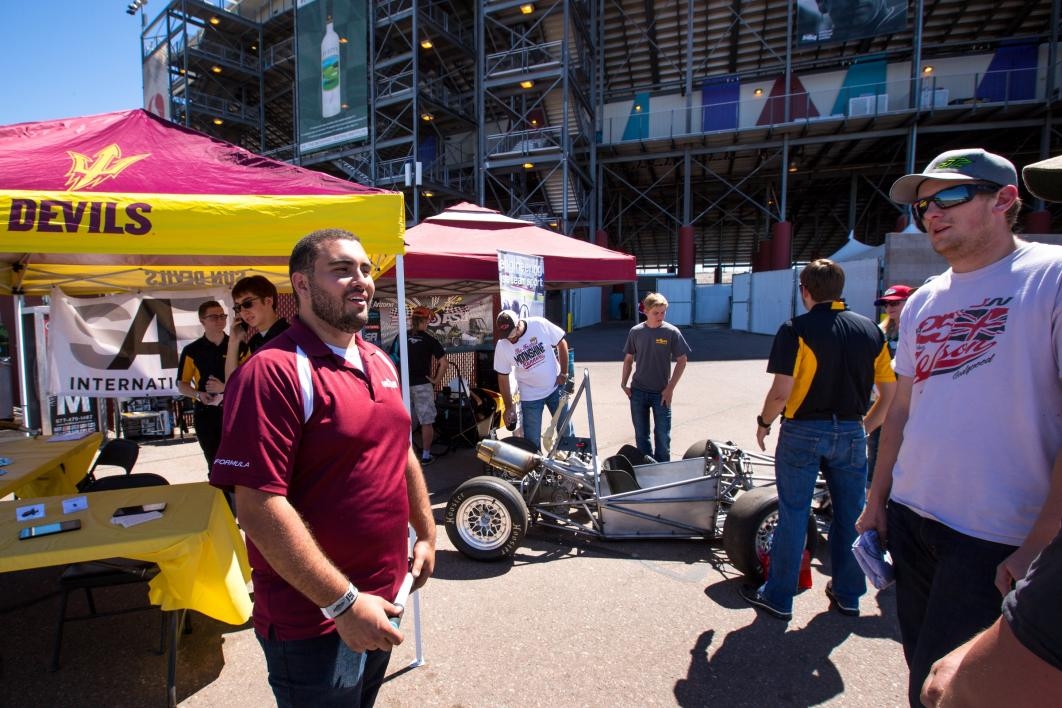 ASU junior Abraham Sharaf (left) talks with people about the Formula SAE car at Phoenix International Raceway on April 2 before the start of the Desert Diamond West Valley Phoenix Grand Prix, a Verizon IndyCar Series race. Many of the ASU team members worked on the car overnight, getting the suspension, engine, floor and side panels attached. 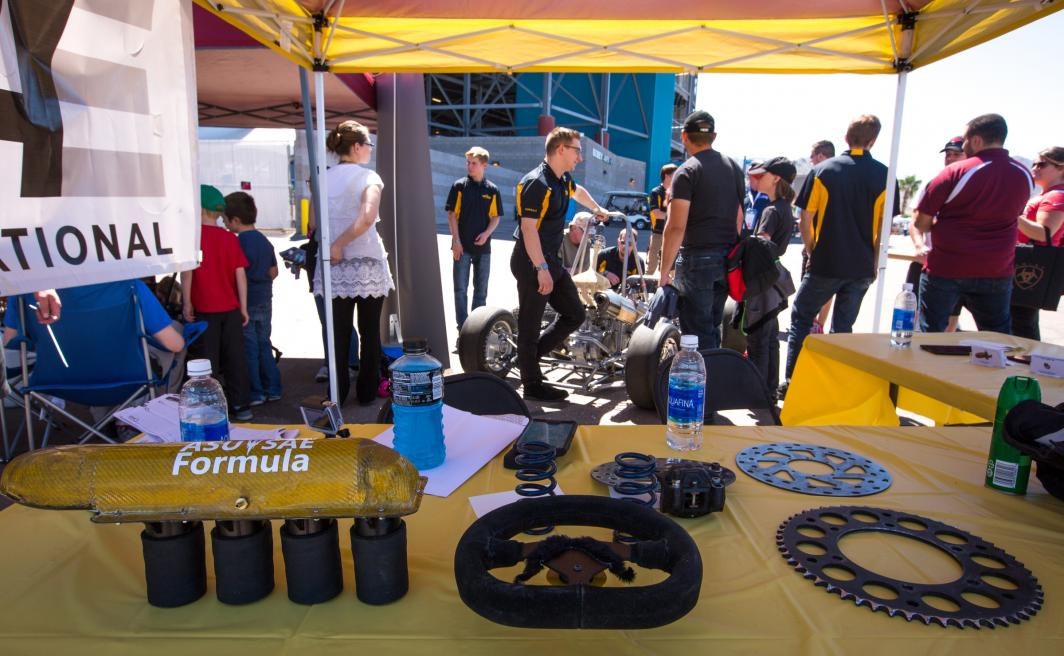 Interested passers-by stopped to learn about the nuts and bolts, as it were, of ASU's Formula SAE car at Phoenix International Raceway. 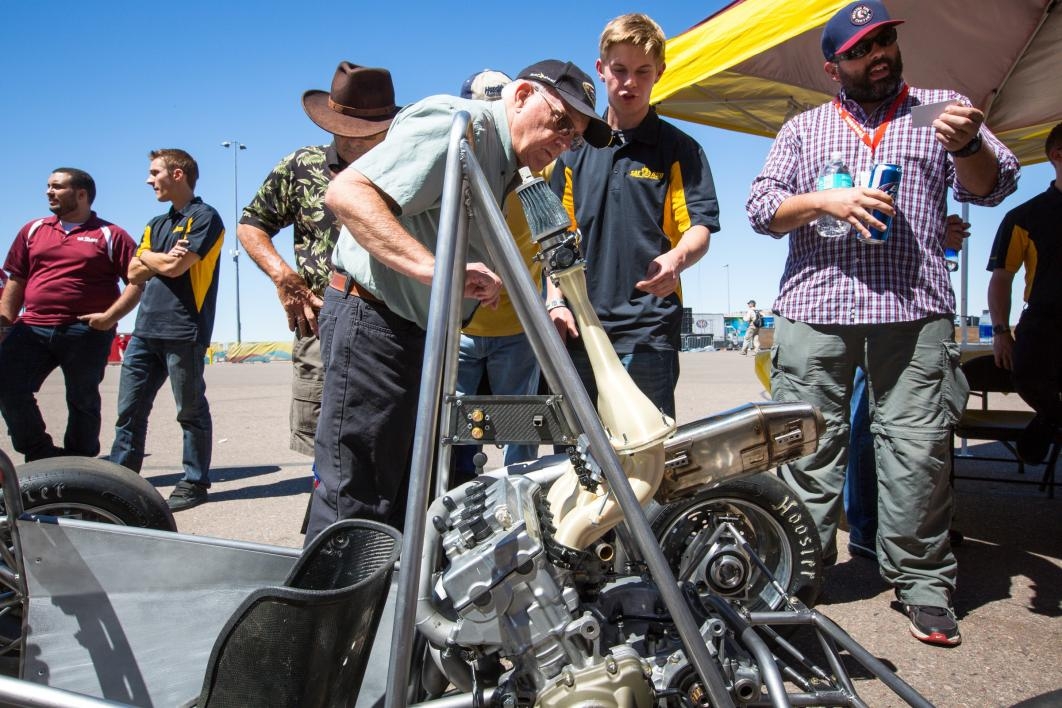 Around 20,000 people attended the April 2 race, with many stopping to learn about the ASU team's car. 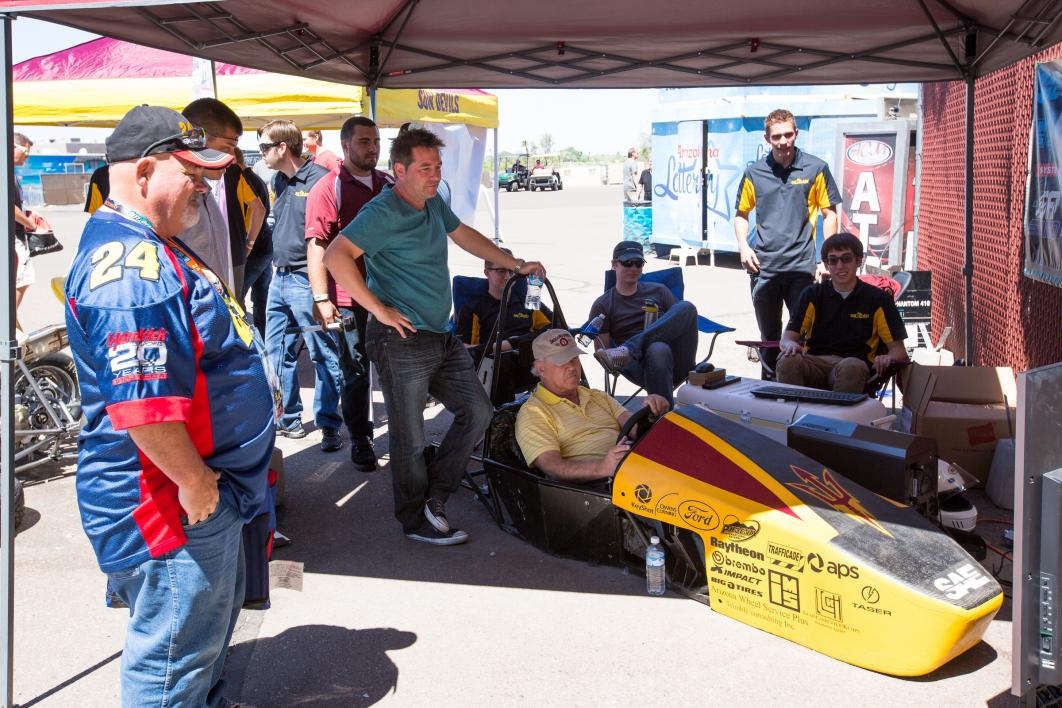 Race fans of all ages were able to drive the Formula SAE team's simulator car. The Project Cars video game it was connected to features popular racetracks and various race cars. 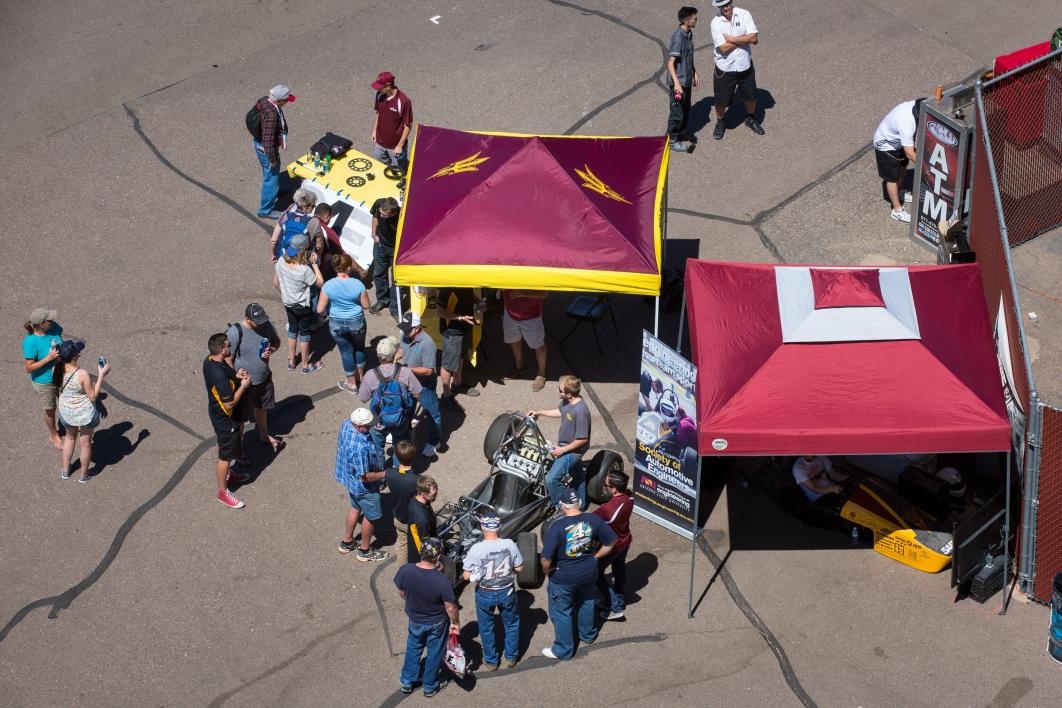 A steady stream of interested people stopped to get up close and learn about ASU's Formula SAE car. The team is prepping for a national competition in Nebraska in June. 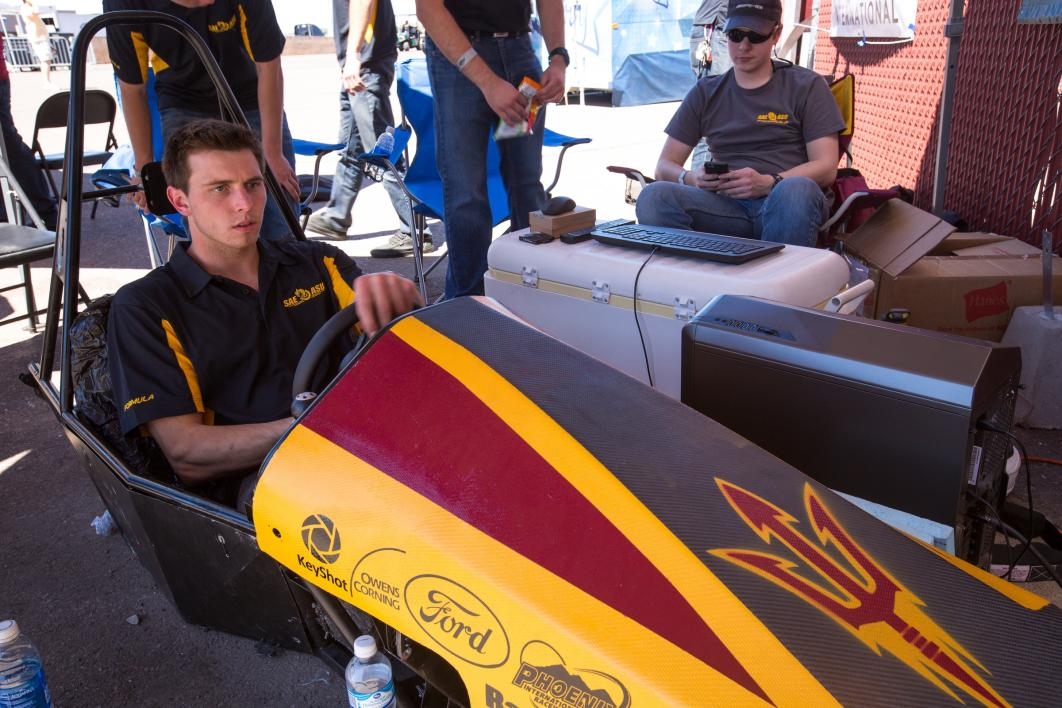 During a lull between visitors, chief engineer Wes Kudela — an ASU senior in mechanical engineering — takes the wheel of the car simulator. 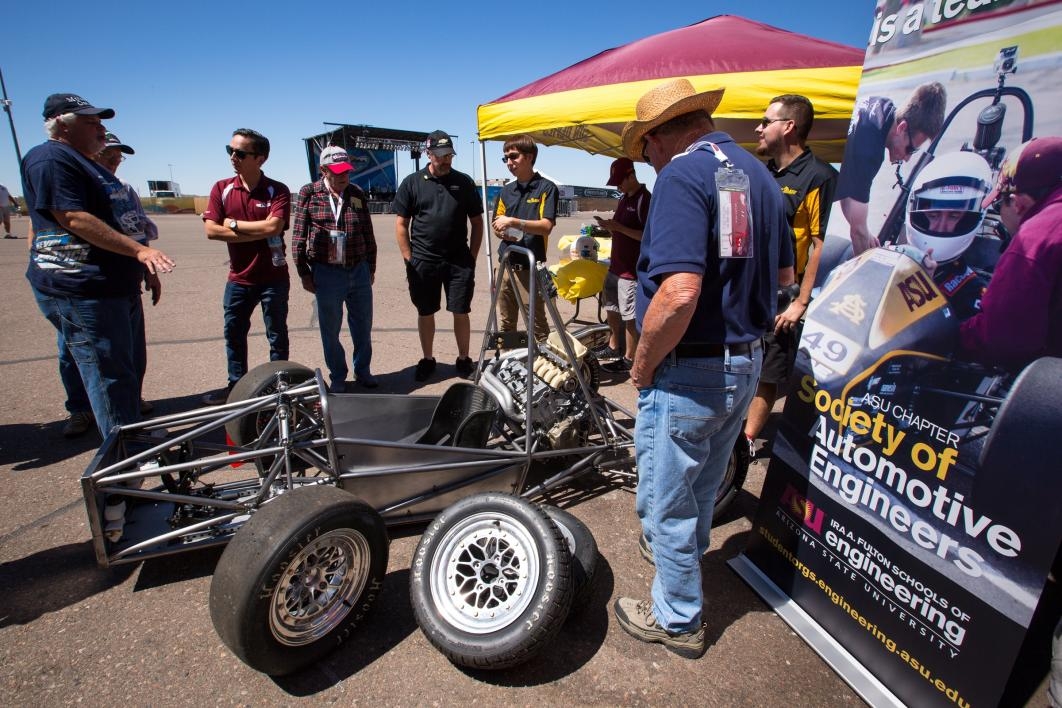 Visitors check out the Formula SAE team's creation, which is starting to look decidedly more like a car.

Dec. 17: No brake: ASU team powers through to edge closer to race car

Feb. 1: Coming into the home stretch

March 29: One step closer to PIR