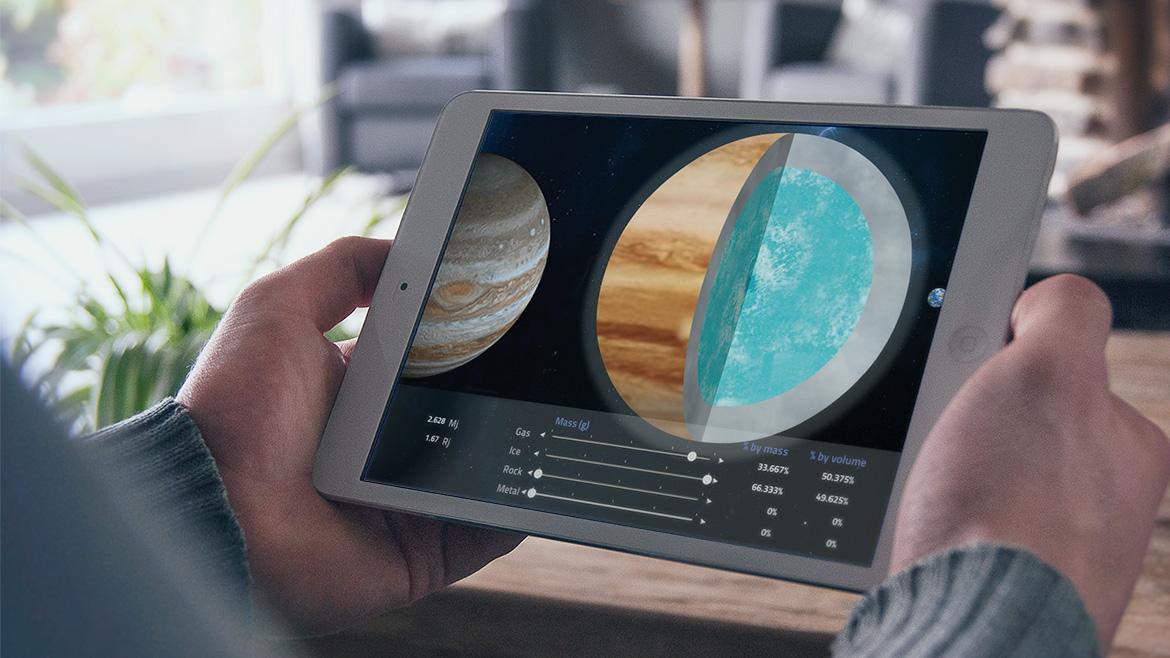 Opening the universe to everyone

Arizona State University’s School of Earth and Space Exploration is about to take the whole nation on a school tour.

The school’s top researchers will develop next-generation digital learning experiences that incorporate NASA science content. The result of the five-year project will be “bite-size educational experiences” available for free on the Internet, according to Elkins-Tanton.

“There’s a huge need to reach out at scale,” she said. “And when you talk about scale, you’re talking about the Internet.”

NASA has a ton of content on the Web. ASU will work with designers to create interactive content on a platform that makes NASA data accessible and interactive.

“We were trying to take all those ideas and bring them to the next level of effectiveness,” said Elkins-Tanton, principal investigator on the project.

“The aim is to help learners become problem-solvers capable of exploring the unknown, rather than just mastering what is already known,” said Ariel Anbar, project deputy principal investigator. “It is learning science as process and as a universe of questions rather than as a dusty collection of facts.”

Students will go to a portal, select from a library of experiences and be launched into a cool NASA data-infused experience, Anbar said. It’ll be different from traditional NASA outreach, which typically buries the user in facts. In this effort, students will be taught to solve problems they haven’t seen before.

“You will be learning that material but through the context of this cool NASA exploratory data,” Anbar said. “Part of it is increasingly we’re trying to teach science not as facts, but as a process. ... Our theme is changing from mastery of what we know to the ability to explore the unknown.”

“The aim is to help learners become problem-solvers capable of exploring the unknown, rather than just mastering what is already known. It is learning science as process and as a universe of questions rather than as a dusty collection of facts.”
— ASU professor Ariel Anbar, project deputy principal investigator

SESE officials said they hope to get to a scale of millions of users.

“The learning experiences we’re going to be building will be interactive and adaptive,” Anbar said. “It will be, ‘Go look at this, and do it in a virtual space, and receive feedback.’”

To this end, SESE has put together a crack team, led by principal investigator Elkins-Tanton, deputy principal investigator Anbar, and co-investigators Steven Semken, Sheri Klug-Boonstra and Dror Ben-Naim. Other co-investigators include SESE’s Erik Asphaug, Jim Bell, Phil Christensen, Scott Parazynski, Meenakshi Wadhwa, Sara Imari Walker, David Williams and Patrick Young. With faculty like these on board, it will be like having Jacques Cousteau build your aquarium.

Together with adaptive learning provider Smart Sparrow, this team will develop personalized and adaptive learning experiences centered on astrobiology and “small bodies” such as Saturn’s moon Enceladus, Jupiter’s moon Europa, and asteroids. These are specific areas of expertise among the NASA subject-matter experts on the ASU team.

“They will bring their expertise to our content,” Elkins-Tanton said.

The grant comes from NASA's Science Mission Directorate. Their vision is to share the story, the science and the adventure of NASA's scientific explorations through stimulating and informative activities and experiences created by experts, delivered effectively and efficiently to learners of many backgrounds.

“SESE is known for combining the creative strengths of science, engineering and education, setting the stage for a new era of exploration,” Elkins-Tanton said. “With this grant, we can promote a greater public understanding and appreciation for science, and inspire a new generation of explorers. We hope to share the exciting world of NASA science in a way that is both approachable and interactive.”

In the near term, the focus will be on independent self-learners of science. In the longer term, the team seeks to expand the program to formal K-12 education, in coordination with NASA’s new education strategies.

“This grant brings together education powerhouses — ASU and NASA, together with a trusted edtech partner — to promote STEM education through exploration," said Sethuraman “Panch” Panchanathan, chief research and innovation officer and executive vice president at the ASU Knowledge Enterprise Development. “This opportunity helps ASU engage and empower learners from all backgrounds and proficiencies to master concepts, ask open-ended questions regarding what’s next, and prepare to explore the unknown with the help of technology.”

Thirty-five years ago this month, Walter Cronkite signed off for the final time as anchor of the “CBS Evening News.” Today, Arizona State University announced that distinguished and award-winning journalist Scott Pelley, who now sits in Cronkite’s former anchor chair, will be the 2016 recipient of the Walter Cronkite Award for Excellence in Journalism.Pelley, anchor and managing editor of th...

Thirty-five years ago this month, Walter Cronkite signed off for the final time as anchor of the “CBS Evening News.” Today, Arizona State University announced that distinguished and award-winning journalist Scott Pelley, who now sits in Cronkite’s former anchor chair, will be the 2016 recipient of the Walter Cronkite Award for Excellence in Journalism.

Pelley, anchor and managing editor of the “CBS Evening News” and a correspondent for “60 Minutes,” will receive the 33rd Cronkite Award, given by ASU’s Walter Cronkite School of Journalism and Mass Communication at a ceremony Nov. 21 at the Sheraton Grand Phoenix hotel. He also will broadcast the “CBS Evening News” that day live from the Cronkite School on ASU’s downtown Phoenix campus. 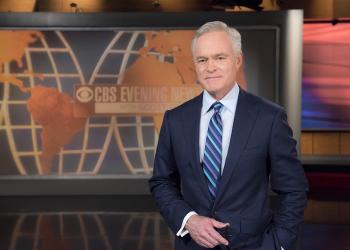 Scott Pelley, anchor and managing editor of the “CBS Evening News,” is the 2016 recipient of the Walter Cronkite Award for Excellence in Journalism. Download Full Image

“Walter became known as ‘Uncle Walter’ to an admiring audience, but he was truly like an uncle to me,” Pelley said. “In our conversations, he pressed me to be honest with the audience, skeptical of conventional wisdom, and grateful for my family. His advice and his example are more urgent today than at any time. I’m greatly humbled by this recognition from the Cronkite School because it comes in the name of a man I knew, admired and loved.”

Pelley, who assumed the anchor desk in 2011, has led the “CBS Evening News” to new heights by growing its audience and winning journalism’s most prestigious awards, including the George Foster Peabody Award, an Alfred I. duPont-Columbia Award, two George Polk Awards, five Emmys, five Edward R. Murrow Awards and a host of additional honors. He also serves as a full-time correspondent on “60 Minutes,” where he has recently reported from Iraq on the front lines in the battle against ISIS; covered the Paris terrorist attacks; interviewed CIA Director John Brennan; and uncovered critical lapses in the U.S. security clearance process that millions of people must pass to work with America’s secrets.

“CBS News, for many, is synonymous with Walter Cronkite. ASU and this award continue the best values of the Cronkite legacy,” said CBS News President David Rhodes. “We are so pleased that the journalism school recognizes the continuation of this important legacy through the impressive work Scott Pelley is doing for our audiences every day.”

“The CBS Evening News is built largely around the core values of excellence espoused by Walter Cronkite,” said Steve Capus, executive producer of the “CBS Evening News with Scott Pelley” and executive editor of CBS News. “Scott Pelley not only exemplifies what it means to be a member of this proud news organization, but is also an outstanding ambassador on behalf of our beloved profession. We’re all proud of Scott, and I’m sure Walter would be as well. He is most deserving of this great honor.”

“No one today better represents the legacy of Walter Cronkite – and his values of accuracy, objectivity and integrity – than Scott Pelley,” Callahan said. “We are honored to have him at ASU and look forward to having him meet with the students, faculty, alumni and friends of Walter’s school.”

Pelley has more than 40 years of journalism experience and has covered almost every major news story of the past quarter century. He has interviewed world leaders and top newsmakers, including Presidents Barack Obama and George W. Bush, Supreme Court Justice Sonia Sotomayor, Federal Reserve Chairman Ben Bernanke and Afghan President Hamid Karzai. He also conducted the only interview with one of the U.S. Navy SEALs who helped kill Osama bin Laden.

He joined CBS News in 1989 and reported on the Persian Gulf crisis, covering Iraqi missile attacks on Saudi Arabia. He later served as a Dallas correspondent and covered the Oklahoma City bombing and the trial of Timothy McVeigh. He also was among the first journalists to report from the World Trade Center site during the Sept. 11 attacks. In 2004, Pelley became a correspondent for “60 Minutes.” His work on that program has won 29 Emmys, five Murrow Awards, three Peabody Awards, two duPont Awards, a Polk Award and a host of other honors.

Prior to joining CBS News, Pelley was a producer/reporter for television stations in Texas. He started his journalism career as a copyboy at the Lubbock Avalanche-Journal newspaper. Pelley was born in San Antonio and attended Texas Tech University. He is a member of the university’s alumni hall of fame and serves on the board of Texas Tech’s College of Media & Communication.

The Walter Cronkite School of Journalism and Mass Communication, named in Cronkite’s honor in 1984, prepares the next generation of journalists in both the time-honored fundamentals embraced by Cronkite and the multimedia skills necessary to thrive as journalists in the digital age.

Housed in a $71 million state-of-the-art media complex in downtown Phoenix, the school has been featured in The New York Times, The Times of London and USA Today as a leader in 21st century journalism education and innovation.

The Cronkite School is the home of Arizona PBS, which serves as a journalistic teaching hospital for hundreds of students who work under 15 full-time faculty at Cronkite News. The news organization includes a nightly television news broadcast on Arizona PBS, digital reporting bureaus in Phoenix, Washington and Los Angeles, business and borderlands reporting bureaus, an entrepreneurial digital innovation lab, a digital production bureau, a newsgathering and civic journalism bureau and the Carnegie-Knight News21 initiative.