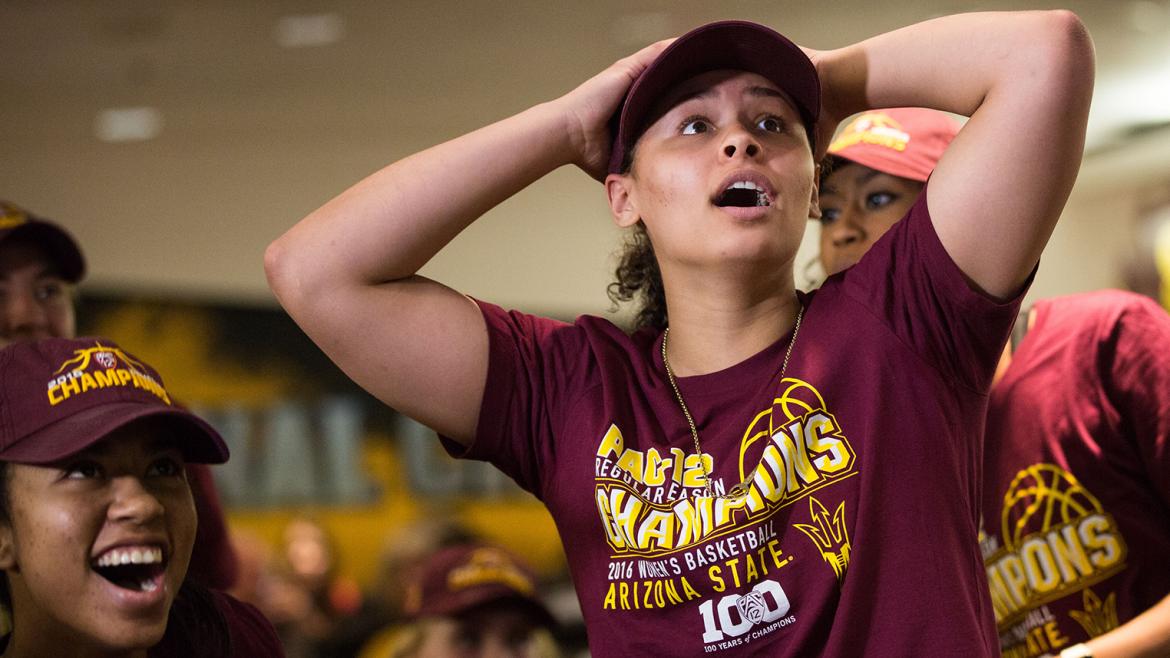 Year One: Life at ASU — Sabrina and the Devils' postseason

Freshman year: It's a time of promise and optimism ... much like the start of March Madness.

For Sabrina Haines, one of the five freshmen ASU Now is featuring in an occasional photo series, and her Sun Devil women's basketball teammates finished their regular season 26-7 and shared top honors in the Pac-12 standings with a record of 16-2. It led to their best-ever NCAA Tournament ranking, No. 2 seed.

Here's a look at the joy, the victory and the defeat of a tournament run. 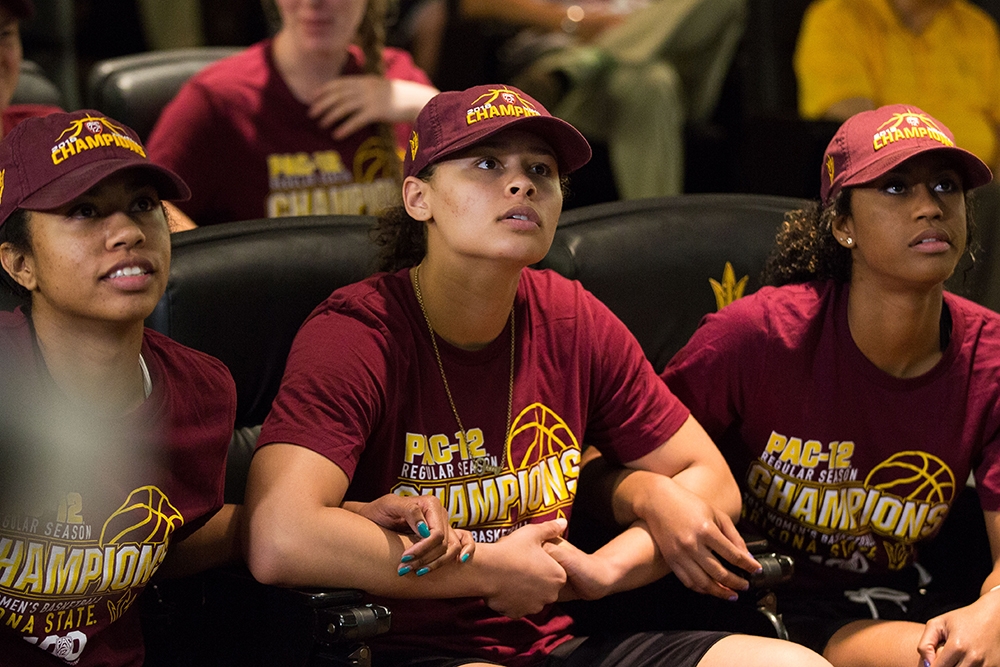 Sabrina Haines and her teammates wait in anticipation of the announcement of NCAA women's tournament standings at the Ed and Nadine Carson Student-Athlete Center on March 14. 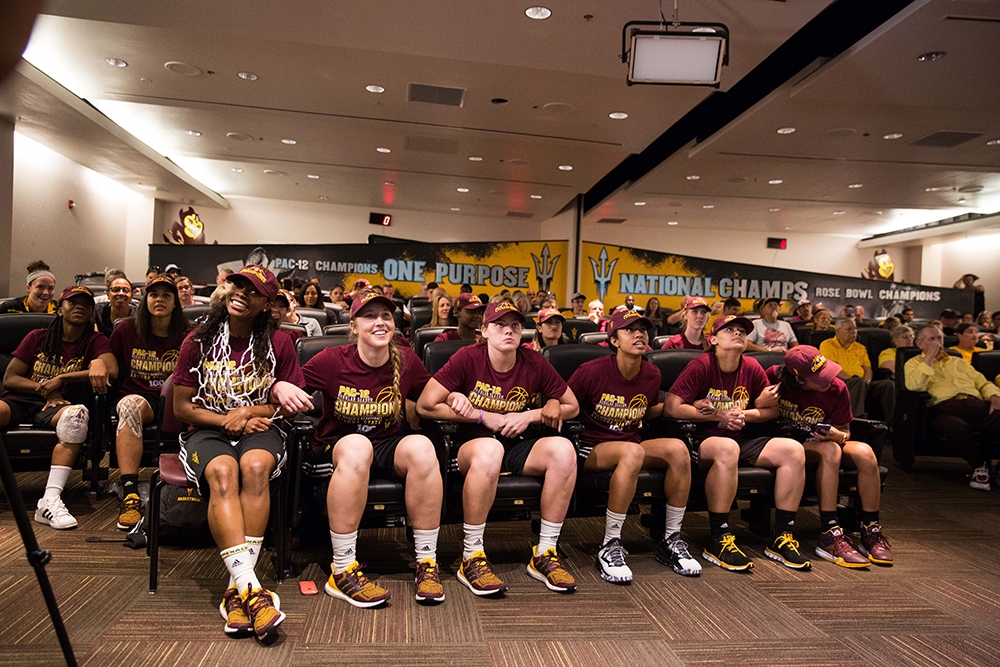 Members of the ASU women's basketball team sit nervously as the NCAA Tournament draw is revealed. 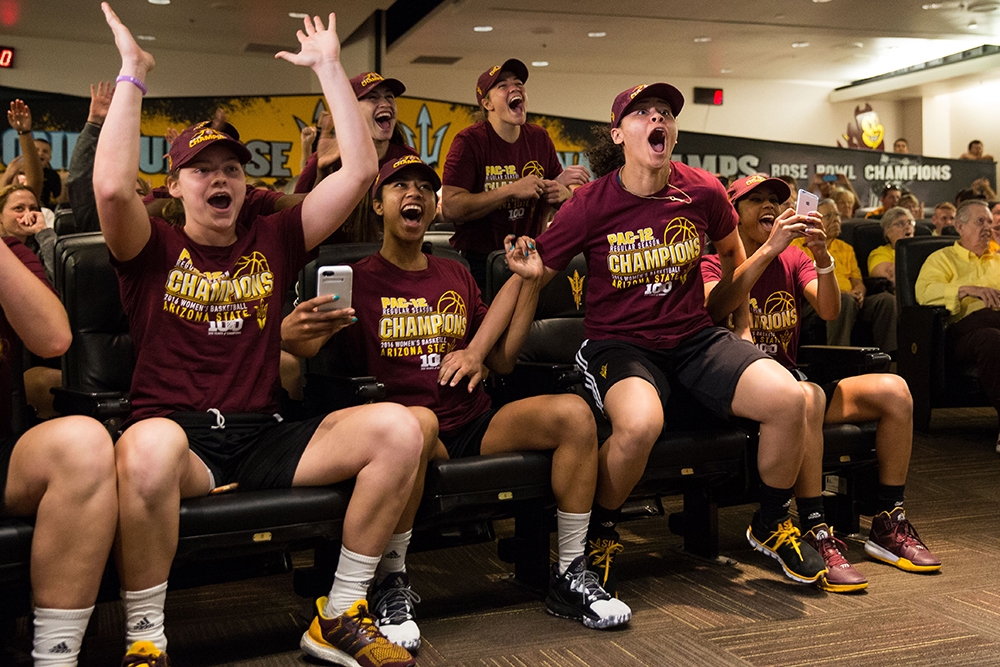 And the No. 2 seed in the Souix Falls division goes to Arizona State University's Sun Devils! 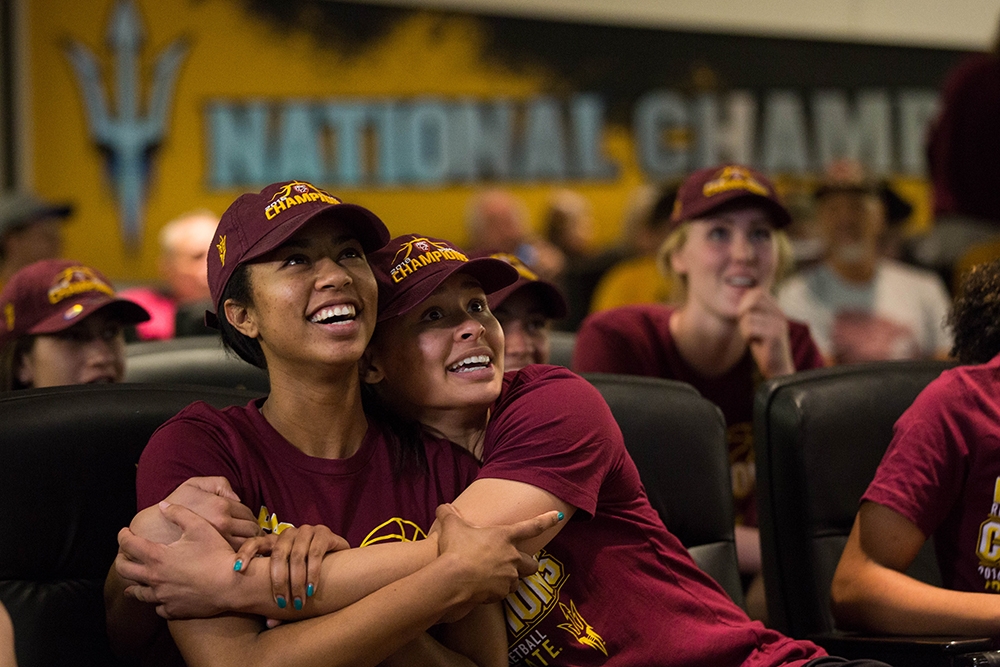 Haines hugs her teammate, senior guard Arnecia Hawkins, as they get word of their seeding in the tournament. 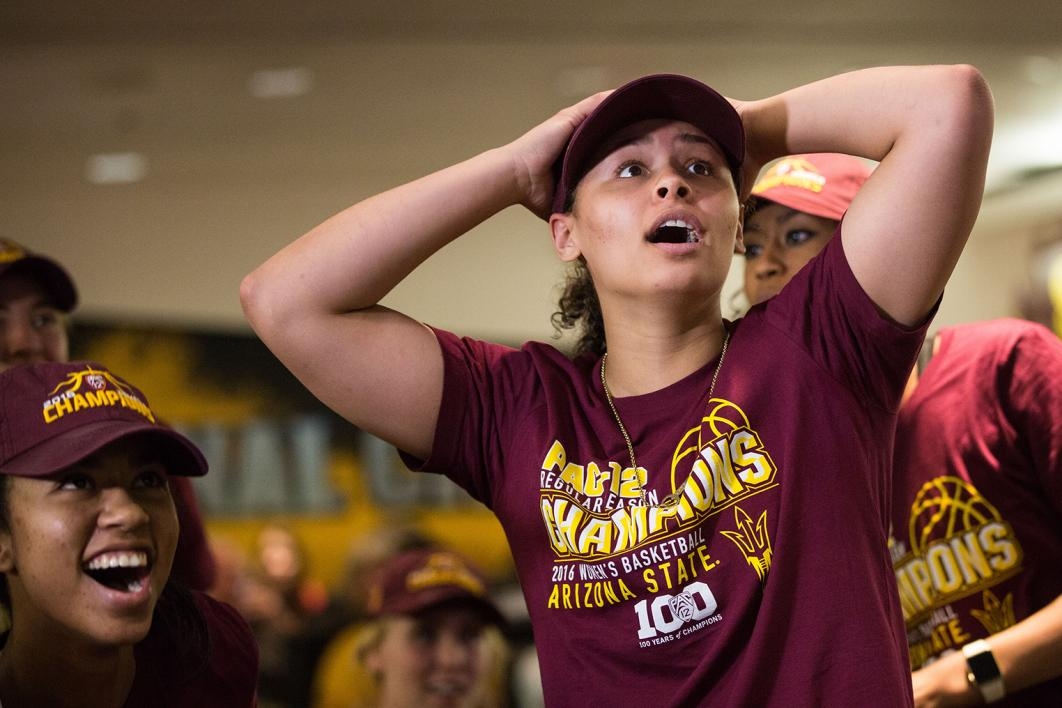 Haines looks astonished at her team's high ranking, the highest the Sun Devils women's team has ever been seeded. 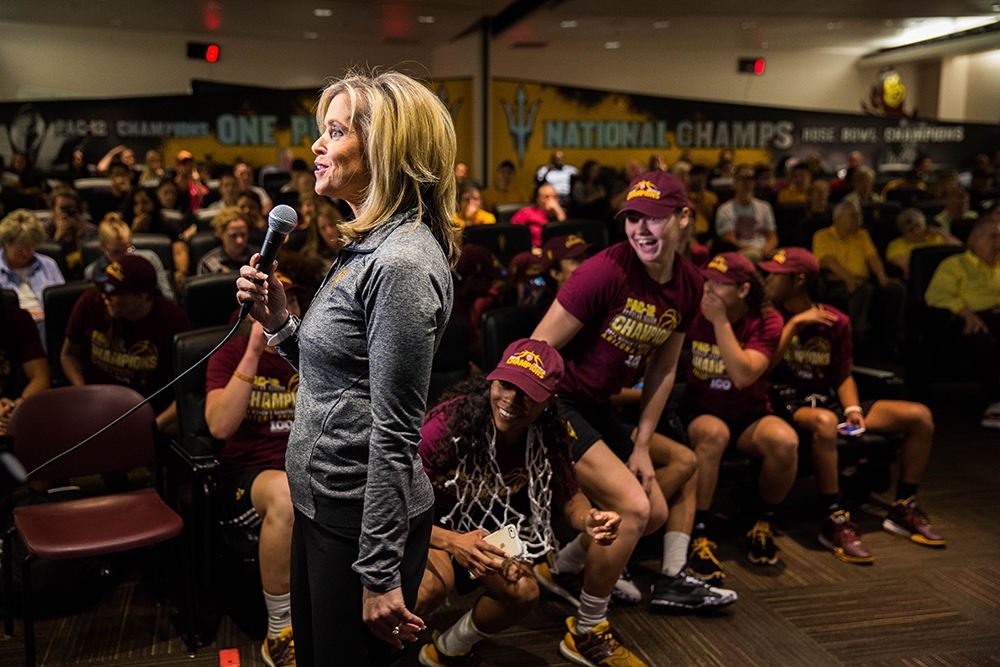 Head coach Charli Turner Thorne addresses the media as Haines and her teammates watch, following their placement in the 2016 NCAA tournament. 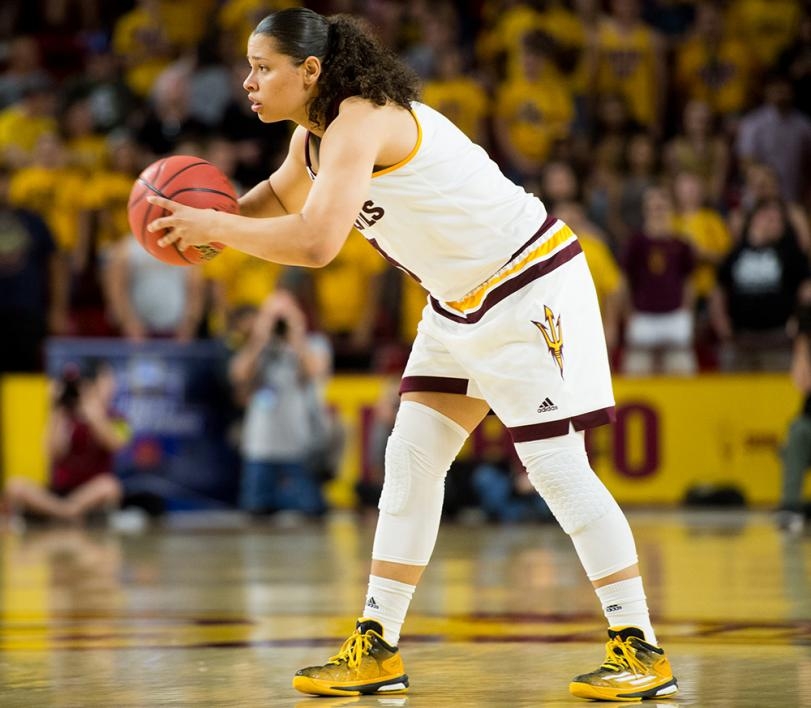 Though not a starter, Haines, a guard, looks to move the ball upcourt during the first-round game against New Mexico State at Wells Fargo Arena on March 18. 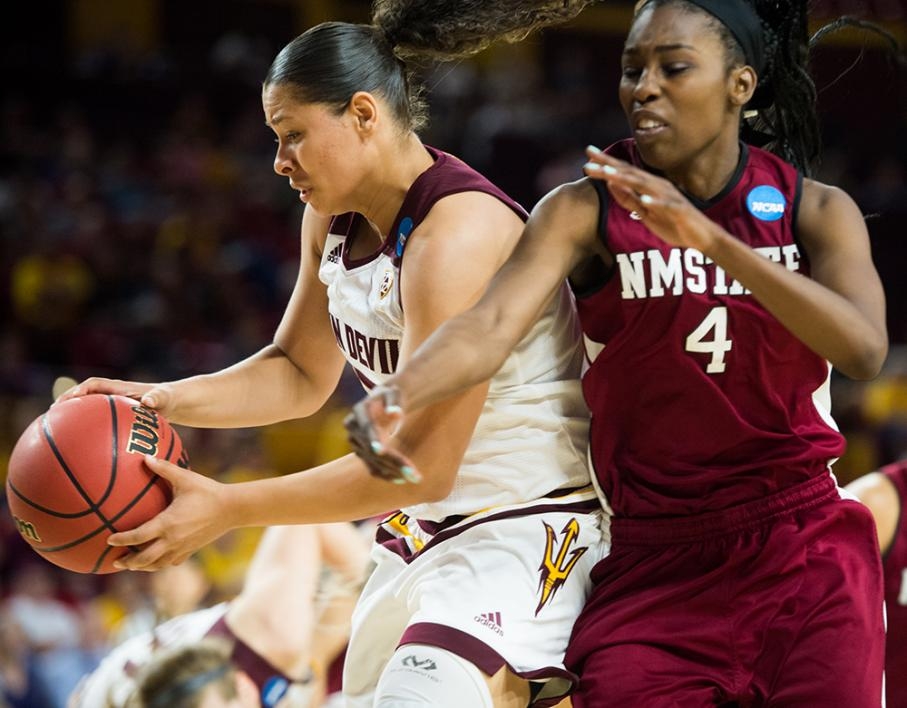 Haines fights for a rebound against New Mexico State senior guard Sasha Weber. During the regular season, Sabrina had 25 offensive and 47 defensive rebounds. 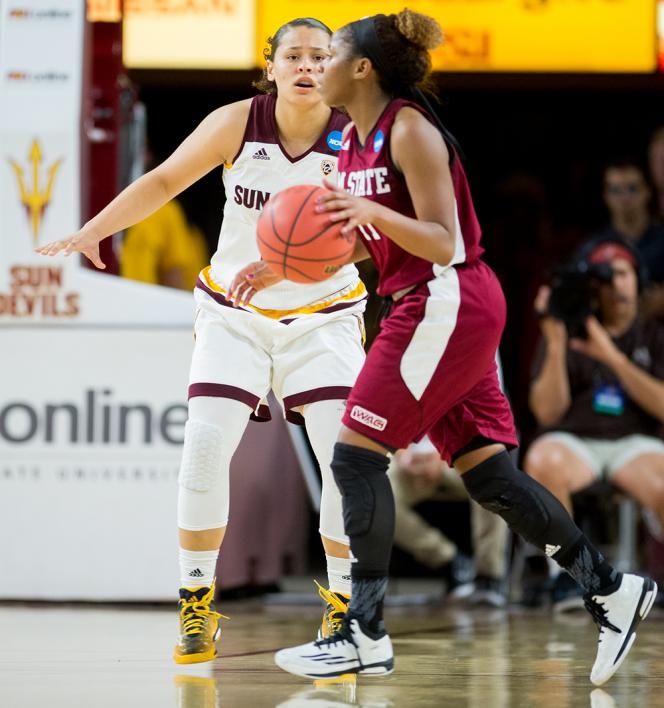 Haines plays defense against the New Mexico State Aggies. During the season, she had 23 steals and four blocked shots. Haines runs on the court to congratulate senior Katie Hempen on hitting another three-point shot. Hempen finished as the Sun Devils' leading scorer with 20 points, including 6-for-6 three-pointers. 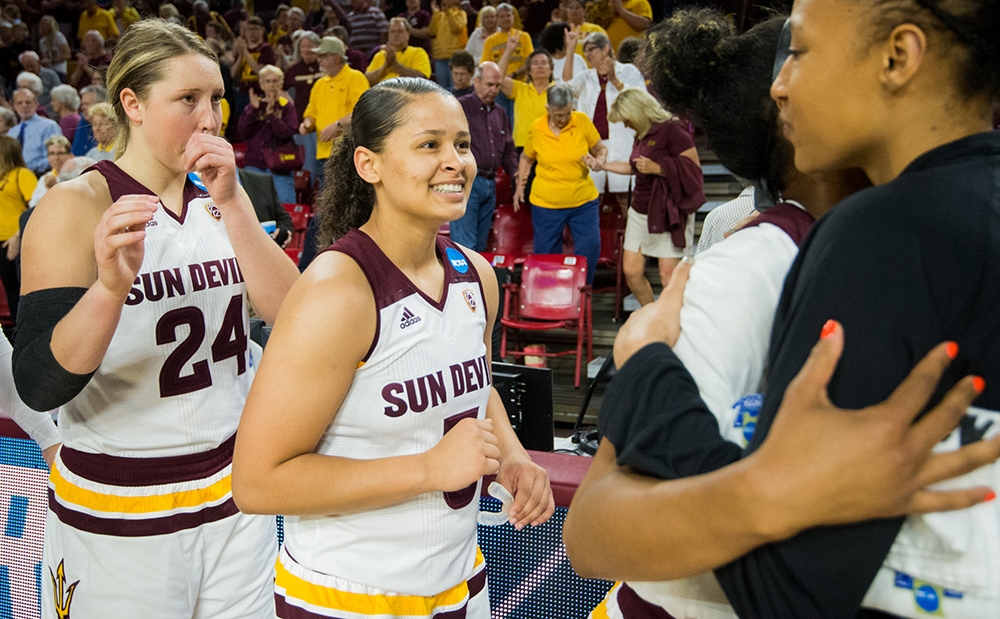 Haines and her teammates thank their New Mexico State opponents on a good game following the first-round 74-52 Sun Devils victory. 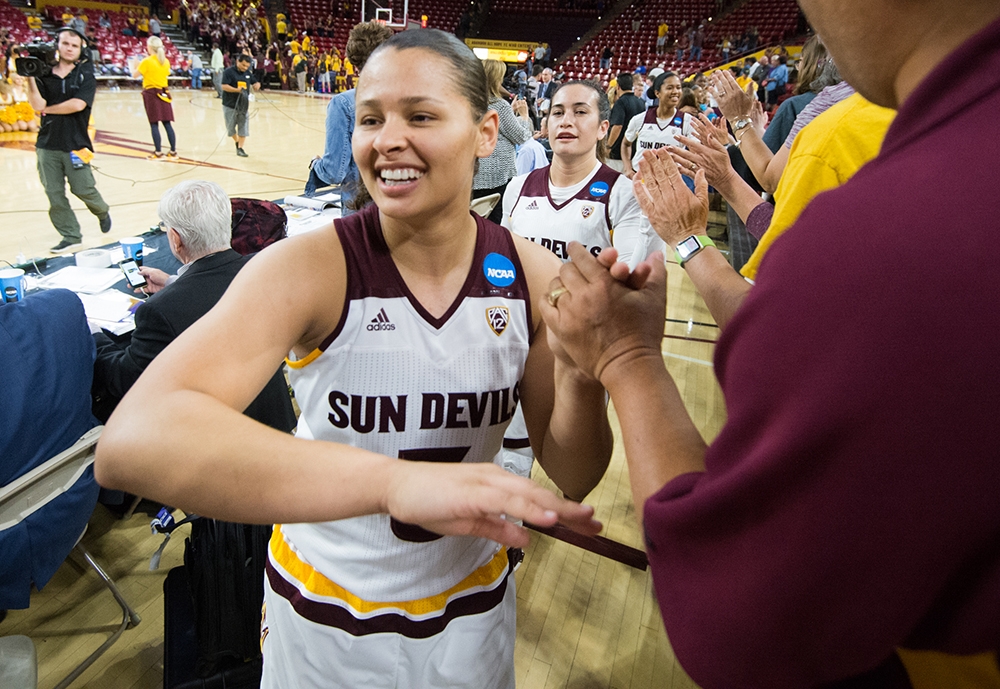 The Sun Devils leave their home court victors, but the joy is short-lived. Two days later, they faced University of Tennessee Lady Volunteers basketball team and were defeated 75-64, thus ending their excellent season.

As an undergraduate student at Arizona State University, Alberto Olivas remembers seeing then-Congressman Ed Pastor speak on campus. His presence at ASU grew after the university moved into what is now the University Center building in downtown Phoenix, where Pastor long maintained a congressional office. Thousands of students would pass by the office every day.Now, Olivas returns to ASU to take o...

As an undergraduate student at Arizona State University, Alberto Olivas remembers seeing then-Congressman Ed Pastor speak on campus. His presence at ASU grew after the university moved into what is now the University Center building in downtown Phoenix, where Pastor long maintained a congressional office. Thousands of students would pass by the office every day.

Now, Olivas returns to ASU to take on the role of founding executive director of the newly formed Congressman Ed Pastor Center for Politics and Public Service in the College of Public Service and Community Solutions. 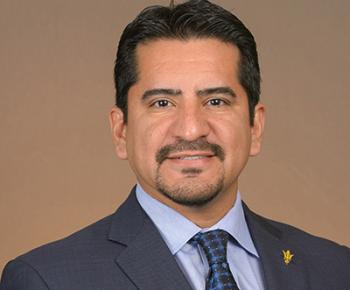 The center was launched in fall 2015 to honor the legacy and contributions of Congressman Ed Pastor and to encourage political engagement among ASU students and the broader community. Pastor dedicated his surplus campaign funds to the center with a vision that mirrors his more than four decades of public service — and with the aim of inspiring hands-on participation that can help them solve public-policy challenges.

“I want students to experience the political process firsthand,” said Pastor. “That way, they’ll gain an understanding of how policies affect them and how they can be a part of the solution.”

Pastor, who was elected to Congress in 1991 and retired last year, was known as someone who could get things done and always willing to meet with constituents and community groups.

“His legacy is such a moving story of a life dedicated to public service; someone that I have looked up to for decades,” said Olivas. “I couldn’t think of a better example of what humble public service and sincerity in that service looks like.”

Olivas was drawn to the position by the opportunity to work directly with students over a sustained period of time. He wants to create a program that reflects the congressman’s commitment to Arizona and giving students a voice in the political process.

“I am really interested in working with students to develop novel ways to get people that aren’t 'into politics' to think about how they are personally affected by election outcomes, including ballot initiatives and elections for local and state officials,” Olivas said. “The center’s model is based on having students lead efforts to get their peers and their communities more engaged in politics, elections, and community change processes; they are the ones that will determine what works best for their generation.”

The Pastor Center will have a particular focus on communities that are the least represented in politics — a natural fit for the diverse population at ASU, and in particular the College of Public Service and Community Solutions, home to the center. The college has the largest percentage of minorities and first-generation students at Arizona State University.

“Alberto’s background is ideally suited to working with college students who want to become more engaged in the political process,” said Jonathan Koppell, dean of the College of Public Service and Community Solutions. “He has a tremendous grasp of the electoral process and the important role of voter outreach. Plus, he’s worked for elected leaders from both major political parties.”

Olivas sees that the Pastor Center is not just for students interested in careers in public service.

“If I’m a nursing student, I need to know about health policy in Arizona and how we compare to other states and other countries,” said Olivas. “Similarly, if I am going in to civil engineering, I need to know about decision making in determining what roads get built, how roads get built, who decides what neighborhoods look like. Arts and humanities students have a lot to offer in terms of strategies to dramatize public issues and get people emotionally engaged and committed to take action. Every field has political ramifications.”

A native Arizonan, Olivas earned his undergraduate degrees in anthropology and Latin American studies from ASU, where he attended as a Flinn Scholar. He earned his M.Ed. from Northern Arizona University.

“Civic engagement work is central to what higher education institutions were created to do,” said Olivas. “From the founding of this country, the initial mission of colleges and universities was not to help students get good jobs, it was to prepare students for citizenship, to be responsible, engaged and informed citizens who had the skills to govern their own communities. We need to reclaim that mission. That’s part of what I hope we accomplish in the Pastor Center.”

As part of his new role, Olivas is charged with fundraising and increasing the national exposure of the program. The fact that Pastor was well liked in political circles will help.

Olivas is exploring opportunities to collaborate with ASU faculty to identify specific opportunities for students to become more engaged in the political process and public service. He plans to work with student organizations to provide hands-on learning opportunities that are beneficial to both students and the community. That includes teaching students how to create public dialogue through student-hosted community events and workshops. Olivas also wants to bring the community into ASU to better learn about the issues and challenges citizens face. The goal is for students to help facilitate solutions.

“Our job is to prepare our students to be engaged in the world and to be skillful, effective members of their communities in terms of the democratic processes and community problem solving,” said Olivas.

Read this story in Spanish.