ASU dean helps others connect to their past

Polytechnic campus
ASU dean: Connecting to our ancestors can help us better understand ourselves.
ASU dean hosts two to five genealogy workshops a month for community.
Tracing one's family tree has changed much over the years.
March 21, 2016

Duane Roen likes to brag about his big family — by last count it teetered around 32,000, and change.

He can’t possibly commit all of their names to memory, but he has all of them recorded in a database, and some of them are mentioned in more than 16,000 journal entries and seen in stacks of family albums filled with photos, documents and letters, the result of a hobby that started as a teen.

Most people at the university know Roen as the vice provostRoen is also the dean of College of Letters and Sciences, dean of University College and a professor of English. of Arizona State University's Polytechnic campus and overall good guy. But many might not know he’s an expert family historian who hosts two to five evening and weekend workshops a month on the subject of geneaology. 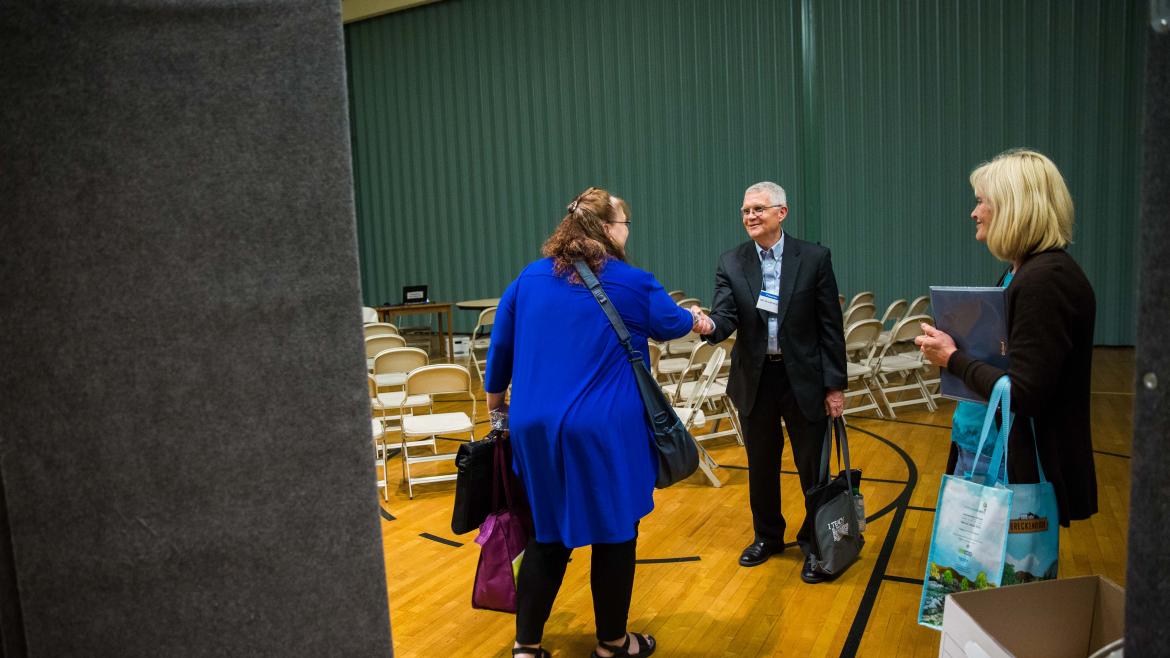 Despite the 80 to 100 hours a week Roen puts in at ASU, he said getting others interested in family history is a hobby and passion that has transformed into community service. That commitment shows up in many ways, including Roen’s founding of ASU’s Project for Writing and Recording Family History.

“It’s natural for us to yearn for more personal connections to those who came before us, in stories about their lives and first-person accounts of their daily struggles, hopes and dreams,” Roen said.

“Who we are as individuals depends on all sorts of factors, including who our ancestors were. We have their DNA in us, and we also have their traditions. It’s important for people to know where they came from.”

Roen has been hooked on family history since the age of 15, when he discovered a Norwegian family bible in his grandparents’ attic. In a way, that love of family connection explains why he loves such foods as lefse, rommegrot and krumkake. Or why he has a grain bag with the initials “M.R.” pinned to his wall that he touches every time he walks up and down the stairs in his Tempe home.

“M.R. was my grandfather, and he was a farmer from Wisconsin,” said Roen, who is from River Falls, Wisconsin. “The bag was his and he used it to thresh wheat and oats. Every time I touch it, I feel a connection to him.”

He and his wife, Maureen, who also works at ASU, have been recording their family history since 1978 by writing daily journal entries on their children and other family members, which he keeps neatly stacked on his living room bookshelf. Roen said it has become a part of his daily practice and takes only about 15 minutes per entry.

Roen and his wife are no longer on the fringe element when it comes to collecting information on their ancestors. New tools, technologies and the explosion of Internet sites have opened the door for a new era of family history and discovery, introducing millions of enthusiasts to their pasts. And that’s good, said Roen, who remembers the days when hunting down a relative was time-consuming and had a gumshoe feel.

“Back then there was no Internet or World Wide Web, and finding your ancestors required going to a courthouse, a family-history center or ordering the rolls from Salt Lake City,” said Roen, who traces his Norwegian bloodline back to the late 1600s.

“It could take a couple of weeks to receive, and you’d then have to rent them for weeks at a time. Once you received the rolls, you’d sit at this microfilm machine and hand-crank it to move forwards or backwards. You’d have to go page by page because there was no index and you went by memory or instincts to find a name. It took hours of time and a lot of patience. Today it’s pretty easy, and I’ve made some great finds in the last few years.” 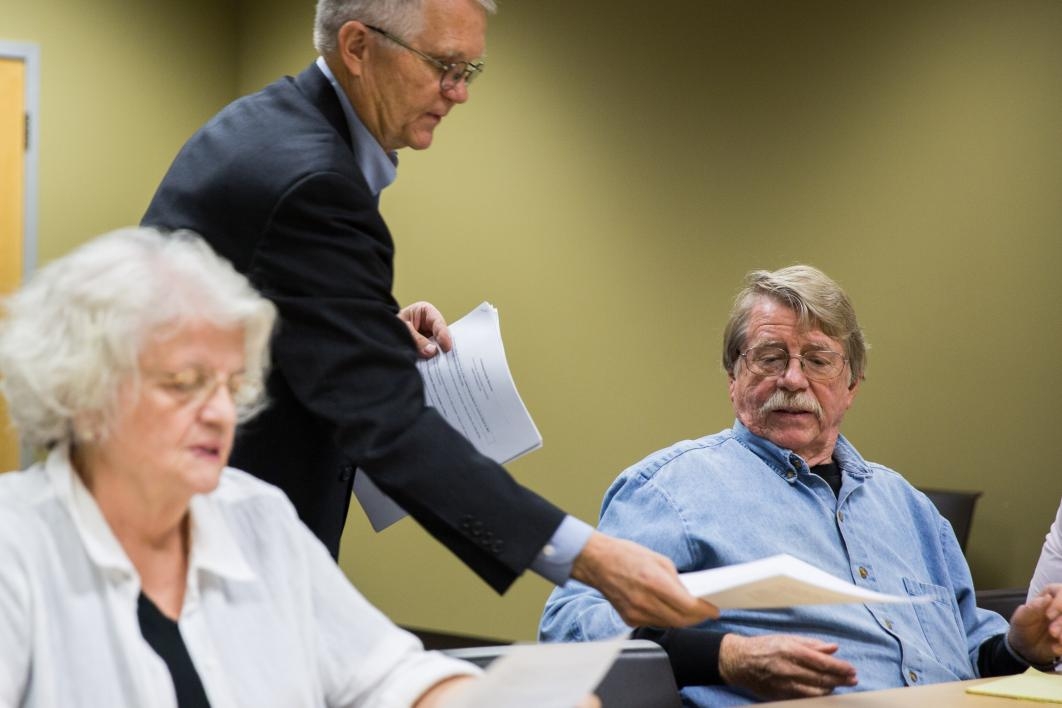 Duane Roen hands out papers detailing how to publish one's family history to Gary Anderson at the Tempe Public Library on the morning of March 12. The session was one of several that Roen has created for community members interested in family history. 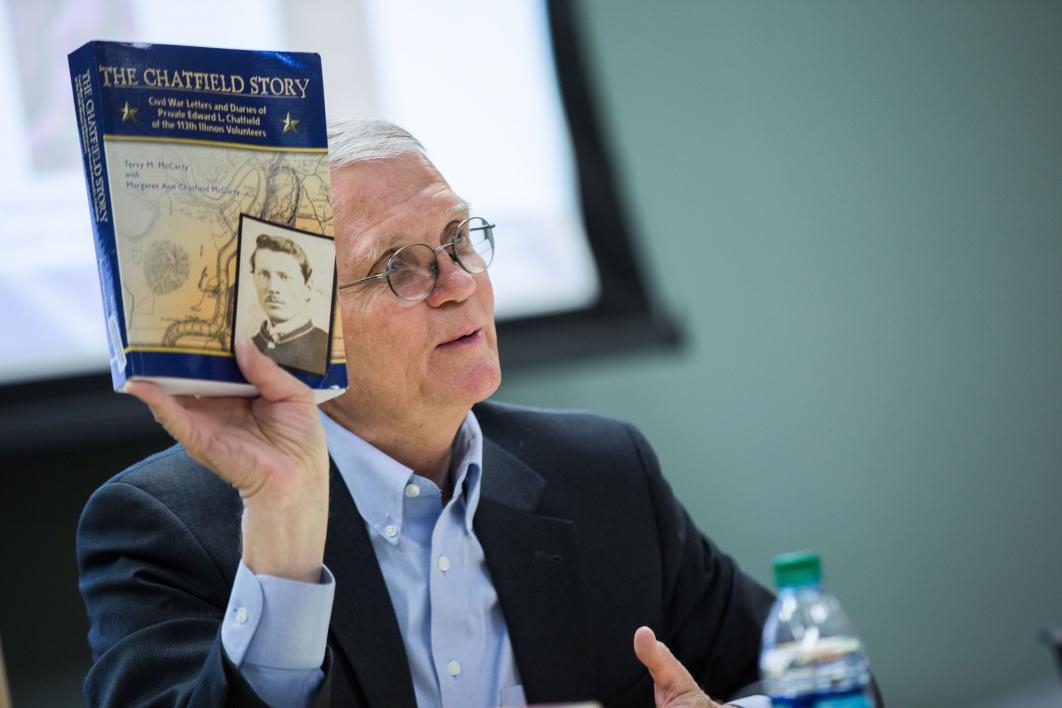 Duane Roen shows off a book of collected history and letters of the author's family history as an example of publishing a family history during the workshop at the Tempe Public Library. The afternoon of March 12, Cynthia Gerard reads out a short piece of writing based on her childhood memories of home during Duane Roen's most popular workshop, "Writing about Family Members, Places, and Events" at the Peoria North LDS Stake Center. Duane Roen thanks his particpants for taking the time to write and share their stories during the "Writing about Family Members, Places, and Events" workshop March 12 at the Peoria North LDS Stake Center. 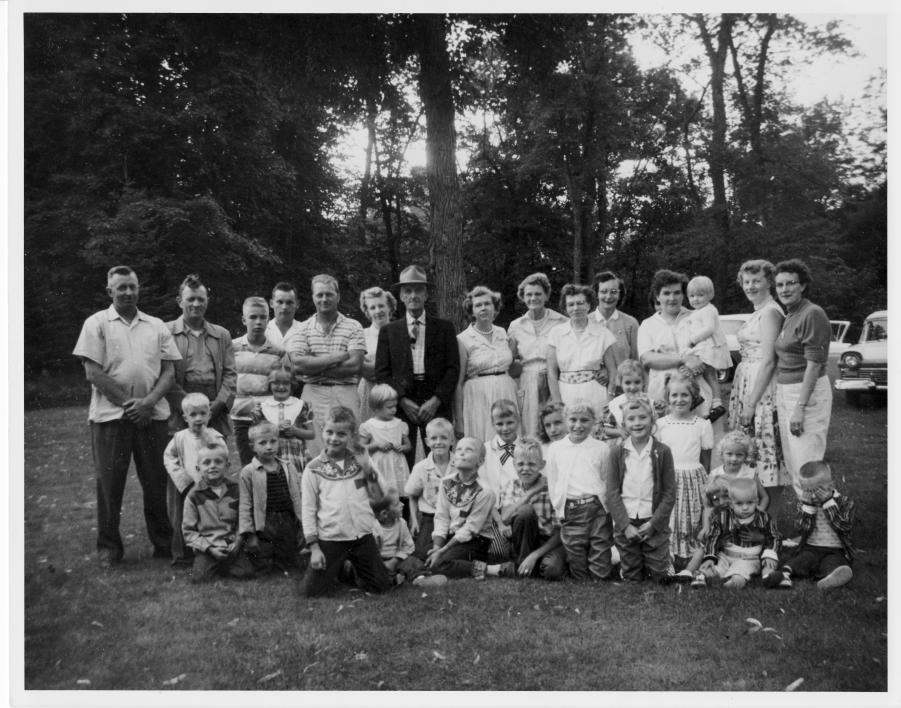 A 1958 Roen family reunion in Wisconsin. Duane Roen likes to brag about his big family — by last count around 32,000, thanks to his decades of family-history research. Duane Roen's maternal great-great-grandparents Nels and Georgina Bystrom are pictured around 1870. Roen has turned his passion for tracing his own history into a way to help others trace theirs. 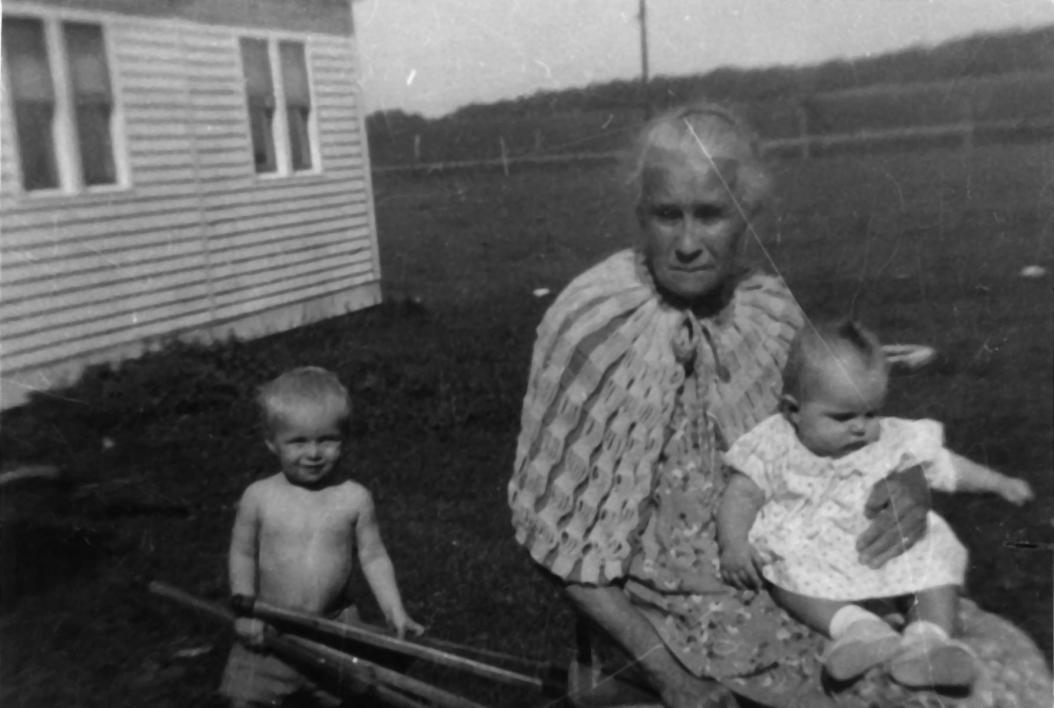 Duane Roen (left) in a family photo with his sister Linda and maternal great-grandmother Anna Bystrom in the late summer of 1950.

One of those finds was the discovery that Roen was a distant cousin of Nell Cropsey, who disappeared from her home the night of Nov. 20, 1901. Thirty-seven days later her body was found floating in the Pasquotank River near the Cropsey family home in Elizabeth City, North Carolina. A male suitor was convicted — and later pardoned — of her murder, and many questions about her death remain unanswered. It’s these types of historical nuggets that propel family-history gatherers.

Gary Anderson, who attended a March 12 workshop hosted by Roen at the Tempe Public Library, said he wants to take his family history in a different direction.

“We are farmers from western Pennsylvania, and I want to start a family newsletter called ‘The Manure Spreader,’ ” the 75-year-old Anderson said with a laugh. He’s a former ASU professor. “I don’t know if anyone outside of our family is interested or not, but that’s the sort of flavor I’m going after.”

Stephen Lawton, 73, who is also a retired ASU professor, said he inherited his father’s research, which consists of two bookcases and seven boxes of file folders. He said he found a Quaker ancestor and is thinking about starting a blog or self-publishing a book as a resource to link family members.

“One of the things I liked best about Duane’s presentation is that our stories are important and it’s up to us to tell them,” Lawton said. “It opens up American history, and it’s interesting to think that somehow you’re a part of it.”

Baseball is the all-American pastime, but it had a global flair when the Sun Devils took on a recent opponent.Players from Meiji University in Japan played an exhibition game at Arizona State University on March 15, and the experience was as much about learning as about scoring runs.Video shot by Deanna Dent, edited by Ken Fagan/ASU Now... 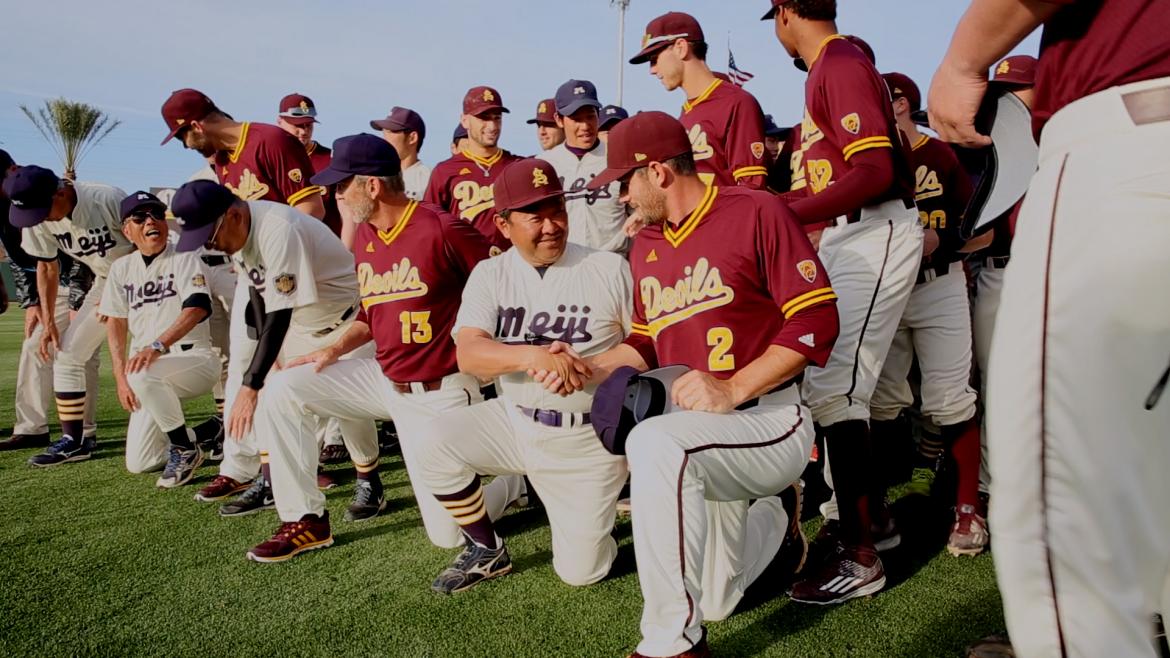 Baseball is the all-American pastime, but it had a global flair when the Sun Devils took on a recent opponent.

Players from Meiji University in Japan played an exhibition game at Arizona State University on March 15, and the experience was as much about learning as about scoring runs.