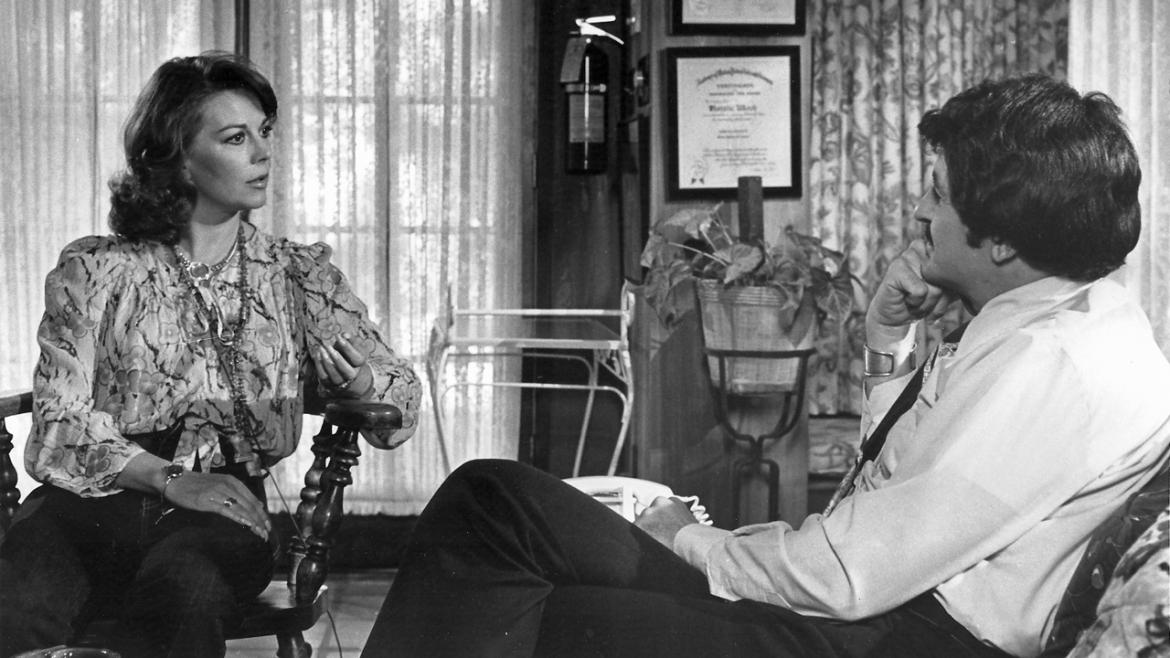 Who was Nick Salerno? Many would say: a generous soul who changed the Valley of the Sun and ASU for the better.

In the 1960s, he defused a confrontation between student protestors who had occupied Old Main at Arizona State University and the armed National Guard who surrounded them.

In the ’70s he launched Cinema Classics, which became a decadelong PBS institution in the Valley, foreshadowing the popular Turner Classic Movies (TCM) hosted by Robert Osborne.

And in the ’80s and ’90s, he introduced foreign and independent films to the Valley through a partnership with Dan Harkins of Harkins Theatres.

Salerno, retired emeritus professor at ASU, died on March 15. He taught at ASU for 33 years and in ways almost too numerous to recount, Salerno’s work intertwines with ASU history and the rise of Arizona arts, literature and, most particularly, film appreciation.

He published numerous scholarly and popular articles and, later, was celebrated as a local celebrity; however, his work with students is what Salerno always wished to be remembered for. Thousands of students in Arizona pursued British literature, film history and appreciation, the short story and composition with his mentorship.

“I was just an unread kid from a mining town,” said Karla Elling, one of his early students. “Nick rescued me as my adviser in English.”

Salerno also helped her obtain a fellowship for graduate study and urged her on when she was close to quitting: “I was writing the dissertation for my doctorate. I had a husband and two small children and just didn’t think I could do it,” she said. Salerno told her, “You’re almost to the finish line. Don’t quit now.” He met Elling at home at midnight after her marathon writing sessions at the ASU Library and gave her notes and ideas until she finished her dissertation and graduated.

Salerno was a first-generation American, born in Chicago to Sicilian immigrants. They moved to Arizona in 1948. At Phoenix Union High School he began his writing career and was published regularly in the Arizona Republic. Graduating as valedictorian, he was awarded fellowships to attend ASU (then called Arizona State College).

While an editor of the ASU student-run newspaper State Press, he later recalled being somewhat of a thorn in the side of the university administration. Kathryn Gammage, wife of then ASU President Grady Gammage, insisted her husband “wished there were more Nicks on campus” regardless of how troublesome Salerno could be in print.

"He was an amazing person. We’ll not see his like again.”
— John Ratliff, former ASU Shakespeare professor

Salerno attributed his decision to become a university professor to his longtime friend and mentor, John Ratliff, then a Shakespeare professor at ASU. At Ratliff’s urging, Salerno applied to eight prestigious graduate schools and won fellowships to all of them, including Harvard and Yale; he chose to attend Stanford. After earning his doctorate there in Victorian literature and Latin language and literature, he returned to a permanent teaching position at ASU in 1961.

Ratliff, now 94, calls Salerno “a helper, a generous soul” who could always be relied upon to give whatever was needed. 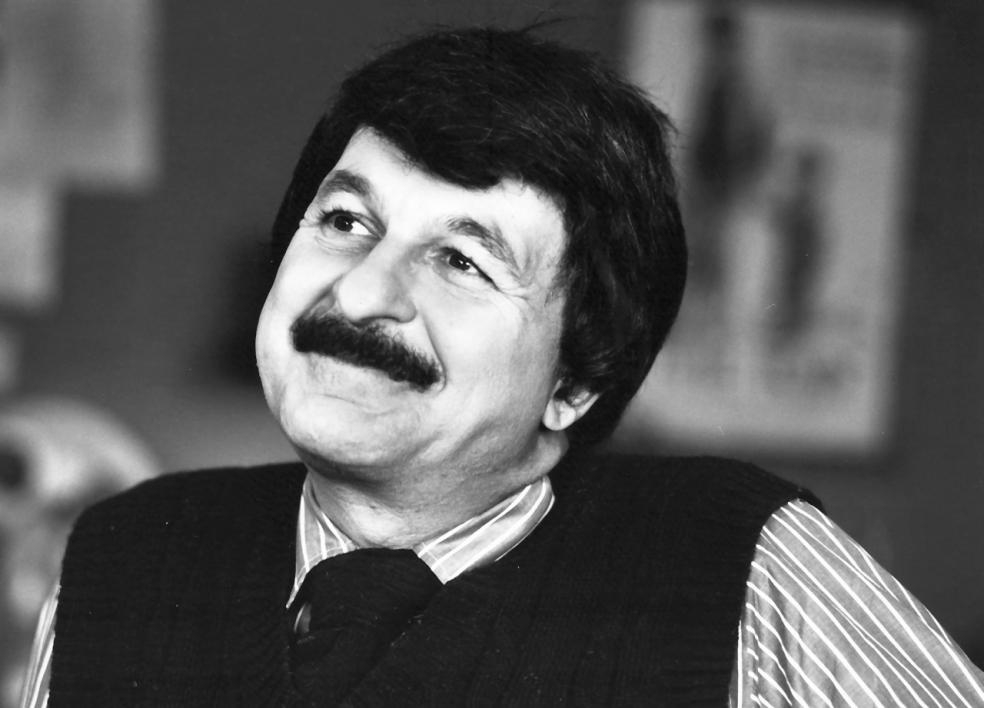 Nick Salerno used to claim he "grew up in the dark" due to his love of movies. His mother took him to two films a week while she was learning English, and as a young boy he developed a lifelong love of cinema. 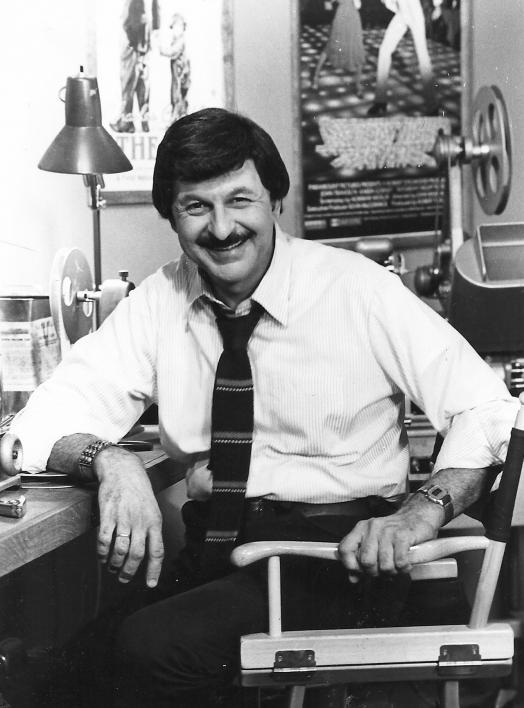 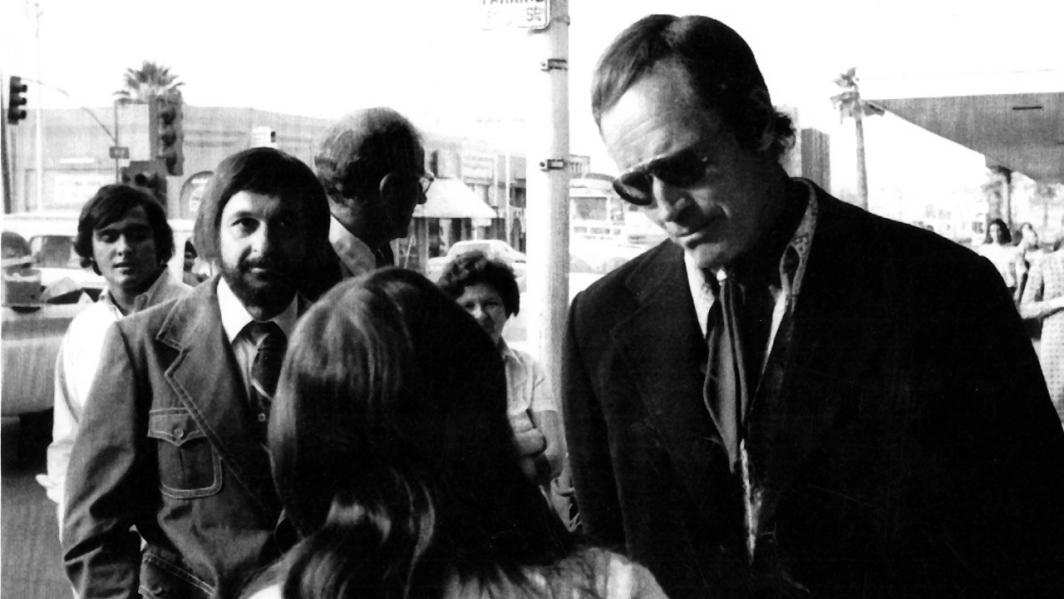 Charlton Heston talks to students in front of Valley Art movie theater in Tempe. Salerno (at the left) frequently persuaded actors to speak to his ASU film students. 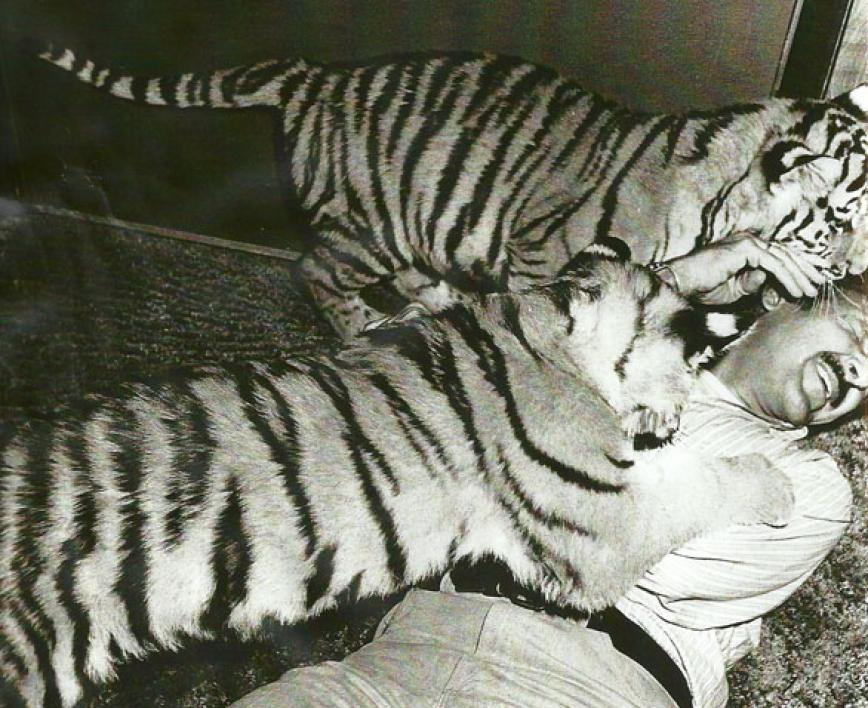 A favorite memory of Salerno's 10 years in television was the afternoon he spent playing with lions and tigers at the ranch of "Hitchcock" actress Tippi Hedren. 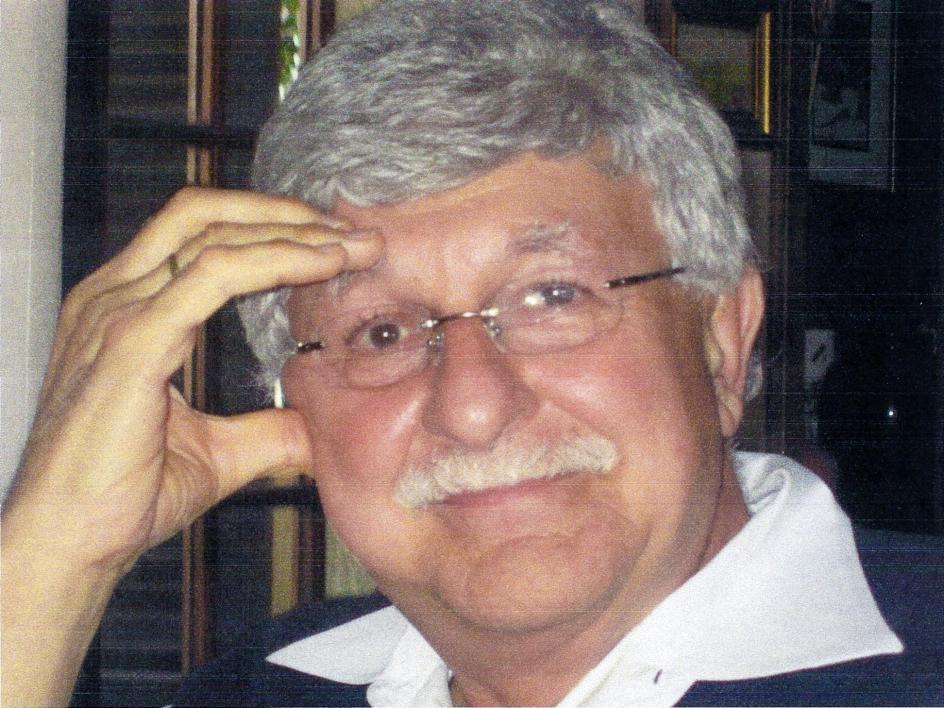 “He had a large community of friends who he would do anything for. He helped faculty with health problems get to their doctor’s appointments and do their shopping; he helped students with their education and careers,” Ratliff said. “He was an amazing person. We’ll not see his like again.”

Salerno’s rapport with students was evident. In the student protests of the tumultuous ’60s, ASU students had occupied Old Main in a sit-in. Angry administrators tried various means to dislodge them, and then the Arizona governor called in the National Guard. Although this was pre-Kent State, Salerno worried about the students’ safety. Without permission from anyone, as he said in a later interview, he entered the building and negotiated with them. After they agreed to leave, he convinced administrators to not punish them.

As chair of the English Department from 1983 to 1988, Salerno helped create the Writing Center, the Humanities Computing Center and the MFA in Creative Writing. He was instrumental in helping two students become ASU’s first Rhodes scholars and coached the university’s winning college bowl team in 1964. He taught the first film-appreciation courses available at ASU.

Salerno’s love of film led him to a second career in television. He told friends he “grew up in the dark” because of the many films he viewed as a child. As the host of Cinema Classics on the local PBS affiliate, which ran for 10 years including three in national syndication on PBS, he became a household name in the Valley. He showed uncut classic films, gave commentary on them and interviewed hundreds of actors, including Sean Connery, Natalie Wood, Dustin Hoffman, Charlton Heston and Robert Osborne, whose own show on TCM later resembled Salerno’s.

Phoenix New Times reporter Robrt Pela recently described Cinema Classics as “a lifeline” when he was a teenager.

At various times Salerno served as film critic for the New Times, the Scottsdale Progress, KAET and the local ABC outlet.

“Nick was a master, a genius. Film aficionados were treated to films they would otherwise never have been able to see in the Valley."
— Dan Harkins, Harkins Theatres

Dan Harkins met Salerno when he was 19, when he took a film-appreciation course from him. Salerno and Harkins later went on to create a new market for film buffs in the Valley, as Harkins expanded the chain of theaters inherited from his father. Harkins remembers that “without Nick, there would have been no Harkins Theatres.” When Harkins was unable to outbid larger theaters for major box-office films, he went to Salerno for advice. “He had an encyclopedic knowledge of films as well as ideas on how to make them marketable.”

Salerno suggested Harkins Camelview as a venue for the lesser-known independent or foreign films, by such filmmakers as Fellini, Truffaut or Kurosawa. Although Harkins had no trouble booking these films, he was banned from advertising them in the newspaper, because unrated films were assumed at the time to be X-rated or “smut” films. Salerno brought Harkins onto his popular Cinema Classics to help promote his films. Salerno and Harkins also hosted invitational screenings to invite movie goers to give them individual ratings and to promote the films by word of mouth.

“Nick was a master, a genius. Film aficionados were treated to films they would otherwise never have been able to see in the Valley,” Harkins said.

After Salerno’s retirement in 1991, he continued an active involvement in Arizona arts and the Arizona Film Commission, as well as serving on the board of directors for Phoenix Little Theatre, Scottsdale Community Players, Arizonans for Cultural Development, Desert Dance Company and other local arts groups.

Salerno was also an avid collector, reflected in the variety and number of valuable gifts he made to ASU Library Special Collections. These included materials connected to the “Star Wars” franchise, “Wizard of Oz,” film history, soundtracks, press kits, and personal papers and materials devoted to his many other personal enthusiasms, such as Victorian literature and the pre-Raphaelites, animal rights, and “pirate” Portland publisher Thomas Bird Mosher. Salerno was completing a book about Mosher at the time of his death.

Salerno also developed an interest in the Middle East and the city of Petra, which was one of the Jordanian locations for the film “Lawrence of Arabia.” A teaching assistant in the English Department, Lutfi Hussein (now a teacher at Mesa Community College) met Salerno and they formed a friendship. “He knew I was from Jordan,” said Hussein. “Knowing that I came to the U.S. as an immigrant, he was so kind to me. He was keen on showing me all the American things he loved in literature and the arts. I couldn’t have found a better tour guide to all things American.”

Nick Salerno died peacefully in the early morning hours of March 15. A memorial service will be at Our Lady of Perpetual Help, 7655 E. Main St. in Scottsdale on Wednesday, March 23, at 10 a.m., followed by a procession to graveside services at St. Francis Cemetery, 2033 N. 48th St. in Phoenix.

Before his death, Nick Salerno requested that contributions in his name be made to Roscoe Animal Retreat, PO Box 432, Roscoe IL 61073. They may be reached at RARARF@aol.com. All contributions are tax deductible.

Arizona PBS invites the Arizona State University community to apply for a chance to have their antiques and heirlooms featured on the third season of “Arizona Collectibles.”The Arizona PBS original series, hosted by radio personality Beth McDonald of KESZ-FM, spotlights antiques, heirlooms and other collectibles found in homes across Arizona.ASU alumni, faculty, staff and students are invited ...

Arizona PBS invites the Arizona State University community to apply for a chance to have their antiques and heirlooms featured on the third season of “Arizona Collectibles.” 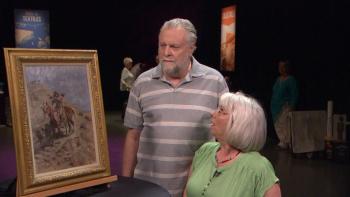 The Arizona State University community is invited to apply for a chance to have their antiques and heirlooms featured on the third season of “Arizona Collectibles” on Arizona PBS. Download Full Image

ASU alumni, faculty, staff and students are invited to submit a description of an item at azpbs.org/collectibles. Those selected will receive a complimentary admission ticket to the show on the weekend of April 9-10 and one free evaluation.

Additional evaluations can be purchased for $35 both days of the event. The deadline to submit an item is Monday, April 4. Based on the outcome of the appraisers’ evaluations, guests may be invited to appear on camera with their collectibles.

“‘Arizona Collectibles’ is such a fun way for Arizonans to find out what their family treasures may be worth,” said Arizona PBS producer Margery Punnett. “Our team at Arizona PBS gets so excited for the big evaluation weekend because we never know what someone will bring into the studio.”

The program’s second season featured a variety of items, including a painting by American western artist Charles Marion Russell valued between $750,000 and $1.25 million and a Luis Vuitton trunk with an estimated value between $6,000 and $8,000.

Interested individuals can receive a special invitation to the evaluation event by pledging $125 and becoming members of Arizona PBS. As a thank you gift, these members will be provided a timeslot to have up to three items evaluated at no additional cost.

Each collectible must be within the 50-pound weight limit, and guests must be able to carry their own items for evaluation.

Categories of items eligible for evaluation include: