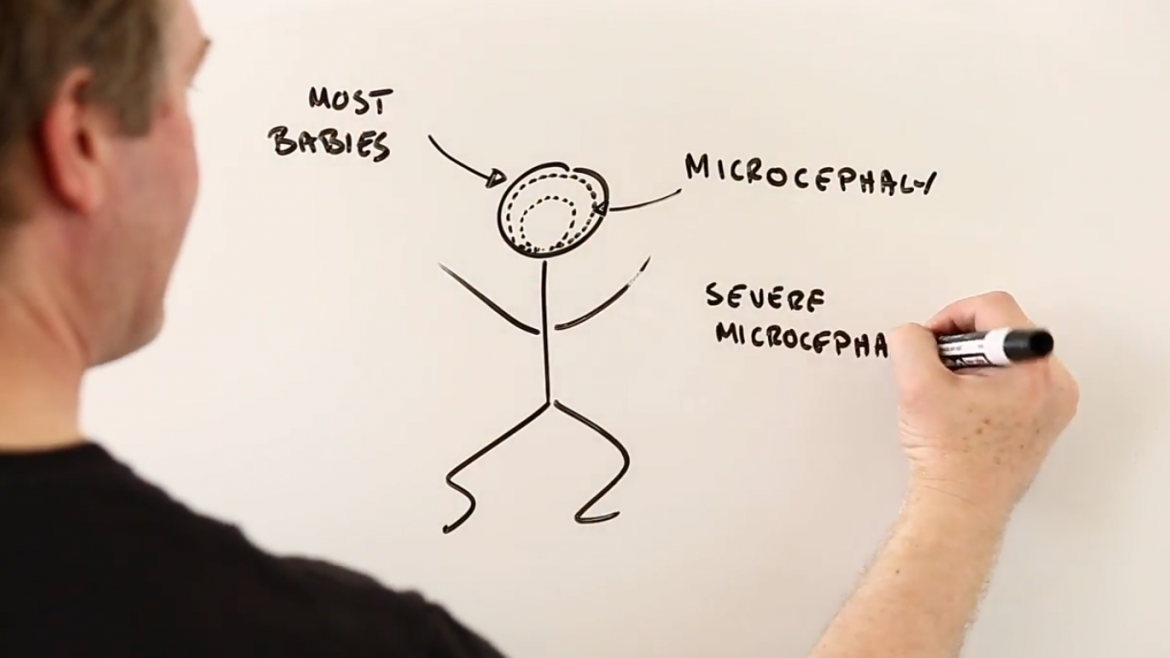 One of the scarier aspects of the Zika virus is the suggested correlation between microcephaly — a birth defect in which a baby’s head is significantly smaller than normal — and an infected mother.

Arizona State University professor Andrew Maynard was concerned that people were treating microcephaly as a “scary monster,” dehumanizing people afflicted by it and overlooking the fact that the disability “in many cases is less important than how we respond to it, and how we show our humanity through it,” he said.

So he decided to create a video called  “Five Things Worth Knowing about Zika and Microcephaly,” putting the birth-defect risk into context in a straightforward, engaging way.

Maynard knows about risk. He’s the director of the Risk Innovation Lab, a unique center focused on transforming how we think about and act on risk. He has created a number of “Risk Bites” videos on subjects ranging from measles to vaping to tanning beds.

This time, his team has produced the Zika video not just in English, but in Spanish and Portuguese as well — key, as South America is the hardest-hit area.

Watch the video below, and read on as Maynard, a professor in ASU’s School for the Future of Innovation in Society, explains his approach.

Question: What prompted you to make this video? In particular, what prompted the calm, “let’s dispel some worries” approach? Were you seeing people overreacting or responding through fear?

Answer: As someone who makes videos about risk, I thought that Zika, and microcephaly in particular, were important topics for us to address through Risk Bites. However, I didn’t want to make a “this is the science behind the risk” type of video, as this would be totally useless to women grappling with the real possibility that their child could have microcephaly because of a mosquito bite. Looking at the information that’s available, there seemed a lot about the science (what we know and don’t know about Zika and microcephaly), some about risk perceptions (and how people are exaggerating the risk) and quite a bit on cold, medical advice (like “don’t get pregnant”). But nothing that seemed that helpful to women who lived in Zika-infected areas, or who were visiting them, and who needed clear information that would help them make sense of their personal risks in a way that was personally useful.

The result was a video that didn’t provide an education on the science, or direct medical advice (because we’re not qualified to do that), but does hopefully put the risk in a context that will help people make sense of it from their personal perspective.  To do this, it’s important to recognize that this was a team effort, drawing on health-based students and faculty at ASU and at George Washington University.

Q: Why was it so important for it to be available in English, Spanish and Portuguese? Do you routinely do your Risk Bites videos in multiple languages?

A: This is the first time we’ve produced a video in anything other than English. However, because we wanted this one to be useful to people directly grappling with the threats of Zika and microcephaly, I wanted to make sure that it was accessible to as many affected people as possible. And to be frank, a video on five things worth knowing about Zika and microcephaly that was only understandable to English-speaking populations would have seemed inappropriate, given the areas where the issue is.

Fortunately, we’ve had a great team working on the non-English versions of the video to make this possible.

Q: Do you think the — as the video put it — large stack of questions compared with the small supply of answers is feeding the fear? What do people need to remember in such situations?

A: Certainly this imbalance between questions and answers can increase anxiety and leave people feeling powerless. A lack of answers also leaves the door open to people filling the gap, sometimes with explanations that aren’t supported by the science, but make people feel more secure anyway, or in the case of some theories (such as microcephaly being caused by genetically modified mosquitoes — a theory with no scientific basis, by the way), give them something concrete to be angry about. It’s a “monster under the bed” sort of situation, where our imaginations too easily fill in the blanks.

This is where it’s helpful to provide some context to a risk such as the possibility of your child getting microcephaly — essentially shining a light on the issue so it stops being the worst monster imaginable, and starts looking like something that, while it’s still very worrying, is handleable.

In situations like this, it’s important to realize that even though there’s a lot that’s not known, a risk that you have some understanding of is easier to deal with than one that you are completely in the dark over.

Q: The video mentions that condom use can also help prevent getting Zika from someone who is already infected. This is a less-reported way to get it; most of the media focuses on transmission by mosquito. You say that experts are still working out the risk, but does this also mean there’s a potential risk from other bodily fluids? (Cuts, saliva, etc.)

A: There’s a lot we don’t know about how Zika can be spread, other than through mosquitos. We know the virus can appear in blood and saliva, and there are possible indications that these might be viable exposure routes, but there are not currently indications that these are high-risk routes of exposure. More research is needed here. However, what we do know is that mosquitoes are the most likely way that the virus is spread.

Q: Do you see these videos as not only quelling fear, but acting as a public service announcement?

A: I’m not sure I would see these videos as quelling fear, but as empowering people to take control of the risks they face. And part of this is to provide people with understanding that’s rooted in science, that they can make use of. I’m not sure I would use the term “public service announcement,” but I would certainly hope that people find them useful to make better-informed decisions that protect their health, and that of others.

Q: What do you think is the most misunderstood aspect of the Zika outbreak?

A: Certainly, the rumors that have circulated about what might have caused the sudden outbreak — including the release of genetically modified mosquitoes and the use of a certain pesticide — don’t stack up when you look at the evidence, and potentially undermine efforts to control the infection.  But what stands out to me personally is the implicit assumption that microcephaly is a severely disabling condition, that sentences sufferers and their parents to a hard, harsh life.  Certainly, severe microcephaly is very difficult to deal with. But there are levels of microcephaly that aren’t nearly so debilitating, and that do not stop people with the condition living full and active lives.

Q: This is part of your Risk Bites video series. What is the mission of these videos?

A: The aim of the series is to make the science behind risk — what causes it, how it affects us and how to make sense of it — relevant and accessible to as many people as possible. Risk is a reality of being alive, and surprisingly, there’s a lot of cool science associated with it — the videos certainly cover that. But they are also aimed at helping people make sense of risk in ways that are useful to them personally in the decisions they make.

Taking part in a high-visibility event near the nation’s capital means you need to be on your toes. Just ask Zak Holman, an assistant professor in the School of Electrical, Computer and Energy Engineering in ASU’s Ira A. Fulton Schools of Engineering. He was displaying a technology at the recent ARPA-E Energy Innovation Summit near Washington, D.C., when Al Gore, the former vice president, wal...

Tempe campus , School for the Future of Innovation in Society , Innovation , Health care

Zika virus: The next pandemic? 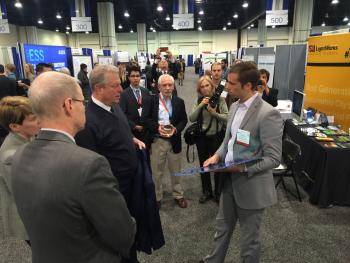 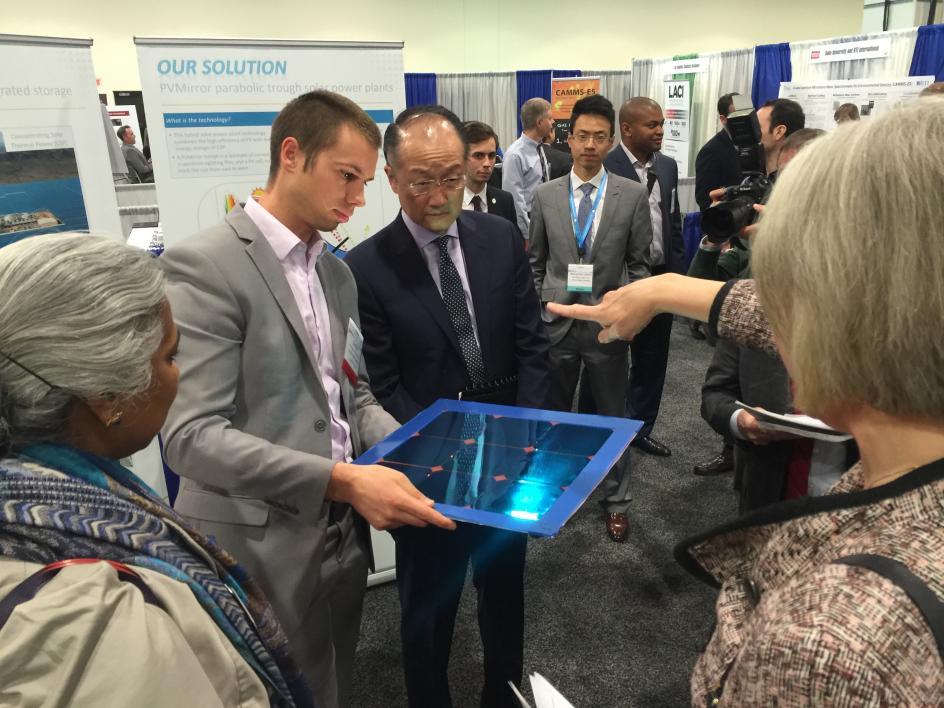