One hundred years after the birth of the late Edith Kinney Gaylord, a journalism pioneer and philanthropist, the foundation she established is finding new ways to invest in journalism’s future.

The Ethics and Excellence in Journalism Foundation has awarded Arizona State University’s Walter Cronkite School of Journalism and Mass Communication an $800,000 grant for students to learn and experience news innovation and to spread new ideas across journalism. 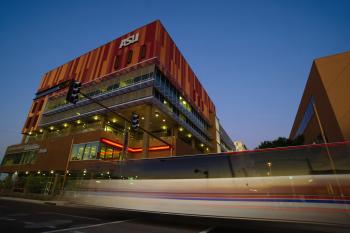 The Gaylord Initiative brings new courses in journalism innovation and entrepreneurship at ASU's Cronkite School, as well as a new professor of practice in data analytics and audience engagement. Download Full Image

The new grant funds the Edith Kinney Gaylord News Innovation Initiative at the Cronkite School. The program will serve as the innovation hub for Cronkite News at Arizona PBS, a multiplatform daily news division operated by the Cronkite School with 15 full-time editor/professors and more than 120 ASU students who produce daily news content on TV and digital platforms for Arizona audiences.

The Gaylord Initiative also brings new courses in journalism innovation and entrepreneurship at Cronkite, as well as a new professor of practice in data analytics and audience engagement.

As part of the initiative, Cronkite will work closely with the University of Oklahoma’s Gaylord College of Journalism and Mass Communication, which is named in honor of the Gaylord family, the former longtime publishers of The Oklahoman newspaper and the founders of the Ethics and Excellence in Journalism Foundation.

“We are excited to partner with Arizona State University’s Cronkite School of Journalism for the News Innovation Initiative,” said Bob Ross, EEJF president and CEO.  “This grant will allow them to continue providing a world-class journalism education utilizing the teaching-hospital model approach, and also form a stronger partnership with University of Oklahoma’s Gaylord College of Journalism under Dean Ed Kelley.”

Gaylord College students will participate in classes via video conference. Gaylord Initiative professors at Cronkite also will make regular visits to the University of Oklahoma to speak with classes and meet with faculty.

“Being able to collaborate with the Cronkite School will be of great benefit to our students, and a lot of fun as well,” Kelley said. “We are so grateful to Ethics and Excellence for its vision and willingness to invest in two journalism programs that want to help find innovative ways to ensure journalism has a bright and meaningful future.”

In addition to Pucci, the Gaylord Initiative includes other key Cronkite faculty members such as Eric Newton, the school’s first innovation chief, who led journalism initiatives at the John S. and James L. Knight Foundation for more than a decade.

“We are in the midst of one of the most exciting and tumultuous times in the history of American journalism, with the digital revolution disrupting economic models that stood for generations,” Callahan said. “The key to solving this challenge is to innovate. Thanks to the generous support of Ethics and Excellence in Journalism Foundation, we will be able to develop the next generation of journalists at two forward-looking journalism schools to be innovators.”

Ethics and Excellence in Journalism Foundation also awarded the Cronkite School a $150,000 grant over three years to continue hosting an Edith Kinney Gaylord Visiting Professor in Journalism Ethics. The visiting professorship annually brings a journalism leader to Cronkite to teach ethics and diversity. Past visiting professors have included Peter Bhatia, the current editor and vice president for the Cincinnati Enquirer; Sandra Mims Rowe, the former editor of The Oregonian newspaper; and Caesar Andrews, the former executive editor of the Detroit Free Press.

The Ethics and Excellence in Journalism Foundation, headquartered in Oklahoma City, was founded by Edith Kinney Gaylord, the daughter of Daily Oklahoman Publisher E.K. Gaylord. Edith Kinney Gaylord created the foundation in 1982 to improve the quality of journalism by supporting research and creative projects that promote excellence and foster high ethical standards in journalism.

In less than two years, a group of Arizona State University alumni have taken the seed of an idea and transformed it into a medical tech start-up that secured a $600,000 investment in a seed-funding round earlier this year. Neolight, a medical-device company focused on the development of phototherapy devices to treat jaundice in newborns, was started in the summer of 2014 by co-founders Vivek Ko...

In less than two years, a group of Arizona State University alumni have taken the seed of an idea and transformed it into a medical tech start-up that secured a $600,000 investment in a seed-funding round earlier this year.

Neolight, a medical-device company focused on the development of phototherapy devices to treat jaundice in newborns, was started in the summer of 2014 by co-founders Vivek Kopparthi, Sivakumar Palaniswamy, Chase Garrett and Deepak Krishnaraju. 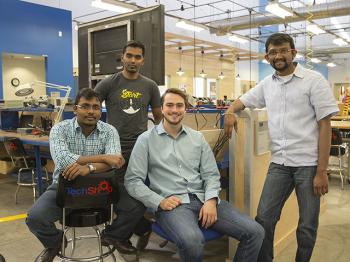 The nascent but rapidly developing company has a simple mission.

“Our goal is to eradicate casualties from neonatal jaundice and increase accessibility to treatment,” said Kopparthi, Neolight CEO and W. P. Carey School of Business alumnus.

Jaundice, a condition that affects six out of 10 infants worldwide, is caused by the build up of excess bilirubin due to the inability of an infant’s liver to filter out old blood cells.

Bilirubin is toxic to the central nervous system and can cause brain damage and even death.

Although jaundice is easily treatable with phototherapy, access to devices and electricity to run them is scarce in the developing world, resulting in 219 infant deaths in Africa daily, and more than 1,000 cases of brain damage or death each day in Southeast Asia.

Palaniswamy, an Ira A. Fulton Schools of Engineering alumnus, saw the shortcomings of current jaundice treatment firsthand while working in a hospital in India.

“It was heartbreaking to see five jaundiced babies hoping to see another day under a single blue halogen bulb hanging from the ceiling,” said Palaniswamy.

The phototherapy devices in the hospital represented many of the limitations of current treatment methods. They were bulky, taking up valuable space in an already crowded neonatal intensive care unit, produced excess heat and did not meet the treatment standards required by American Academy of Pediatrics and the U.S. Food and Drug Administration (FDA) guidelines, according to Palaniswamy.

“Every day at the hospital, I asked myself, ‘Isn’t there a better way to do this?’ ” he recalled.

Fast-forward to today, and Palaniswamy has answered his own question.

Opposed to using halogen or compact fluorescent tube lamps, the company’s phototherapy device uses cost-effective LED (light-emitting diode) lights that emit light on a narrow spectrum, both speeding up treatment and eliminating side effects like dehydration, skin irritation and erythema. Moreover, Neolight’s device is compact, modular and simple, removing the need for skilled labor to set up and maintain the product.

“If a module breaks, users around the world don’t have to ship their entire device back to us,” explained Kopparthi. “Instead, we simply ship them another module and they’re back to delivering the care their patients need.”

It can also draw power from renewable sources such as solar modules, solving the problem of unreliable energy faced by health-care professionals in developing nations.

The journey from idea to rapidly growing company started with an Edson Student Entrepreneur Initiative grant, which kick-started the team’s endeavor with a $7,000 award.

Open to all ASU students, the Edson Student Entrepreneur Initiative provides support needed to start and grow a venture. The program has enabled more than 260 student teams advance to their ideas in the past 10 years.

The initial award was increased to $25,000, which propelled the company forward to securing more investments, such as the $600,000 Neolight from local anonymous angel investors. The most recent investment will go toward clearing their device with the FDA.

“The Edson program gave us a solid foundation to build upon,” said Garrett, Neolight’s vice president and a Fulton Schools civil engineering graduate. “They offer many things such as Startup School, access to speakers, and programs like pitch practice, which were all tools we could use to navigate through the start-up environment in a way that best fit our needs.”

Support from ASU also came in the form of access to resources at TechShop at ASU’s Chandler Innovation Center, as well as office space at Skysong innovation center, where the company is based.

As well as its ties to ASU, Neolight has established partnerships with the Children’s Hospital Los Angeles and Dignity Health.

Looking to the future, Kopparthi said Neolight plans to begin selling its device within the year, and potentially exploring the use of its technology to treat other ailments.

Much like Neolight’s bold mission to eliminate jaundice casualties, the company has grand plans for the future.

“In five years, we will be the Tesla Motors of medical devices,” said Kopparthi.

Learn more about Neolight and its work.