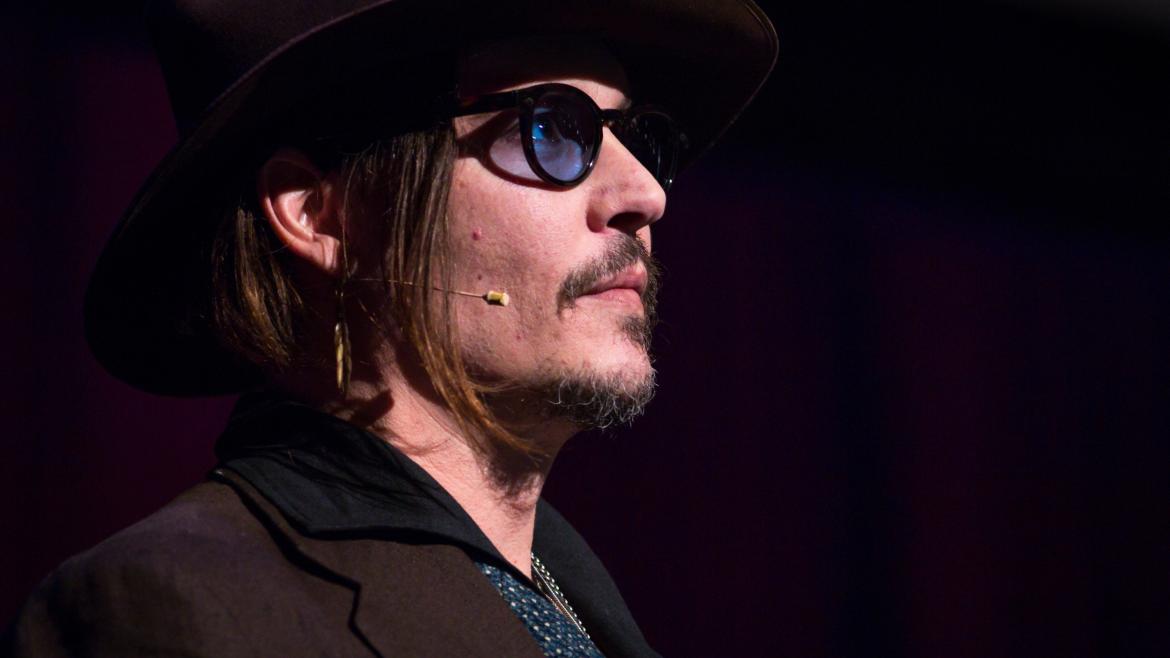 On madness and creativity

Socrates once said, “The greatest blessings granted to mankind come by way of madness, which is a divine gift.”

“If you have it, you have it,” Depp said of madness. “If you don’t have it, great. But don’t romanticize it.”

A clip depicting his portrayal of John Wilmot, Second Earl of Rochester, a Restoration playwright and satirist, dying of alcoholism and syphilis, brought home the point. 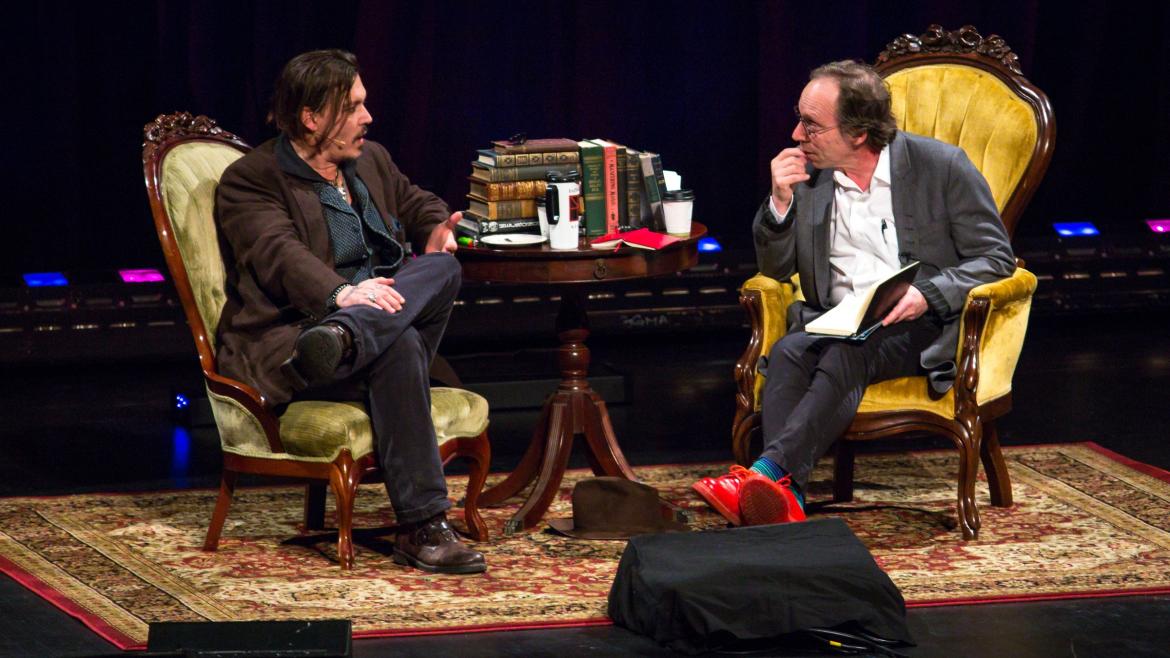 The onstage discussion between Depp and Krauss focused on the humanity of madness, revealing Depp's experience and creative method as an actor who has portrayed eccentric fictional and nonfictional characters while exploring and unraveling the intricate links between creativity and madness. It also sometimes just veered into humorous stories, as the Origins dialogues can.

Krauss, a theoretical physicist and cosmologist, Foundation Professor of the School of Earth and Space ExplorationThe School of Earth and Space Exploration is an academic unit of the College of Liberal Arts and Sciences., director of its Origins Project, and the only physicist to have received awards from all three major American physics societies, introduced Golden Globe winner and renowned actor, producer, author and musician Depp, portrayer of fictional characters such as swashbuckling pirate Jack Sparrow, candy baron Willy Wonka and demented milliner The Mad Hatter.

“With Origins, we always like to connect science and culture as much as possible,” Krauss said. “He finds the creativity in madness.”

(The Saturday performance, incidentally, gave Krauss the lowest Erdos-Bacon-Sabbath score ever. Click here to read what that is — and how Depp could surpass him.)

Before a packed crowd at ASU Gammage, Depp told a story about a conversation he had with Marlon Brando. Brando asked how many films Depp was doing per year. Two or three, Depp told him.

“That’s too many,” Brando said. “We only have so many faces in our pocket.”

“Unfortunately, because of my madness I feel like there’s a lot of faces left in my pocket,” Depp said. “If you think of yourself as a chest of drawers, they’re all in there. And that’s not healthy.” 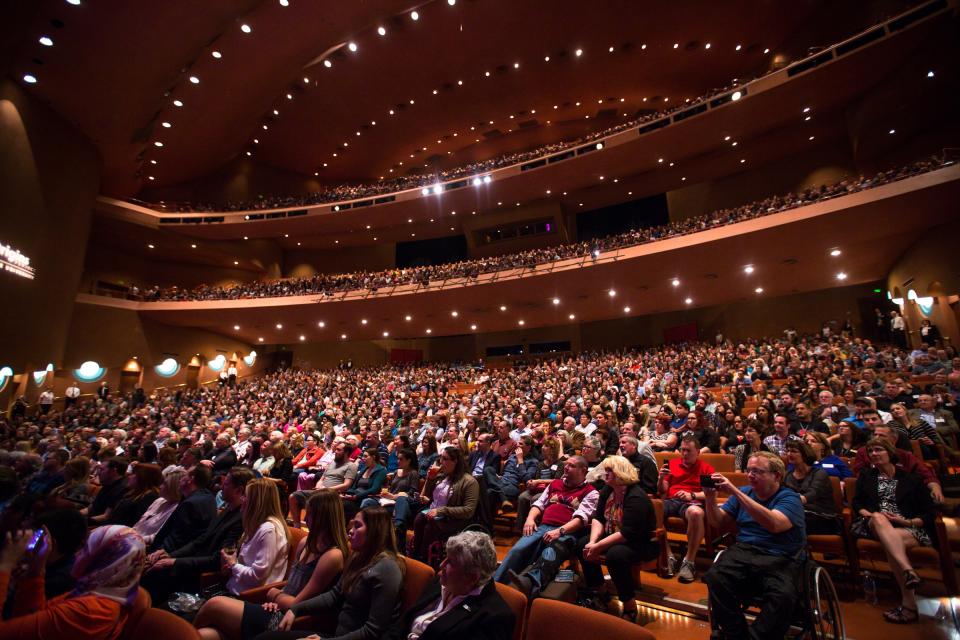 Krauss asked Depp when he first realized he was strange.

“Pretty early on,” Depp said. “I never wanted to be ‘inside.’ Those people bored me.”

Depp recounted being fascinated by freethinkers like Van Gogh and Jack Kerouac. “I became an actor by mistake,” he said. “It happened out of need — the need to pay rent. ... I felt I had something to offer. I didn’t know if it was right or wrong.”

“You’ve never seen any of your films,” Krauss said.

“I saw half of one once,” Depp said, recounting a director’s screening where he fell asleep “35 times.”

Childhood stress was a great driver in the formation of Depp’s creative persona.

“I believe it’s exactly what made me what I am,” he said.

Year in Review: This guy? He knows people

Editor's note: This story is being highlighted in ASU Now's year in review. To read more top stories from 2016, click here.As subtly as the shift in a gravitational wave, the universe changed Saturday night.Lawrence Krauss’ Erdos-Bacon-Sabbath number became the lowest in history, placing him ahead of Stephen Hawking, Thomas Edison and Fred Rogers.His appearance with actor Johnny Depp at the la... 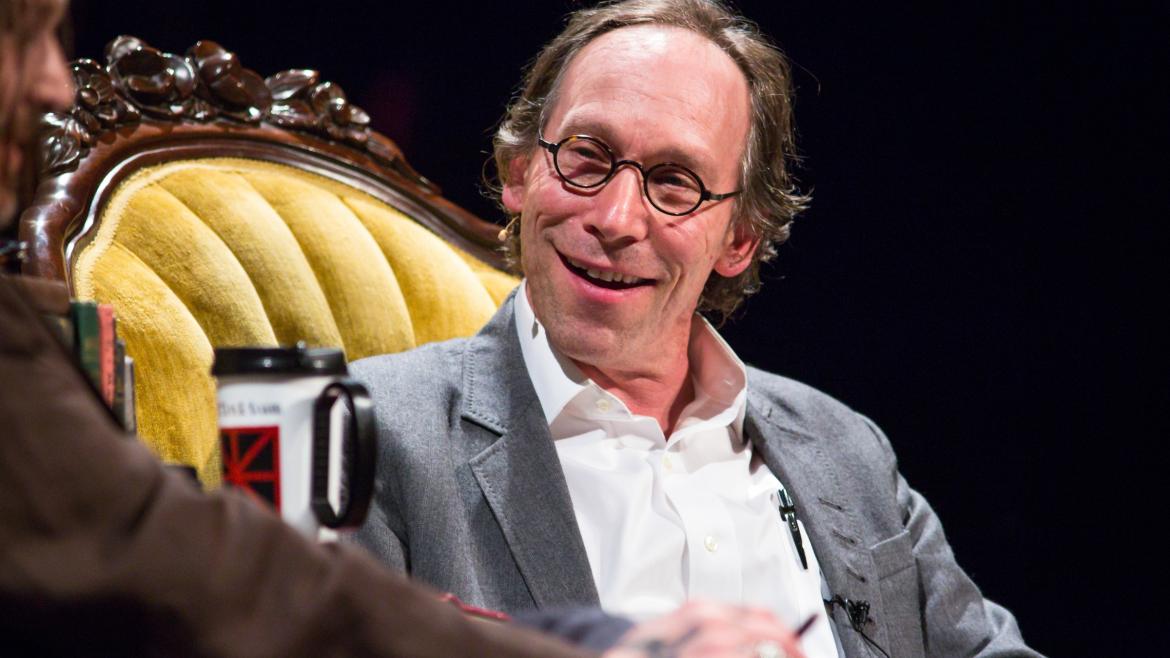 This guy? He knows people

As subtly as the shift in a gravitational wave, the universe changed Saturday night.

Lawrence Krauss’ Erdos-Bacon-Sabbath number became the lowest in history, placing him ahead of Stephen Hawking, Thomas Edison and Fred Rogers.

His appearance with actor Johnny Depp at the latest Origins Project Dialogues The Origins Project Dialogues are a series of intimate, thoughtful and entertaining conversations with scholars, public intellectuals and interesting personalities.at Arizona State University on Saturday night brought his Erdos-Bacon-Sabbath number down to a seven — the lowest ever, as confirmed by the project’s curators.

Krauss, a theoretical physicist and cosmologist, Foundation Professor of the School of Earth and Space ExplorationThe School of Earth and Space Exploration is an academic unit of the College of Liberal Arts and Sciences. at ASU, director of its Origins Project and the only physicist to have received awards from all three major American physics societies, now has a seven following his appearance with Depp. Krauss said his new EBS standing shows how remarkably interconnected the world is, in ways few would have imagined in advance.

“It cements my own view that science, art, literature, film and music are much closer in spirit than many imagine,” he said. “It also demonstrates to me how lucky I have been in my own life to meet and interact with remarkable people in wide variety of areas. ... I never expected this.  It is fun and remarkable to think how connected we are to others, and also to reflect on how lucky I have been in my life’s journey thus far.”

Here’s how it works:

“My actual Erdos number is 3 (Shelly Glashow, a frequent collaborator of mine, has an Erdos number of 2),” Krauss said.

Depp, having appeared with Kevin Bacon in 2015’s Black Mass, has a 1, so Krauss now has a Bacon number of 2.

Depp has played directly with members of Black Sabbath, giving him a 1. Krauss now has a Sabbath number of 2.

Sean O’Connor, a self-described middle-age science geek living in San Diego, and Ross Churchley, a graduate student at Simon Fraser University in Vancouver, British Columbia, whose research field is graph theory, the mathematical study of networks, are the co-creators and co-curators of the project.

“Yes, I can confirm that seven would still set the land-speed record for EBS numbers,” O’Connor said before Saturday’s event. “Three individuals are tied at eight (Stephen Hawking, Ray Kurzweil and Daniel Levitin) ... in short, this will be the biggest news in the EBS universe in years.” 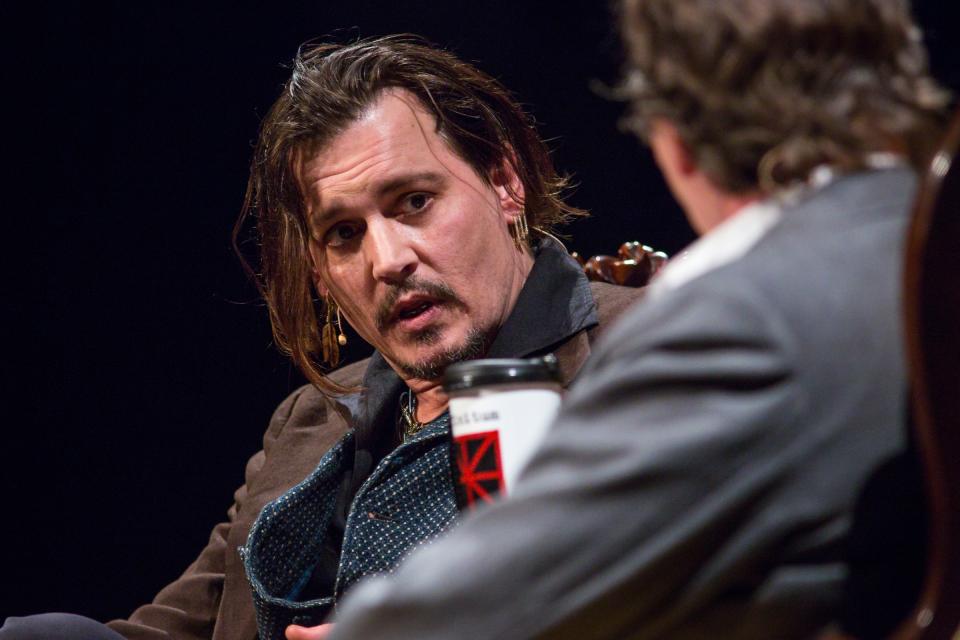 If Johnny Depp (shown Saturday at ASU Gammage) were to co-author a paper with ASU professor Lawrence Krauss, he would have the lowest EBS score ever.

The honor carries no privileges, like the right to wear a chartreuse robe, or titles, like the Emperor of Jupiter, but it does grant the bearer the self-satisfaction of being well-connected, Churchley said.

“Although maybe we should make T-shirts or something,” he said. “Of course, with great bragging rights also comes great responsibility: to connect with the less well-connected and reduce as many other people's Erdos, Bacon, and Sabbath numbers as possible. The greatest ambition of an EBSer is to become a hub of collaboration like Erdos was, so that one day we might talk about somebody's Krauss number!”

Krauss’ first thought was that it wouldn’t be fun anymore if there were a Krauss number.

“But in fact as I reflect on this, the number is in a broad sense arbitrary, so that any reasonably connected representative of diverse fields might probably produce similar values,” he said. “(It might be fun to test this idea) so if anyone thought I was a representative that was sufficiently recognizable so that someone could actually determine their Krauss number easily, that might be nice. And I do like interacting with as many different sorts of individuals as possible in my life, so if I could merely serve as a medium for reducing others’ EBS numbers I suppose that might be a positive thing.”

The next most likely candidate to eclipse Krauss’ standing sat next to him onstage Saturday night. If Depp co-authors a paper with Krauss, he would have a 5 (3-1-1).

“I would love it if Depp got an Erdos number by working with Dr. Krauss!” Churchley said. “It would be very much in the collaborative spirit of the project if one EBS holder created another with a joint paper.”

There was an EBS moment at the Origins talk. Depp talked about meeting force-of-nature journalist Hunter Thompson at the Woody Creek Tavern outside Aspen, Colorado.

“I’ve been there,” Krauss said. “I took Stephen Hawking there.”

“I wish we’d all been there together,” Krauss said.