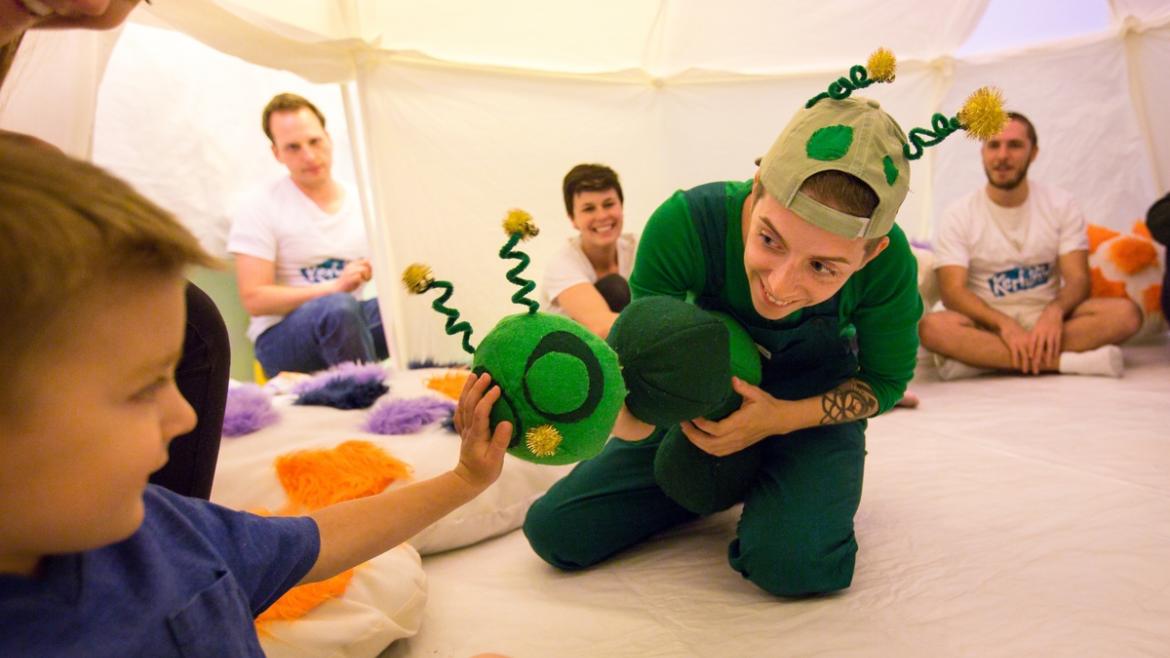 ASU MFA student creates Kerfuffle, a theater for young children.
What is with the "Caterpillar's Footprint"? Lots of kid-friendly fun.
March 8, 2016

Ashley Laverty doesn’t mind when her shows have an element of chaos.

In fact, she encourages it.

It’s also the reason why the Arizona State University student has named her theater company Kerfuffle, which means a commotion or fuss. The company produces interactive performances for children age 5 and younger.

“Obviously things will always go wrong in a production and that is OK. We don’t try and fix it. This is a show for children under 5, and we want them to behave like they’re under 5. They don’t have to sit still if they don’t want to.”

Laverty’s words come on the eve of her first production, “The Caterpillar’s Footprint,” which began an 18-show engagement at Mesa’s i.d.e.a. Museum on Tuesday. It runs through March 13. 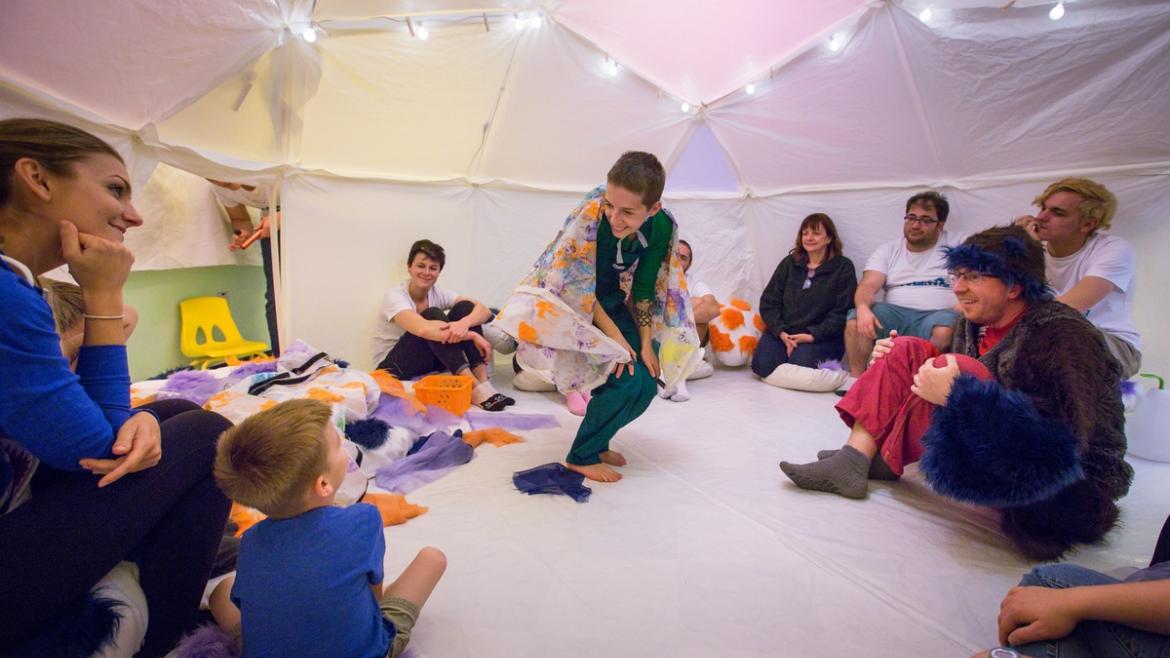 Actor Amanda Pintore (center) emerges
as a butterfly near the end of a dress
rehearsal of "The Caterpillar's Footprint"
at the i.d.e.a. Museum in Mesa on
March 7.

The 30-minute magical show takes the audience on a journey through a fantasy forest where a bear, a dinosaur and a fox meet a caterpillar. Featuring music and puppets inside a 14-foot dome with mushroom-cap seats, it’s designed to engage very young audiences.

A recent dress rehearsal started when the bear and the dinosaur chummed up Owyn and Joel Gramp — ages 6 and 3, respectively — in an outside play area. Once the Gramps became familiar with the characters, they were invited into a “forest,” which included rugs, logs, pillows and flowerpots. After a few minutes, the flap of the Kerfuffle tent was opened and the two were treated to the performance. The boys smiled, giggled and laughed aloud at times. Their eyes also revealed a few lightbulb moments.

“I saw a need for this type of theater because it just doesn’t exist in Arizona,” Laverty said of targeting very young children. “This is a way for young children to sit and watch theater that fosters their imagination, helps develop their brains and to be engaged with the characters.”

“There are lots of moments during the show where we interact with each individual in the audience and they have the option to speak, laugh, react or not even go into the tent,” said Pintore, who plays the part of the curious caterpillar. “We’re not going to tell them, ‘No,’ or how to react or behave as long as they are safe. We don’t have traditional expectations of our audience.”

Waldron, who plays the part of the bear and the fox, said “The Caterpillar’s Footprint” is special because it’s reactive to each individual child.

“As a performer there is a certain structure, but we improvise based on what they give us,” Waldron said. “We greet each child and realize their ideas and creativity in real time.” 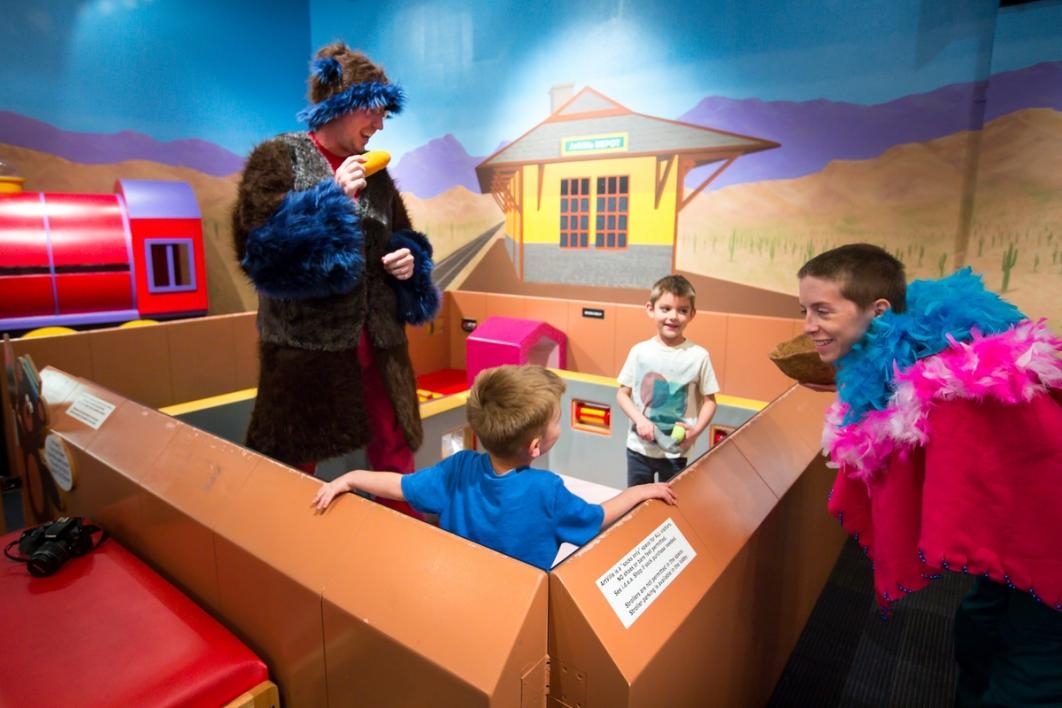 Actors Andy Waldron (left) and Amanda Pintore (right) greet Joel Gramp, 3, and his brother Owyn Gramp, 6, at the start of the dress rehearsal for the Kerfuffle production of "The Caterpillar's Footprint" at the i.d.e.a. Museum in Mesa on March 7. 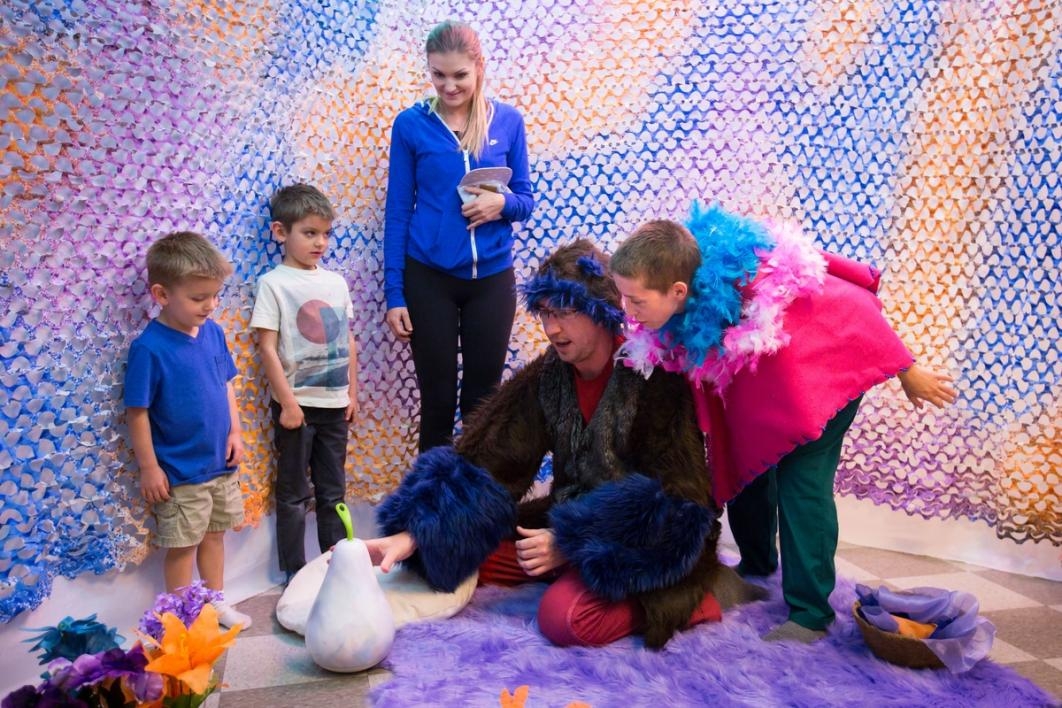 Actors Andy Waldron, as a bear, and Amanda Pintore, as a caterpillar, play with a large pear as Joel Gramp (left), 3, brother Owyn Gramp, 6, and mother Chelsea Marsh look on at the beginning of the dress rehearsal of the Kerfuffle production of "The Caterpillar's Footprint." 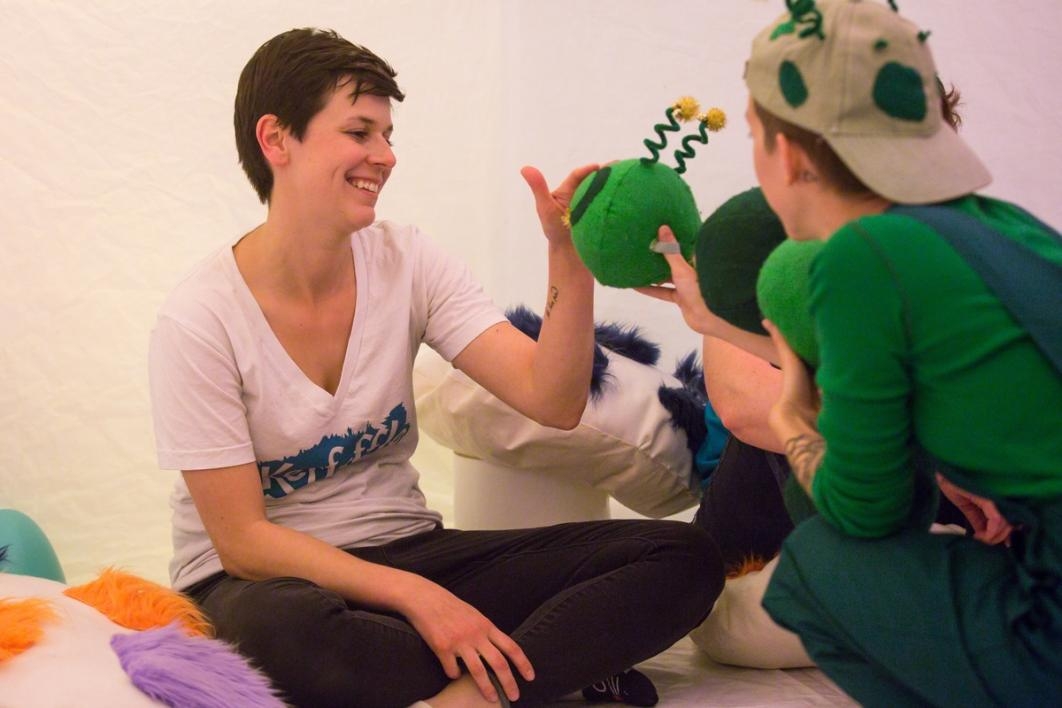 Actors Amanda Pintore, as a caterpillar, and Andy Waldron, as a bear, perform during the dress rehearsal of Kerfuffle production of "The Caterpillar's Footprint." 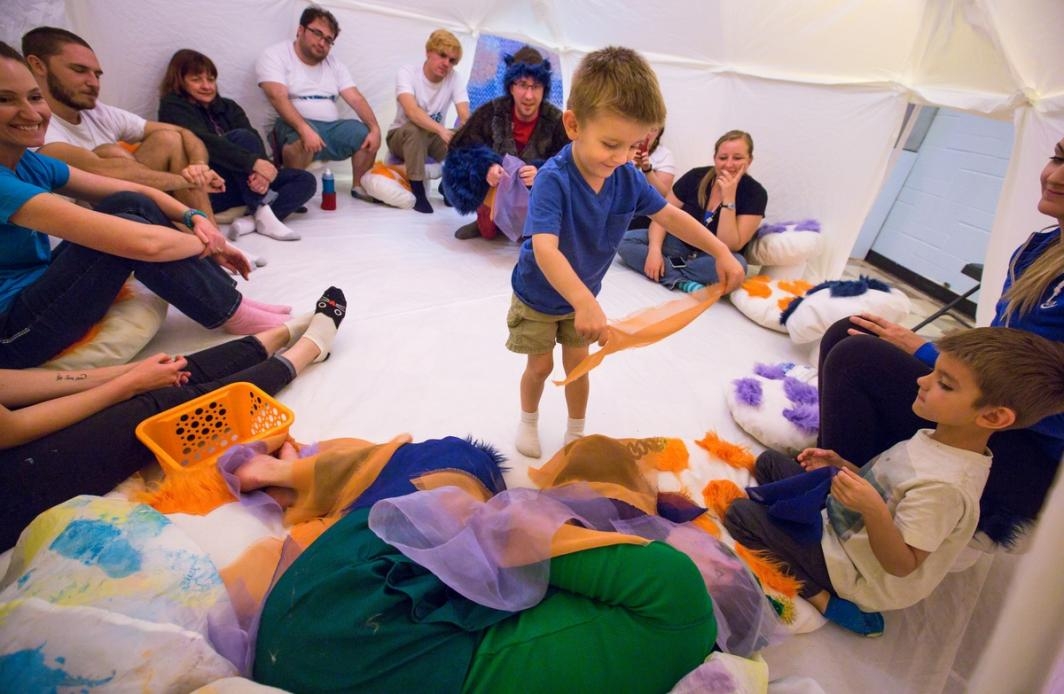 Three-year-old Joel Gramp, of Tempe, lays a colored scarf on the caterpillar, Amanda Pintore, as part of her cocoon in the dress rehearsal of the Kerfuffle production of "The Caterpillar's Footprint."

Laverty, a former children’s theater actress in New York City, playwright and artist in residence at Lowell Elementary School in Mesa, said starting Kerfuffle has been challenging at times but ultimately rewarding.

“I’ve never started a theater company before and I’ve never written a thesis before, so combining these two elements for my applied project has been stressful,” Laverty said. “But I must say to see these young children so engaged and affected has been amazing, which makes it all worth it. It’s really been special.”

Top photo: Actor Amanda Pintore, as a caterpillar, allows 3-year-old Joel Gramp to touch her head in the dress rehearsal of Kerfuffle production of "The Caterpillar's Footprint" at the i.d.e.a. Museum in Mesa, on March 7. Photo by Charlie Leight/ASU Now

Ryan Garrison, a School of Music alumnus who received a master's degree in choral education in 2006 and a Doctor of Musical Arts in choral conducting in 2013, has been named the winner of a 2016 Grammy Award. The award was as a member of The Phoenix Chorale for "Best Choral Performance (Rachmaninoff: All-Night Vigil)." It is his second Grammy Award in seven years.Garrison, a baritone, won his firs...

Translating innovation from the lab to the marketplace

Ryan Garrison, a School of Music alumnus who received a master's degree in choral education in 2006 and a Doctor of Musical Arts in choral conducting in 2013, has been named the winner of a 2016 Grammy Award. The award was as a member of The Phoenix Chorale for "Best Choral Performance (Rachmaninoff: All-Night Vigil)." It is his second Grammy Award in seven years.

Garrison, a baritone, won his first Grammy Award in 2009, also with The Phoenix Chorale, for "Best Small Ensemble Performance for the album Spotless Rose: Hymns to the Virgin Mary." He currently works at Arizona School for the Arts. He is now in the 12th full season with The Phoenix Chorale, and is in his ninth year as choirmaster at The Church of the Epiphany Tempe. Congratulations to all for this amazing accomplishment!