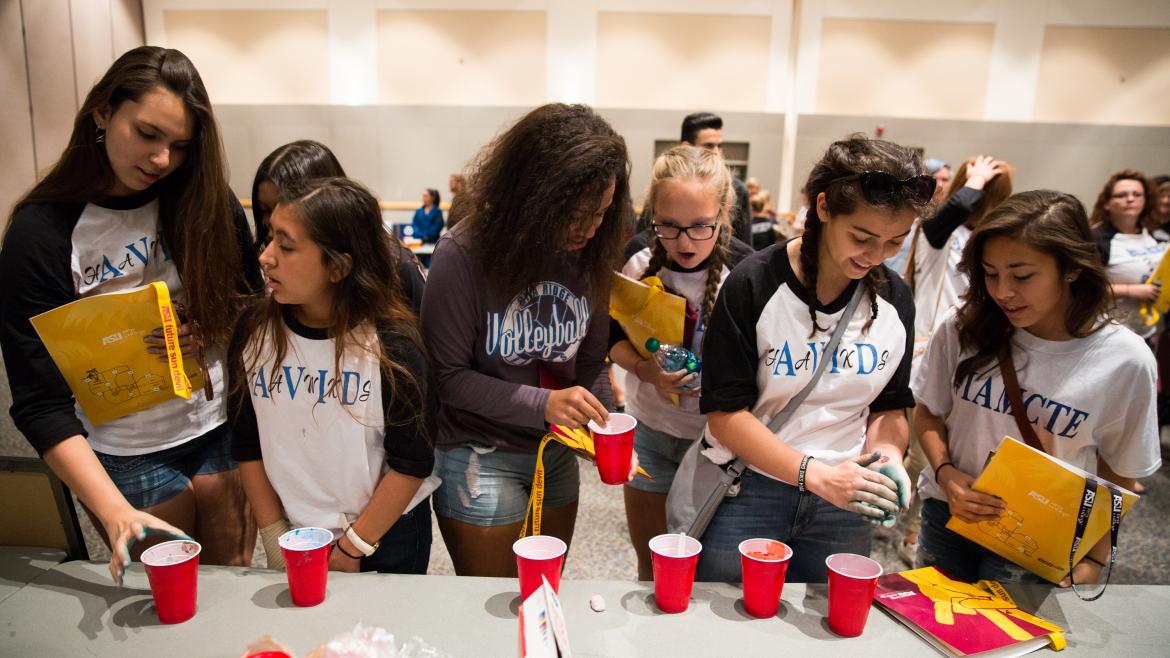 A lesson in forensics

It's a job that's been glamourized through many television crime shows, but that doesn't make "real" forensics work any less interesting. Last week, students from different Arizona and California high schools traveled to Arizona State University's West campus to learn about the university's forensics program, taught out of the New College of Interdisciplinary Arts and Sciences.

ASU's bachelor's in forensics prepares students in a variety of disciplines — such as biology, chemistry, mathematics and computing. And the application of forensic science isn’t limited to the courtroom. Hospitals often use forensic science to determine cause of death in autopsies, and insurance companies have used forensic science to analyze data for claims. Students of forensic science are also qualified to work in private labs that do biological analyses, and they are well-prepared to continue on to law or medical school.

Here's a look at those students checking out ASU's forensics work. 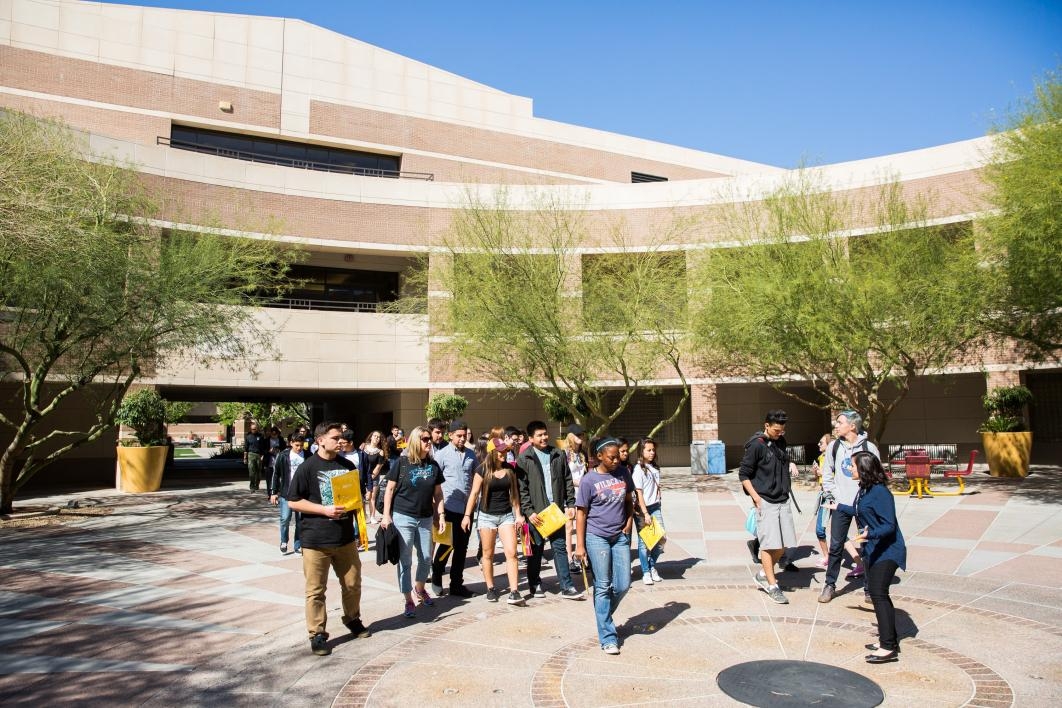 Students from Gila Ridge High School, in Yuma, Arizona, get a tour of ASU's West campus and a chance to visit the forensics lab during ASU Forensics Day, March 4. 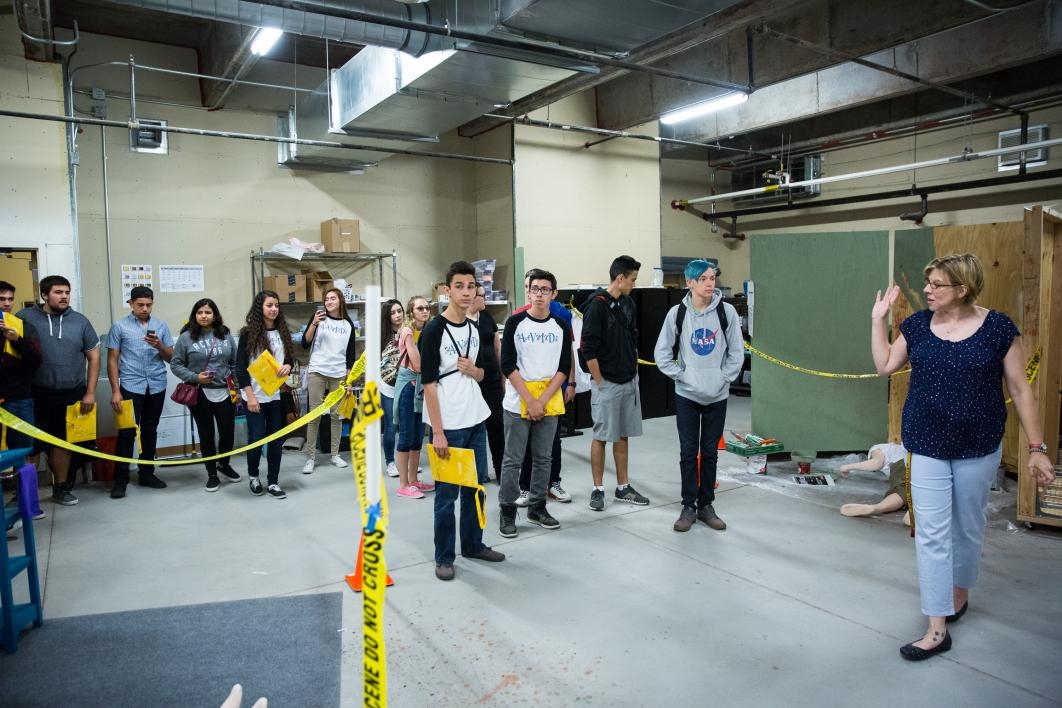 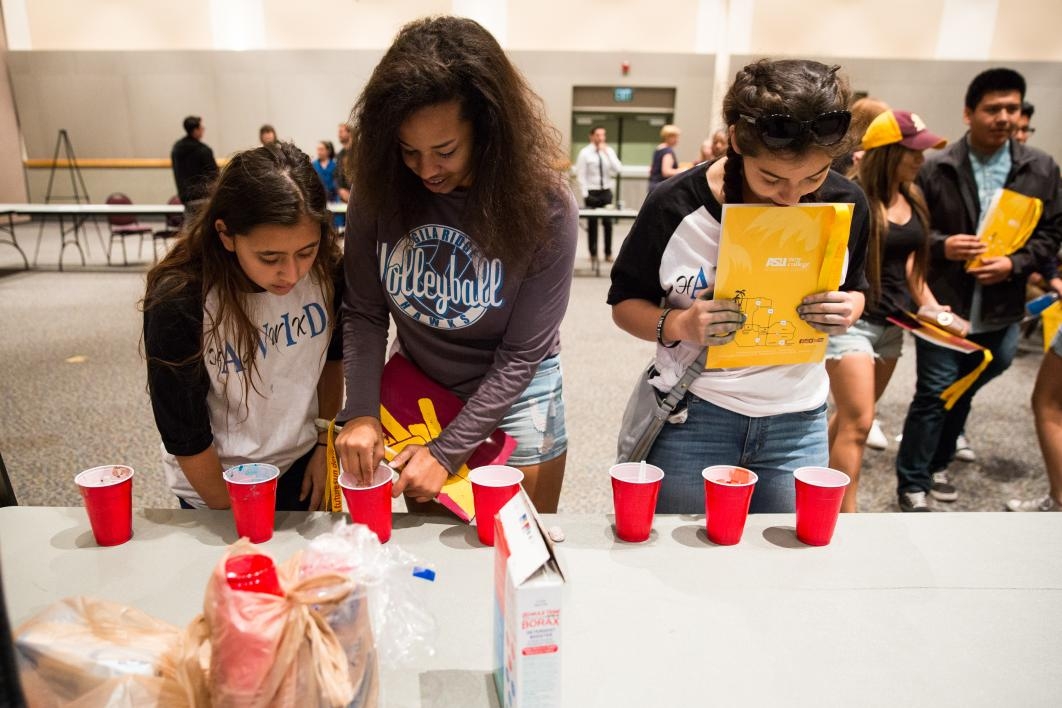 From left to right: Kat Hobbs, Eliana Fassio and Trinity Ballard, from Gila Ridge High School, watch their silly putty made from borax as part of a molding experiment during ASU Forensics Day. 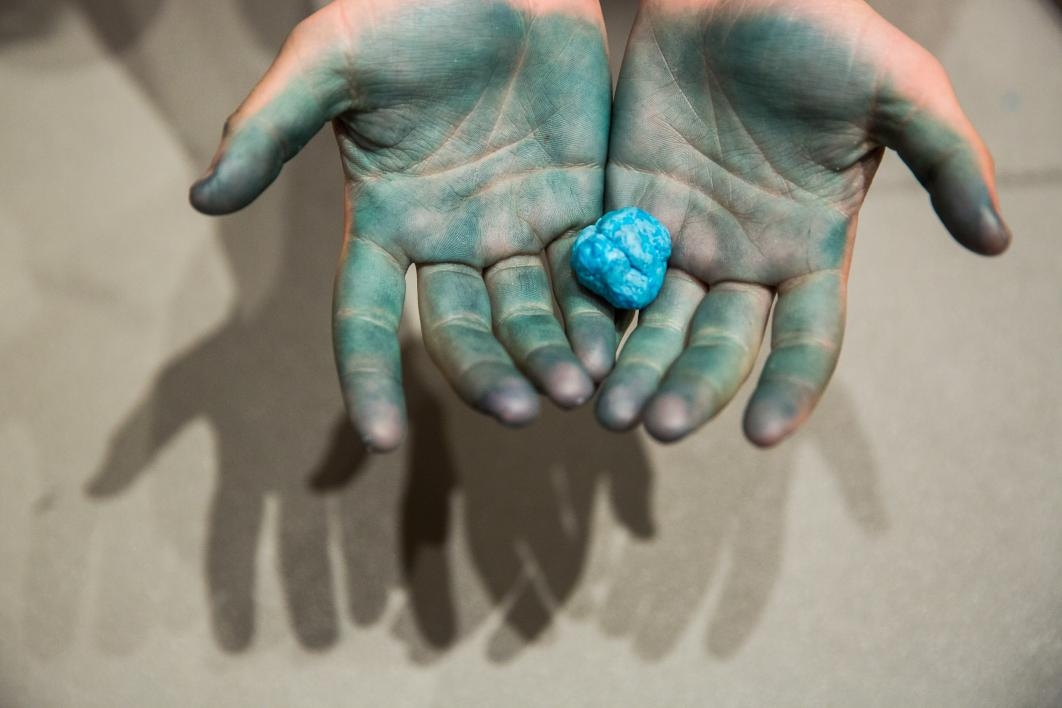 Ballard holds up her bouncy ball made from a borax mix to show molding techniques during ASU Forensics Day. 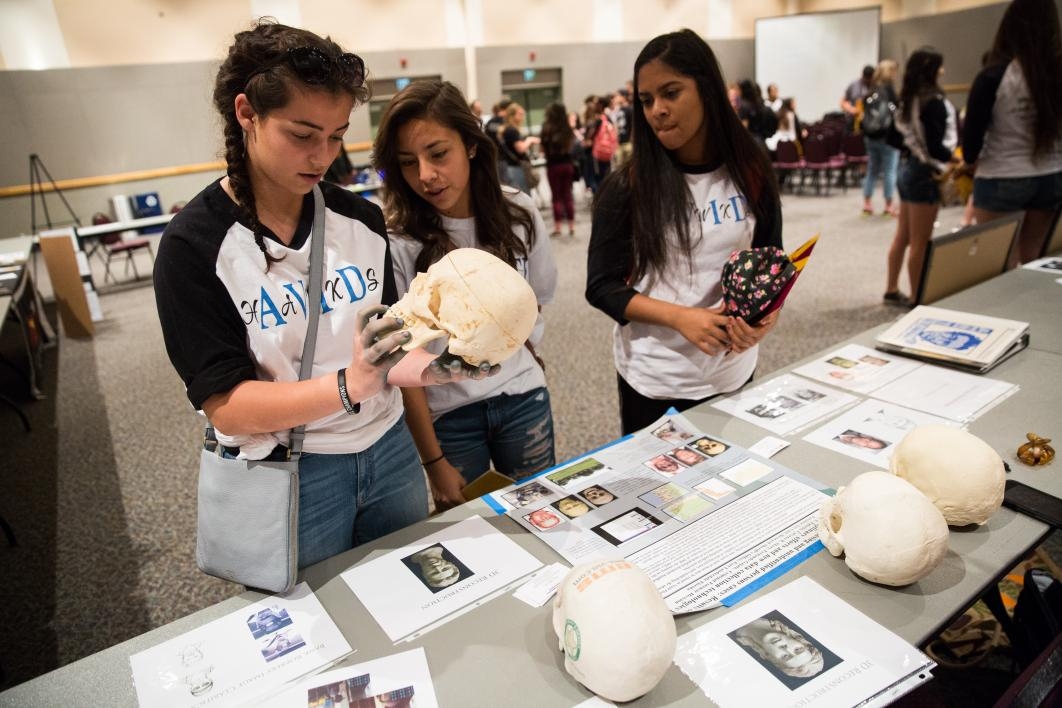 Ballard (left) and her friends hold a model skull during ASU Forensics Day. 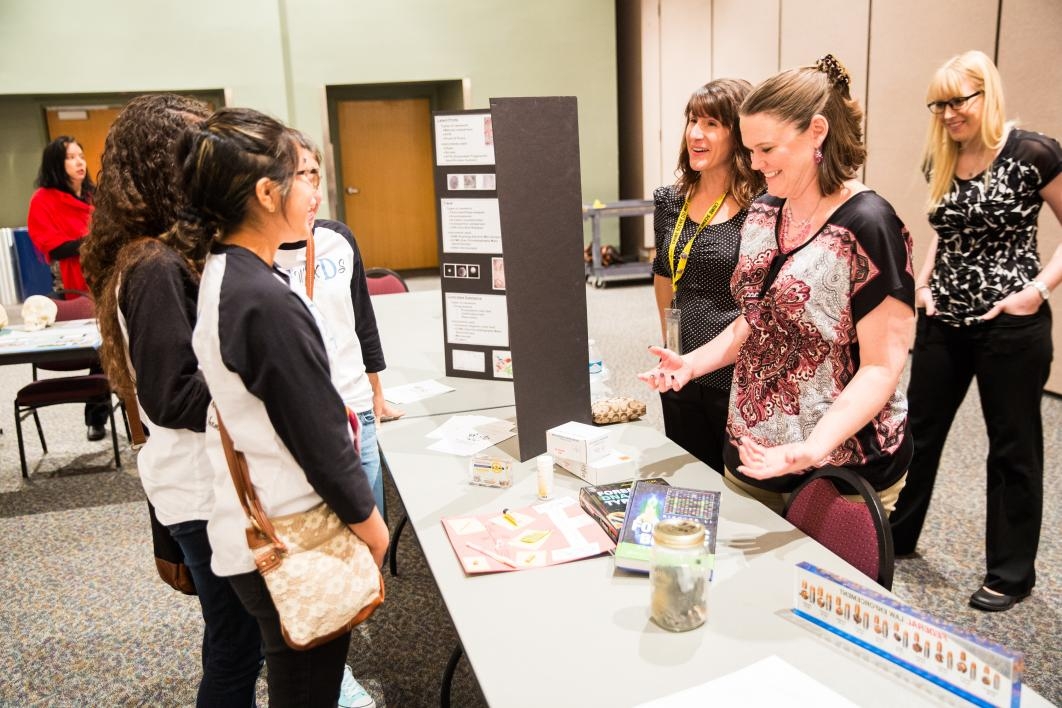 The Phoenix Police Department forensics department shows of the different tools of their work to interested students from Gila Ridge High School. High school students get a view of some of the crime scenes that are recreated using dummies and props, inside ASU's forensics lab.

Editor's note: This story is being highlighted in ASU Now's year in review. To read more top stories from 2015, click here.A bottle of Turnbull's scotch whisky sits next to an overturned bottle of pills on an end table. Next to the table, a man is seated in an armchair, a pillow covering his face.The scene is straight out of an episode of "CSI" — that is, until forensics professor Kimberly Koboj... 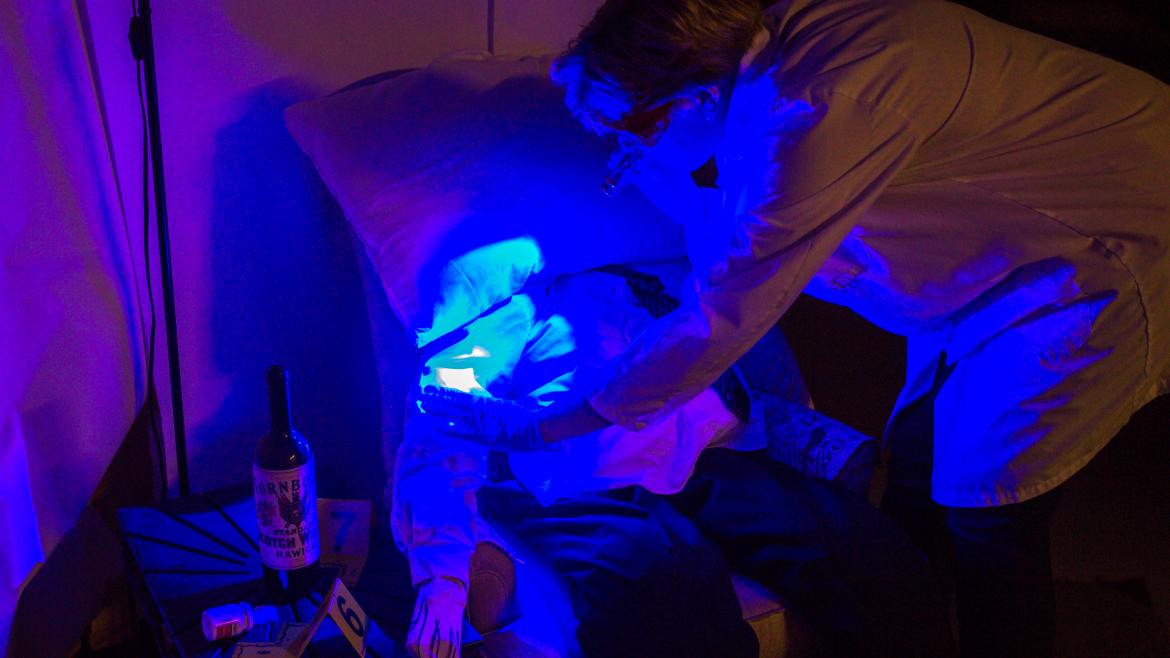 West campus
ASU's popular forensics program is notable for the dedication of its faculty.
ASU forensic science majors aren't limited to careers in crime labs.
Forensic science can bring swift justice and give a voice to victims.
November 16, 2015

A bottle of Turnbull's scotch whisky sits next to an overturned bottle of pills on an end table. Next to the table, a man is seated in an armchair, a pillow covering his face.

The scene is straight out of an episode of "CSI" — that is, until forensics professor Kimberly Kobojek lifts the pillow from the man’s face to reveal that it’s not a man at all, but a Styrofoam dummy head. The liquor and pills are props, too.

What makes the scene so convincing is not only the materials used — which include professional-grade crime-scene markers and ultraviolet light to fluoresce biological fluids — but also the care taken by Kobojek in constructing it.

Before becoming a clinical associate professor in the New College of Interdisciplinary Arts and Sciences on Arizona State University’s West campus, Kobojek worked for 17 years as a forensic scientist with the City of Phoenix Police Department Crime Laboratory.

At different times, she worked in the controlled-substances unit, the toxicology/blood-alcohol unit and the forensic biology unit. She even testified as an expert witness or was involved in a number of groundbreaking or high-profile criminal cases in Maricopa County, including the “Baseline Killer” case.

Though her father had been a police officer, Kobojek never intended to follow in his footsteps. As an undergrad at ASU, she majored in biology with the intent of becoming a teacher. That ambition fell temporarily by the wayside as her career with the Phoenix Police Department progressed, but reignited when she began leading forensic training sessions with police officers.

“That was when I rediscovered my passion for teaching,” Kobojek said.

She decided to go back to school to get her master’s in biology when a friend happened to mention an opportunity at ASU. There was a new program, her friend told her, and it needed a director. The subject matter, she said, was right up Kobojek’s alley.

“So I put in application,” she said. “And the more I researched ASU West … the more excited I became.

“After my on-campus interview, I was floored; I really wanted to be here. And then I was fortunate enough that they hired me.”

The official launch of the forensics program was the fall 2014 semester. Only available through New College on ASU’s West campus, the program offers a bachelor’s in forensics, as well as a bachelor’s degree in biology with a concentration in forensics.

“I think there’s a real national demand, both in terms of student interest and in terms of professional need,” said Marlene TrompTromp also serves as a professor of English and women and gender studies, and as vice provost of ASU's West campus., dean of New College, citing a national backlog in crime labs.

“And one of the great things about a forensics degree is that when you’re trained in forensic science, you’re taking biology, chemistry, mathematics and computing; so forensics is not your only option when you graduate, and those are the fastest-growing, most marketable areas in the economy. … So [students are] going to be able to do a lot of different things with that degree,” she said.

Students of forensic science are also qualified to work in private labs that do biological analyses, and they are well-prepared to continue on to law or medical school, according to Kobojek.

All of this attests to the inherently interdisciplinary nature of the degree, something New College is distinctly capable of nurturing.

“One of the exciting things President Crow did when he came to ASU is he said, ‘We really need to think across disciplinary lines more,’ ” Tromp said. “But New College was built that way from the very beginning. … We’ve never had traditional departments, so our faculty have always worked across those lines.”

Besides collaborating with scientists in other hard data-based fields, forensics majors also collaborate with bioethicists at West campus who are trained as philosophers. 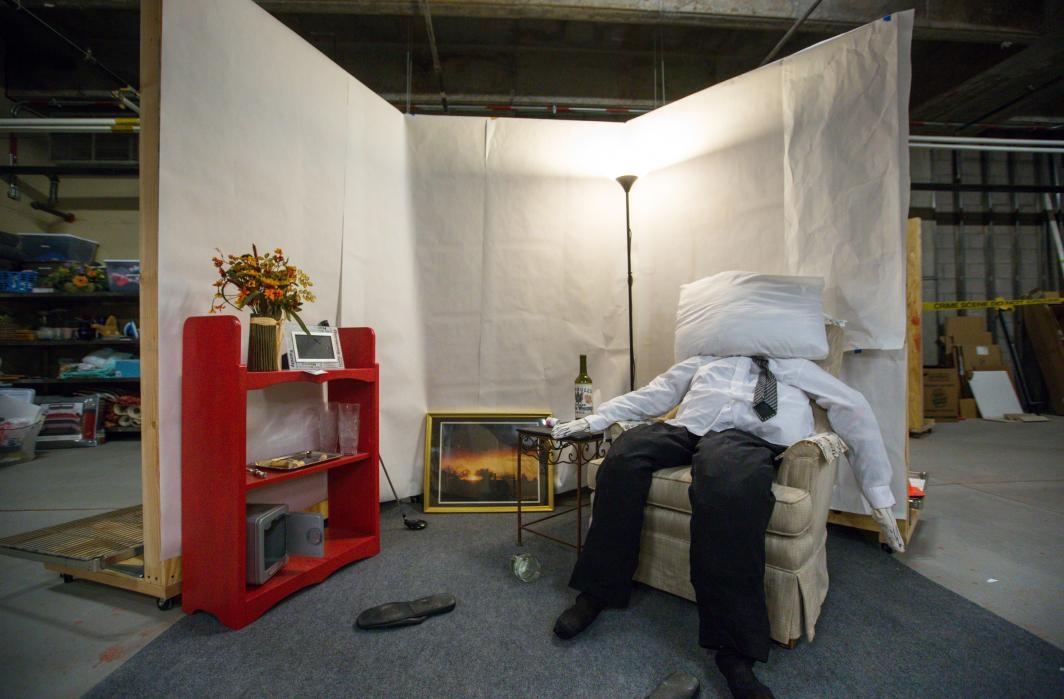 In this mock crime scene set up by ASU forensics professor Kimberly Kobojek, a man is seated in an armchair with a pillow covering his face. A bottle of liquor and an open bottle of pills sit on the table next to him. 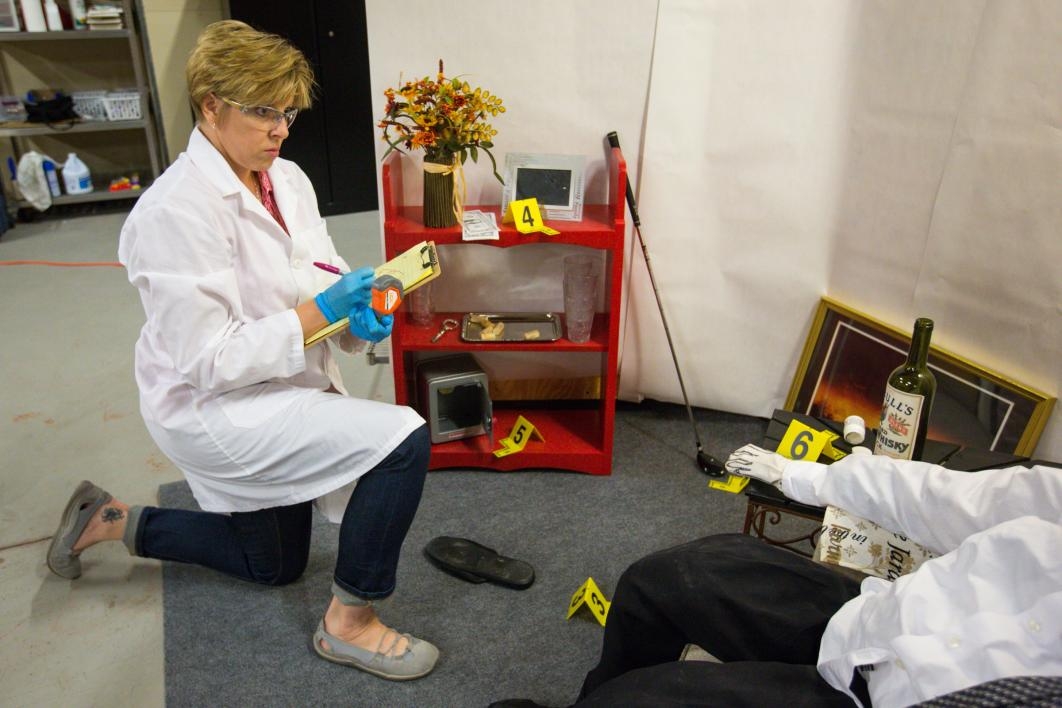 Kobojek, who worked as a forensic scientist with the City of Phoenix Police Department Crime Laboratory for 17 years, sets out yellow crime-scene evidence markers and takes notes about the position of the body in this mock crime scene at her lab on ASU's West campus. Using ultraviolet light, Kobojek checks for the presence of bodily fluids, which could provide key evidence in a case. 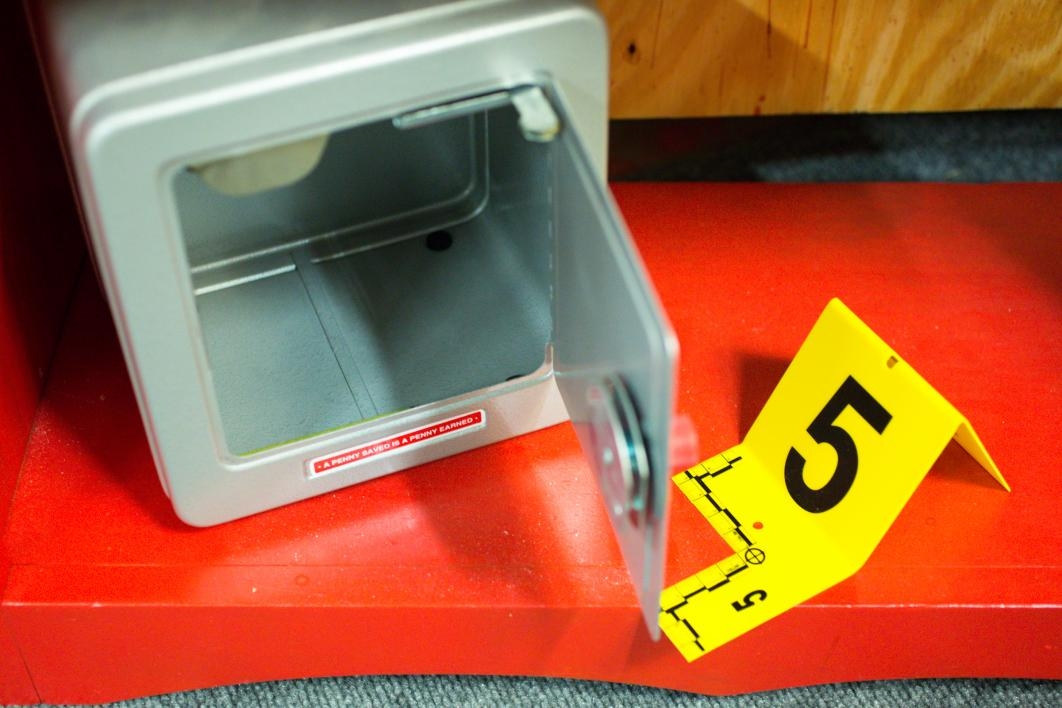 An open safe could be evidence of a burglary gone wrong. 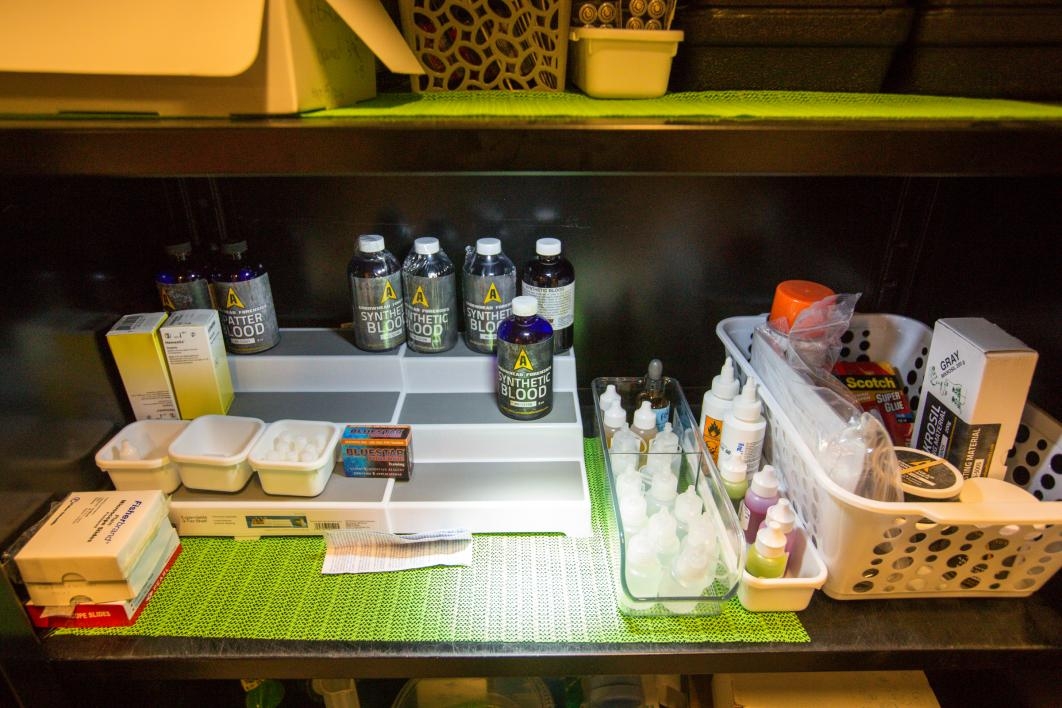 Kobojec's lab is equipped with a cabinet containing both synthetic blood and red liquid that spatters the same as blood, among other items used to reconstruct crime scenes. 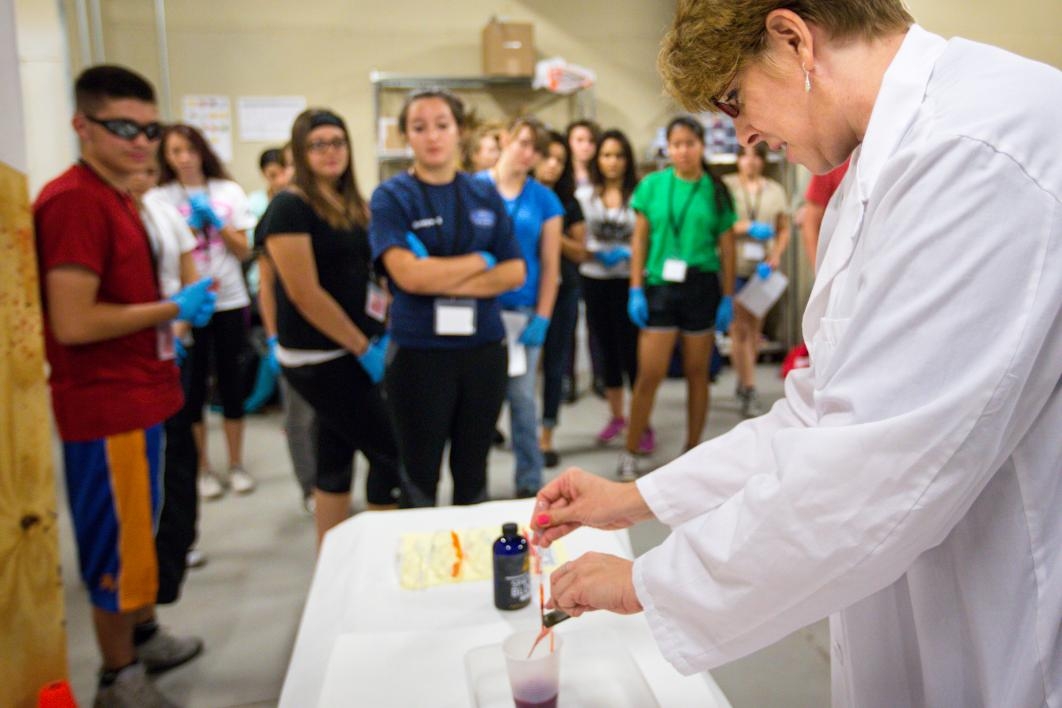 Professor Kobojek demonstrates to students at the ASU Summer CSI Experience how to apply fake blood to fake weapons ... ... and how to use the weapons to create blood-spatter patterns on makeshift plywood walls lined with white butcher paper. As a non-traditional student returning to college after 20 years in customer service, Robin Lane was looking to do just that. Originally interested in pharmacy school, he reconsidered after some deep thought.

“After starting my college career, I contemplated whether I really wanted to be a pharmacist. I wanted to serve people in ways that would make an impact on their lives,” he said.

A lifelong plant enthusiast, Lane decided to look into what career fields were available in botany. To his surprise — and delight — he discovered there is such a thing as forensic botany.

Forensic botanists can determine whether an individual was present at a crime scene based on things like the type of pollen found on their clothing.

Lane will graduate at the end of the 2015 semester with a bachelor’s in forensics. In his time with the program, he said he has been nothing short of “thoroughly impressed by the academic and personal support provided by each instructor.”

Upon graduation, he looks forward to working with local, state or government agencies in forensics, and “being the voice of victims that cannot speak.”

As for the future of the program itself, there are some innovative developments underway.

“One of the exciting things that we’re doing right now is we’re developing a training program for EULEXEULEX is a contract between the European Union and Kosovo that allows for certain states of the European Union to send police forces and lawyers to help make Kosovo more secure. to do additional training for their people who are in the field doing cadaver analysis in war crime zones,” said Tromp, adding that other programs like it with various international organizations are also in the works.

“So that’s huge global impact. We also are impacting the local community by training students in areas that are really marketable and that will help our students graduate and get great jobs and make an impact here in Arizona. And the more we do of this work, the more Arizona becomes a center for this kind of activity,” she said.

That fact excites Kobojek, who noted the recent uptick in students majoring in forensics.

“That not only means the program is accessible but students are choosing to come to ASU for forensics. To me that means we have set ourselves apart as a leader in forensics programs here in Arizona,” she said.

And she plans to take it even further.

“I do have grand plans,” Kobojek admitted demurely.

“I would love to be able to establish a forensic science training center on West campus, not just for ASU students but for the community to come in and learn about new things happening in areas of forensic science, as well as for collaborations with crime labs who need to get their people quality and affordable continuing education as mandated by lab standards.

“If we were to establish a training center here, people from the entire state of Arizona, as well as neighboring states, could come here for training. California has done this, and they have ongoing waiting lists for their courses.”

In the meantime, she’s happy to continue spattering the walls of mock crime scenes with synthetic blood in her basement lab in the CLCC BuildingThe Classroom/Lab/Computer Classroom Building on ASU’s West campus contains general-purpose and computer classrooms; science laboratories; studios for art, dance and music; and the University Technology Office..

“I love it when I meet students who are very excited about it, and who get it,” she said. “And every day is different, so there’s constant change. But I still get to do forensic science!”