Today, Arizona State University and McGraw-Hill Education announced the winners of the 2016 Harold W. McGraw, Jr. Prize in Education, which honors outstanding individuals who have dedicated themselves to improving education through innovative approaches.

Honorees receive an award of $50,000, in addition to what has become one of the most prestigious educational awards since its founding in 1988. 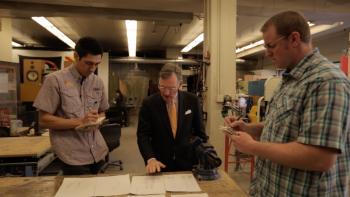 “ASU is proud to be a part of this partnership that honors outstanding innovators in education,” said ASU President Michael Crow. “From increasing access to education to incorporating technology in the classroom, this year’s winners have tacked some of the biggest challenges facing educators around the globe. Each of them provides an example of success from which we all can learn.”

Phil Regier, university dean for educational initiatives and CEO of ASU EdPlus, also noted that the new alliance for the prize was a perfect fit.

“ASU is at the forefront of educational innovation, and we both believe in the power of technology to increase access to education and enhance the learning experience. It’s a great partnership.”

ASU’s partnership doesn’t stop there. Two ASU students from the Herberger Institute for Design and the Arts, Miguel Cardona and Chase Young, worked directly with Terry McGraw, former chairman and CEO of McGraw Companies, to design this year’s physical award that the honorees will receive.

The Prize dinner and ceremony will be held at the ASU GSV Education Innovation Summit in San Diego on April 19, honoring the 2016 winners:

• Anant Agarwal, CEO of edX, will receive the U.S. Higher Education prize as an outstanding leader of the development of the Massive Open Online Course movement, which has helped make possible the education of millions of students around the world.

• Alberto M. Carvalho, superintendent of the Miami-Dade school district, will receive the U.S. K-12 prize for his exemplary leadership in raising standards and improving graduation rates in a complex urban district, which is an outstanding model for others.

• Sakena Yacoobi, CEO of the Afghan Institute of Learning, will receive theInternational Education prize for the transformational effect her work has had on communities in Afghanistan, particularly in education for girls and women, and how she has inspired others to follow suit.

“These three winners are extraordinary educational leaders who will inspire the next generation of learners around the world,” said Harold (Terry) McGraw III, former chairman and CEO of The McGraw-Hill Companies. “We are proud to have them join the other illustrious recipients of the McGraw Prize in Education.”

“Anant, Alberto, and Sakena have changed the lives of millions of students,” said David Levin, president and CEO of McGraw-Hill Education. “Their accomplishments and innovation should be lauded and shared with others who are working to make a difference around the world.”

Researchers at Arizona State University and Mayo Clinic in Arizona have launched a study that will explore ways of improving the fatigue factor that many breast cancer survivors experience after fighting and surviving breast cancer.   The Recovery and Rejuvenation Study may help participants raise energy levels, along with improving mental clarity, overall well-being and finding group support fr...

Researchers at Arizona State University and Mayo Clinic in Arizona have launched a study that will explore ways of improving the fatigue factor that many breast cancer survivors experience after fighting and surviving breast cancer.

One of the study’s lead investigators, says the research will focus on helping those who continue to deal with the after-effects of fighting breast cancer. “We find that so many breast cancer survivors continue to feel fatigued, depressed, and struggle with sleep and anxiety, even when way past the term of their treatment,” says Linda K. Larkey, a professor with ASU’s College of Nursing and Health Innovation.  “We are testing different ways—some movement-based, some social and educational-- that show promise for alleviating these persistent symptoms.”

The study is looking for women who have been diagnosed with stage zero to stage three breast cancer and who are six months to five years past primary treatment.  Enrollees must also be between the ages of 45 to 75 years old.

Phoenix’s Maricopa Integrated Health System will also be involved in the study which is funded by the National Cancer Institute, one of the National Institutes of Health.

To enroll in this study, eligible participants are asked to contact Elizabeth Rainy at Recovery.Rejuvenation@asu.edu or phone (602) 496-2329.   Please mention “Recovery & Rejuvenation” and your name and telephone number if leaving a message.  Interested individuals will be asked to take part in a pre-eligibility screen to see if they qualify to continue forward with enrollment.

Since 2002, Mayo and ASU have worked together on a variety of successful efforts, including a joint nursing education program, joint faculty appointments and numerous collaborative research project, along with curriculum development for the Mayo Medical School.