The journalism profession has undergone significant changes in recent years, but the critical job of reporters to search for truth and maintain credibility has not changed.

This was one of many topics discussed by expert panels in Mexico City on Feb. 26 as part of an Arizona State University initiative with and hosted by the Centro de Investigación y Docencia Económicas (CIDE) — a renowned Mexican research and higher-education institute. 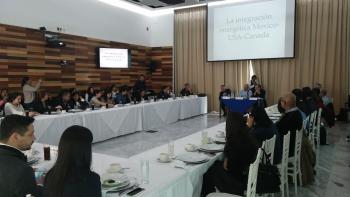 Led by ASU’s Walter Cronkite School of Journalism and Mass Communication and CIDE, the one-day conference titled “Training for the 21st-Century Journalist: A Transnational Conversation” provided more than 50 Mexican reporters, students and faculty the opportunity to hear from highly acclaimed journalists and other experts from both sides of the border.

“We are hopeful that this will be the first of many sessions in years to come with CIDE,” said Kevin Galvin, vice president of ASU’s Office of Media Relations and Strategic Communications. “This is a great opportunity for us to showcase the excellence of our Walter Cronkite School of Journalism and our specialties in economics, technology and sustainability.”

The bilingual panels delved into such reporting themes as media narratives, photojournalism, and the challenges faced by Mexican reporters as they struggle to report on corruption and drug cartel violence. But one high-interest topic was today’s technological landscape and the social-media impact.

At the end of the day it all boils down to the basics, said Jose “Pepe” Cohen, a producer with Cactus Productions and former ABC News Mexico bureau chief.

“With all of today’s technological opportunities, we cannot forget the basics of journalism, which is the right that citizens have to be informed so they can freely elect their leaders,” said Cohen. “It’s a basic principle.”

The right of free citizens to obtain information has been complicated by social media, which has opened “windows” for everyone to promote information on the Internet, said Cohen. This has devalued journalism and has created a society where spectators consume information 140 characters at a time.

“That is the struggle today, to stay informed objectively and not believe everything you read on social media,” he said. “Because it is not all journalism.”

Cohen believes 95 percent of news content promoted on social media lacks double-source reporting or only presents one side of the story.

Panelists also talked about the complexities of the U.S.-Mexico relationship, economic opportunities along the border and how the border shapes the tie between the two nations.

“There is an old joke that Mexico and the U.S. aren’t friends, they’re brothers,” said Hector Moreira Rodriguez, former cabinet member under Mexican President Vicente Fox and conference energy-panel moderator. “You can choose your friends, but you can’t choose your brothers. We (in Mexico) are fated to have a close relationship with the U.S., and in particular when it comes to energy.”

Moreira spoke of the drop in U.S. demand for Mexican oil. But a paradigm shift is occurring when it comes to another resource — natural gas. The largest natural-gas reserves in the world are in Russia and North America. Mexico, the U.S. and Canada all have “enormous” gas deposits, he said. A symbiotic relationship is developing as Mexico saves its reserves and purchases U.S. natural gas piped from Texas. Protecting those pipelines on the Mexico side becomes paramount as the nation’s dependence on the resource increases, and journalists will have a vital role of keeping the public informed of events impacting these initiatives.

In addition to the energy relationship created by the close border ties, other intricacies exist such as understanding the people who reside in the “borderlands.”

“It’s another dimension,” he said.

Corchado previously worked on a journalistic project where it was discovered that 65 percent of the Americans who guard the U.S. border are Hispanics with Mexican immigrant roots — an example of the type of knowledge that can be uncovered through journalism and provide a deeper understanding of the border.

The border also continues to be an area of dynamic economic opportunity, a fact highlighted by ASU’s W. P. Carey School of Business Seidman Research Institute. Researchers Timothy James and Anthony Evans gave a presentation on the USMexPAT web-based analysis tool that quantifies the economic and social impacts of U.S.-Mexico policy initiatives at local, regional and transnational level.

Conference attendees had the opportunity to question panel members and contribute to the in-depth conversations about the challenges and opportunities of modern journalism. Many found the dialogue professionally useful.

“I think this (conference) is an important tool for those of us who are journalists,” said Vianey Pichardo, an economy and finance reporter with Mexico’s Capital Media group. “Our perspectives change completely once we join the labor force and start working in this profession.”

Reporting is important work, and it is key to identify future trends, said Pichardo.

Some saw the conference as an important step toward other opportunities for Mexican journalists and students.

“This is useful, but there are still pending opportunities to capitalize on these major collaborations with U.S. academia, such as with Arizona State University and its excellent programs,” said Octavio Cervantes, a business and economics reporter with Mexico City’s El Semanario newspaper. “There continues to be interest by the federal government and academic institutions in Mexico to permit us, as professionals or students, access to these different programs through scholarships. It continues to be something to explore.”

During the conference, ASU officials also expressed interest in continuing to expand ties with Mexico and believe the university is postured to do so.

“Arizona State University in Phoenix is a very young school and very innovative,” said Andres Martinez, special adviser to the ASU president and one of the panel moderators. “U.S. News and World Report chose us in their most recent ranking as the most innovative school in the U.S., and that’s partly because we work a lot in alliances and partnerships, with a vision to amplify access to education without sacrificing excellence.”

Martinez said ASU has an innovation advantage over older schools that are entrenched in the old ways of doing business.

“This is our first step,” she said.

This is how you get kids to eat veggies

Update: The Wall Street Journal included ASU research in its Feb. 24, 2017, article, “How Schools Can Get Children to Eat Their Vegetables.”What’s the best way to get school kids to eat their fruits and veggies? Well, a team of ASU health researchers discovered it’s all about where you place the salad bar.“Past studies looked at whether students attending schools with salads ate more f... 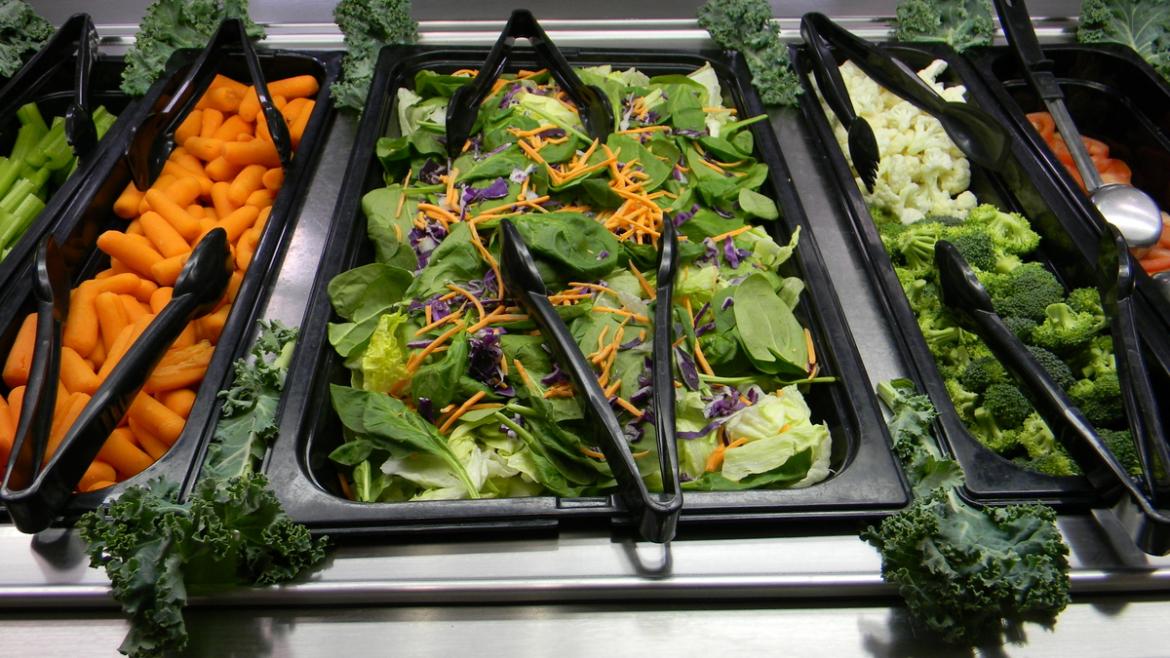 This is how you get kids to eat veggies

Update: The Wall Street Journal included ASU research in its Feb. 24, 2017, article, “How Schools Can Get Children to Eat Their Vegetables.”

What’s the best way to get school kids to eat their fruits and veggies? Well, a team of ASU health researchers discovered it’s all about where you place the salad bar.

“Past studies looked at whether students attending schools with salads ate more fruits and vegetables at lunch compared to schools without them,” said Marc A. Adams, an assistant professor at ASU’s School of Nutrition and Health PromotionThe School of Nutrition and Health Promotion is in the College of Health Solutions.. “Our study examined a different question: Once salad bars are implemented at schools, what is the best location for them in the cafeteria?”

The main find revealed that students consumed almost five times the amount of fruits and vegetables when salad bars were placed inside the cafeteria line prior to point of purchase compared with salad bars displayed outside the serving line. Adams believes a number of factors come into play with that finding, but mostly it’s a case of out of sight, out of mind.

“We were surprised, not that there was a difference in amounts of fruits and vegetables consumed, but by the size of the difference that placement had on students’ choices,” Adams said.

The study, called “Location of School Lunch Salad Bars and Fruit and Vegetable Consumption in Middle Schools: A Cross-Sectional Plate Waste Study,” was a cross-sectional comparative study conducted across two school districts, both in the greater Phoenix region, and included six middle schools. It examined consumption among 533 students randomly sampled on a single day from each school and looked at fruit and vegetable consumption and waste by the placement of the salad bar. The study was funded by a $50,000 grant by the Virginia G. Piper Charitable Trust, which allowed Adams, along with Meg Bruening, Punam Ohri-Vachspati and Jane C. Hurley, to look at the behavioral economics behind students' food take, consumption and plate-waste methodology.

Another paper, written by ASU investigators Ohri-Vachaspati, Adams and Bruening, in collaboration with Bridging the Gap researchers at the University of Illinois at Chicago, "School Resources and Engagement in Technical Assistance Programs Is Associated with Higher Prevalence of Salad Bars in Elementary School Lunches in the United States," examined school-level resources and programs that are related to salad bar implementation in a national sample of close to 4,000 elementary schools. This work, funded by the Robert Wood Johnson Foundation, found that the prevalence of salad bars in elementary schools has increased more than 50 percent over the course of five years and that schools were more likely to have salad bars if they also had other nutrition programming such as a farm to school program or participated in fresh fruit and vegetable snack program.

But the big takeaway is that the placement of the salad bar is so crucial to consumption of fruits and vegetables.

“Behavioral economics suggest that children’s choices are not rational and that simple modifications to school cafeterias can have meaningful impact on improving students’ dietary modifications,” Adams said. “Once students exit the serving line, most will not seek out additional opportunities to take fruits and vegetables because it might mean breaking away from friends or navigating busy cafeterias with short lunch periods. Placement is one of those simple modifications that can help nudge students to make the best choices to improve their fruit and vegetable intake without asking them or telling them to do so.”

But in some cases, it’s easier said than done. Enforcement of where a salad bar goes is not so easy to do, and for older schools in dense urban areas this placement may not always be possible because of limitations on space.

“We are not necessarily suggesting that schools reconfigure or realign their cafeterias, but one thing we would say is that if new schools are being built or if kitchens are being redesigned, they may want to consider putting those salad bars in those lines,” said Bruening, an assistant professor in the School of Health and Nutrition. “Placement of salad bars matter, and if there’s a way to promote them, then they should.”