Arizona State University students at the Walter Cronkite School of Journalism and Mass Communication collected more awards in news categories in the Broadcast Education Association’s Festival of Media Arts competition than any other school in the country.

Cronkite students won 12 awards, one more than the combined total of the second- and third-place schools in news, sports and documentary divisions. The win marks the sixth time in seven years that the Cronkite School has finished with the most news division awards. In all, Cronkite students have won 118 awards at the Festival of Media Arts in the past seven years, more than any school in the country.

This year, Cronkite students took home three first-place awards, one third-place and eight honorable mentions in a variety of broadcast categories, including television and radio reporting as well as documentaries. Winners were selected from a pool of more than 1,500 entries, representing more than 175 colleges and universities.

“This year’s award-winning work is a testament to the dedication of our amazing students and outstanding faculty,” said Cronkite Assistant Dean Mark Lodato. “Whether it was news and sports or television and radio, our students produced high-quality broadcast journalism that made an impact.”

The winners will be honored at the BEA’s annual convention in Las Vegas in April.

Established in 1955, the BEA is a global professional association for professors, industry professionals and graduate students who are interested in teaching and research related to electronic media and multimedia enterprises.

Legacy of a guitar legend

Popular music has produced some towering figures over the years, from Elvis Presley to Beyoncé, the Beatles and the Rolling Stones, to name a few. But when you gauge the entire history of pop music, Les Paul might be more important than all of them.We’re talking about the man, not the guitar.Yes, the Les Paul-designed guitar — with its iconic curves and smooth, full sound — has become an in... 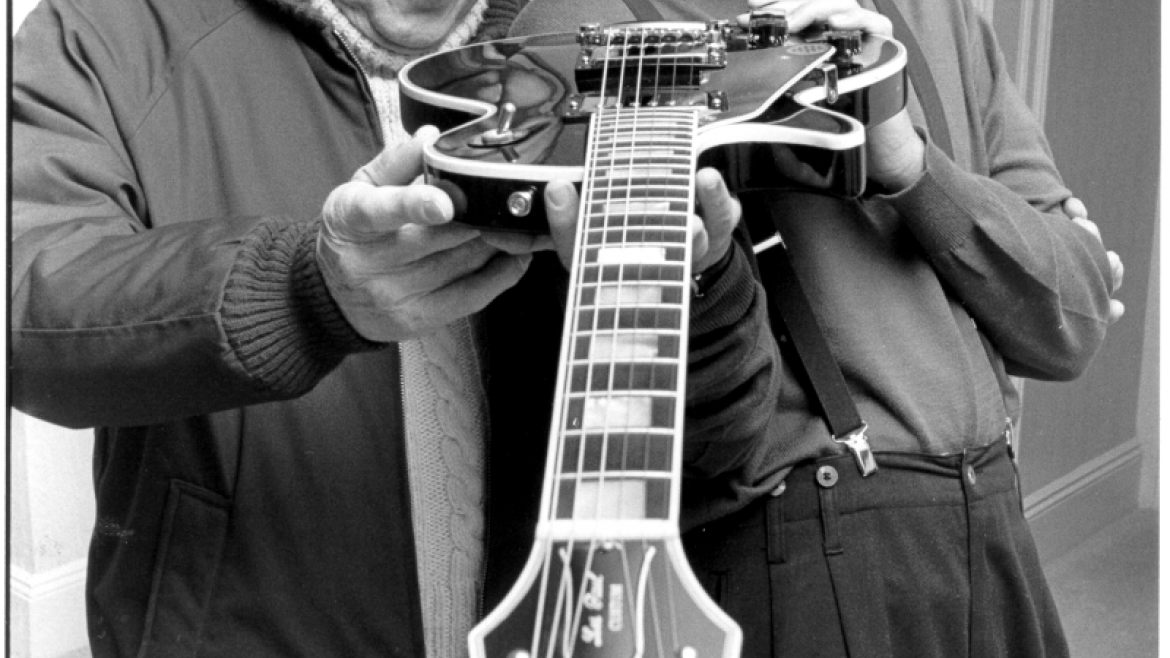 Popular music has produced some towering figures over the years, from Elvis Presley to Beyoncé, the Beatles and the Rolling Stones, to name a few. But when you gauge the entire history of pop music, Les Paul might be more important than all of them.

We’re talking about the man, not the guitar.

Yes, the Les Paul-designed guitar — with its iconic curves and smooth, full sound — has become an industry standard, played by everyone from Jimmy Page of Led Zeppelin to guitar god Eric Clapton. But the man behind the guitar is just as worthy of adulation as an accomplished jazz and country guitarist, television personality, the facilitator of guitar-oriented rock and, perhaps his most noteworthy exploit, the inventor of multi-track recording.

Not bad for a kid from Wisconsin.

ASU’s School of MusicASU's School of Music is part of the Herberger Institute for Design and the Arts. and the Les Paul Foundation are sharing his creativity, innovative spirit and love of sound in an intriguing, free mobile experience Friday, Feb. 26, at the Tempe campus, continuing a tour that began last summer in honor of what would have been the icon’s 100th birthday.

“A lot of people outside of music don’t know who Les Paul is or they just say, ‘Oh yeah, he’s that guitar guy,’ ” said Jeff Salmon, a trustee with the Les Paul Foundation who was also a longtime friend of the legend.

“We knew we had to do something to honor his contributions to music and technology, and preserve his legacy. So we decided to bring this to the people in a way that promotes creative and innovative thinking.”

“Les Paul’s Big Sound Experience” will be open from 10 to 11:30 a.m. Friday adjacent to the Sun Devil Fitness Complex. It will also be on campus later that day from 6 to 11:30 p.m. as part of Devilpalooza, which will feature a free Hunter Hayes concert later that night on ASU's Sun Devil Fitness Center East Field. 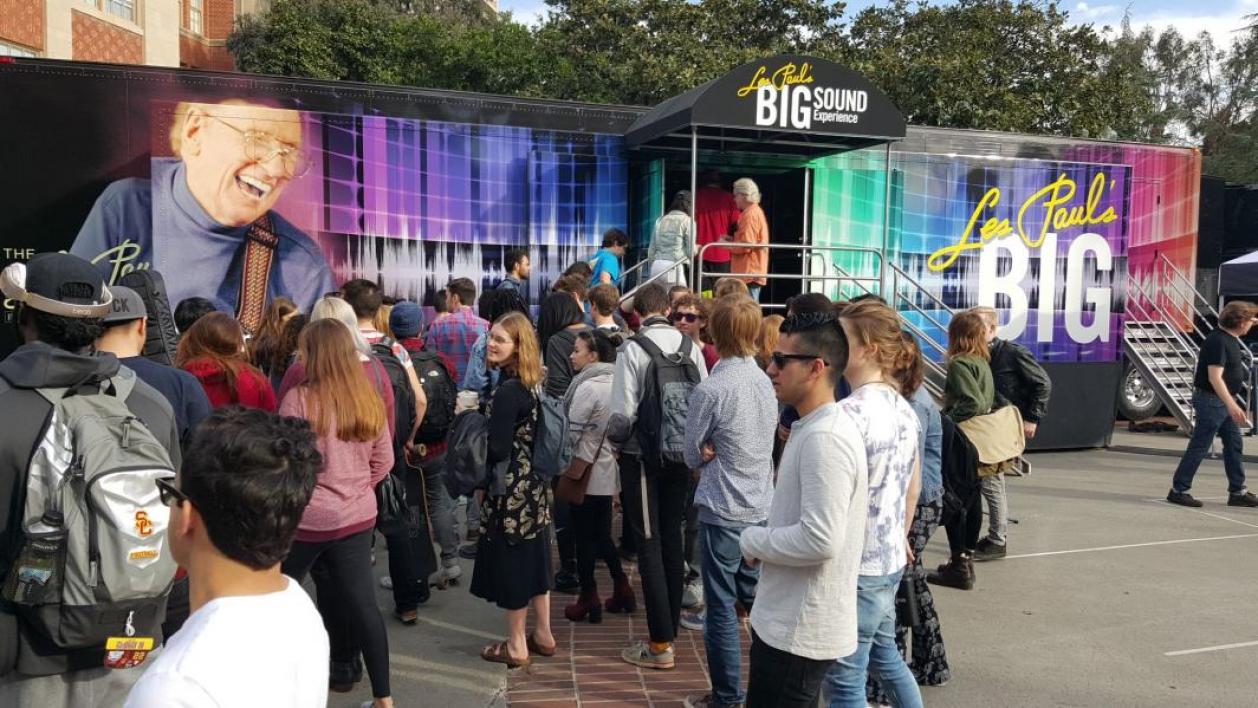 People wait to enter the mobile “Les Paul’s Big Sound Experience” exhibit. The exhibit honors the late guitarist and inventor. It will be on the Tempe campus Friday, Feb. 26. 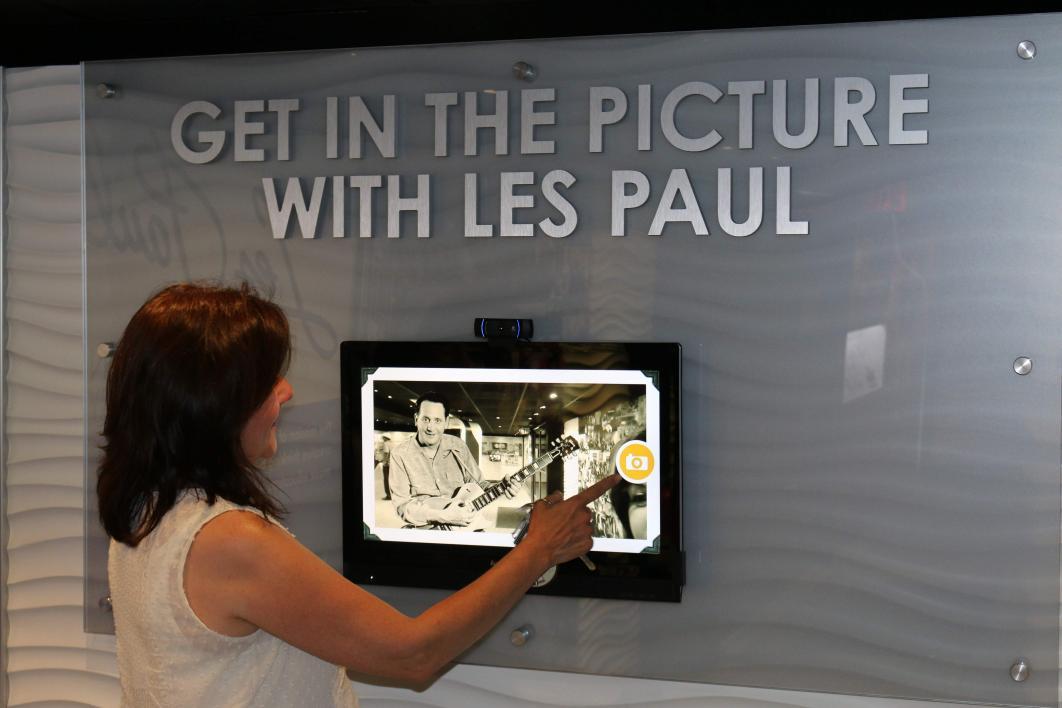 In the “Les Paul’s Big Sound Experience” exhibit, patrons can "take a picture" with the iconic guitarist. 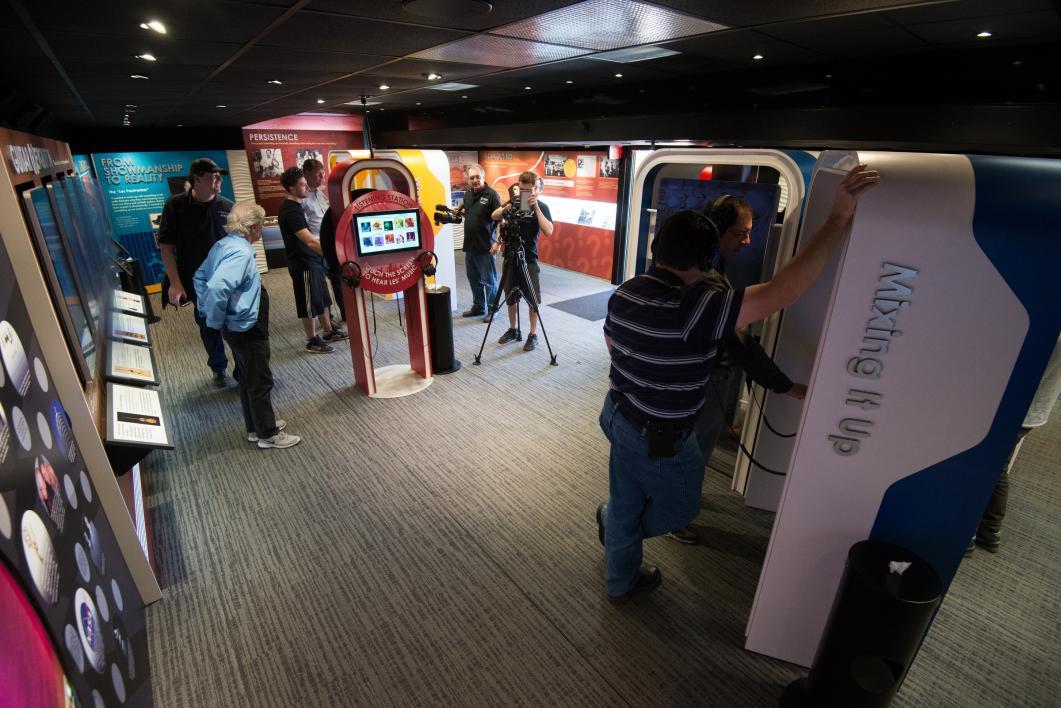 People visit an exhibit featuring guitarist and inventor Les Paul on Friday, Feb. 26, on the Sun Devil Fitness Center fields at ASU's Tempe campus. The exhibit highlighted Paul's revolutionary work in the music industry, including the invention of multi-track recording and the modern electric guitar. 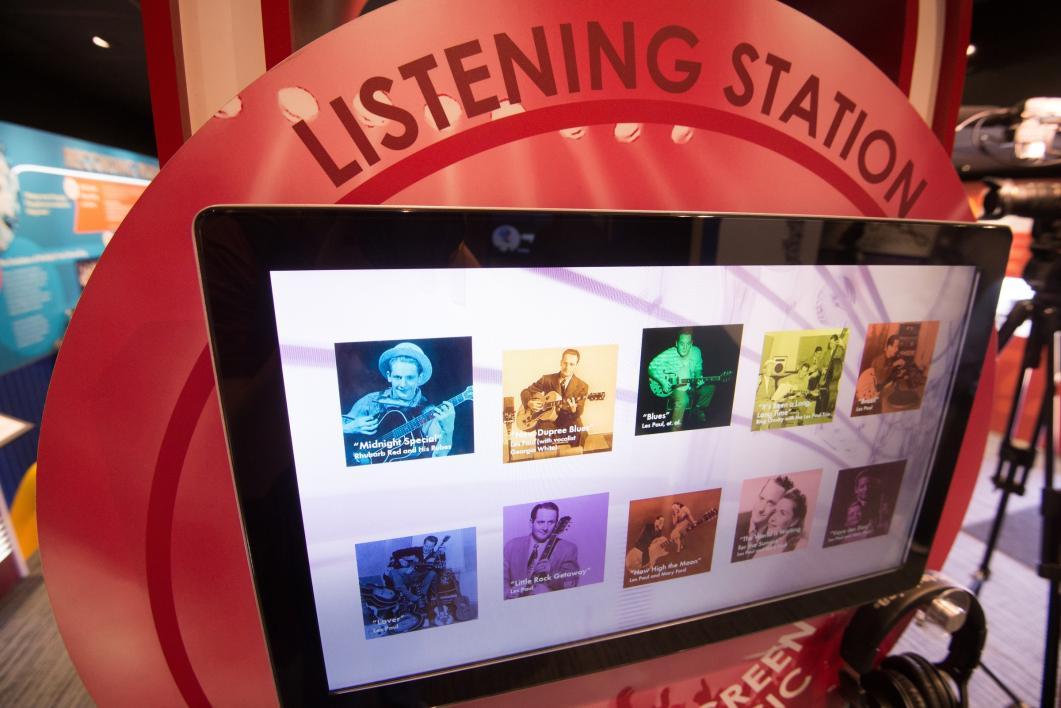 The interior of the exhibit featured a listening station for guests to enjoy. 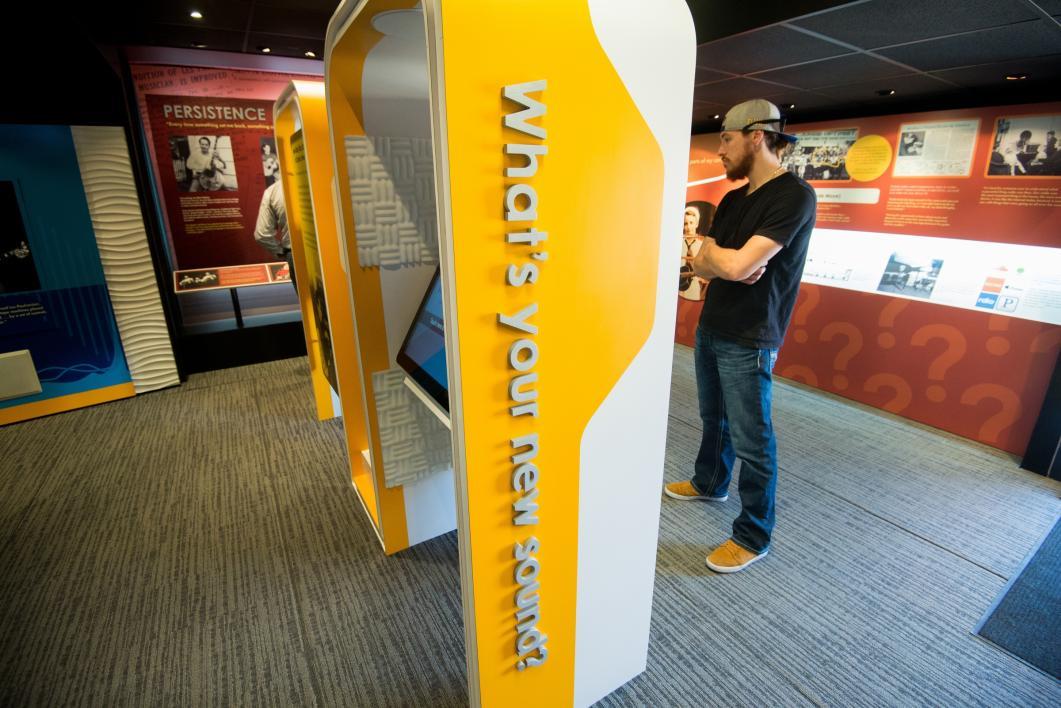 Mike Camarillo, a student from the Conservatory of the Recording Arts and Sciences, interacts with displays at the exhibit. Students from the conservatory visited the exhibit as part of a field trip. 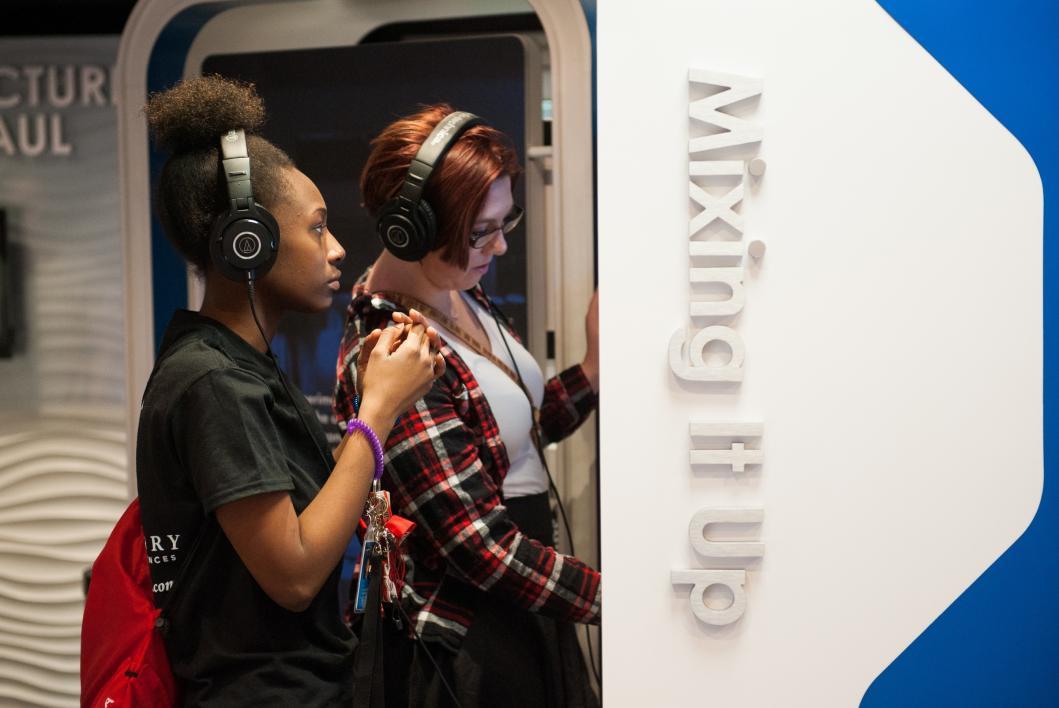 Conservatory of the Recording Arts and Sciences students Ariel Floyd (left) and Brittany Pigg interact with displays at the Les Paul exhibit. 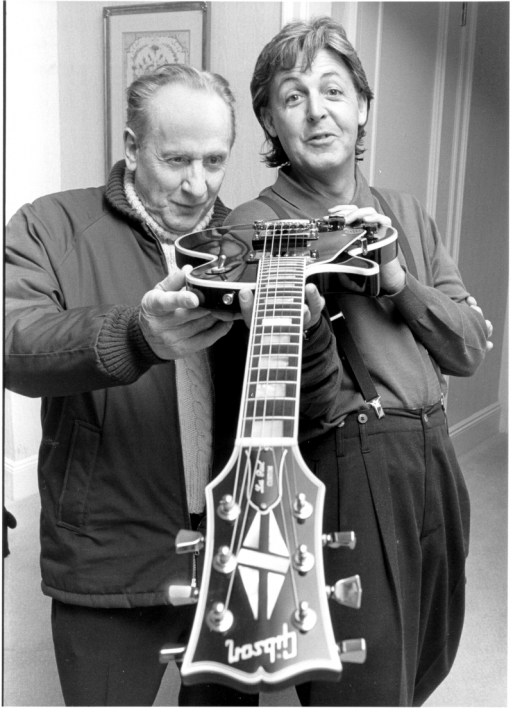 This photo of Les Paul and Paul McCartney shows Paul's obsession with his work — even next to a former Beatle, Paul seems more focused on inspecting the condition of one of his signature guitars than mugging with a musical legend. 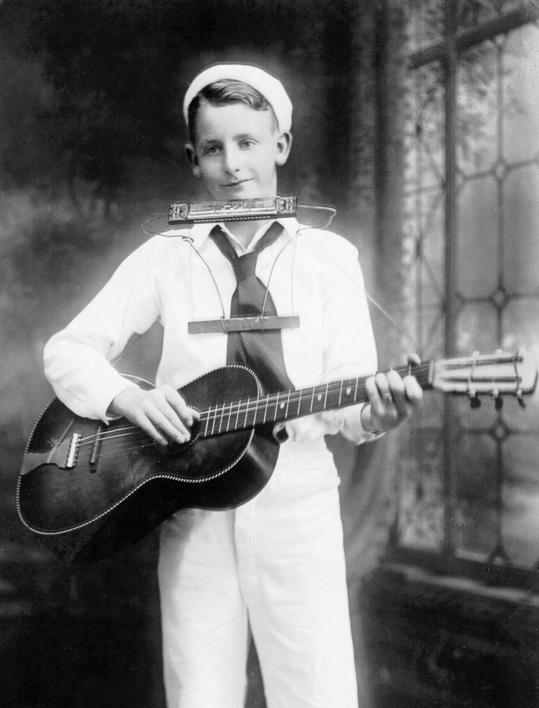 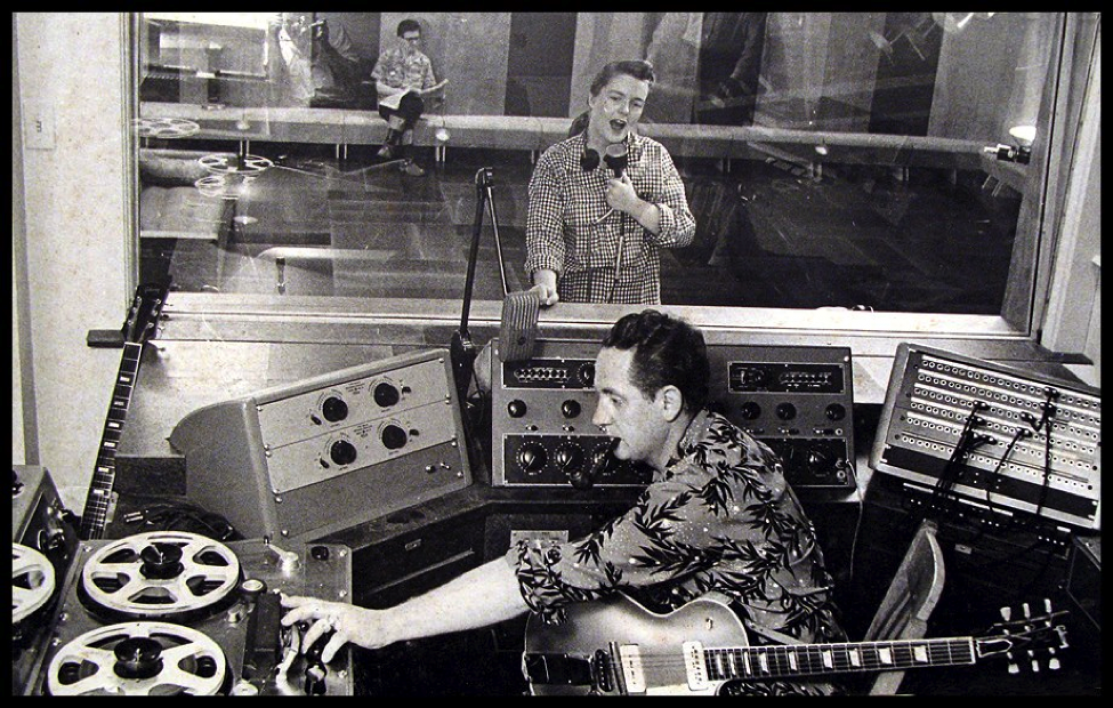 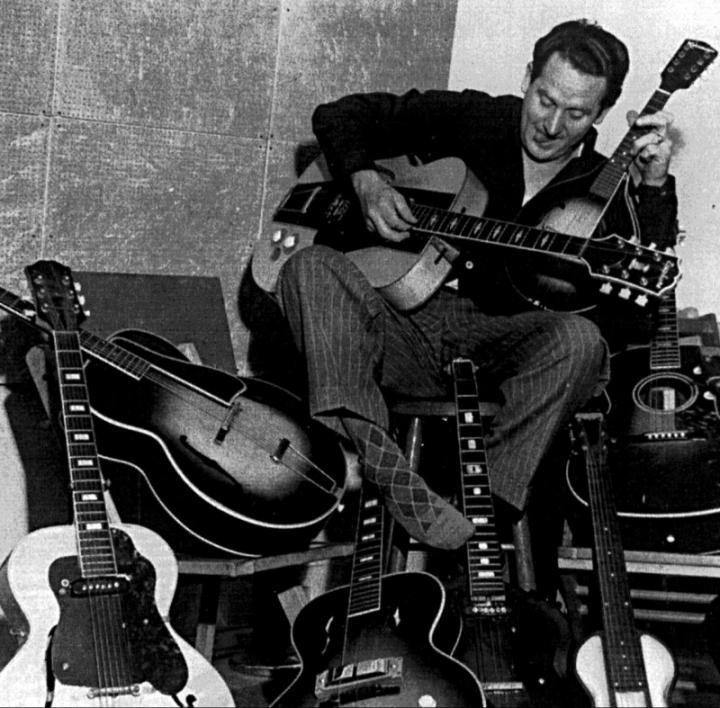 Les Paul and a pile of guitars. It looks as though he's testing the tones of the guitars, but he might just be having a good time.

The attraction is 1,000 square feet of entertaining, inspiring and innovative interactive digital experiences. Through several double-sided listening stations, 3-D animations and graphic displays, attendees can learn about the personal story of Les Paul (pictured above with Paul McCartney) and his never-ending search for a unique musical sound through decades of experimentation. Users can marvel at his performing techniques, mix and share music and even get their picture taken with the legend.

“Les Paul is an important figure in the history of the guitar, and this is a great opportunity for students to learn more about this man and what he contributed to music,” said Frank Koonce, a professor of music in ASU’s School of Music. “My students are mostly classical guitarists, but most of them have a background in electric guitar playing and still do play styles other than classical. I think we should embrace Les Paul, know he’s part of our heritage and see what a remarkable man he was.”

Koonce saw Paul play about a decade ago at the Iridium, a famed New York City nightclub, when the icon was in his 80s.

“I was amazed by how good he was at that point in his life,” Koonce said. “He was still a very fine player.”

Lester William Polsfuss — who later adopted Les Paul as his stage name — amazed a lot of people during his lifetime, which started in 1915. As a young boy, he taught himself the harmonica, piano, banjo and guitar. A few years later he invented musical devices such as a neck-worn harmonica holder, which was made out of a coat hanger; constructed from scratch an amplifier for his guitar; and eventually, the first solid-body guitar, often credited for making the sound of rock ’n’ roll even possible.

As a musician, Paul first made his foray into country music in the Midwest and later developed an interest in jazz-pop. He moved to New York in the mid-1930s, where he formed the Les Paul Trio and recorded with such luminaries as Nat King Cole, Rudy Vallee and Kate Smith.

In 1941 Paul sought to improve upon the common amplified guitar by his constant tinkering and perfectionist tendencies. The result was the first solid-body electric guitar, on which he continued to make refinements for the next decade.

Beyond his licks, trills, chording sequences and fretting techniques, Paul is credited with revolutionizing many recording and technical innovations including his pioneering use of overdubbing, multi-tracking, audio effects and speeding up the sound on his guitar on recordings with his wife, Mary Ford, with whom he scored a long string of hits, including a pair of No. 1 songs, “How High the Moon” (1951) and “Vaya Con Dios” (1953).

In that same decade, Paul introduced the first eight-track recorder and the “Gold-Top” solid-body electric guitar that bears his name. Gibson’s Les Paul Standard went on to become one of the most popular electric guitars of all time and made disciples out of Clapton, Page, Steve Miller, Jeff Beck, Duane Allman and Eddie Van Halen.

Grammy artist Laurence Juber, who was lead guitarist for Paul McCartney’s Wings, said he bought a 1957 Gold-Top at Manny’s Music in New York City in January 1980.

“This model was one of the first to be fitted with ‘humbuckingA humbucking pickup is a type of electric guitar pickup that uses two coils to "buck the hum" (or cancel out the interference) picked up by coil pickups. — Wikipedia’ pickups and, while not being as coveted as the sunburst Les Pauls of the era, it was a desirable instrument,” Juber said. “It was more money than I had ever paid for a guitar, but I knew that it would be a good investment, not to mention a killer ‘axe.’ ”

Today Juber’s guitar is estimated to be worth in the area of six figures.

Others invested in Paul’s judgment of sound.

Jimi Hendrix consulted Paul on the construction of Electric Lady Studios, as did Capitol Studios, where Paul designed a series of eight trapezoidal echo chambers with 10-inch-thick concrete walls dug 30 feet deep below the mythical Capitol Records Tower building in Los Angeles. It was the favorite studio of Frank Sinatra, Dean Martin and Nat King Cole, and where Juber played on hundreds of recording sessions and recorded five albums, including his latest, an untitled holiday album set for release later this year.

“Every studio has its unique echo chambers,” Juber said. “Those at Capitol are particularly fine-sounding thanks to Les Paul’s keen ear and are a significant factor in the tone of many classic recordings.”

He is the only person to be included in the Rock and Roll Hall of Fame and the National Inventors Hall of Fame. In 2005, at the age of 90, he recorded his final album, “American Made, World Played.” It featured Keith Richards, Sting, Jeff Beck and Eric Clapton, and garnered Paul two Grammy awards.

At the end of his life, Paul continued tinkering in his basement in Mahwah, New Jersey, working on making improvements to hearing aids, according to Salmon.

“He may have been losing his hearing later in life, but certainly not his spirit because Les kept plugging away,” Salmon said. “He was Mr. Curiosity and often scratched his head when people called him a genius.”

Paul died Aug. 12, 2009, at the age of 94 from complications associated with pneumonia.

Jeff Libman, an instructor of jazz studies at ASU’s School of Music, says an exhibit of this nature at the college’s doorstep is a gift.

“To have this exhibit, which is devoted to an extraordinary musical life, and have it brought to this school where each guitar player can experience this, that’s an incredible opportunity,” Libman said.

But not nearly as incredible as the man himself.