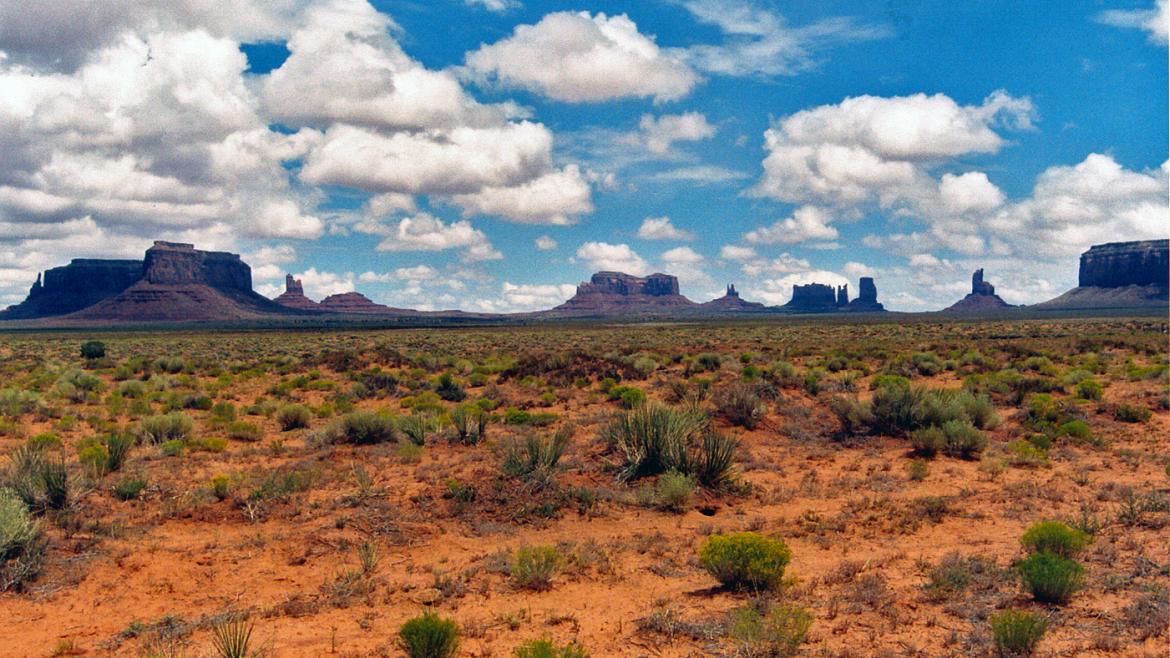 The question of renewable energy on tribal lands

Understanding the culture is key to effecting energy change.
Connection to land and to tradition can alter Navajos' view of energy plans.
February 23, 2016

Low adoption rate in Navajo Nation due to cultural and societal differences, according to ASU professor's study

The Navajo Nation has one of the most valuable mineral resources among any Native American reservation in the United States, according to the Bureau of Indian Affairs.

Add renewable-energy sources to that: winds scudding across mesas and sunlight baking the high deserts on the 27,000-square-mile reservation.

Yet thousands live without power or water, in a place where 43 percent fall below the poverty line and unemployment stands at 42 percent, according to the Navajo Nation Division of Economic Development.

A recent study spearheaded by an Arizona State University professor asked that question.

Cultural and societal differences are a huge part of the answer, according to “A Paradox of Plenty: Renewable Energy on Navajo Nation Lands,” published late last month in the journal Society and Natural Resources.

“There are 220,000 Navajo clustered in a few places like Kayenta, and then they’re just scattered all over the place, often without power or water,” said Martin Pasqualetti, lead author of the study and professor in the School of Geographical Sciences and Urban Planning in the College of Liberal Arts and Sciences. “They have coal, but the whole place is bathed in sunlight, just like we are here. Why is it there’s so much poverty, unemployment, low education rates, and alcoholism on the reservation when they have one of the best natural resources in the world right there? What is the answer to that question? We started to answer that.”

Pasqualetti has a catchphrase he likes that sums up the problem: “Energy is a social issue with a technical component, rather than the other way around.”

“It’s not good enough to say ‘This is a good idea,’ ” he said. “You can fail, and one reason you can fail is you didn’t pay enough attention to the societal aspects of the problem.”

Understanding the culture is key, said Pasqualetti, who is also a senior sustainability scientist in the Julie Ann Wrigley Global Institute of Sustainability. 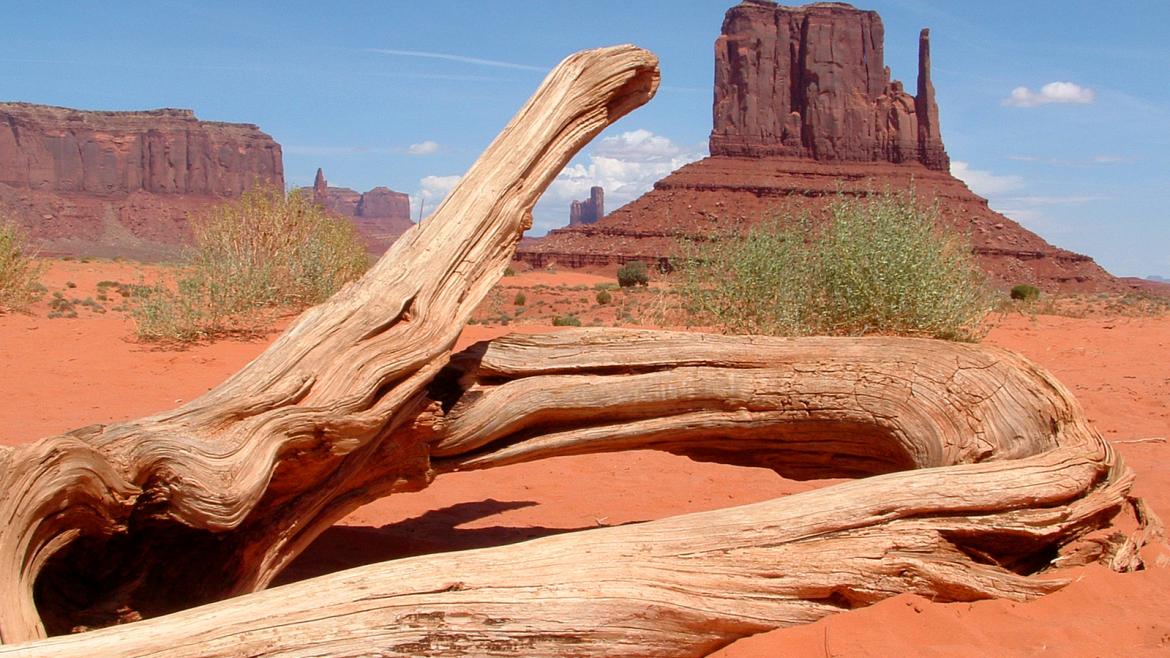 Making energy plans for the
Navajo Nation's future is
complicated by what has
happened in the past.

“You can’t just parachute all this renewable stuff in there and say, ‘There you go,’ ” he said. “That’s true in every culture, not just the Navajo.”

Victor Begay, academic community liaison director of the Division of Educational Leadership and Innovation at ASU, is from the Shiprock area of the Navajo Nation in New Mexico. He said most of the challenges the study talked about fall under the umbrella of colonization. To Native people, colonization is yet another white man showing up with yet another thing to “improve” their lives.

“That’s what makes it so complex, because of everything that happened in the past. It influences what people think today, which a lot of times non-Native communities don’t understand. They think, ‘I’m here just for the betterment of the tribe.’ Well, 20 years ago some corporation said the same thing, so pardon me if I don’t really believe what you’re saying.”

Distrust among the Navajo has deep roots, ranging from Spanish friars waving crosses hundreds of years ago to uranium mining in the 1950s, which caused cancer in thousands of Navajo miners who were not told of the hazards. Billboards still dot the reservation urging sick former miners to apply for benefits.

“We’re going to clear out your aquifers, but we’re not going to tell you that,” Begay said. “We’re going pay you $50 a ton of uranium ore. All of those things just make you weary of interactions. ... It’s this mentality that has been so deeply ingrained in Native communities that even though there’s a certain degree of independence, autonomy, sovereignty, it’s hard for Native communities to see outside of that. I think a lot of it has to do with that.”

While renewable energy isn’t dirty, doesn’t pollute and exists in abundance, those aspects don’t necessarily mean the Navajo are going to jump on it, Pasqualetti said. He cited the Hopi — who live in the middle of the Navajo reservation — refusing a wind farm because it would have been located on a spiritual site. The Hopi also refused to renew a coal mining lease because water use was drawing down springs and seeps they had used for centuries.

“The energy company just didn’t get it,” Pasqualetti said.

Some communities on the Navajo reservation don’t have electricity or running water. While a non-Native might say that’s terrible in 2016, the people in those communities don’t necessarily want it, Begay said.

An elderly woman living alone with her dogs and sheep out in the desert could potentially get a generator and solar panels, but with those things comes an electric bill, and a checking account to pay that electric bill. Those are things she has gotten along without her whole life, and she just doesn’t want any of the hassles. She’s doing fine.

“It’s that: ‘I’m doing fine,’ ” Begay said. “Those kinds of things might be needed if you live in town, but for out in a remote canyon, I’m doing all right. It’s all culturally based. It makes sense to that area. If you’re not from that area, it’s hard to understand, which I think the paper spoke to.”

Begay has seen cellphone-tower proposals get shot down because the site would have been on an area where a local family has grazed sheep for hundreds of years.

While there may be a nearly universal distrust of non-Natives, there is not universal agreement on many things within the tribe, which did not have a central government until the 20th century and was traditionally a loose confederation of semi-nomadic clans. Navajo government has executive, legislative and judicial branches, but the nation is divided into 110 chapters that have enormous say over what happens locally.

“You find out they don’t do it because individuals may understand it, but it doesn’t mean you can’t do it without substantial consultation with all the people,” Pasqualetti said. “It’s not just the Navajo as a body of people, it’s the Navajo intratribal too. It’s one chapter to another.”

Imagine a chapter with solar power that has radios, lights at night, cellphone chargers and so on, Pasqualetti said. The chapter beside them doesn’t have any of that. They ask, “Why do you have it and we don’t?”

“Well, you made it so difficult that we put it over here where people wanted it,” Pasqualetti said. “Now you have even worse conditions. You have to look at it from an anthropological or ethnographic entry point.”

“Energy is a social issue with a technical component, rather than the other way around. ... One reason you can fail is you didn’t pay enough attention to the societal aspects of the problem.”
— Martin Pasqualetti, professor in ASU's School of Geographical Sciences and Urban Planning

Begay said the Navajo Nation is very locally based. From chapters down to the family level, they will sharply look at a proposed project, who’s approaching them, and the level of community support.

“The local governing units, families, chapters have a lot of say in what happens because of these historical ownership of lands,” he said.

Ownership doesn’t necessarily translate to holding a deed. People who have lived in a certain spot for centuries will have more sway than a legal landowner, for example.

“A lot of times these projects don’t get off the ground because of these cultural and social rights to the land,” Begay said. “If a community at a chapter house wants to create a partnership or engage in wind farms or whatnot, everybody has to agree. It has to be a hundred percent unanimous vote.”

Reticence to adopt renewable energy doesn’t completely fall at the feet of outside influences, Begay added.

“It seems that when Native communities take on projects on our own, it still seems like we approach these projects from a colonized perspective,” he said. “We might define success on non-Navajo measures. We may take the program planning based on non-Navajo criteria. Even though we have total control over a project, we still think like non-Natives. That’s a colonization component of all the things we do.”

Technology is not the problem, Pasqualetti said. Because the Navajo will make the jump to renewables without an overbearing existing energy infrastructure or the legacy cost of building transmission lines, they will lead the way in adoption.

“Talk to them first,” he said. “The Navajo and other tribes will be showing us the wave of the future, but you have to deal with the people who are there. … It’s an enormous opportunity to open the door to energy futures.”

There are absolutely challenges in the differing worldviews, Begay said,

Students in China are eager to learn about American culture, and Arizona State University is part of a project designed to meet that need.This week, 21 professors from 10 Chinese universities are visiting the ASU campus, where they will work with faculty here to develop American studies curriculum.The American Experience Initiative began a few years ago, when ASU received a $750,000 grant from the... 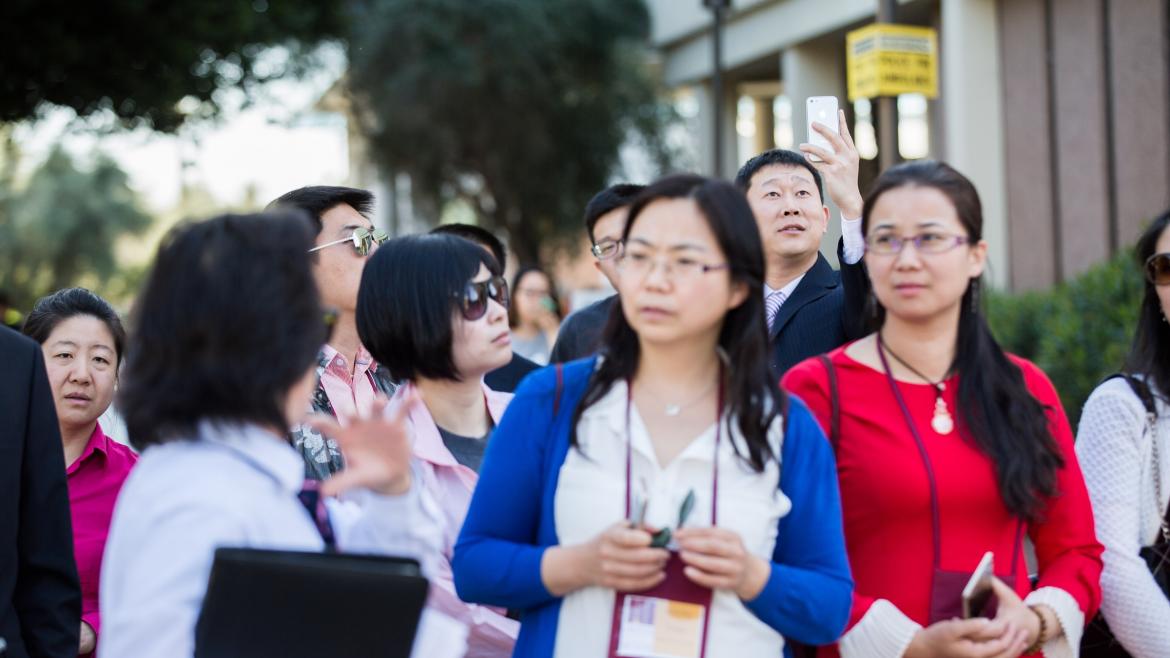 Students in China are eager to learn about American culture, and Arizona State University is part of a project designed to meet that need.

The American Experience Initiative began a few years ago, when ASU received a $750,000 grant from the Luce FoundationHenry R. Luce, co-founder and editor-in-chief of Time Inc., established the Luce Foundation in 1936 to honor the work of his parents, who were missionary educators in China. to create a collaborative project for cross-cultural education.

The Chinese professors are attending workshops at ASU to produce the course modules, which will be taught in China both in person and online.

Eric WertheimerWertheimer also is a professor of English and American studies and faculty director of ASU’s Digital Humanities Initiative., associate dean of graduate initiatives, is the primary investigator for the grant, saw firsthand the thirst for all things American in China.

“When I was in China last summer, my class in American poetry had a significant plurality of students who were studying hydrology,” he said, explaining that the hydrology students just wanted a taste of the American experience.

“There’s an intense interest in understanding American cultural life, and being able to gain fluency in that is an advantage.”

To see all parts of American culture, the Chinese contingent will visit the Heard Museum, eat Mexican food and attend a Phoenix Suns basketball game during their visit.

The Chinese team also will tour Hayden Library and have access to ASU’s archives.

“The library is an extremely important component to all this," Werthheimer said. "They’ll have the ability to access materials that would be very hard for them to access in China.” 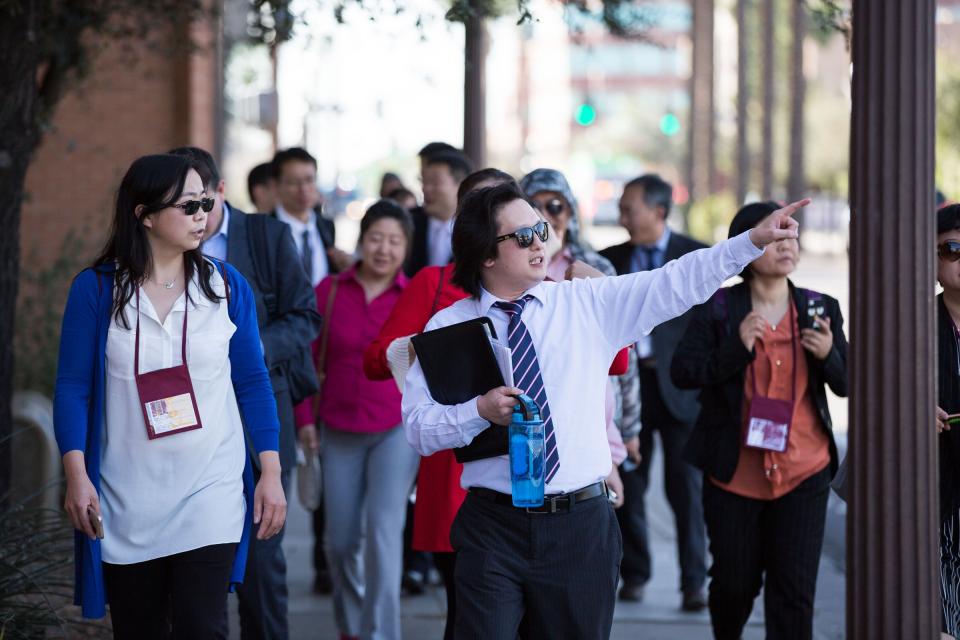 Wertheimer said that ASU is an ideal partner for the initiative.

“ASU has a nice overlap with the mission of the Luce Foundation, which is to reduce the obstacles between students and education,” he said.

The course content varies. Wertheimer is working with one of the universities on a course in presidential speeches. Another module explores American influence in China. The class will incorporate different genres, such as news reports and literary works, and different formats, such as books, photos, music and documentary film.

“We’re interested in sharing the cultural and social lessons of American life and the problems and the promise,” he said.