Today, the Peace Corps announced that Arizona State University ranked No. 22 among large schools on the agency’s 2016 Top Volunteer-Producing Colleges and Universities list. There are 33 Sun Devil alumni currently volunteering worldwide. This year, ASU leads all Arizona schools in producing the most Peace Corps volunteers.

Such dedication to service is not unusual for ASU students and alumni. ASU is also a top producer of Teach for America volunteers, was the first university to become an Employer of National Service, and founded a first-of-its-kind Public Service Academy for undergraduates looking to use their university education for public good. 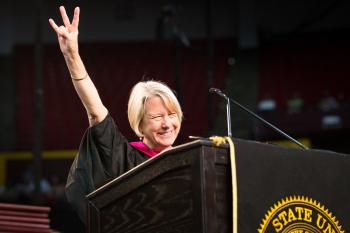 Peace Corps Director Carrie Hessler-Radelet flashes the pitchfork at the College of Liberal Arts and Sciences convocation May 12, 2015, in Tempe, where she delivered the keynote address. Photo by Charlie Leight/ASU Now Download Full Image

“The Peace Corps is a unique opportunity for college graduates to put their education into practice and become agents of change in communities around the world,” Peace Corps Director Carrie Hessler-Radelet said. “Today’s graduates understand the importance of intercultural understanding and are raising their hands in record numbers to take on the challenge of international service."

Since the Peace Corps’ founding in 1961, 1,017 alumni from ASU have served, and the university has ranked in the top 25 undergraduate schools for four consecutive years. Sun Devil alumni also hold the No. 36 spot overall for all-time highest volunteer-producing schools.

“Peace Corps volunteers are capacity builders,” said Caressa Kruth, ASU alumna serving in Nicaragua. “We are constantly training the trainers; whether they are youth, community members or professionals, our role is to strengthen the community leaders’ knowledge, skills and abilities, so they can do their work even better. In this way, our work is extremely sustainable.”

For students interested in more information about the Peace Corps, ASU is hosting a number of activities and events across all campus locations from Feb. 22-28. Peace Corps Week commemorates President John F. Kennedy’s establishment of the Peace Corps on March 1, 1961, and the Peace Corps community at ASU hosts Peace & Pizza talks, photo exhibitions, and other events to inform and engage about how the Peace Corps makes a difference.

Affirming inclusion as the ASU way

Arizona State University is working to defeat the deep-rooted idea that higher education is an exclusive enterprise, a privilege set for only a segment of the population.And the university is working to empower the current generation of students to carry out that mission, according to ASU President Michael Crow.“Our entire education system is built around the notion of exclusivity, scarcity, hie... Affirming inclusion as the ASU way

Arizona State University is working to defeat the deep-rooted idea that higher education is an exclusive enterprise, a privilege set for only a segment of the population.

And the university is working to empower the current generation of students to carry out that mission, according to ASU President Michael Crow.

“Our entire education system is built around the notion of exclusivity, scarcity, hierarchy and social status,” Crow said during a panel discussion titled “Creating Success by Whom We Include,” sponsored by the Faculty Women of Color Caucus at the Marston Exploration Theater on Thursday, Feb. 18.

“If you want inclusion to work, you must defeat that.”

He also said that for current students — whom he described as “late Millennials” — easy access to technology has made their world more egalitarian.

“Our students have unbelievably high expectations for the environment when they come to the university,” he said. “They assume it will be inclusive. They believe our society should be inclusive.” 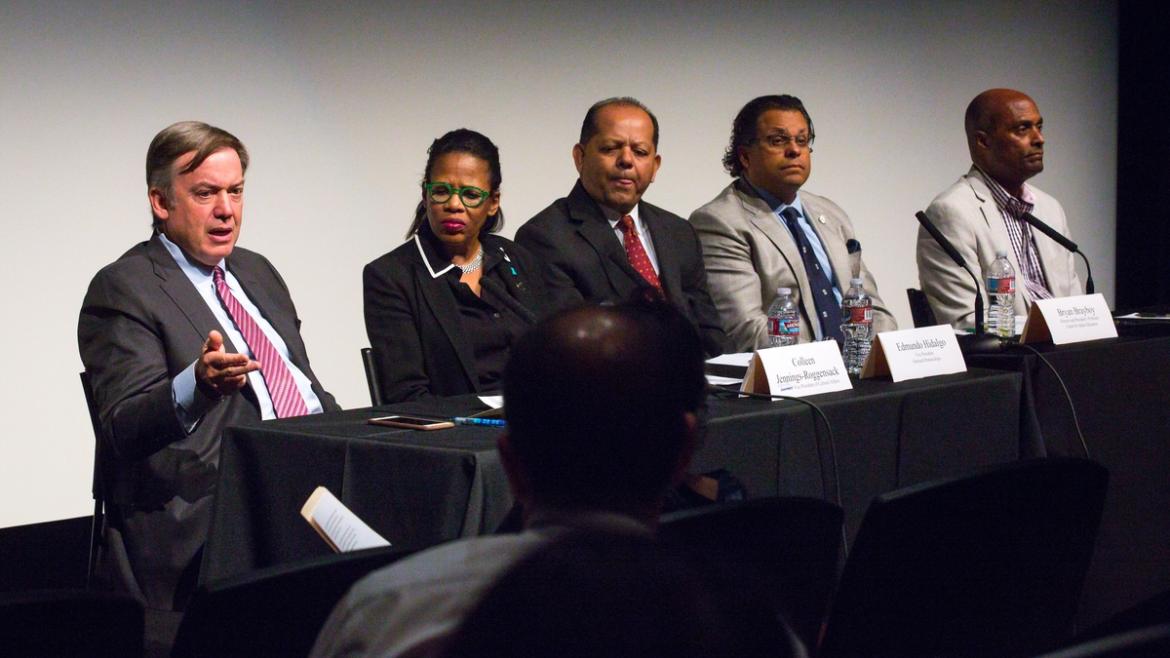 The panelists said that ASU’s work toward becoming more inclusive of all types of people is ongoing.

Crow noted that in 1991, only 3 percent of ASU’s students came from families eligible to receive the federal Pell Grant financial aid. In 2002, it was about 10 percent, and now it’s about 40 percent.

He said that ASU’s approach has been to alter its culture, which is not easy.

“Would you be rejected by this institution as a leader or faculty member if you didn’t believe in this inclusion? The answer now is yes,” he said.

“Diversity means ‘not me,’ while ‘inclusion’ means everyone,” she said.

At Gammage, the staff has collaborated with communities in Arizona to express their cultures.

“We worked with the Latino community, and they wanted a chance to share their culture defined from the beginning of time to today, and reflective of class structure,” she said. “There are 14 Asian communities, and we’ve worked with 29 First Nation communities.”

“We need to recognize that students come to us with millennia worth of knowledge. What we do is help them to envision and enact their own futures.”
— Bryan Brayboy, special adviser to President Crow on Indian initiatives

Ray Anderson, vice president for university athletics, said that his background in the private sector — including the National Football League — proved that inclusion is simply good business.

And that concept translates from the business world to ASU.

“We are trying to recruit and sell young men and women and their parents on what we are here,” Anderson said. “There is a higher comfort level when they know there are folks who look like them. We have women and we have brown-skinned folks.”

Edmundo Hildago, vice president for outreach partnerships for ASU, said the university must be willing to have difficult conversations about inclusion.

"We have to bring those conversations forward and not pass the buck when the opportunities present themselves," he said.

Bryan Brayboy, special adviser to Crow on Indian initiatives, noted that ASU is built on the ancestral lands of Native Americans.

“We need to recognize that students come to us with millennia worth of knowledge. What we do is help them to envision and enact their own futures,” he said.