Since 2008 the ASU Campus Harvest has organized the sour orange harvest on the university's Tempe campus. The harvest lasts over three days as more than 100 volunteers collect over 6 tons, or 12,000 pounds of oranges, from across the campus. 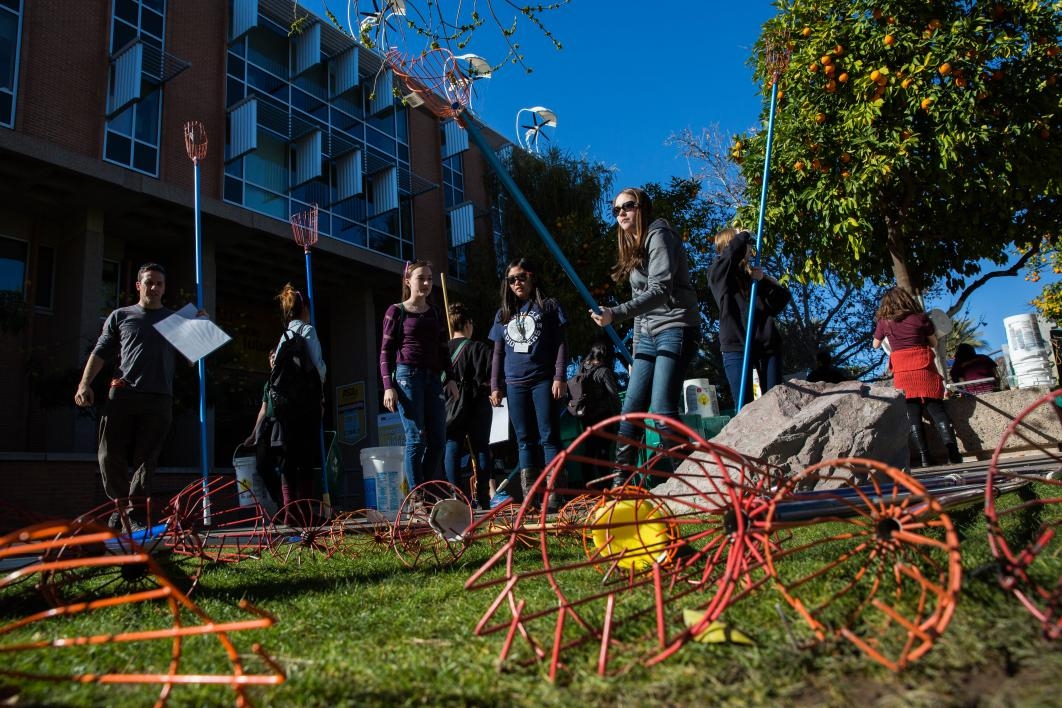 Students select their pickers, regular and periscoped, just outside of the sustainability building on Cady Mall in preparation for the orange harves on ASU's Tempe campus. 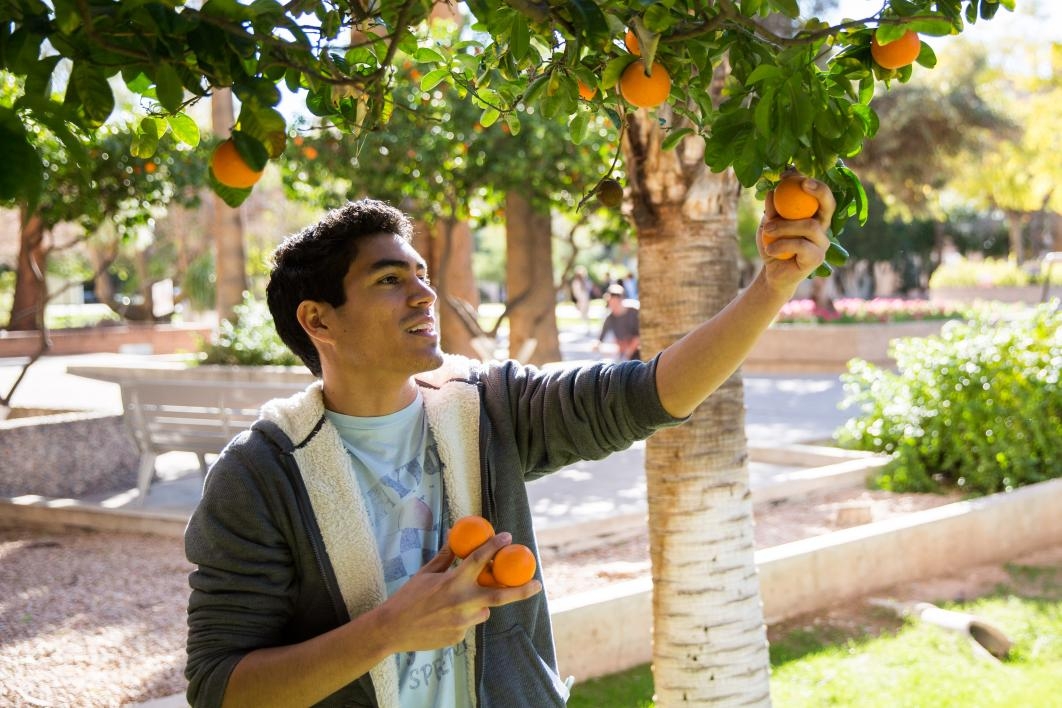 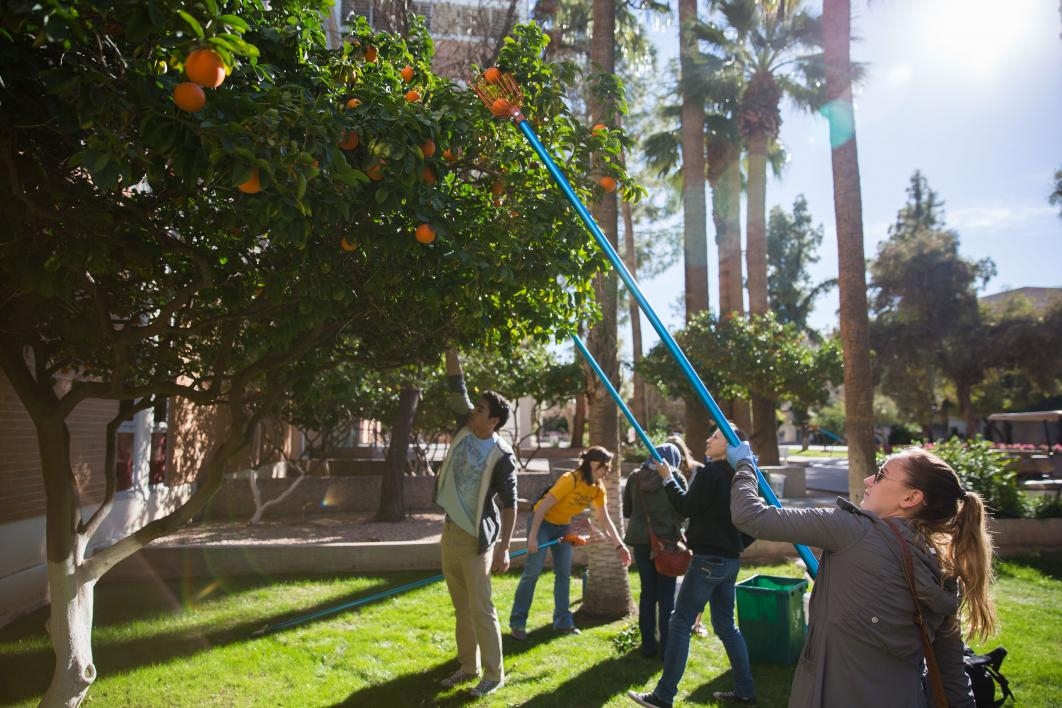 A group of sustainability students work together to pick and sort oranges in front of the Language and Literature building. 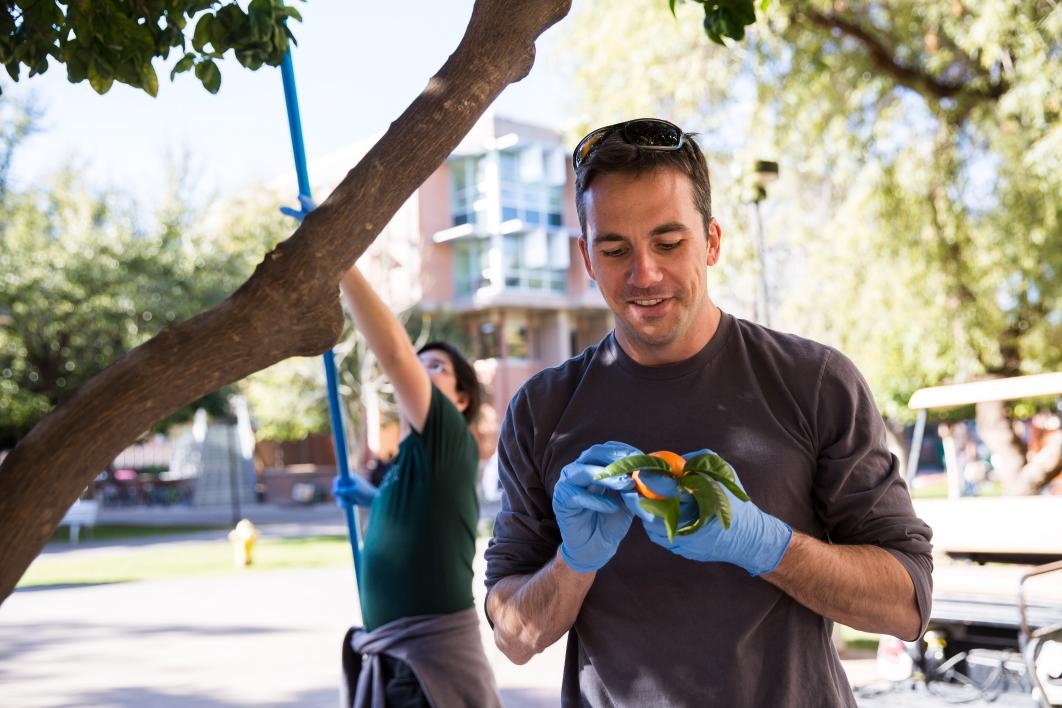 Sustainability graduate student David Fought inspects oranges, deciding which can be collected and which will be composted Friday afternoon. Volunteers make sure to remove any oranges with holes, cuts or that are damaged into another bin where they will be composted for future use on campus. 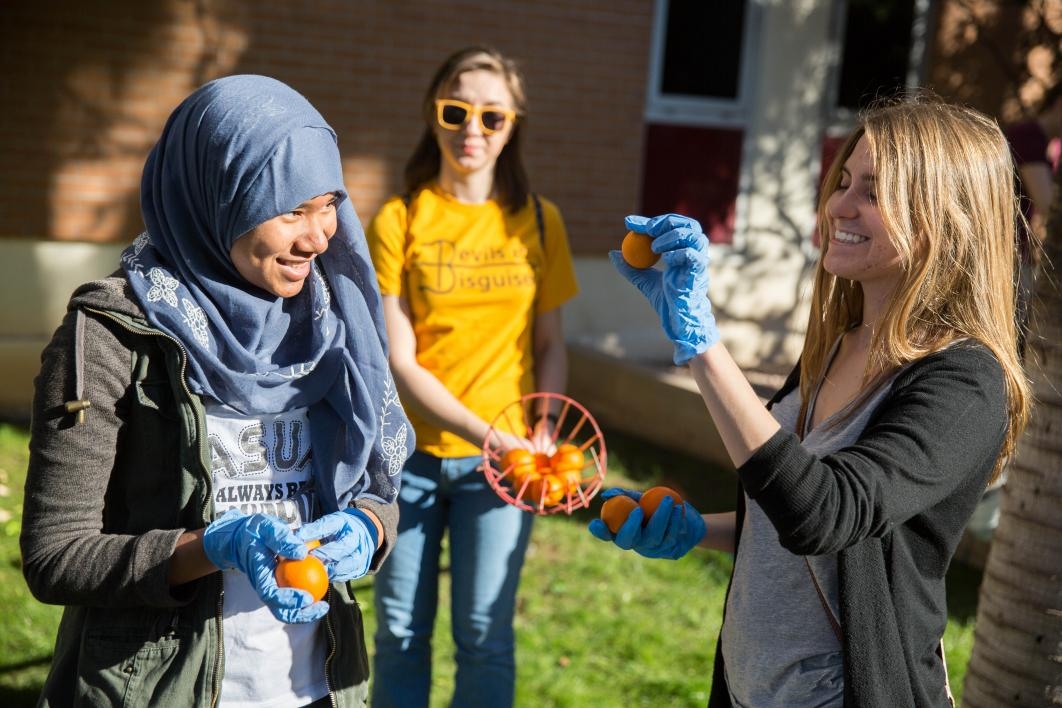 Sustainability freshman Maryam Balqis Abdul Rashid, left, and sustainability sophomore Julia Colbert, right, sort oranges deciding which are good enough to collect and which will be sent for composting during the orange harvest. 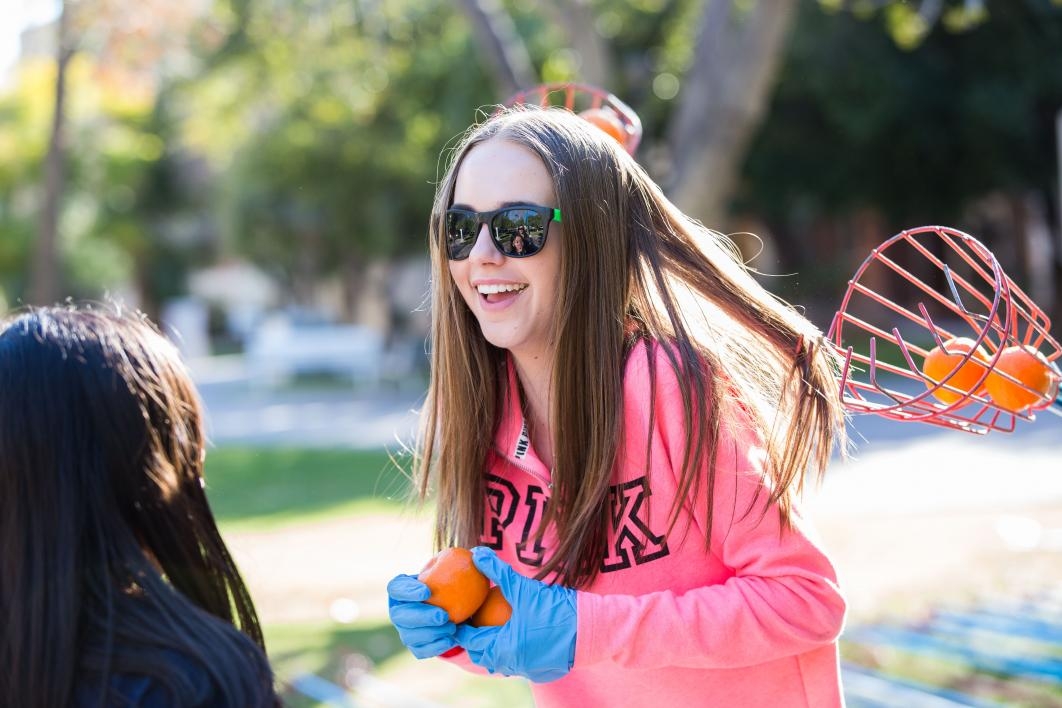 Pinnacle High School student Kara Cordon accidentally gets caught up by her friend while picking oranges on Cady Mall. 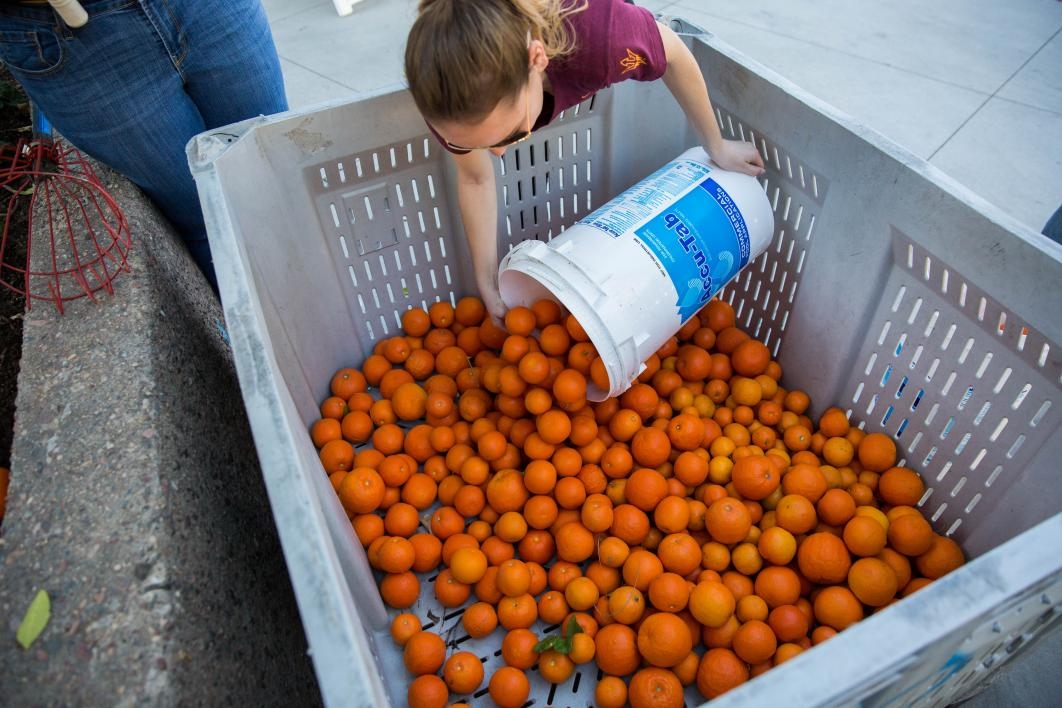 Sustainability senior Shannon Wojcik adds collected oranges to the bin for juicing during the orange harvest. The bin will hold hundreds of pounds by the end of the day. 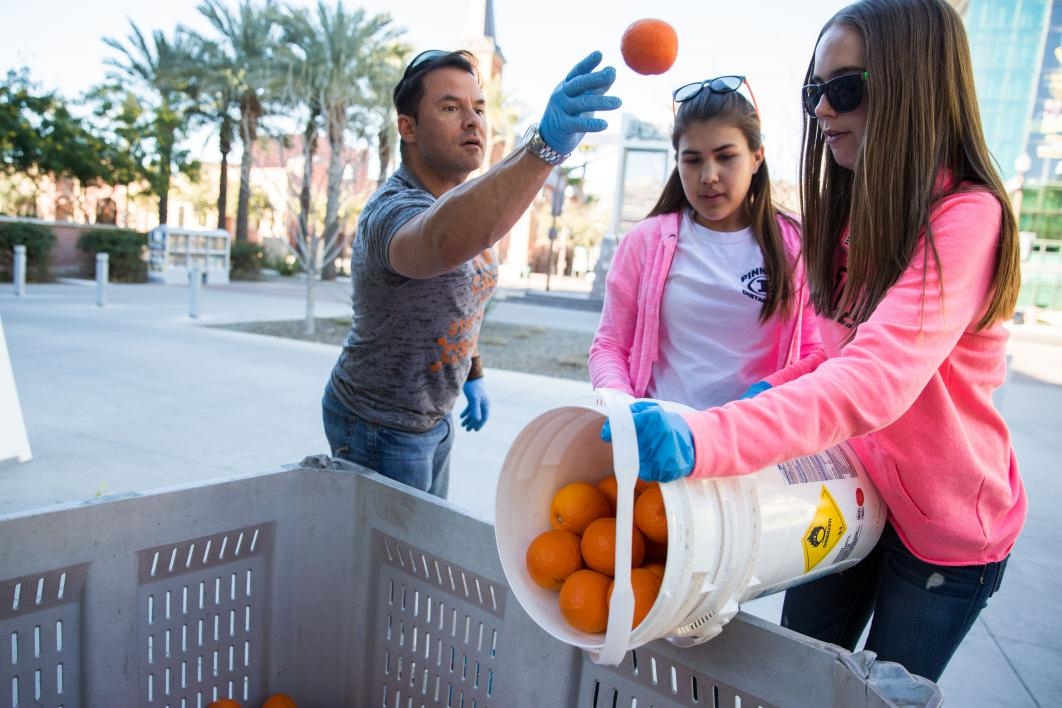 Business sustainability junior Elliott Hobbs tosses an orange for composting as Julia Alemon, center, and Kara Cordon, right add oranges for juicing to the bin during the orange harvest on Cady Mall. 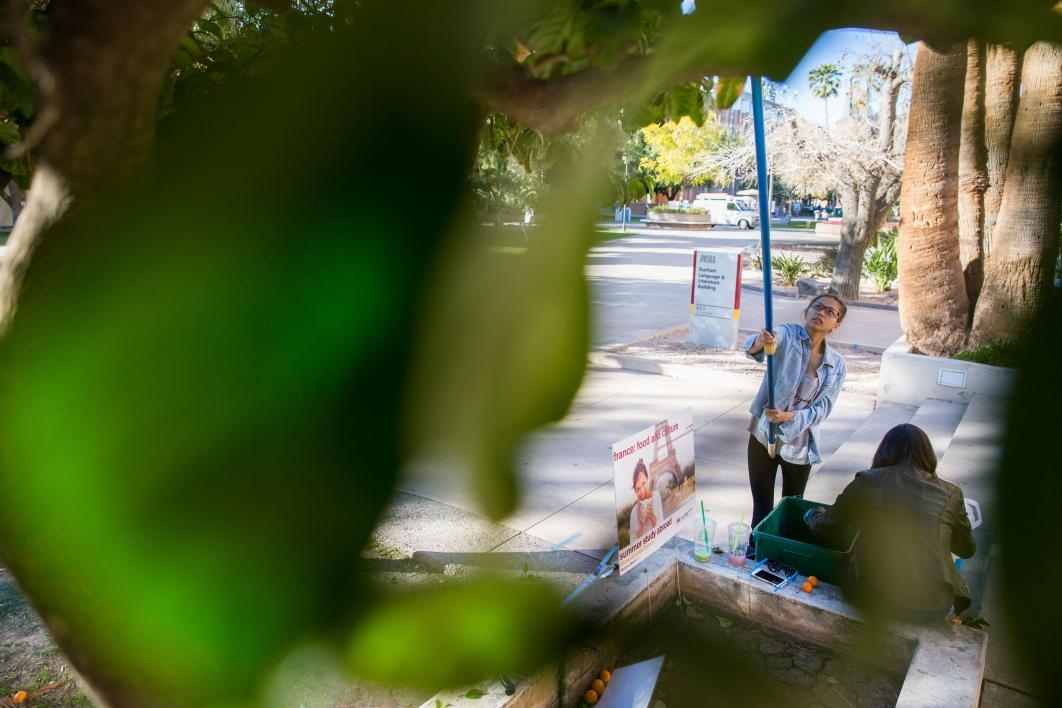 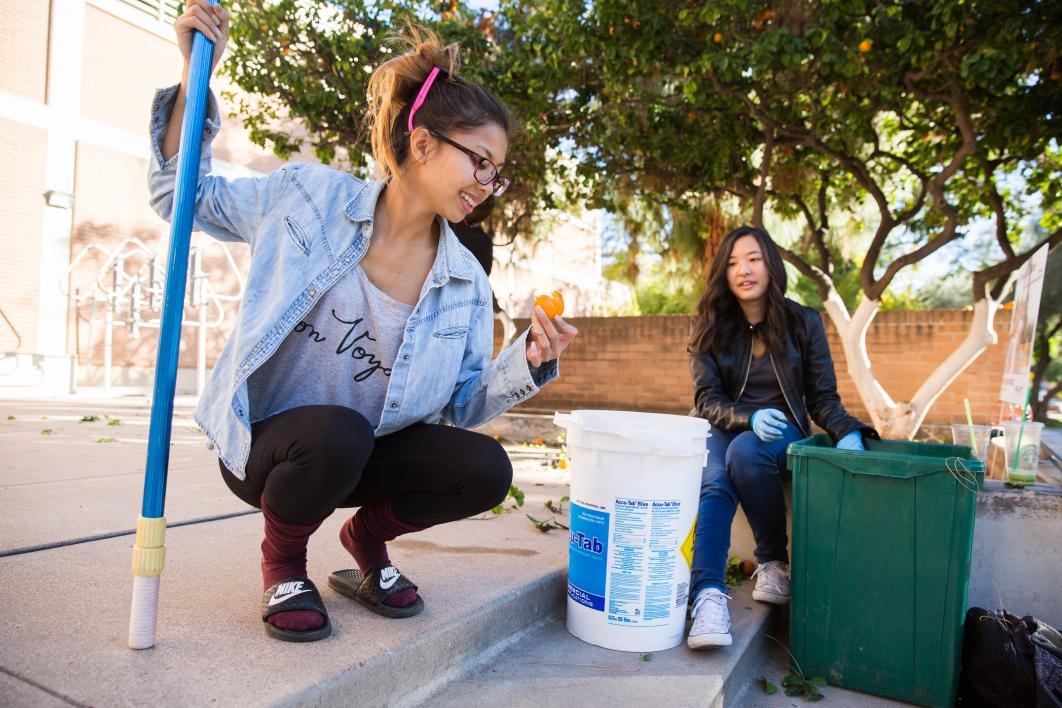 Biochemistry junior Marie Dela Cruz smiles as she inspects the oranges she has picked for cuts or defects on Cady Mall. 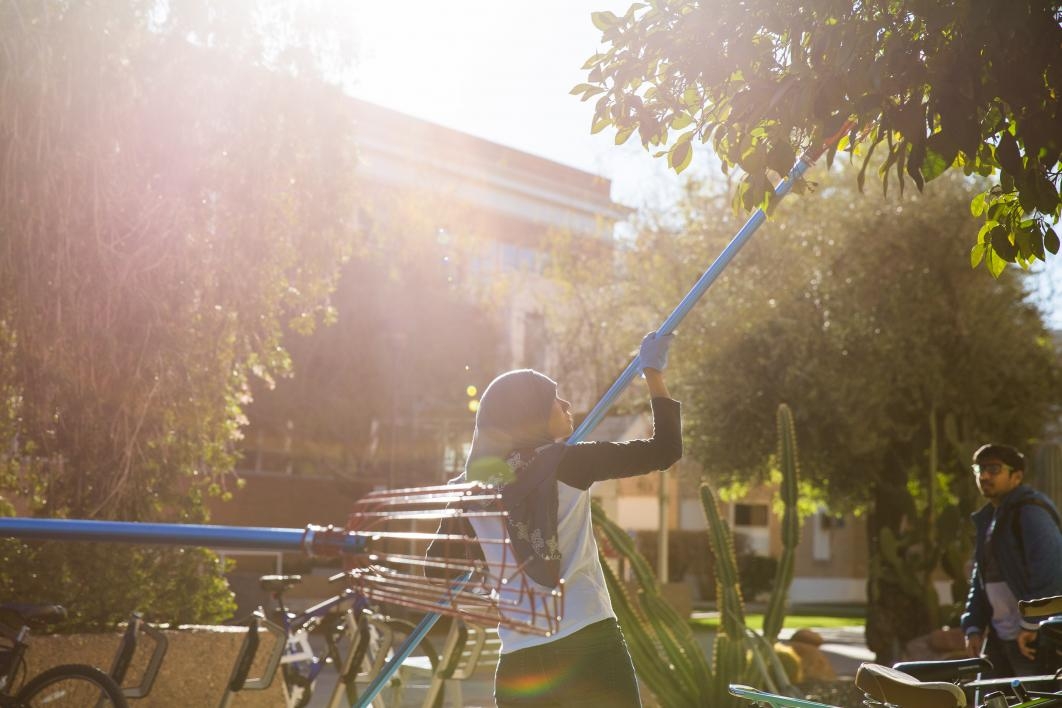 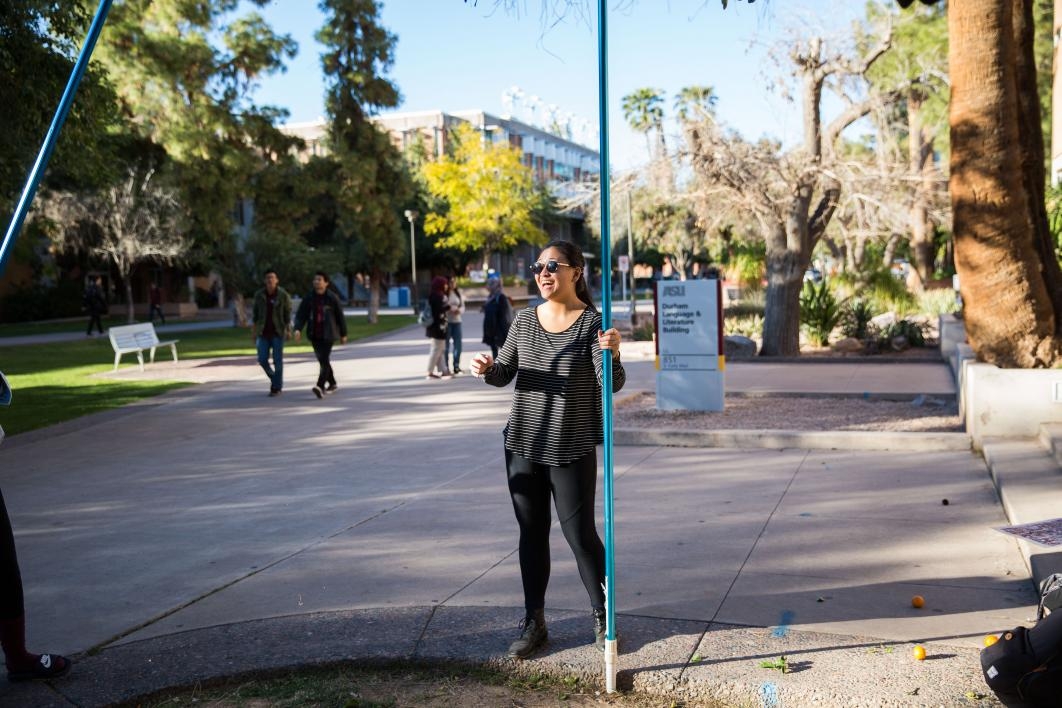 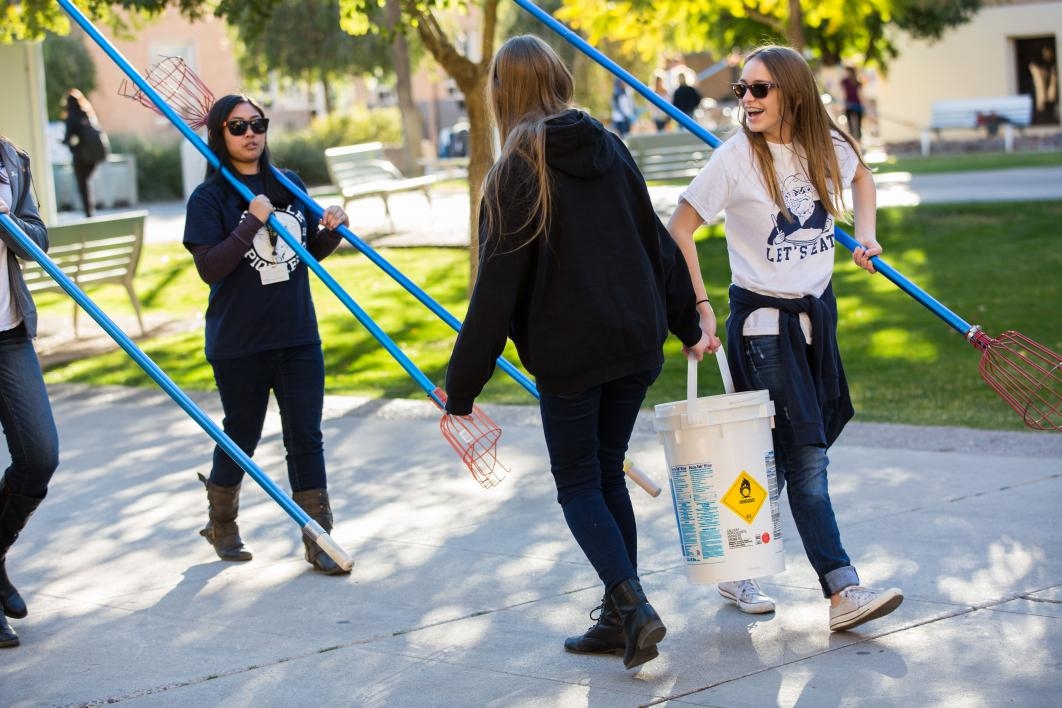 Pinnacle High School key club walks their collected oranges back for sorting at the end of the first day of the ASU Campus Harvest orange harvest. 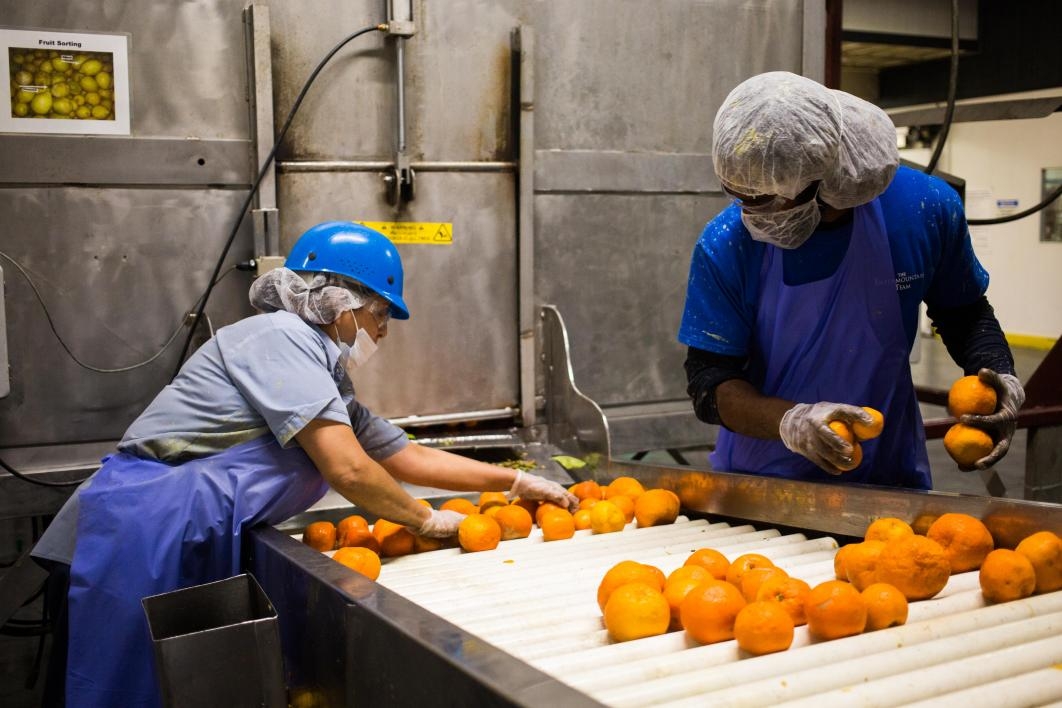 Alex Gatei, right, and Maria Chavez, left, sort any oranges that may have gone bad before they are transported to the washing station at Sun Orchard Juicery in Tempe. 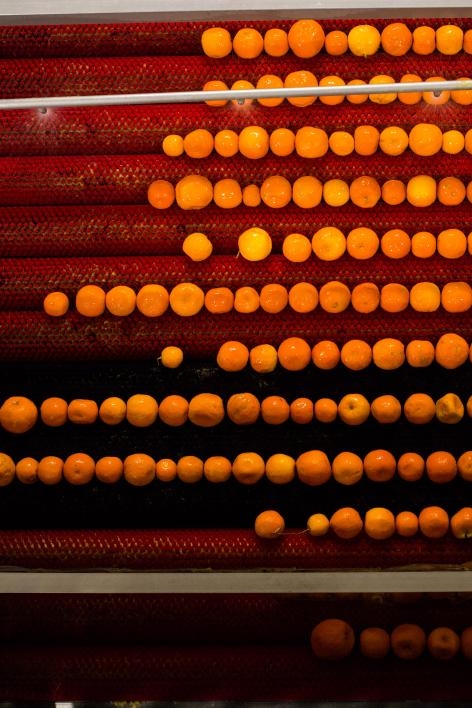 The sour oranges receive a strong wash as rolling scrubbers rotate beneath them and water sprays from above at Sun Orchard juicery in Tempe. 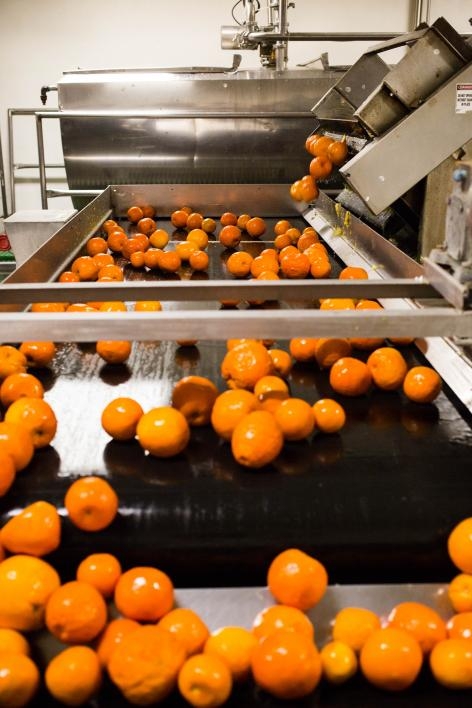 Oranges then travel up a conveyor belt to the extractors where they will be juiced. 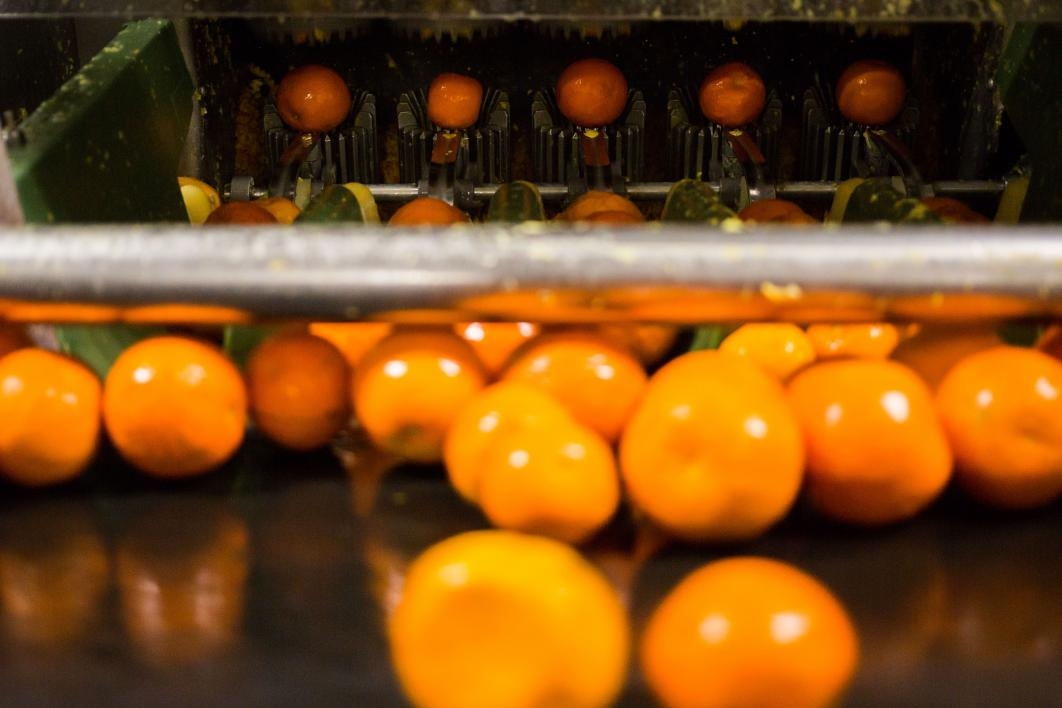 Oranges move through to the extractor where they are crushed whole and the juice is seperated from the peel. 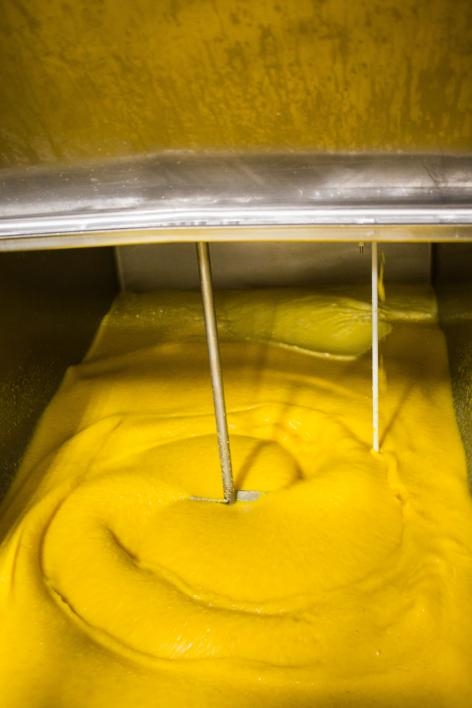 A large container stirs the orange juice as it is squeezed at Sun Orchard juicery. 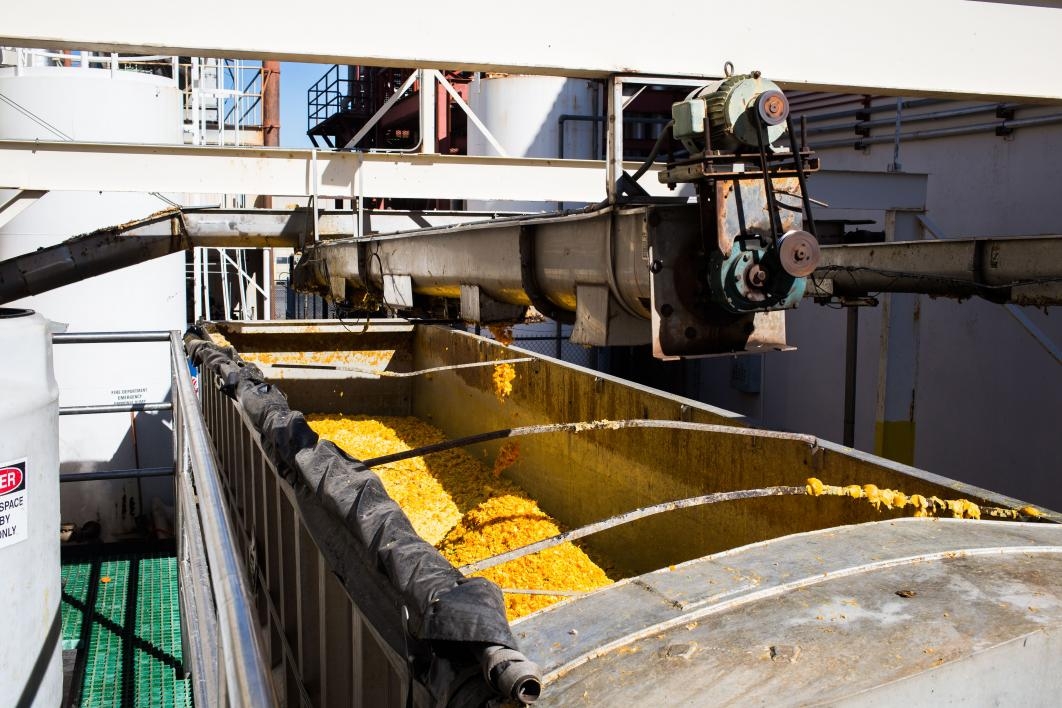 Peels and rind are dumped into a waiting truck to be used for agricultural feed outside. 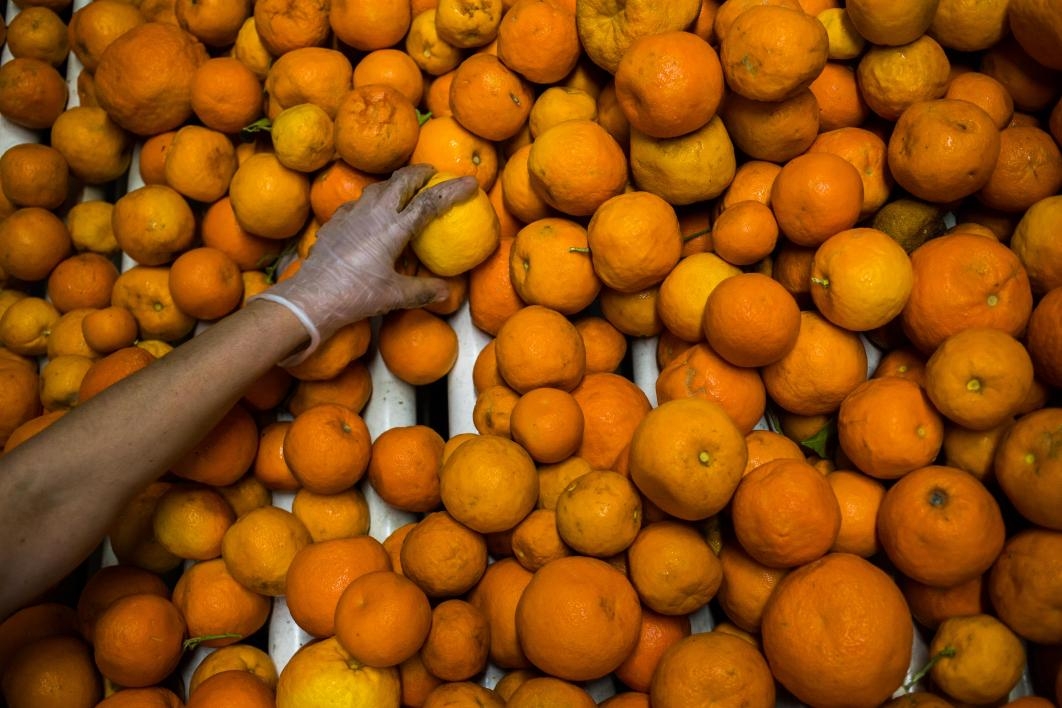 The oranges are then transported to Sun Orchard juicery in Tempe, where they are juiced and bottled to be used for cooking and making "devil ade" — which is served as part of ASU's Aramark campus dining rooms.

Read more about it here: "Putting the squeeze on sustainability."

Body politics: What, if anything, does a politician's body language reveal?

You’re watching a political debate on TV and notice one of the candidates beginning to fidget.The time comes for him to speak and he keeps his eyes trained on the lectern instead of looking directly at the audience.Aha, you think. He’s lying about something. After all, he’s exhibiting tell-tale signs of deception, right?Not necessarily, says Nicholas Duran, assistant professor in the School ... West campus
A person's body language can be deceptive.
There just isn't a foolproof way to tell whether someone is lying.
Pay more attention to how people speak than their gestures to get a good read.
February 8, 2016

What, if anything, does a politician's body language reveal?

You’re watching a political debate on TV and notice one of the candidates beginning to fidget.

The time comes for him to speak and he keeps his eyes trained on the lectern instead of looking directly at the audience.

Aha, you think. He’s lying about something. After all, he’s exhibiting tell-tale signs of deception, right?

“There really are no tell-tale signs that someone is lying,” he said, for one simple reason: Humans have gotten very good at the art of deception.

“Evolutionarily speaking, people are very good at lying. If it was so easily detected, there would be no point in it.”

Duran studies complex cognitive processes as they are revealed in the continuous processes of movement and language. To put it simply, he looks at how a person’s behaviors during conversation might reflect his or her thought processes.

However, it’s not something that can be done with the naked eye. In order to detect these so-called “micro-behaviors,” a person must be recorded and a researcher must then slow down the recording, going frame-by-frame to detect subtle changes in expression.

That’s why it can be dangerous to assume certain obvious behaviors — such as fidgeting or lack of eye contact — are indicative of lying.

A fellow School of Social and Behavioral Sciences faculty member, lecturer Cynthia Gaffney cautions, “It is a poor habit of interpretation to think that crossed arms always means defiance or direct eye contact means truthfulness. Human behavior and context are far too complex to be reduced to such easy reads. We lose cultural influence as well as individual behavior and quirks when we assume we know what a behavior such as a yawn means.”

According to Duran’s research, a person who is exhibiting behavior like crossed arms or slouching may be doing so because they’re under emotional duress due to something unrelated, and not actually lying at all.

Though you may not be able to tell whether someone is trying to deceive you based on his or her body language alone, you may be able to learn a thing or two by paying close attention to how the person speaks.

As Duran explained, “The better deceivers exhibit fewer verbal repairs and hesitations when they speak. They also probably have greater verbal and nonverbal fluency; greater rhythms of speech and movement.”

For those less skilled at deception, the sheer mental gymnastics required to project truth while maintaining a false reality might manifest in a breakdown of the fluidity or rhythm of their speech and movement; a phenomenon researchers refer to as entropic, or tending toward degradation and chaos.

And considering public speaking is part of their job description, it’s only logical that politicians would be good at it; nothing can be assumed from their smoothness of speech.

So what’s the takeaway?

Both Duran and Gaffney agree that the better you know someone, the easier it is to tell if he or she is lying. (For most people, that means sussing out a politician’s true beliefs is likely next to impossible.) However, thanks to the complexity of the human mind and body, there just isn’t a foolproof method to detect deception. So trust your instincts — but also question them from time to time.