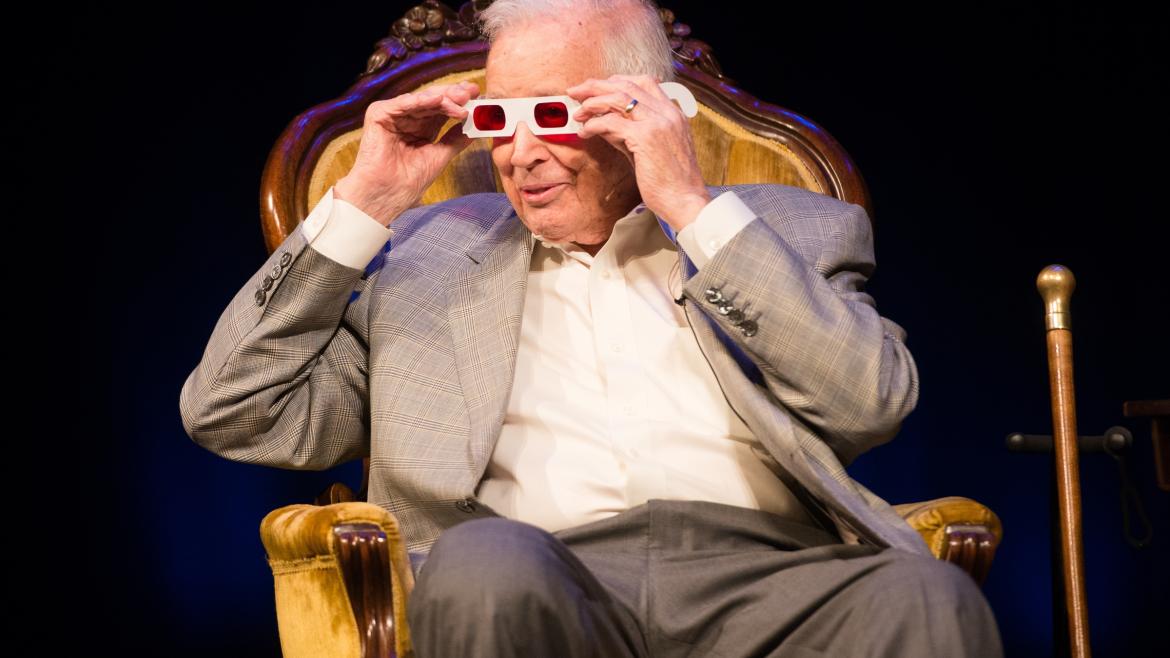 A fresh look at Hugh Downs

Rather than a bar joke, that was Tuesday night’s result of the latest in Arizona State University’s Origins Project dialogues, a series of freewheeling conversations between theoretical astrophysicist Lawrence Krauss and a variety of thinkers on humankind’s fundamental questions, and sometimes just funny stories.

Television legend and Emmy Award winner Hugh Downs joined KraussKrauss is also Foundation Professor of the School of Earth and Space Exploration, which is an academic unit of the College of Liberal Arts and Sciences., director of the Origins Project, for “An Origins Project Dialogue, Seventy Years of Life on TV: Politics, Religion, Sex and Science” at the Scottsdale Center for the Performing Arts.

Downs turned 95 on Feb. 14. “My higher education has never ended,” he said. “It’s gone from one thing to another.” In addition to being one of the most familiar figures in the history of television, Downs has written a cello concerto, earned his private pilot’s license and written a paper on astrophysics. 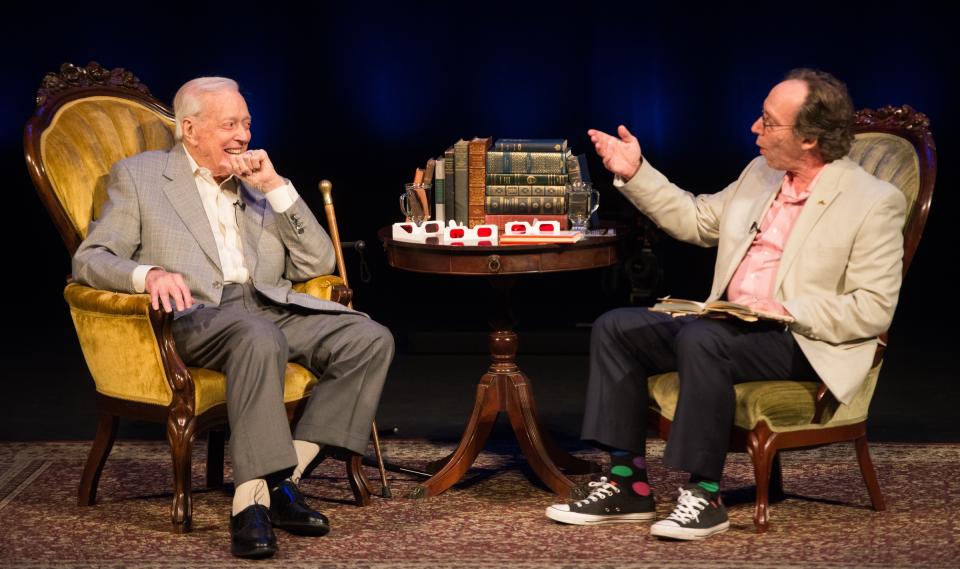 His career began by accident. During the Depression, Downs’ father told him he had to get a job. As he walked past the local radio station, he decided to go in and see if they had any openings. The station manager told him he’d give him a tryout on the spot. After Downs read an ad for a paint store, the manager told him, “That was really bad, but great oaks from little acorns grow.”

“Tonight we’re going to talk about all the things you can’t talk about on TV,” Krauss said.

“We ought to have quantum physics classes every Sunday, so maybe that’ll sink in,” Krauss said.

Downs said he would like to interview Pope Francis. “He has the courage of an elephant,” Downs said.

Downs talked about interviewing Dwight D. Eisenhower after his presidency. What was the biggest difference? “A lot more people beat me at golf now,” Eisenhower said.

“You have an historical perspective about the way elections are done,” Krauss said.

Downs referred to the broad field of Republican candidates in the current race. “You worry that someone out of that lineup might end up running the country who isn’t qualified,” he said.

Downs described a lunch meeting he had with Donald Trump once. Trump wanted the air rights over the midtown Manhattan church where Downs was a vestryman. 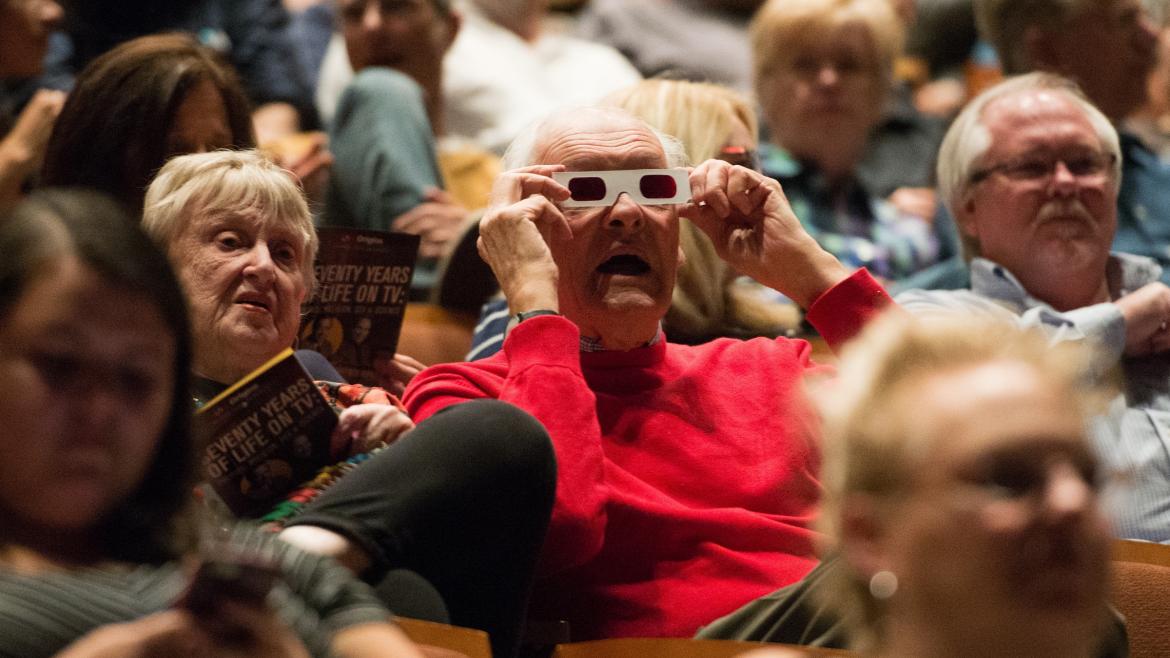 A portion on the
stage backdrop
and flier had
3-D elements,
prompting Downs
(top photo) and
members of the
audience to don
special glasses.

“He offered me an obscene amount of money,” Downs said. “He kept upping the ante.” Downs refused, saying if the idea had merit he would vote for it anyway. “He seemed to go away dismayed because he’d met someone who couldn’t be bought.”

Krauss brought up Janet Jackson’s loss of control over her clothes during the Super Bowl halftime show in 2004 and the FCC fines levied on broadcasters over obscenity charges.

“It seems to me people have breasts,” Krauss said. “But every night there’s six ‘Law & Orders’ with people getting stabbed in the eye. … It’s obscene to me.”

“There has been a tremendous change in what we would call news since you began,” Krauss said, citing the 24-hour news cycle. “It becomes entertainment; you have to compete.”

“He has the courage of an elephant.”
— Hugh Downs, on Pope Francis

Krauss asked Downs if he’d ever chosen stories for ratings or because they were salacious. “That’s all right,” Downs said. “I don’t think there’s anything wrong with that, as long as the facts are right.”

On Downs’ bucket list: “I want to go up to the International Space Station and float around.”

He asked Krauss, “How do you get across tough things like higher math so the public understands it?”

“All of us learn things,” Krauss said, adding if you want to find out how much you don’t know about something, try writing about it. “The answers are not as interesting as the questions.”

“The more you know, the more you expand the periphery of your ignorance,” Downs said.

“My futures are depressing, but yours never are,” Krauss said.

In the arid Southwest, roughly 90 percent of the region’s rainfall evaporates, leaving relatively little water to fill streams and reservoirs or soak into the ground. Predicting this evaporation, and its responses to changes in land use, is essential to managing precious water resources. Arizona State University scientists Ted Bohn and Enrique Vivoni, of the School of Earth and Space Exploratio...

In the arid Southwest, roughly 90 percent of the region’s rainfall evaporates, leaving relatively little water to fill streams and reservoirs or soak into the ground. Predicting this evaporation, and its responses to changes in land use, is essential to managing precious water resources.

Arizona State University scientists Ted Bohn and Enrique Vivoni, of the School of Earth and Space Exploration, discuss a new technique in the journal Water Resources Research, which uses a combination of satellite imagery, field observations and models to estimate evapotranspiration - evaporation from soils and from plant transpiration. Evapotranspiration is an important component of the hydrological cycle and a major contributor to downwind rainfall. 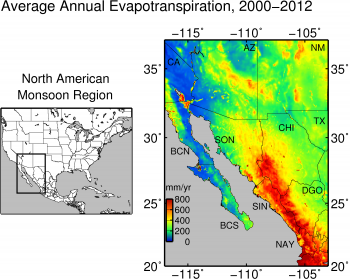 Bohn and Vivoni used a well-established model to study evapotranspiration in southwestern U.S. and northwestern Mexico, but modified it to account for soil evaporation, irrigated agriculture, and the seasonal variability of the land surface. An important difference from previous studies was the inclusion of irrigated agriculture in the model.

“The results of our study hold great promise for satellite monitoring of irrigation water usage on a global scale,” says Bohn, “particularly in nations that lack good records or policies of data transparency.”

Desert shrub lands, for example, produce their peak evapotranspiration shortly after monsoon rains begin, while mountain forests are slower to peak and continue evapo-transpiring well into the autumn.

In contrast, evapotranspiration from irrigated agriculture has little relationship with rainfall, and exhibits two peaks per year, during the winter and summer cropping seasons. These observed differences in peaks show that expansion or reduction of agriculture can dramatically change the timing and amount of local evapotranspiration, with potential effects on rainfall.

“It turns out,” says Bohn, “that irrigated agriculture accounts for almost ten percent of the region’s annual evapotranspiration, which is a large amount for previous studies to have ignored.”

A major benefit of the modified model used for this study is a better understanding of our water resources, and how they respond to changes in land use.

“It will allow not only for more accurate climate and weather forecasts, but also for government agencies to plan better for anticipated changes in climate,” says Bohn.