The wild chimps of Kibale

ASU professor continues to find surprises in studies in Uganda chimp project.
Less than 300,000 chimps in the wild; those numbers are expected to drop.
February 10, 2016

Kevin Langergraber has been studying chimpanzees in the wild for 15 years.

Before he became a professor and had to teach eight months out of the year, he’d spend six months to a year at a time in the field, 12 hours a day, seven days a week.

“The most surprising thing about the job is that you can still be surprised by the job,” said Langergraber, a primatologist and assistant professor in the School of Human Evolution and Social ChangeThe School of Human Evolution and Social Change is a unit of the College of Liberal Arts and Sciences. at Arizona State University.

“After a while you’d think, ‘OK — I’ve spent thousands of hours watching these guys. What is going to surprise me when I wake up and spend my 12-hour day in the forest?’ ” he said. “Despite all this time I’m still shocked when I go back and the chimps show me something I hadn’t seen before.”

Langergraber, who has been at ASU for a year and a half, co-directs the Ngogo Chimpanzee Project in Kibale National Park, Uganda, home to the largest wild chimp community in the world. About 200 individuals live in the 35-square-kilometer preserve in the middle of the 800-square-kilometer national park. The community has been studied since 1995. 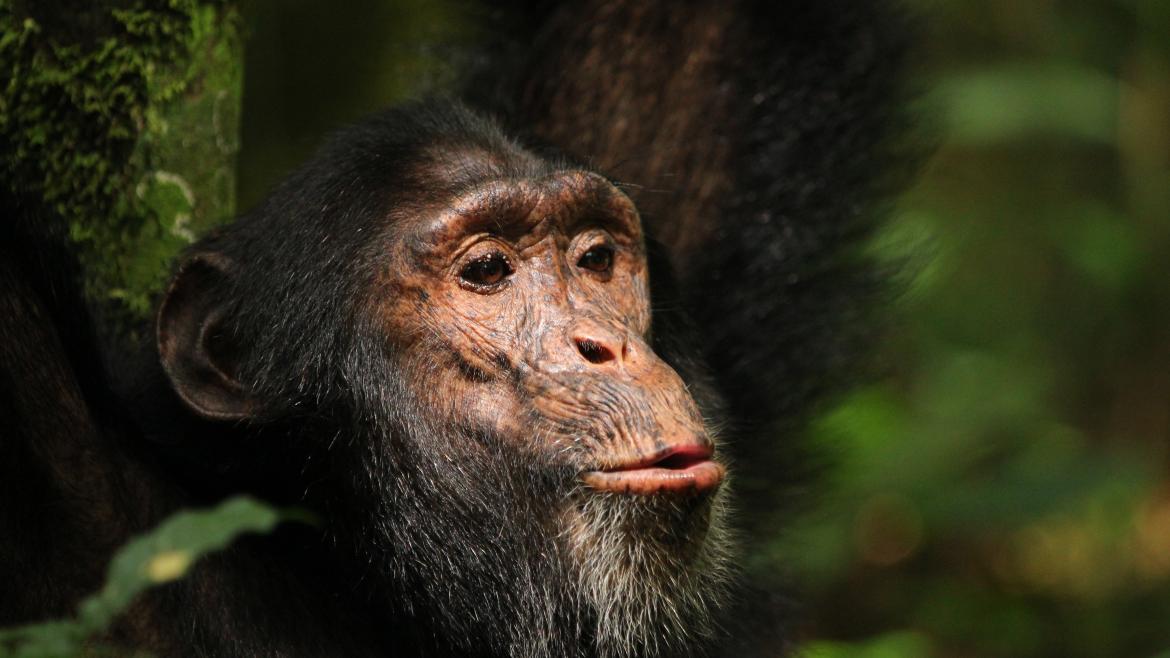 One big surprise came last summer. In the beginning of the season, food was lean. When food supplies are down, chimps are hard to find because they split into tiny groups to forage. But food availability crept up, to the point where three of their favorite fruits ripened at the same time.

“They basically had more food than they knew what to do with at this point,” Langergraber said. “It was falling off the trees and sitting on the ground uneaten.”

About 30 adult females with 60 kids congregated. “There were these huge parties, these huge hordes of chimpanzees, which was very unusual, especially for females, which are more solitary than male chimpanzees,” he said. “They began exhibiting really male-like behavior.”

Chimps hunt monkeys, but it’s almost always done by males, in groups. Females do hunt, but much less than males.

“(The females) started going on this little mini-hunting binge, where they were hunting almost every day over the course of a few weeks,” Langergraber said. “That is something I’d never expected to see in my life. … I’ve been there for 15 years, and this is something out of the blue I think will be important for learning about why in general is it males hunt more than females and questions like that.”

Chimpanzees are classified as endangered by the International Union for the Conservation of Nature. They’re endangered throughout their range across equatorial Africa. The IUCN estimates there are less than 300,000 chimps in the wild, according to a rough estimate made in 2003. Those numbers are expected to drop.

“Due to high levels of exploitation, loss of habitat and habitat quality due to expanding human activities, this species is estimated to have experienced a significant population reduction in the past 20 to 30 years, and it is suspected that this reduction will continue for the next 30 to 40 years,” the IUCN Red List said on its website.

“Kibale National Park is probably the last stronghold of chimpanzees in the country of Uganda,” Langergraber said. “We don’t know how exactly how many chimps are there.”

Chimpanzees are hard to count. They live in communities with permanent members, but it’s like a university — you never see the whole community in one place at one time. Chimps make nests every night to sleep in. Counting the nests has been the way the population size is estimated — anywhere from 800 to 1,000 in Kibale. 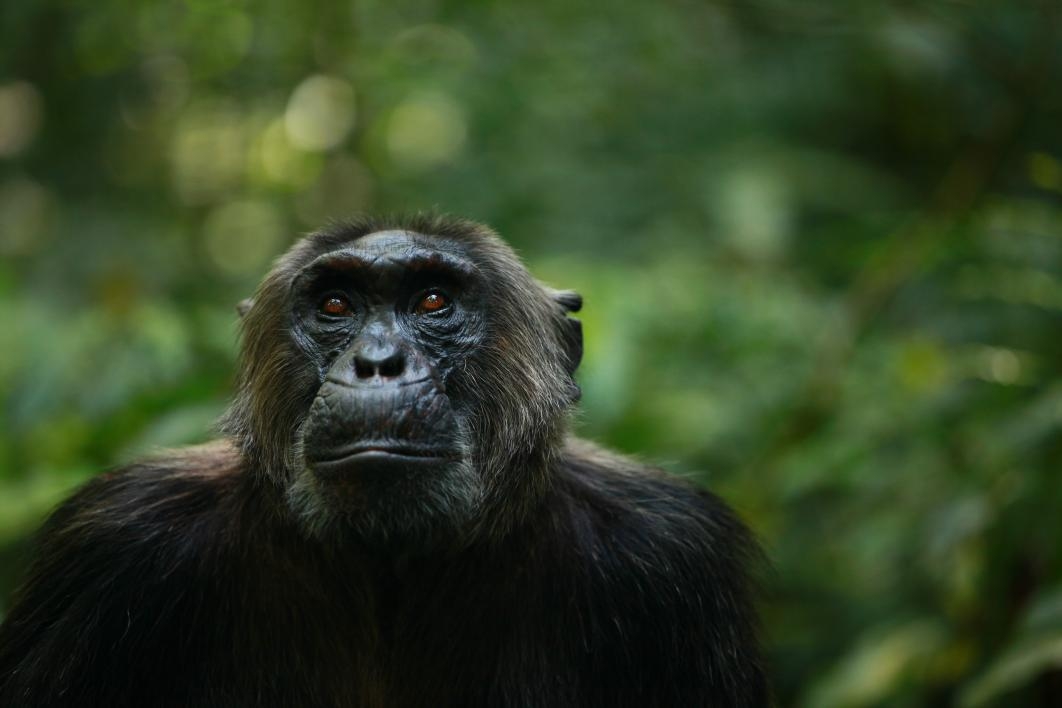 Kozena, an infant female chimp. Counting chimpanzees can be difficult, as the entire community is never together in one place. At the Ngogo Chimpanzee Project, they're trying a new approach: a genetic census using chimp feces collected by park anti-poaching patrols. 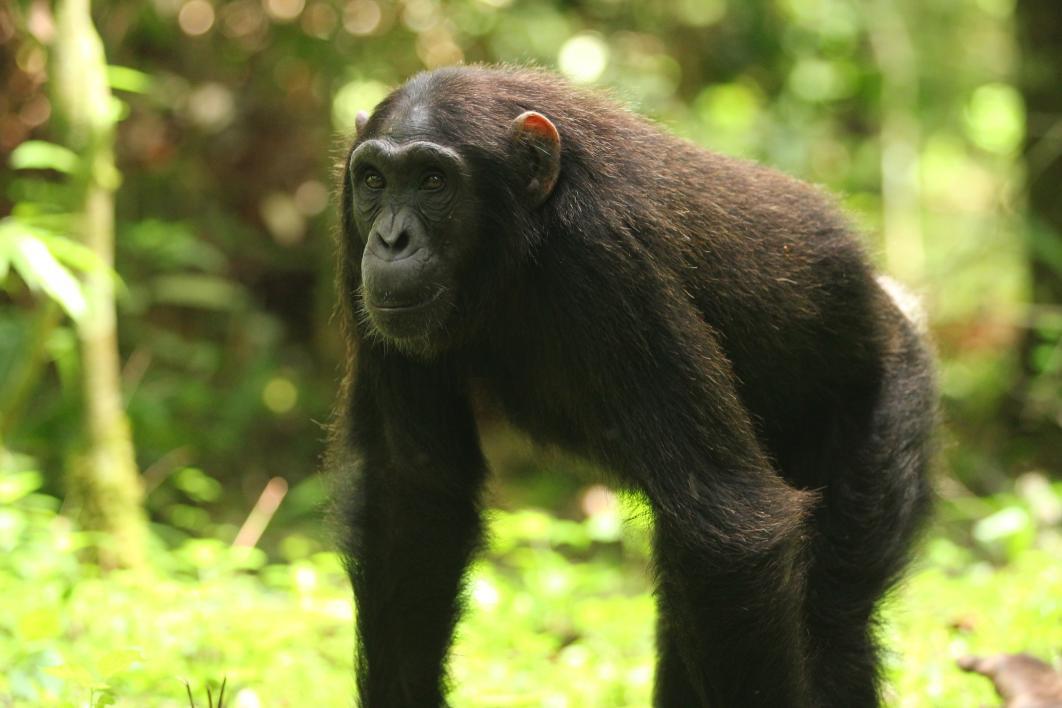 Scarlett, a juvenile female chimp. Poaching is widespread throughout the whole park. Eating chimpanzee is actually taboo in this part of Uganda, but poachers go after bush pig and duikers — tiny forest antelope — and chimps become caught in the snares. But the research presence in Ngogo wards poachers away from that area of the park. 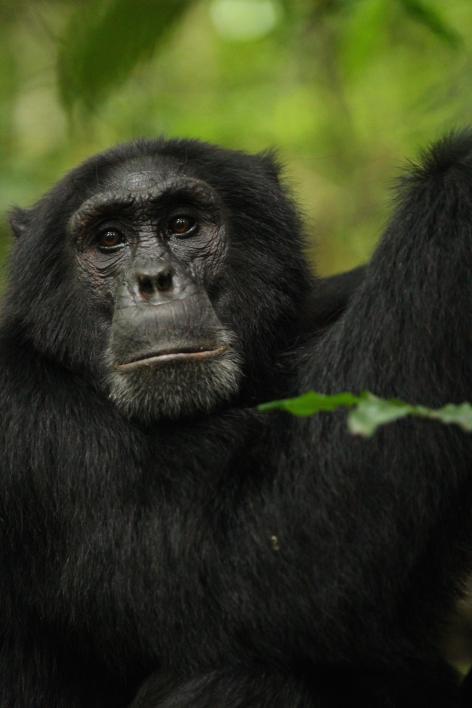 Rollins, an adult male chimp. In the chimp community, hunting is usually done by males, with monkeys being a key prey. 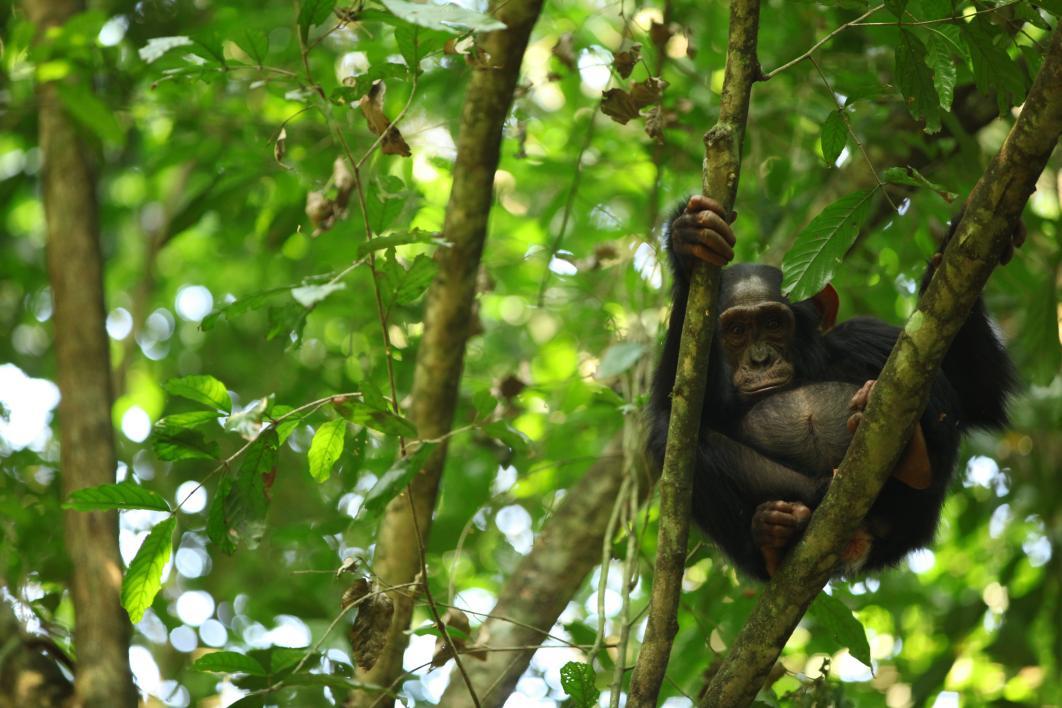 Williams, a juvenile male chimp. The Ngogo area is patroled not only by local wildlife-authority officers, but also by two three-person snare-removal teams — ex-poachers lured from the life with good stable jobs. The project hopes to hire a third team for patrols. 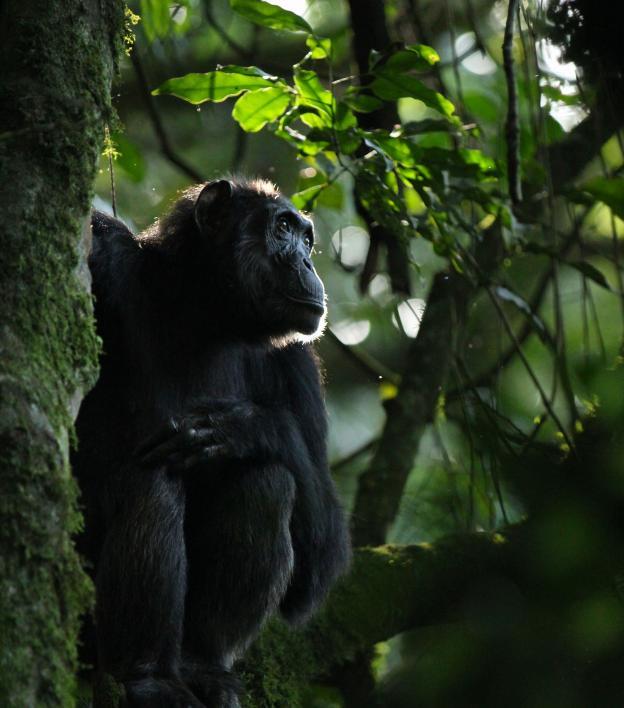 Leonora, an adult female chimp. A recent surprise finding by Langergraber and his team: About 30 adult females with 60 kids congregated when there was an unexpected overflow availability of food — three of their favorite fruits ripened at the same time. The females went on a hunting binge, a very unusual behavior. 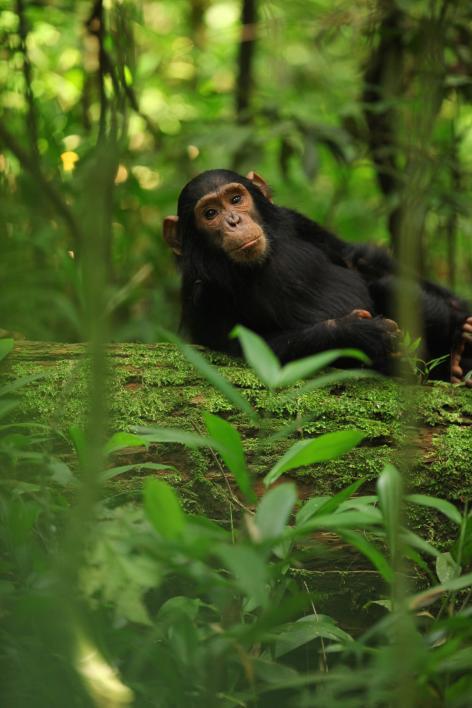 Susannah, an infant female chimp. Chimpanzees are classified as endangered by the International Union for the Conservation of Nature. They’re endangered throughout their range across equatorial Africa. 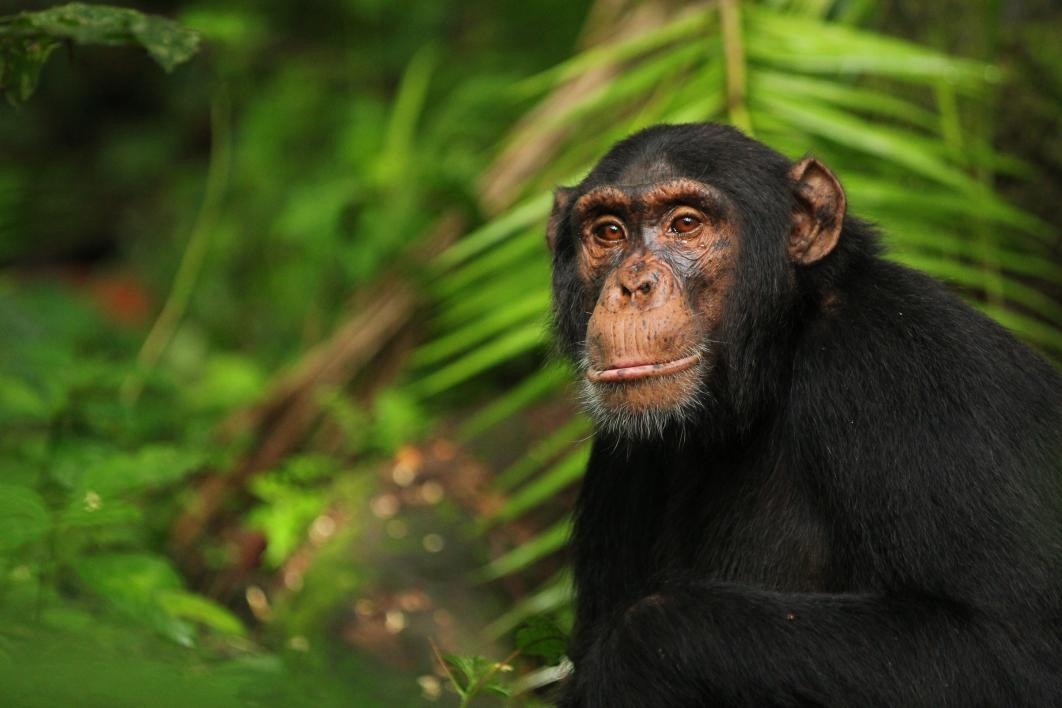 Abrams, an adult male chimp. Langergraber, who has been at ASU for a year and a half, has studied chimpanzees in the wild for 15 years. 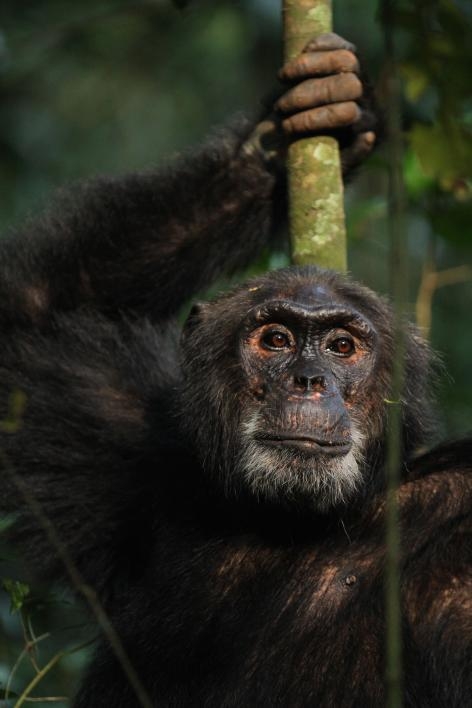 Garrison, an adult male chimp. Chimps are long-lived; there are several at Ngogo more than 60 years old.

“We know these nest surveys aren’t terribly accurate,” Langergraber said. “One of the things I’m doing in my research is to really find out how many chimpanzees are in Kibale National Park. We’re doing that through a genetic census.”

Park anti-poaching patrols pick up chimp feces on their patrols. Langergraber does genetic analyses of the samples.

“Then you get a genetic fingerprint for that individual,” he said. “We’re doing this over time. It’s a long-term process. We’ve been doing it for a couple of years now. Based on how many times you’re collecting the same individual over again, versus an entirely new individual you haven’t seen before, you can get an estimate of the population size.”

“Our preliminary results suggests there may be twice as many chimpanzees living in Kibale National Park as we previously thought,” he said. “They’re doing well in Kibale, for now.”

Poaching is widespread throughout the whole park. Eating chimpanzee is actually taboo in this part of Uganda, but poachers go after bush pig and duikers — tiny forest antelope — and chimps become caught in the snares. “They’ll spear it and feed it to their hunting dogs,” Langergraber said. “Poaching has increased, especially for larger game, like elephants.”

The research presence in Ngogo wards poachers away from that area of the park. Two three-person snare-removal teams — ex-poachers lured from the life with good stable jobs — patrol Ngogo in conjunction with local wildlife-authority officers. 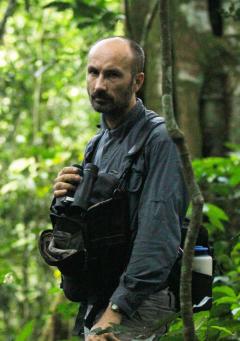 “Our guys work with the (Uganda Wildlife Authority) rangers, who have guns, which really helps to protect the park,” said Langergraber (pictured left). The project hopes to hire a third team for patrols.

Research with chimpanzees is long-term. Chimps are long-lived and slow-producing — one infant every five years.

“That makes them very difficult to study,” Langergraber said. “Just now chimpanzee researchers have been out there long enough to really document the whole lifespans of chimpanzees. In particular one of the things we’re interested in in evolutionary biology is what determines which individuals are reproductively successful. ... Things like that are important stuff that’s coming up now and in the future.”

There are multiple chimps at Ngogo more than 60 years old, including one very rare great-grandmother.

“We’ve got a bunch of old ladies running around the forest there,” Langergraber said. “It’s a good place to be a chimp, Ngogo.”

Television legend and Emmy Award winner Hugh Downs will sit down with Arizona State University’s Lawrence Krauss for an intimate discussion on politics, religion, sex and science. The event, “Downs and Krauss: An Origins Project Dialogue,” will be held at 7 p.m. Feb. 16, 2016 at the Scottsdale Center for the Performing Arts.“Hugh Downs is an incredible, interesting and thoughtful man,” s...

Emmy Award winner will share his perspectives on science, changing social mores and taboos in journalism

Television legend and Emmy Award winner Hugh Downs will sit down with Arizona State University’s Lawrence Krauss for an intimate discussion on politics, religion, sex and science. The event, “Downs and Krauss: An Origins Project Dialogue,” will be held at 7 p.m. Feb. 16, 2016 at the Scottsdale Center for the Performing Arts.

“Hugh Downs is an incredible, interesting and thoughtful man,” said Krauss, director of the Origins Project at ASU. “Indeed one of the most interesting people I have had the pleasure to get to know. Moreover, he has lived through more technological and social change than most of the rest of us, all the while in the public eye; he can comment on it with unusual intelligence and wit. He broke barriers on television with the first woman co-host, to interviewing the late Martin Luther King Jr., and he has broken barriers in life, including going acrobatic stunt gliding on his 90th birthday.

“People may not realize that Downs helped advance the environmental movement in the early 1970s and 1980s before we really talked about global warming, and his interest in reproductive rights dates to the early 1970s before Roe v. Wade,” Krauss said. “He was talking about melting ice in the early 1980s and then visited Antarctica, writing a follow-up piece in 1991 called ‘Who Owns Antarctica?’ He has been an advocate of science and media literacy, and with our continually changing media landscape, it will be fascinating to have a public conversation ranging across a wide spectrum of topics, including some that are too controversial for television.”

Downs, the former "Today Show" host, also will talk about his more than 70 years of influence in media, the changing landscape of public knowledge, and the few taboos that remain in modern journalism.

Tickets are $15; $35 for VIP passes; and free for ASU students. To reserve free student tickets (one ticket per student), please email boxoffice@sccarts.org or call the Scottsdale Center for the Arts box office at 480-499-8587. You must identify yourself as an ASU student and will need your student ID when you pick up your tickets at the box office.