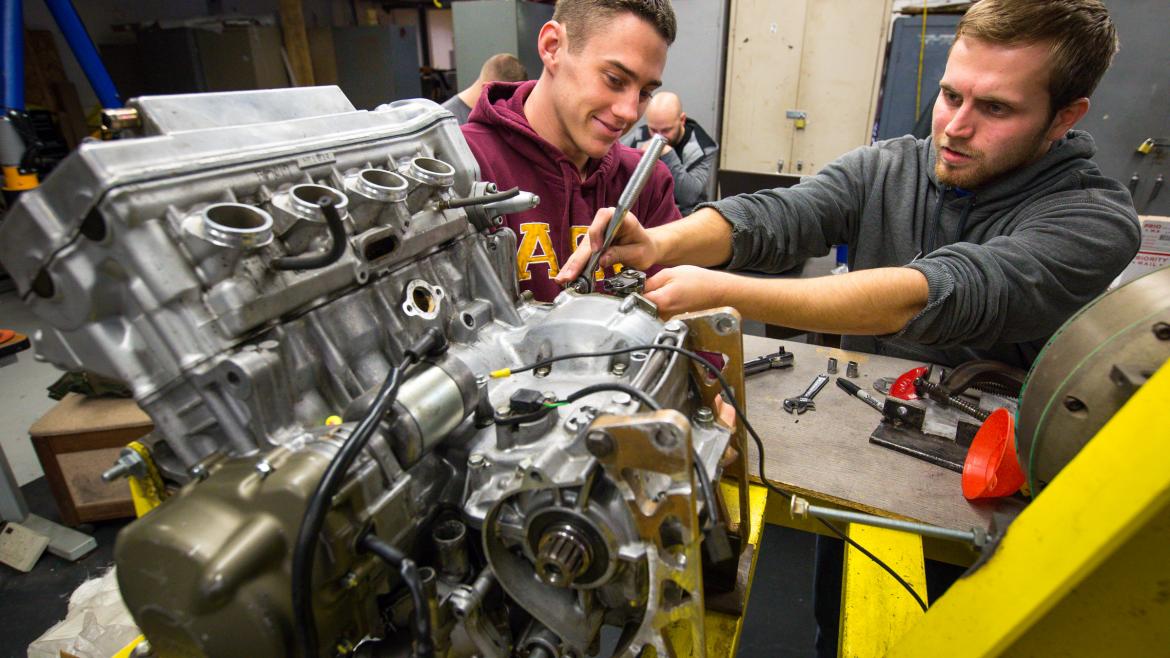 Coming into the home stretch

Editor’s note: This is the latest installation in a yearlong series about ASU's Formula SAE Formula SAE is a student design competition organized by the International Society of Automotive Engineers (now known as SAE International).team. Find links to previous stories at the end of this article.

The Formula-style race car being built by the Arizona State University students of the Formula Society of Automotive Engineers is taking shape, but they are still under pressure to get it track-ready for the testing they didn’t have time for last year.

Despite money woes, scarce resources and even injuries — a few team members sported wrist braces from a four-wheeling trip to the dunes at Glamis, California — they are soldiering on through the build and looking ahead to the national competition in Nebraska in June. Morale is high; one team member is even celebrating being hired at Ford.

“I’m happy with the progress, but it’s still stressful,” said chief engineer Wes Kudela, a senior in mechanical engineering. “We’re not done. We’ll make competition for sure, but we want to test it a lot. … In no way can we slow down.”

On the second build day of the semester, the shop is humming. Every table, component, part and laptop has a dozen student engineers clustered around it.

Formula SAE is a student design competition organized by the International Society of Automotive Engineers. Competitors are expected to operate as car manufacturers. They have to master all aspects of business: research, design, manufacturing, testing, developing, marketing, management and fundraising.

The concept behind the competition is that a fictional manufacturing company has contracted a design team to develop a small Formula-style race car. The prototype is to be evaluated for its potential as a production item. The target consumer is the non-professional weekend autocross racer. Each team designs, builds and tests a prototype based on a series of rules. 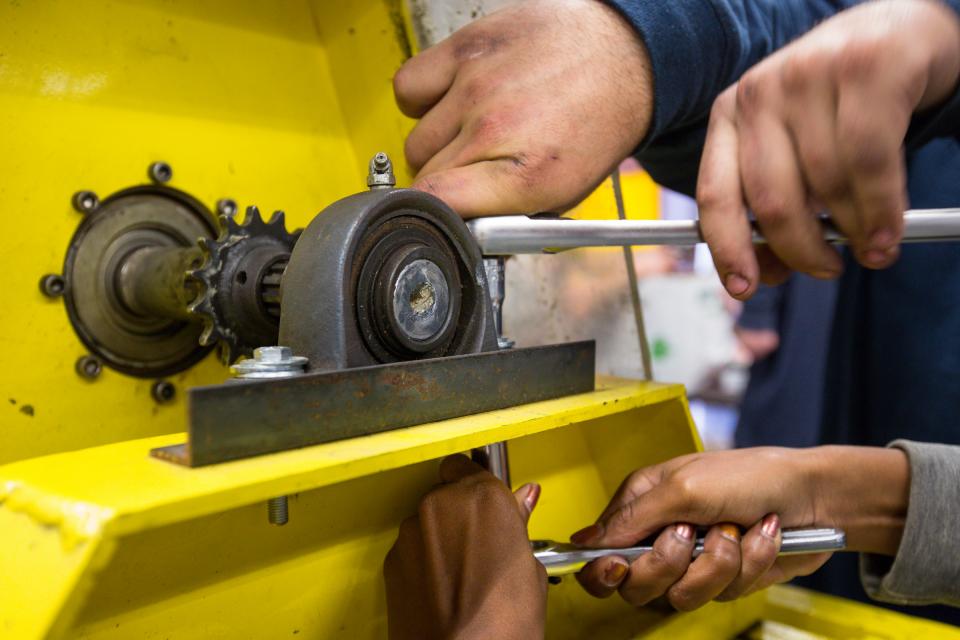 Junior Abraham Sharaf (top) and sophomore Algelia Burton — both majoring in mechanical engineering — tighten the new engine on the dynamometer on Jan. 23 on the Tempe campus. The dynamometer measures the torque and power output. Photo by Charlie Leight/ASU Now

As of late last month, the chassis — a huge project in itself — is finished. The control arms were being welded. The wheels were being assembled.

“From there on out it’s just parts coming together,” said team captain Pranav Mamidi, a senior in mechanical engineering.

When the Sun Devil Motorsports 16 is done in mid-February, it won’t look pretty — the nose cone won’t be on, for example — but it’ll be track-ready for testing. The aesthetic crunch will come later, as the team preps for a possible appearance at the Indy car races in Phoenix in April.

The team is trying to get a presence at Phoenix International Raceway on April 2. They’ve asked for a booth in the vendor section (a $20,000-$30,000 value) or — even better — a lap around the track as the pace car in front of thousands of TV eyeballs.

“We’ll get something,” said team manager Troy Buhr, a junior in mechanical engineering. The pace-car lap might be tricky. “They said we have to be insured. I have no idea how to do that,” he said. “I’m not really experienced with insurance.”

Contributions from sponsors are popping up. Team members are meeting with Hexcel — a materials company that makes carbon fiber and composite materials for aerospace, defense, wind energy and other markets — for sponsorship in mid-February. Hexcel will provide thousands of dollars in carbon fiber parts.

“That’s been confirmed, so we’re excited about that,” Buhr said.

Another contribution was brake calipers from Brembo Brakes, the manufacturer of brakes used by Porsche and other automotive companies.

They bought pedals, a steering rack, steering column, tires and a Taylor differential.

Tires are an issue. The team needs sets of wet tires (for driving on wet surfaces) and dry tires. They need a few sets, at a cost of about $1,400 per set. The tires are soft rubber, like climbing shoes. They grip really well, but they also last about 28 minutes on the track. During cornering and driving, the rubber spreads out to the edge of the tire, and eventually it loses its grip. 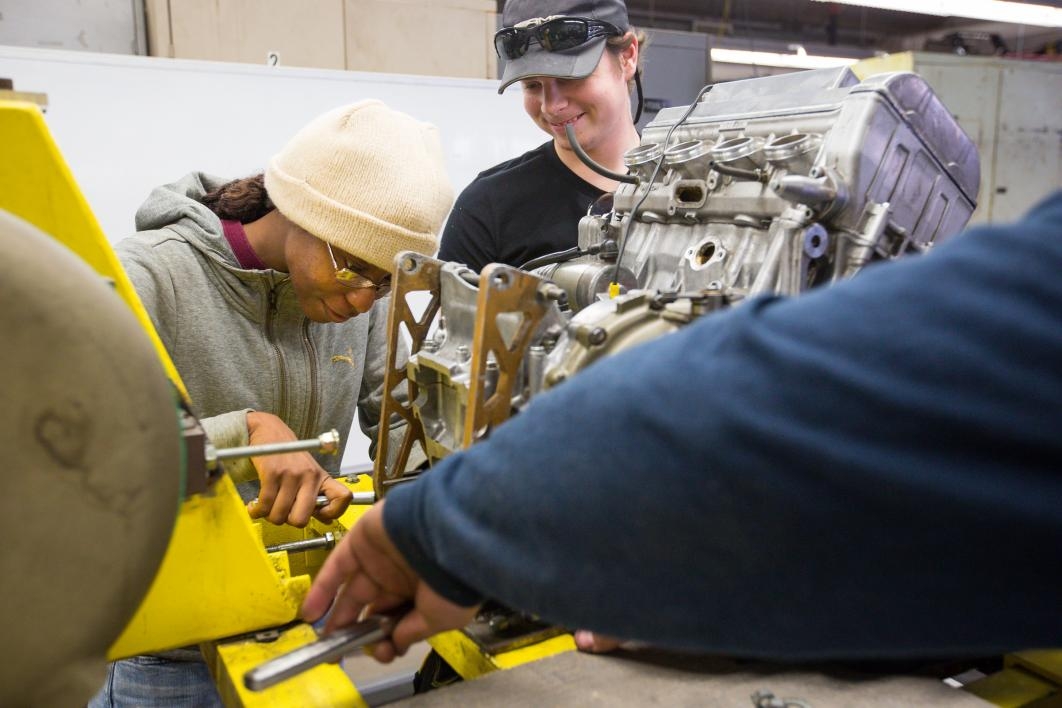 Alex Edson (center) watches Algelia Burton as she and Abraham Sharaf tighten the new engine on the dynamometer on Jan. 23. Edson is a senior in aerospace engineering, Burton is a sophomore and Aharaf a junior, both in mechanical engineering. 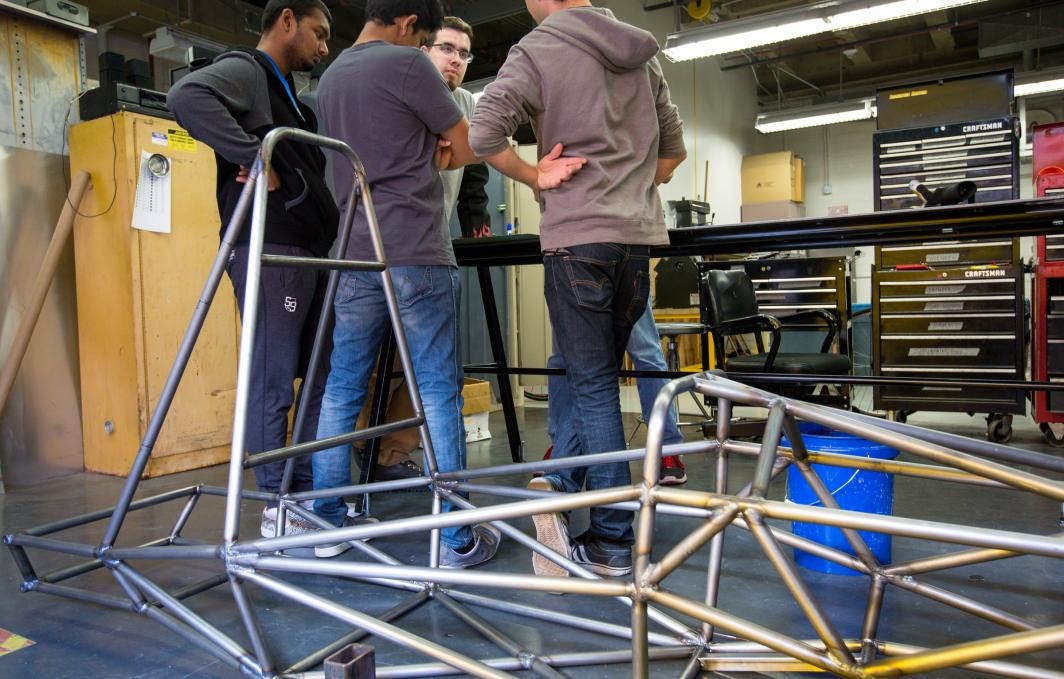 Arik Jacobson (second on the right) listens to others as they prepare to fit the engine in the chassis on Jan. 23. With the chassis about finished, emphasis was changing to the engine and soon suspension. Jacobson is a sophomore in automotive engineering. 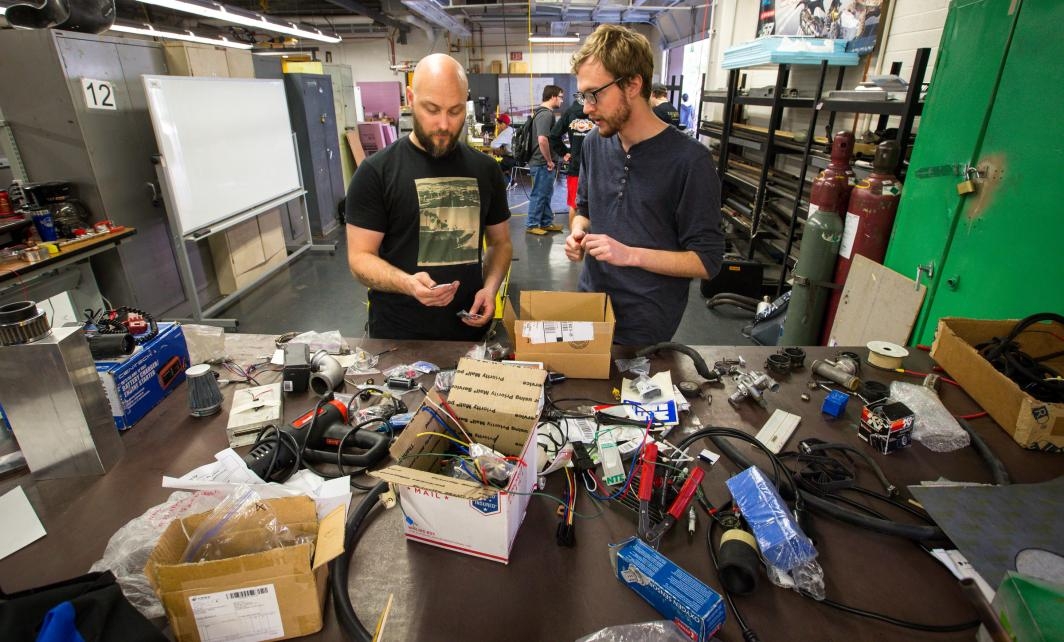 The engine team's Michael Conard (left) and Andrew Shapiro reorganize the parts they'll need and discard the non-essential pieces on Jan. 23. The two are seniors in mechanical engineering, and Conard just accepted a job offer from Ford working on research and advanced engineering. 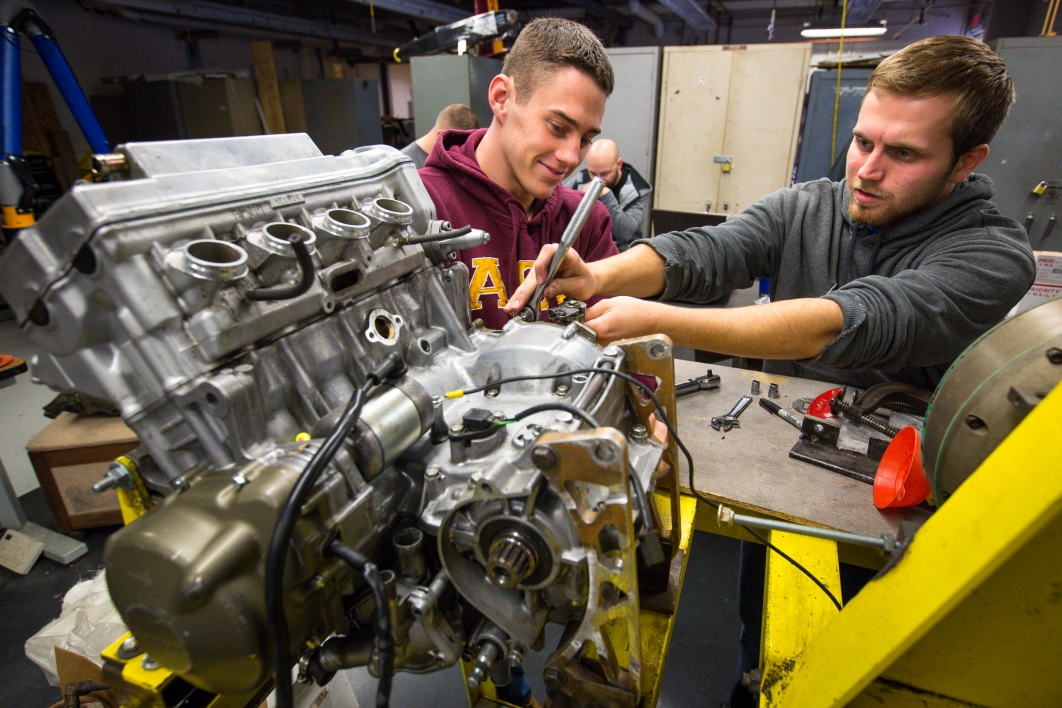 Carlton Peterson (left) watches Andrew Chard secure the cover plate to the clutch assembly on the ASU Formula SAE team's transmission. They are adapting a Honda CBR 600 cc street bike engine for the car. Peterson is a sophomore in computer systems engineering, and Chard is a sophomore in mechanical engineering. 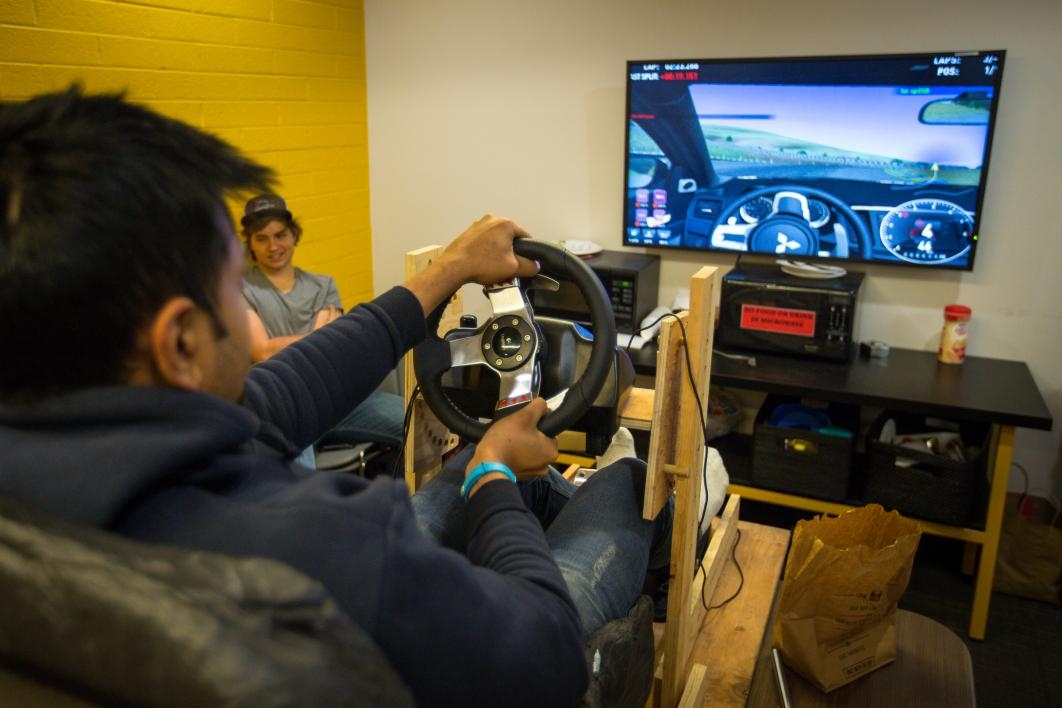 Mechanical engineering grad student Abir Deb takes a turn on the ergonomic set-up for the Sim Raceway video game Jan. 23. Though he's driving a Mitsubishi Evo in this shot, the game features a Formula SAE car designed by the University of California, Berkeley, that the Sun Devil team hopes to use to help fine-tune their driving skills. 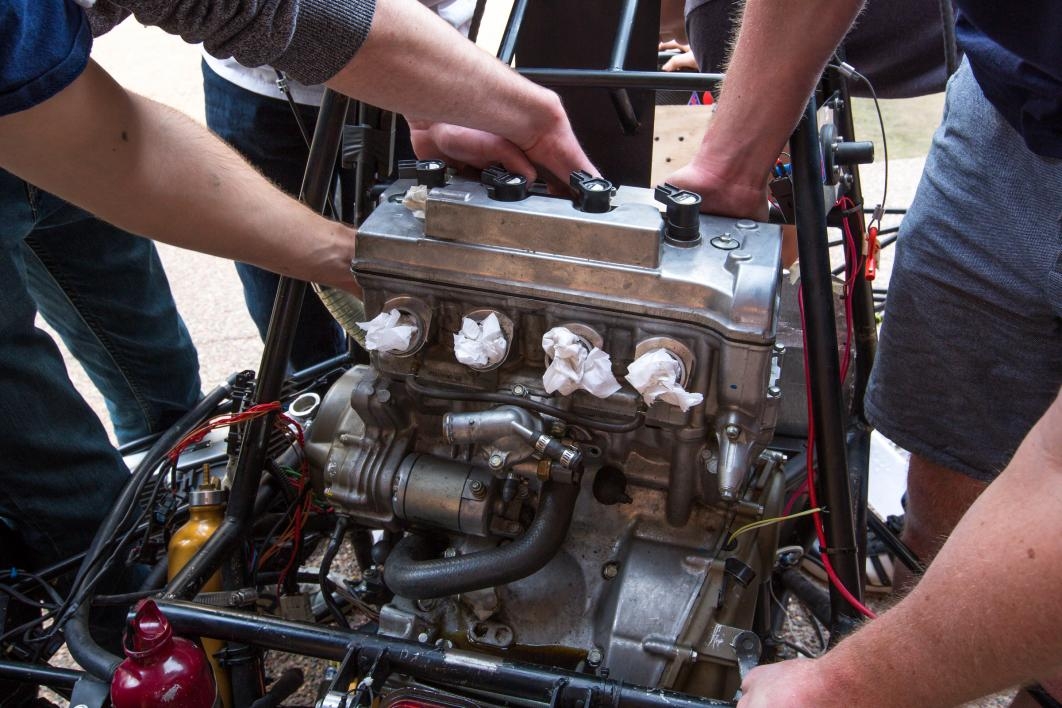 Members of the engine team remove the old power plant from last year's car, to get accurate measurements for mounting an identical engine on the new chassis Jan. 23. The automotive team hopes to have the car on the track in a month for preliminary tests.

“We’re going to go through a lot of them,” Kudela said.

Documentation and transportation to the competition in Lincoln, Nebraska, are also on their minds. The team is also looking for a tour bus so the group can travel together. Last year team members traveled separately.

They are starting the process for the cost and design reports, which are as crucial in this competition as the car itself.

“After Christmas we got a good start,” Kudela said.

Testing will be done in Phoenix at the Bondurant School of High Performance Driving. Everyone will get to drive the car — at least during testing — because everyone worked on it.

Michael Conard, a senior majoring in mechanical engineering, is the engine team lead. The car’s powerhouse is a Honda CBR 600 cc street bike engine, which was donated to the club years ago.

They are building the intake manifold, exhaust manifold and a few other parts. The intake manifolds will be 3-D-printed out of nylon by a local company called Phoenix Analysis & Design Technologies. Local companies Boost Junkyz Metal Fabrication and Locash Racing have been offering technical advice to the team.

“For the competition we have to restrict the air coming into the engine, so we had to design a restrictor for the manifold,” Conard said. “Hopefully our design will get the maximum flow of air we can. With the engine you want to get as much as possible. … We hope to get as much performance out of it as possible.” 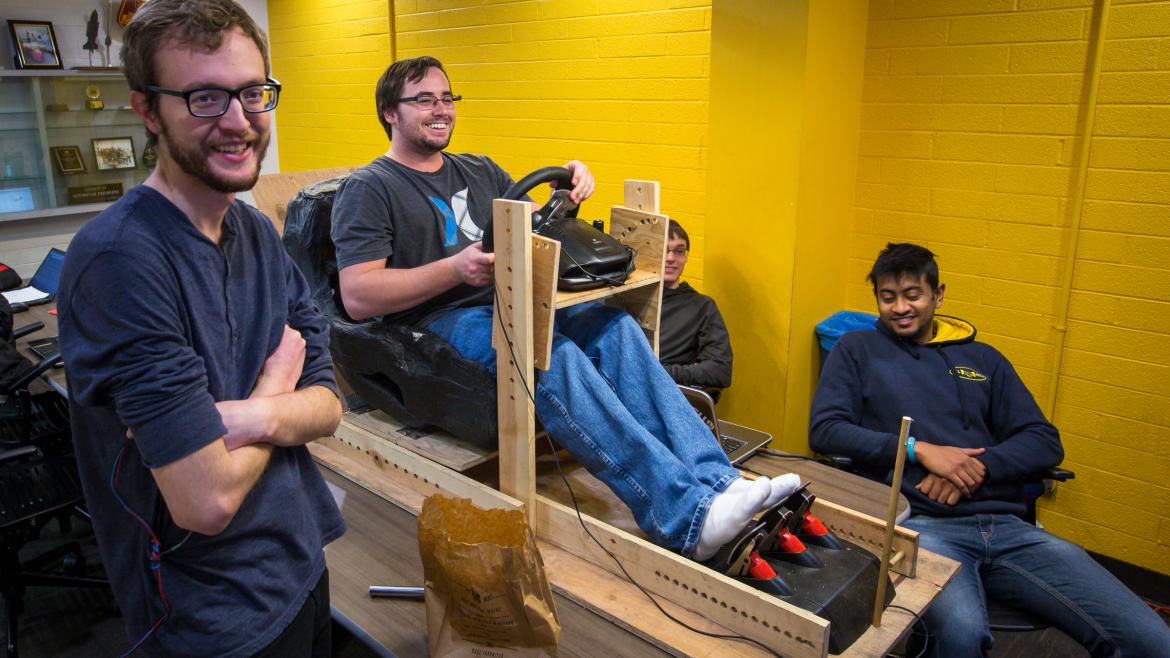 Nick Baker takes a turn on the set-up for the
Sim Raceway video game — used to fine-tune
driving skills — as Andrew Shapiro (left)
and Abir Deb watch on Jan. 23.

Per the rules, the engine team is restricted to a one-inch inlet, which will bring the performance down from the factory standard, according to Conard.

“We’ve tried to get the best design we can to get the biggest advantage we can,” he said. “It’s nice to see a design come to fruition and see it perform.”

It’s Conard’s second year in the club. “It gives a lot of hands-on,” he said.

Conard has had his hands on engines since he was a little kid, when he rebuilt engines and worked on cars with his father.

“When I was a kid he told me I couldn’t be a mechanic, so I became an engineer,” Conard said.

And a successful engineer at that. This week Conard just accepted an offer from Ford working on research and advanced engineering.

To support the ASU Formula SAE team, click here, then select the “write-in” circle in the “supporting” category and enter the following in the box: "ASU-Society of Automotive Engineers 30006731."

Dec. 17: No brake: ASU team powers through to edge closer to race car 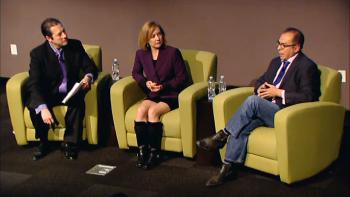