Spreading the message on big data

Tempe campus
Worried about big data tracking your life? This public conversation can help.
Find out how corporations are making money from your data.
January 29, 2016

“Big data” sounds like it could be a pretty boring topic, maybe not something you want to bring up during a dinner party.

But the intrigue builds when you discover that corporations are making money off the data you create while grocery shopping, applying for a home loan or casually strolling through the mall, transforming our everyday activities into "invisible labor" for them. It’s part of the “big data” construct, a virtual representation of your movements, interests and interactions tied to purchases and the use of our many smart devices.

In an effort to inform the public about big data and how it’s used, Arizona State University’s Human Security Collaboratory is hosting a series of “Critical Conversations” about human security research and impact activities. The first of these free, public conversations, “(Un) Corporal Technologies: How Data, Algorithms and Interfaces Rub Up Against the Body,” is from 11:30 a.m. to 1 p.m. Feb. 1, in room 492 of Interdisciplinary Science and Technology Building 4 (ISTB4), on the Tempe campus.

While new technologies and devices have shaped and redefined our world, not all of it is for the better. The information shed from your devices and personal computer can also be detrimental — it can prevent a person from getting a job, a house or vital medical coverage — all because your data is packaged and sold to corporations who may be using your personal data for very different purposes.

“The legal world has yet to catch up with what our digital tools are doing in our everyday lives in regards to Digital Civil Rights,” said Jacqueline Wernimont, a professor in the Department of English and co-founder of ASU’s recently formed Human Security Collaboratory.

“Everyday technology puts you at risk because the information is shared and sold, and has a much bigger impact than most people realize.”

Launched by the Global Security InitiativeThe Global Security Initiative (GSI) is a university-wide interdisciplinary hub for global security research that focuses on openness, inclusiveness and connections to the global defense, development and diplomacy communities. The initiative addresses emerging global challenges characterized by complex interdependencies and conﬂicting objectives, where there may not be obvious solutions. GSI also serves as ASU’s primary interface to the Department of Defense and the Intelligence Community and ASURE (ASU Research Enterprise), an off-campus research facility., the Human Security Collaboratory is focused on addressing complex problems affecting the security of individuals and communities, with a special emphasis on digital technologies and their uses.

“So how do we start to engage the public to make them not only understand what it means, but also how it can be meaningful for them?”

Last semester, Wernimont and Rajko presented “Vibrant Lives and Data Archives,” a performance installation that demonstrated the concept of personal “data shed” by providing an experience in which the data could be seen, heard and felt.

Data shed refers to the nearly 3.5 million bytes of data produced per person, per day. The data is unique to each person because it is derived from things like smartphone apps or wearable fitness devices that record a person’s behavior and data. It sounds relatively innocuous until Wernimont cites a few examples.

“If you’re at the mall with your iPhone or Android in your pocket with the Bluetooth on, it is possible to track what stores you've visited and for how long,” Wernimont said. “Or, let’s say you’re a recruiter searching for potential employees on a job website and put in certain parameters and lo and behold, there’s nothing but male candidates for the job. Well, that's potentially the result of algorithms that are favoring a certain community and that's illegal. Similarly, we see the phenomenon of reverse redlining, which has leveraged everyday information to target people for subprime loans.”

And that discount card you use at the grocery store that entitles you to some pretty smokin’ deals? Rest assured the corporation who owns the grocer is not only using it to track consumer behavior, but is probably selling the data to others and getting their money back tenfold.

Which is why the collaborative is engaging ASU faculty and researchers with its series of lunchtime conversation.

“What we’re doing is finding as many different ways as possible to meet the average person where they are in terms of knowledge about their data shed,” said Rajko, who said the collaborative will also host lab sessions, host a personal data and wearable-devices charette and present its work at an international retreat.

“These are all creative strategies to understand and address these topics because our goal is to be proactive rather than reactive.”

Arizona PBS honors Black History Month with a collection of new commemorative programs and digital content highlighting the impact African-Americans have made on U.S. history, beginning Feb. 1.As part of its yearlong commitment to diverse programming, Arizona PBS presents a monthlong lineup of programs in February emphasizing the struggles, victories and contributions African-Americans have made t...

Tempe campus , School of Film, Dance and Theatre , Arts , Herberger Institute for Design and the Arts

The College of Liberal Arts and Sciences , Employee , Research , Environment

As part of its yearlong commitment to diverse programming, Arizona PBS presents a monthlong lineup of programs in February emphasizing the struggles, victories and contributions African-Americans have made to modern culture, and the inspiring evolution of African-American society, through stirring documentaries and in-depth explorations of the lives and legacies of celebrated African-American leaders. 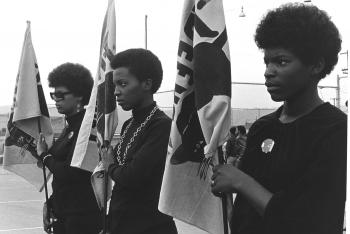 Independent Lens' "Black Panthers: Vanguard of the Revolution" is one of many documentaries and profiles featured on-air and online on Arizona PBS in honor of Black History Month 2016. Download Full Image

Highlights of this year’s programming include “Black Panthers: Vanguard of the Revolution,” which tells the story behind a key component of the revolutionary culture within the civil rights movement, and “B.B. King: The Life of Riley,” which celebrates the enduring legacy of the late musician and the lasting effects his work has had on the music scene.

“This year’s Black History Month lineup features a rich collection of programs that emphasize the many ways African-Americans have helped shape modern American culture,” said Nancy Southgate, associate general manager of content at Arizona PBS. “We’re pleased to shine a spotlight on these individuals and organizations whose inspiring and enlightening stories created such a meaningful impact on society.”

Misty Copeland made history by becoming the first African-American principal dancer with the prestigious American Ballet Theatre, considered the pinnacle of ballet in the U.S. This documentary provides an intimate look at this groundbreaking artist as she shatters barriers and transcends her art.

Whitney Young was one of the most powerful, controversial and largely forgotten leaders of the civil rights movement, who took the fight directly to the powerful white elite, gaining allies in business and government, including three presidents.

Revisit the turbulent 1960s, when a revolutionary culture emerged with the Black Panther Party at its vanguard. Stanley Nelson tells the vibrant story of a pivotal movement that feels timely all over again.

In an all-star tribute, the Smithsonian pays tribute to the life and career of beloved musician Ray Charles live from the White House.

Discover how Fats Domino’s brand of New Orleans rhythm and blues became rock and roll. As popular in the 1950s as Elvis Presley, Domino suffered degradations in the pre-civil-rights South and aided integration through his influential music.

Explore the life, work and philosophies of Zora Neale Hurston, a celebrated figure of the Harlem Renaissance who is remembered for her 1937 masterwork, “Their Eyes Were Watching God.” This special concentrates on her very productive, but often overlooked, final decade. Interviews with Hurston experts and colleagues, letters from Hurston, and archival photographs piece together this fascinating chapter in the life of an American literary icon.

This series tells the definitive story of the civil rights era from the point of view of the ordinary men and women whose extraordinary actions launched a movement. Winner of numerous Emmy Awards, a George Foster Peabody Award, an International Documentary Award, and a Television Critics Association Award, it is the most critically acclaimed documentary on civil rights in America.

Follow the story of Swedish researcher Gunnar Myrdal whose landmark 1944 study, “An American Dilemma,” probed deep into the racial psyche of the U.S. The film weaves a narrative that exposes some of the potential underlying causes of racial biases still rooted in America’s systems and institutions today.

Examine research that suggests we humans are a patchwork species of hybrids. Around 200,000 years ago, a new species, Homo sapiens, appeared on the African landscape. DNA from a 19th-century African-American slave is forcing geneticists to re-think the origins of our species. The theory is that our ancestors met, mated and hybridized with other human types in Africa — creating ever greater diversity within our species.

This documentary explores the impact of the Amistad mutiny and the repatriation of Africans to their homes in Sierra Leone. Renowned Harvard scholar Henry Louis Gates Jr. calls the film “of great interest to any student of slavery and the slave trade.”

American Masters | August Wilson: The Ground on Which I Stand
8 pm. Saturday, Feb. 6

Hear the enlightening story of Tchinda, a woman from a small Cape Verdean island off the west coast of Africa, whose life changed forever when she came out as transgender in her town’s local newspaper. Explore her struggles and triumphs as she navigates discrimination and finds acceptance.

Meet kung fu’s black pioneers who helped bridge the gap between African-American and Asian cultures and gave birth to the rise of black kung fu artists. Discover how these pioneers broke down racial barriers and became respected masters in a subculture primarily dominated by Chinese and white men.

Whitney Young was one of the most powerful, controversial and largely forgotten leaders of the civil rights movement, who took the fight directly to the powerful white elite, gaining allies in business and government, including three presidents.

Watch the highlights of boxing legend Muhammad Ali’s life and career, from his boyhood in Louisville, Kentucky to his stunning upset of Sonny Liston, his exile from boxing for refusing induction into the U.S. Army to his epic, triumphant comeback.

Additional programming information and airtimes can be found on the Arizona PBS online schedule at www.azpbs.org/schedule.

The following is a sample of the more than 30 programs available for online streaming on the PBS Black Culture Connection in February:

Arizona PBS also invites educators, parents and students to visit the PBS LearningMedia website, which offers a range of curriculum-targeted resources that support lessons on black history and spotlight the leaders, thinkers and innovators who helped shape our nation’s history. Searchable by standard and keyword, PBS LearningMedia helps teachers to promote inquiry in their classrooms and strengthen students’ personal connection to black history and culture through discussion questions, worksheets, videos and digitized primary sources.

For more information on PBS LearningMedia, including how to integrate these resources in your school, contact Kimberly Flack at kimberly.flack@asu.edu, 602-496-3764 or visit az.pbslearningmedia.org.