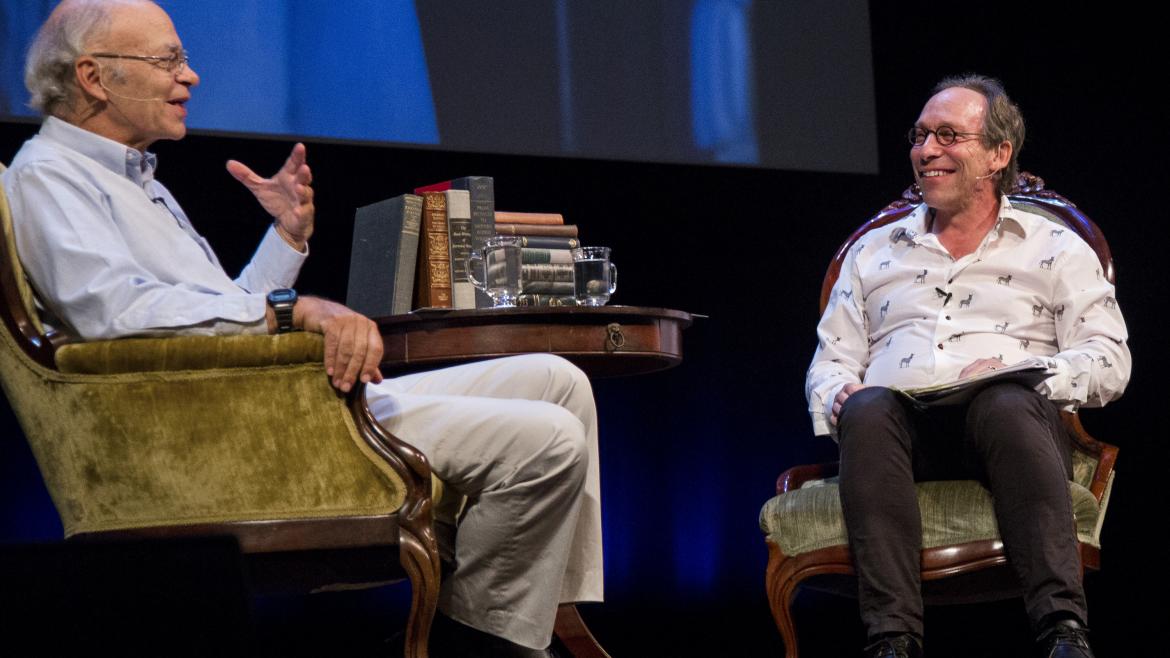 Rarified air: Do you have an Erdos-Bacon-Sabbath number?

Tempe campus
Erdos-Bacon-what? You may never have heard of this list, but ASU prof is on it.
EBS numbers show people's interactions across spectrum of science and culture.
Six degrees of ... well, pretty much anything: ASU prof's EBS score on the rise.
January 26, 2016

ASU's Lawrence Krauss on short list of those whose reach crosses culture lines of science, movies and music — and his score is rising

Yeah, there’s the Nobel Prize. That’s great. Eight hundred and seventy people have one. Olympic gold medals? Thousands out there. Oscars? Who cares?

To be amongst the truly exclusive, to be in a group numbering only in the double digits, you need to have an Erdos-Bacon-Sabbath number. One faculty member at Arizona State University stands proudly with this group.

But first — Erdos-Bacon-whatsit? It’s a score made up of connections with three people/entities.

Paul Erdos was a legendary mathematician who wrote more papers than anyone else in history — more than 1,500. Described in his New York Times obituary as “a mathematical pilgrim with no home and no job,” Erdos was famous for appearing on colleagues’ doorsteps, staying for a few days working on a paper, and then disappearing.

Most people have heard of Six Degrees of Kevin Bacon. The prolific actor once claimed in an interview he’d either been in a movie with everyone in Hollywood or someone who had worked with them. The comment morphed into a parlor game for movie buffs connecting actors to Bacon.

No one has a three.

And so does ASU’s Lawrence Krauss, a theoretical physicist and cosmologist, Foundation Professor of the School of Earth and Space ExplorationThe School of Earth and Space Exploration is a unit of ASU's College of Liberal Arts and Sciences., director of ASU’s Origins Project, and the only physicist to have received awards from all three major American physics societies.

“It made my day,” Krauss said. “I’m very happy about it. … Any time I can be sandwiched between Lisa Kudrow and Stephen Hawking — not literally, but metaphorically — it’s a good thing.” 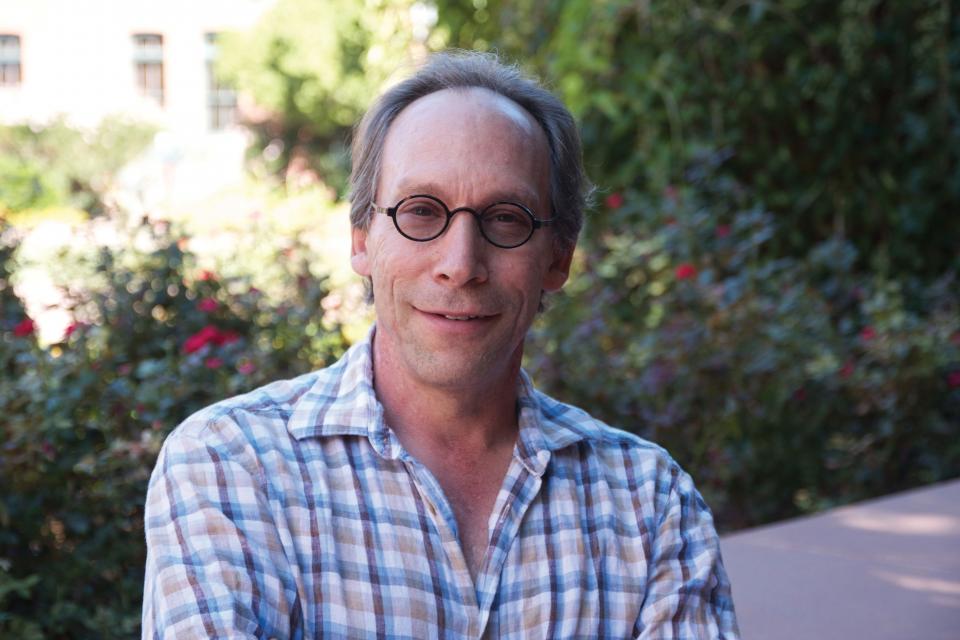 ASU professor Lawrence Krauss what he enjoys about the Erdos-Bacon-Sabbath numbers — beyond the amusement factor — is that they show when someone has had interactions across many fields. Photos by Jena Sprau and (top) Tessa Menken/ASU

Krauss’ resume is 33 pages long. Where does having an EBS number stand in his long list of accomplishments?

“I’d put it way up there,” he said. “I think it’s nice because, besides the amusement factor — which is a big part of it — to be a little more serious, their idea is it represents people who have interactions across the spectrum of culture and science. That’s what I love to do. So it’s nice in that sense that I’m included. That and the fact I know my EBS is lower than they said, which is good.”

For his Sabbath number of 6, Krauss narrated Holst’s “The Planets” performed by the Cleveland Orchestra. The orchestra at one point played "Gamelan D’Drum," a 35-minute composition for world percussion written by Police drummer Stewart Copeland. Naturally, Copeland played with bandmate Sting in the Police. Sting sang backup vocals on a song on Phil Collins’ album “Take Me Home.” In 2002 (are you exhausted yet?), Collins performed “Paranoid” with Black Sabbath at Buckingham Palace during Queen Elizabeth II's Golden Jubilee.

But wait! Krauss is on the rise!

One of Krauss’ collaborators directly co-wrote a paper with Erdos. That brings Krauss’s Erdos number down to 2. He has an upcoming project with someone who has played with Black Sabbath or a member of Black Sabbath, which will bring his Sabbath number to 2. When that happens, Krauss, with a 7, will pass the inner circle of EBS number holders — those with an eight.

Only three people have an eight: Stephen Hawking; author, inventor, and futurist Ray Kurzweil; and Daniel Levitin, a professor of psychology and behavioral neuroscience at McGill University.

“I think I can be up there with those guys,” Krauss said. “That’ll be interesting. … If it really is true, I’d be very happy to have the lowest EBS number, along with Stephen and Daniel Levitin. Stephen’s a good friend.”

“It made my day. … Any time I can be sandwiched between Lisa Kudrow and Stephen Hawking — not literally, but metaphorically — it’s a good thing.”
— ASU theoretical physicist and cosmologist Lawrence Krauss

The Erdos-Bacon-Sabbath Project was created by Sean O’Connor, a self-described middle-aged science geek living in San Diego, and Ross Churchley, a graduate student at Simon Fraser University in Vancouver, British Columbia, whose research field is graph theory, the mathematical study of networks.

O’Connor writes an eclectic science-related blog called Timeblimp. He published an article about EBS on his blog sometime in the mid-2000s.

“It's actually been so long ago that I don't remember precisely what made us think of the idea,” O’Connor said. “On my Timeblimp blog I try to write interesting educational articles, topics that I think are really cool but you don't hear about much. I think I was researching an article about Erdos-Bacon numbers (which existed before Ross and I started this), and I had been aware of Six Degrees of Sabbath for a while before that.

“At the same time (or perhaps earlier — we don't bother with accurate historical records), Ross came up with the idea, and somehow we found each other. He was an undergrad in college at the time, I didn't have kids yet, so we had plenty of time to do research and track down potential links. I had maintained an initial list at timeblimp.com, but Ross really pushed the idea to what is today, and essentially deserves all the credit for the attention that the EBS idea has gotten.”

Churchley started the EBS Project website in 2012, after English musician and physicist Brian Cox tweeted about Churchley’s discovery of his EBS number. He received so many suggestions for new EBS numbers that he decided to put them all in one place.

“I enjoy looking for EBS numbers as a game, like a sort of Internet scavenger hunt,” Churchley said. “Finding one can be a fun way to pass the time in between thesis revisions. However, there are also interesting research questions one can ask about the mathematical structure of social networks, and I'd love to study the collaboration graphs in more depth someday.”

Verifying an EBS number requires a lot of tedious cross-checking of publications, and sometimes getting fooled by same-name-different-person in a co-author list, according to O’Connor.

“Once you piece a solid chain of links together, though, it's a great feeling — a feeling of having accomplished something obscure that doesn't really matter for anything in the real world, but it's damn fun,” he said.

“We haven't yet found the trail of collaborations to prove it,” he said.

“Kool Moe Dee (the old-school rapper) and Dolph Lundgren (the Russian from ‘Rocky IV’) both are potential members, if I ever can find the time to prove them,” O’Connor said. “The bar for achieving all three numbers is so high, you wind up with a list of such amazing people.  We've talked about how cool it would be to get them all together at a dinner party — I'd feel quite inadequate to be in the company of all these geniuses, but how much fun would that be?”

Krauss agreed. “That’s great,” he said. “They should have a party for all of us.”

Churchley has heard from many people on the list, most trying to find shorter collaboration paths to help improve their own numbers. He has also heard from people who discovered their own EBS number and were added to the list after contacting him.

Finding new EBS numbers is a collaborative effort between Churchley and O’Connor and visitors to the project.

“I've discovered a few Erdos numbers to help those efforts, as well as finding citations for the collaboration links,” Churchleysaid.

Churchley has poured a ton of work into the site, O’Connor said.

“I have a couple to my credit, but Ross (and a few other early devotees) had the patience to sift through publication databases to find rock-solid links for candidates,” he said. “I'm better at the snarky jokes and sarcasm than I am at the painstaking research.”

O’Connor said more people have read the list than have read his professional publications.

“It’s such a completely-pointless-but-ridiculously-fun endeavor, that I think I'm more proud of it than anything I've actually accomplished in real science,” he said.

Find the full list at erdosbaconsabbath.com. To suggest new EBS members or improve connections for existing members, bug O’Connor at timeblimp.com or on Twitter at @timeblimp or @ErdBacSab (the official Twitter for the EBS Project).

Arizona State University’s Walter Cronkite School of Journalism and Mass Communication and Arizona PBS today kick off a crowdfunding campaign to help Cronkite News students increase coverage of border and immigration issues during this election year. The Cronkite School is the first journalism program in the nation to establish a major partnership with Beacon, an innovative crowdfunding platform...

The Cronkite School is the first journalism program in the nation to establish a major partnership with Beacon, an innovative crowdfunding platform that helps national news organizations and independent journalists raise funds for reporting projects. 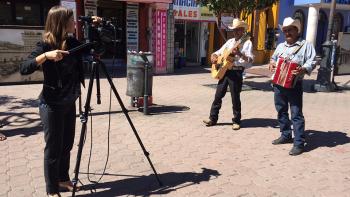 The Cronkite School and Arizona PBS are starting a crowdfunding campaign that will enable Cronkite News to send students to the border to cover immigration, security and other topics. Download Full Image

The crowdfunding campaign will enable Cronkite News, the student-produced news division of Arizona PBS, to send students to the U.S.-Mexico border and enhance the reporting tools they can use to better understand immigration, security, the economy and other issues.

“More than 15 million people live on both sides of the U.S.-Mexico border, and too often they are missing from news coverage,” said Cronkite School Dean Christopher Callahan. “We are excited to be partnering with Beacon on this project, which will equip our students with important reporting skills and provide borderlands news coverage during a year in which presidential candidates are debating these types of issues."

The 30-day crowdfunding campaign’s goal is $25,000. With every pledged dollar, Beacon will match donations if the campaign reaches its goal. People can pledge their support at the Cronkite News Beacon page.

Student journalists will produce stories that bring to light diverse political insights and perspectives and explore new ways of storytelling, using cutting-edge media and technology. The initiative is part of Cronkite News – Borderlands, where students cover border issues in English and Spanish under the guidance of award-winning professional borderlands journalists Alfredo Corchado and Angela Kocherga.

As part of the crowdfunding campaign, the Cronkite School will offer rewards to donors based on their level of support. Those include thank-you letters, insider reports from the CN-Borderlands bureau and invitations to lectures and other events.

The Cronkite School also will test and analyze which types of audiences are most likely to contribute and whether crowdfunding is a viable ongoing revenue source for student-based media. Cronkite News has received a $10,000 grant from the Institute of Nonprofit News to support this endeavor.

Launched in 2013, Beacon works with journalists and readers to fund important stories around the world. Journalists create crowdfunding pages on Beacon, detailing the reporting project, and readers decide whether to make a contribution. Crowdfunding is becoming an important revenue source for news organizations, particularly non-profit newsrooms.

“Crowdfunding for journalism works best when you combine an important issue with a trusted newsroom, willing to engage with its audience,” said Dan Fletcher, Beacon’s co-founder. “With those traits in mind, the Cronkite School is the perfect university to pioneer this project.”