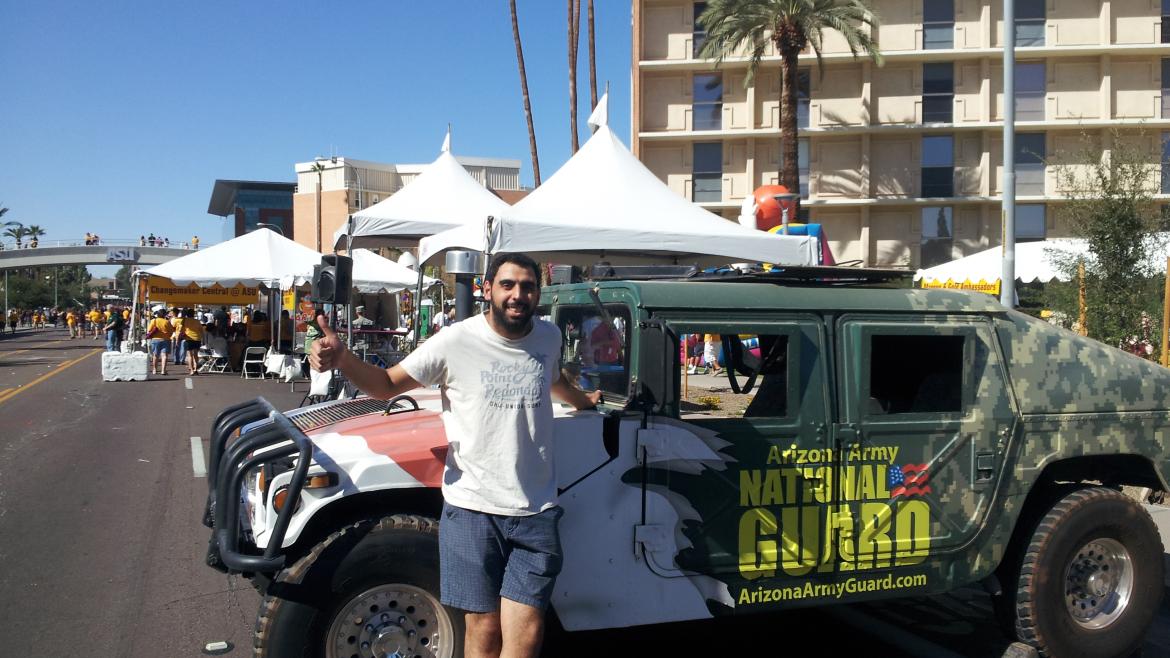 Persevering amidst war to earn degree

With help of ASU faculty and staff, Libyan student finishes his master's from half a globe away

Libyan student Abdelhamid Hamouda was, and he has fought a different kind of academic battle as a result.

Admitted to Arizona State University’s M.A. in English (linguistics) on a Fulbright Scholarship in 2012, Hamouda was forced by personal issues to return to Benghazi, Libya, a year later to be with his family. When he was ready to return to the U.S. to complete his degree, the complexities of immigration documentation in a politically unstable country blasted his plan.

“I lost my scholarship with only one semester left to get my master’s,” said Hamouda, who has since worked with the International Committee of the Red Cross (ICRC) in the war-torn region.

Unable to return to defend his thesis and complete his degree, Hamouda felt desolate. But then he reached out to his ASU advisers for help — and help was given.

Several ASU units made exceptional arrangements for Hamouda due to the uniqueness of his situation. Among them: The Department of English offered him a fellowship to cover his tuition while he completed his thesis long-distance, and Graduate Education allowed him to hold a defense via Skype.

But even those efforts were sometimes stymied; due to unexpected power outages in Libya and an intermittent Internet, Hamouda had to travel to Tunisia to get online for his defense.

“It was great to see and talk to my committee after months of communicating via sporadic email,” said Hamouda, who defended on April 13, 2015. “The committee’s questions during the defense helped me think more deeply about my thesis.”

Hamouda, whose research was on “Arabic-English Code Switching in the Egyptian Talk Show ‘Shabab Beek,’ ” had always been fascinated by how much the hosts and guests of “Shabab Beek” (“The Young Speak”) switch to English.

“While it has a long history, code switchingCode switching occurs when a speaker alternates between two or more languages or dialects during a single conversation. has probably increased lately because of the prevalence of digital devices and the ease of communication across the globe,” said Lutfi Hussein, the only Arabic speaker on Hamouda’s committee. Hussein is a resident faculty member at Mesa Community College and an ASU alum. “Arabic, spoken by close to 300 million people in more than 20 countries, is in direct contact with English, the leading global language in business, education, and communication.

“Since the phenomenon of English-Arabic code switching is likely to increase as more speakers of both languages communicate, Hamouda’s research findings help explain current practices and inform future research in this important linguistic area.”

ASU English linguistics faculty member Matthew Prior also served on Hamouda’s committee. Prior believes that the topic of code switching has relevance in helping bridge Arabic and Western cultures.

“Hamouda’s thesis contributes to a better understanding of the rich diversity of contemporary code switching within the Arabic-speaking world,” he said. “By examining Arabic-English code switching on a popular Egyptian talk show, he helps us recognize how conversational code switching can become part of a public performance for an audience.”

But code switching was not Hamouda’s first choice for his thesis topic. He had already conducted six months of research at ASU on the relationship between language, identity and sexuality in Arab culture.

“When I returned to Libya, I found that my idea was too ambitious for the Libyan context to accept. Thus, I decided not to start my academic career by working on such a sensitive and controversial topic out of respect for my culture,” Hamouda said.

“What impressed me about Mr. Hamouda was his flexibility and his ability to keep on track in circumstances that would have stopped others,” said Karen Adams, a professor of English linguistics and Hamouda’s thesis chair.

“He had to adjust his topic, which meant additional background preparation as well as locating an innovative data source for his research. He did all of this in a context where Internet connections were not reliable and where he needed to be traveling for his work.”

Amid all the recent strife and troubles facing his country, Hamouda — who grew up in Alexandria, Egypt — loves Libya, especially Benghazi, where he resides.

“I love the breadth and diversity of the Libyan terrain,” he said. “Libya has the longest coast on the Mediterranean (about 1,900 kilometers), mountain ranges including the Green Mountain in the east and the Naffoussa/Western Mountain in the west, and beautiful desert with oases and lakes.”

Hamouda loves to read and play soccer and mostly enjoys walking along the beautiful beaches of Benghazi with his friends and family.

“What I love about Benghazi is the beach, but mostly the people. Benghazi has this beautiful fabric of population from all over Libya. Despite being the second-largest urban center in the country, Benghazi retains a combination of urban life and country life (as in people still know their neighbors very well, check on them, and exchange respects and congratulations). I would call the people of Benghazi, ‘homies.’ ”

During his ASU days, Hamouda felt privileged to study with some of the finest linguists in the world and also took advantage of the wide variety of activities offered by ASU’s student organizations.

“I especially enjoyed events by the Coalition of International Students such as international night and trips,” he said. “I went with them on a trip to the Grand Canyon and another to Disneyland.”

Hamouda’s work with the ICRC — which helps to alleviate sufferings of vulnerable people as they go through the hardships of having to flee their homes — has been gratifying. His duties include visits to displaced-person shelters to identify needs, and with his supervisor, helping to plan distribution of relief items to families. According to the Internal Displacement Monitoring Center (IDMC), there are about 434,000 internally displaced persons across Libya as of July 2015, from many towns and cities such as Benghazi, Derna, Tawergha and Sirte.

“I plan to apply for a teaching position at the University of Benghazi,” said Hamouda, who wants to pursue a Ph.D. “Right now the university is closed due to the fighting, so I will apply once the university resumes activities.”

Hamouda credits both his personal faith as well as ASU staff and faculty for helping him navigate this challenge.

“I could not emphasize enough how grateful I am to the entire ASU community for standing by me and helping me finish my studies.”

Lexie Kruse, a Master of Trumpet Performance student in the School of Music, recently received first place in the brass soloist division of the Music Teachers National Association Southwest Division competition."I am honored to have advanced to the final level of the solo competition," says Kruse. "I feel a step closer to being a professional trumpet soloist, which is one of my long-term goa...

"I am honored to have advanced to the final level of the solo competition," says Kruse. "I feel a step closer to being a professional trumpet soloist, which is one of my long-term goals as a musician. Also, I am so fortunate to study with Professor David Hickman, who continues to be such an inspiration to so many students." 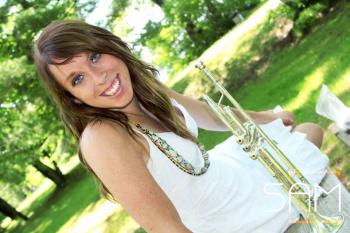 Kruse will head to the national finals, which will take place in San Antonio during the MTNA National Conference in April 2016.

"I am most looking forward to performing my competition pieces, the "Telemann Trumpet Concerto in D Major" and the "Trumpet Concerto" by Robert Planel. I have been giving master classes at schools around the Phoenix area, and performing the pieces at least twice a week helps me learn how to handle my nerves, play on various levels of sleep and stress, and best perform the compositions back to back."