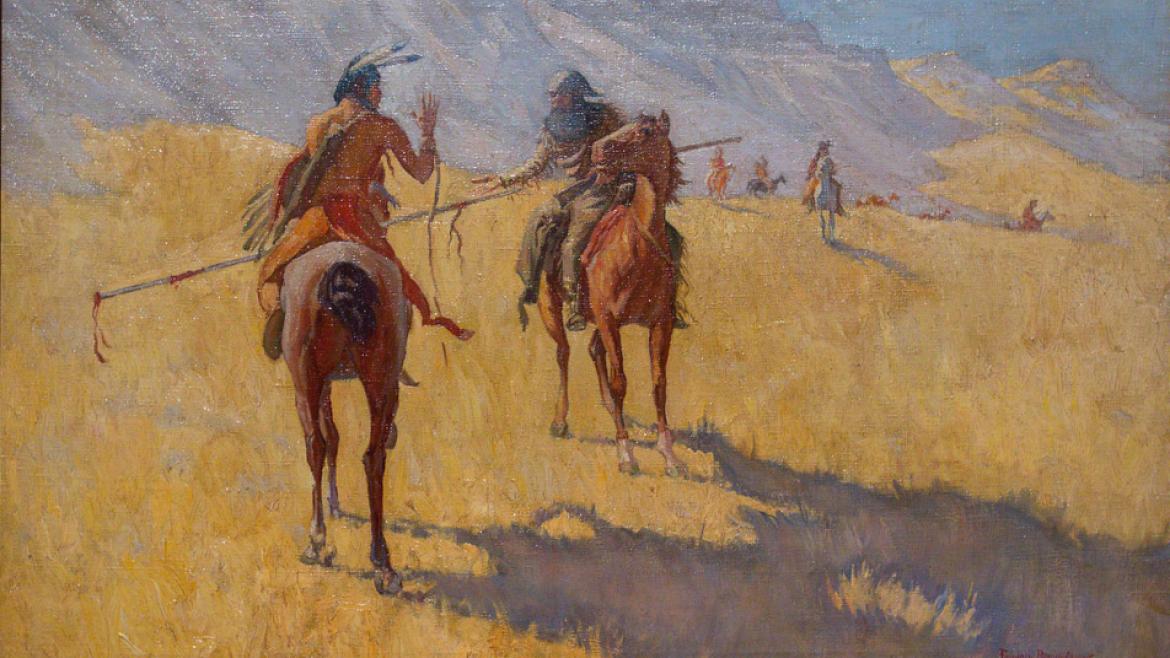 Anatomy of a fake

Tempe campus
Is it a fake, or not? ASU Art Museum examines painting in new exhibit.
Would a museum create an exhibit around a fake painting? Find out at ASU.
January 15, 2016

ASU Art Museum exhibit centered on painting's authenticity, and the culture that surrounds it

The first thing that caught the attention of Nathan Newman was the texture of the paint.

It just didn’t seem to match the mixtures used by artists during the early 1900s, when artist Frederic Remington painted “The Pioneer and the Indian,” depicting a frontiersman and Native American cautiously crossing paths.

There was also suspicion from art scholars and Remington experts questioning the authenticity of the painting at the ASU Art Museum. So Newman had to test it, and found the smoking gun.

“Titanium white paint was commonly used after 1919, and ‘The Pioneer and the Indian’ was painted after Remington’s death in 1909. This painting is an almost exact copy of [Remington’s] ‘The Parley’ whose unquestionable provenance dates securely back to its sale from Remington himself,” said Newman, a professor in ASU’s School for Engineering of Matter, Transport and Energy.

“After testing, using scientific techniques, the conclusion is fairly clear — it’s a fake.”

That painting, pictured above, is the centerpiece of a new exhibition called “Superflex: Superfake/The Parley” hosted by Arizona State University’s Art Museum in Tempe.

Taking the form of an experimental laboratory, the exhibition features new images, video and sculptural works by the Danish artist collective SUPERFLEX, which was founded in 1993 by Jakob Fenger, Rasmus Nielsen and Bjorn Christiansen.

“A lot of Swedes moved to the United States in the late 1800s, and so we have our own reference on how the Old West was represented,” said Christiansen, who flew in from Copenhagen, Denmark, for the preparation and opening of the exhibition on Jan. 9. “We don’t necessarily want to go into the history of this artist, but are very interested in the social impact Remington had as a storyteller and artist within the American genre.”

The commissioned project, presented in collaboration with professors Newman and Terry Alford in the Fulton School of Engineering and ASU’s LeRoy Eyring Center for Solid State Science, takes the painting from the ASU Art Museum’s founding Oliver B. James collection, which was attributed to Remington, a famous American Western painter, illustrator, sculptor and writer. It is used as a starting point to examine issues of authenticity, reproduction and value systems — including the emotional value of an artwork. 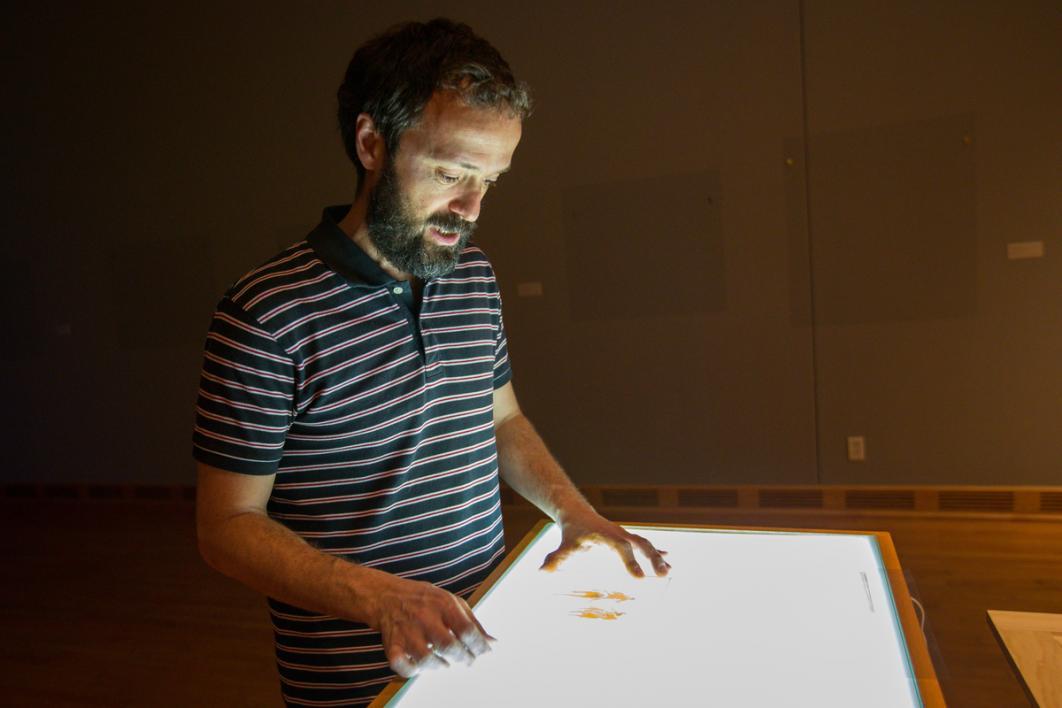 Bjorn Christiansen discusses the work that he and his fellow Danish artists set up, titled "Superflex: Superfake/The Parley," at the ASU Art Museum on Jan. 7. He overlays transparencies of Fredric Remington's famous painting, "The Parley," with the forgery now called "Pioneer and the Indian." Much of the paintings align, but the signatures are very different. 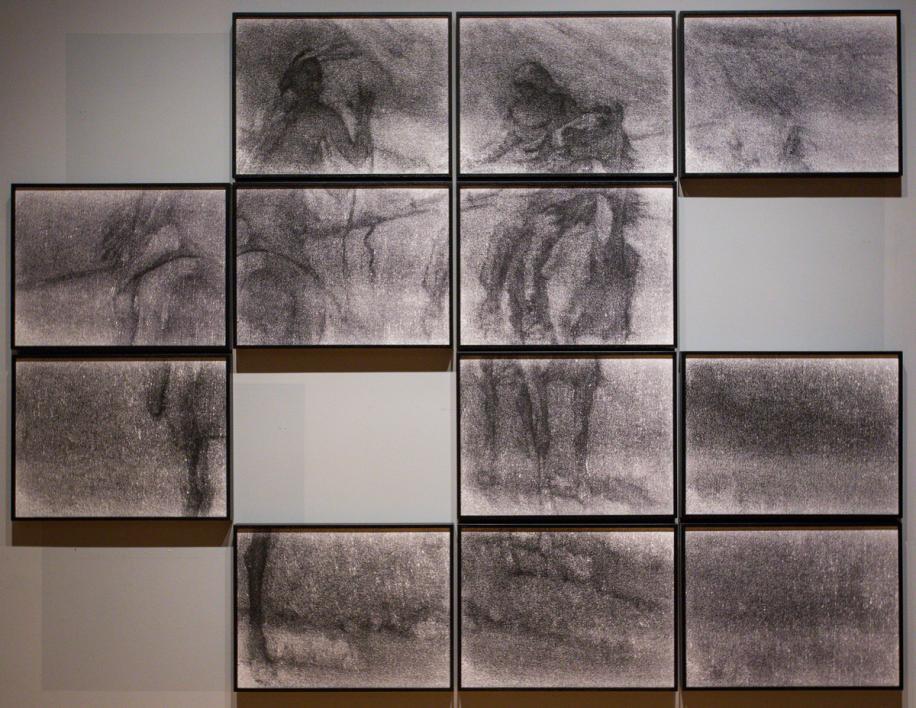 Bjorn Christiansen and his fellow Danish artists are including an infrared photograph showing underlines, which support their evidence that the forgery, now called "The Pioneer and the Indian," was projected onto canvas and copied. Bjorn Christiansen discusses the work featured in the ASU Art Museum exhibition "Superflex: Superfake/The Parley," revealing how one of Fredric Remington's famous paintings, "The Parley," has a very good forgery that has been mistaken for an original. The forgery, now called "Pioneer and the Indian," is almost identical to original Frederic Remington's "The Parley."

The process to authenticate the artwork included research methods based on three main factors: the paper trail from the artist to the owner, the opinions of experts and scientific evidence.

The paper trail started with Oliver B. James, a Phoenix attorney who bought the painting from the Chicago J.W. Young gallery around 1936. James donated the piece, known to him as “The Pioneer and the Indian,” as well as several paintings by American artists to the university in the early 1950s. The collection, which was valued at $125,000 at the time, is today worth well into the millions.

A painting of the same scene titled “The Parley” can be found at the Museum of Fine Arts, Houston. Patrons, art aficionados and curators who had seen the painting in Texas and the ASU Art Museum painting were quick to report their opinions to museum officials through written correspondence, which the exhibition also has on display.

It wasn’t as if Remington was an unknown commodity. He became a well-known artist in the mid-1880s when he began rendering Western illustrations for “Harper’s Weekly” and many other widely read New York magazines. His illustrations were highly detailed and brought visual information to the Eastern states about the colorful Old West — a bit ironic, given the nature of this exhibition.

“Art historical experts have questioned the authenticity of the ASU painting based on stylistic elements. We felt this collaboration was a good opportunity to look for physical and scientific evidence to support its authenticity (or lack thereof),” said Dana Mossman Tepper, ASU Art Museum’s chief conservator. “This blend of art and science is also a different way to engage the public about our museum and the work we do here.”

The museum recently completed construction of its new art conservation studio and is eager to undertake projects that take advantage of this new capacity.

For testing, they turned to Newman and Alford in the School for Engineering of Matter, Transport and Energy, who conducted key research to determine how the painting was constructed and the pigment content of the paint.

“Over the years our department has developed certain techniques, including infrared imaging and a particle-induced X-ray emission spectrometer, which allows us to look at sketching underneath the painting as well as identify the pigments present in the paint,” Newman said.

In addition to the presence of titanium white in the painting, Newman said infrared photography revealed a black charcoal sketch underneath. Newman said Remington did use charcoal under drawings, but more so in the beginning of his painting career, which began in 1889 — not so much by 1903. “The Parley,” Newman noted, was painted just six years before Remington’s death.

Case solved. And if life was like the Old West in Remington’s paintings, Newman might have blown the smoke off the barrel.

“We had a lot of fun with this project and hope to do more of this type work in the future.”

What: Exhibit examining the authenticity of a Frederic Remington painting.

Marvin Gonzalez, a second-year Master of Fine Arts in dramatic writing student, has been selected to participate in the acclaimed Theatre Masters Take Ten 2016: National MFA Playwrights Festival and Aspiring Playwright Competition.Gonzalez' 10-minute play, "Prostheses Bound," a story of a mans difficulty adjusting to cutting-edge myoelectric prosthetic arms, was chosen from among submiss...

Gonzalez' 10-minute play, "Prostheses Bound," a story of a mans difficulty adjusting to cutting-edge myoelectric prosthetic arms, was chosen from among submissions from the top Master of Fine Arts playwriting programs in the country. Gonzalez will represent Arizona State University in the festival, which includes Master of Fine Arts students from the University of Iowa, Yale and Carnegie Mellon, among others. 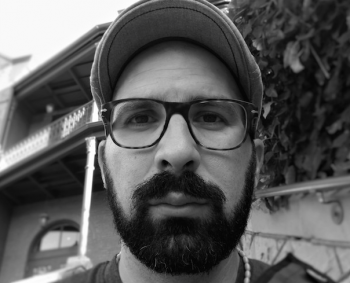 The winning playwrights will participate in a workshop and reading presentation in Aspen, Colorado, Jan. 30 through Feb. 2. They will present before a professional panel and will have the chance to rewrite their work before Theatre Masters presents an Equity production of their plays to members of the New York City industry in late April 2016.

"This is the first time that ASU has been invited to participate in this competition, and we got in," says Gonzalez. "I'm just happy to have the opportunity to show that the next generation of American playwrights are springing up across the whole country, including right here in Arizona."