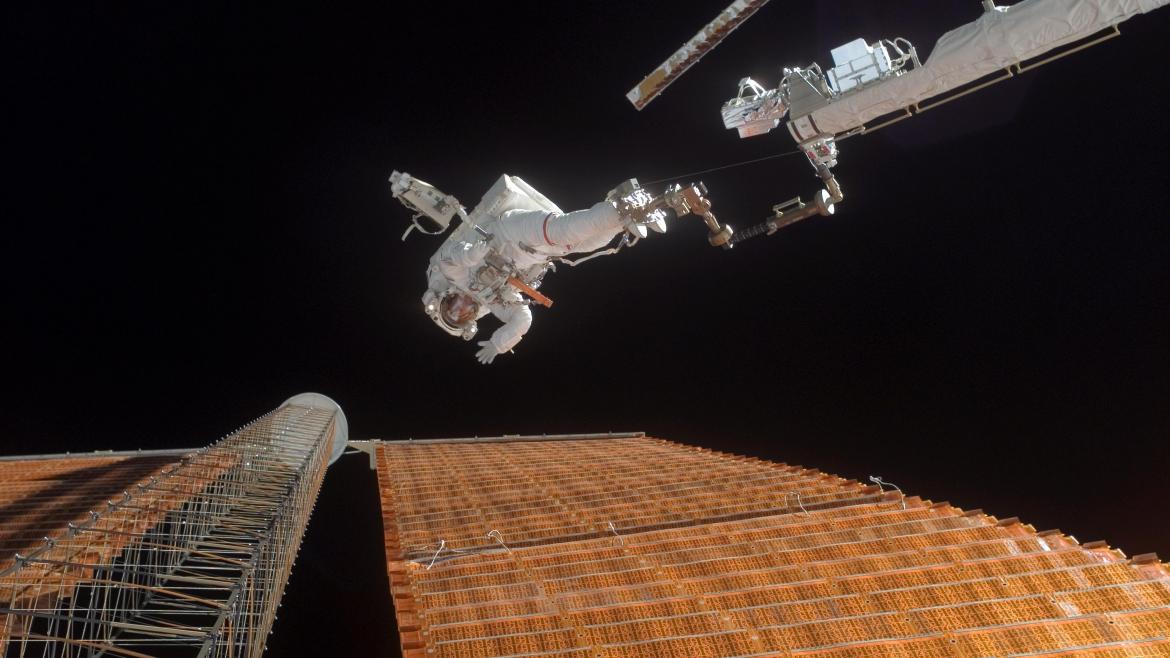 Tempe campus Washington, D.C.
Want to be an astronaut? ASU coaching session offers tips for hopefuls.
ASU resident astronaut (did you know we had one?) shares 17 years of experience.
January 14, 2016

“Frequent travel may be required,” the job description understates.

NASA announced in early December that it’s hiring another round of astronauts. To help Arizona State University students gain an edge in applying for the job, the School of Earth and Space Exploration (SESE) and ASU’s NewSpace Initiative held a coaching session this week for prospective starmen and women.

ASU’s resident astronaut, Scott Parazynski, a University Explorer and professor of practice in the School of Biological and Health Systems EngineeringThe School of Biological and Health Systems Engineering is part of the Ira A. Fulton Schools of Engineering at ASU., conducted the session. With a 17-year career in the astronaut corps that included five space shuttle flights and seven space walks — one of which is considered to be the most difficult and dangerous ever conducted — under his belt, Parazynski (pictured above) offered an expert’s views to the 30 students in attendance.

“There’s no secret formula to being selected to be an astronaut,” Parazynski said.

It’s more a matter of being noticed. Do you run ultramarathons and have two doctorates? People who have worked on complex projects as part of a team in remote or extreme environments will have an edge.

“You really have to toot your own horn,” Parazynski said. “What they’re looking for is ‘Would I spend six months in a tin can with this person?’ ”

Competition for one of the world’s most sought-after jobs is intense, to put it mildly. In 2013, more than 6,000 people applied to the program. Only eight were selected. About 10,000 people will apply this year, Parazynski estimated.

Wednesday’s session was about making the first hurdle, not about passing the huge battery of tests that come later. Although the application declares a bachelor's degree in engineering, biological science, physical science, computer science or mathematics is adequate, Parazynski said honestly most astronauts have doctorates, with a few holding master’s degrees.

“I would love to have ASU represented in the next class of astronauts."
— Scott Parazynski, astronaut and University Explorer at ASU

“I was told ‘Apply early and often,’ ” he said. “If this is something you really want to do in your life, don’t get discouraged.”

He talked about a friend who applied for a decade before being selected and who ended up flying shuttle missions. Applicants who don’t make the cut can reapply. Substantially adding to your resume during the intervening years, such as getting a private pilot’s license or some medical training, will be noticed by NASA administrators.

Future astronauts can expect to spend four to five years in support roles while training to fly. Even if hopefuls graduate from the Astronaut Candidate Program, they still have to learn all of the following: International Space Station systems training, space walk skills training, robotics skills training, Russian language training and aircraft flight readiness training.

“I would love to have ASU represented in the next class of astronauts,” Parazynski said. 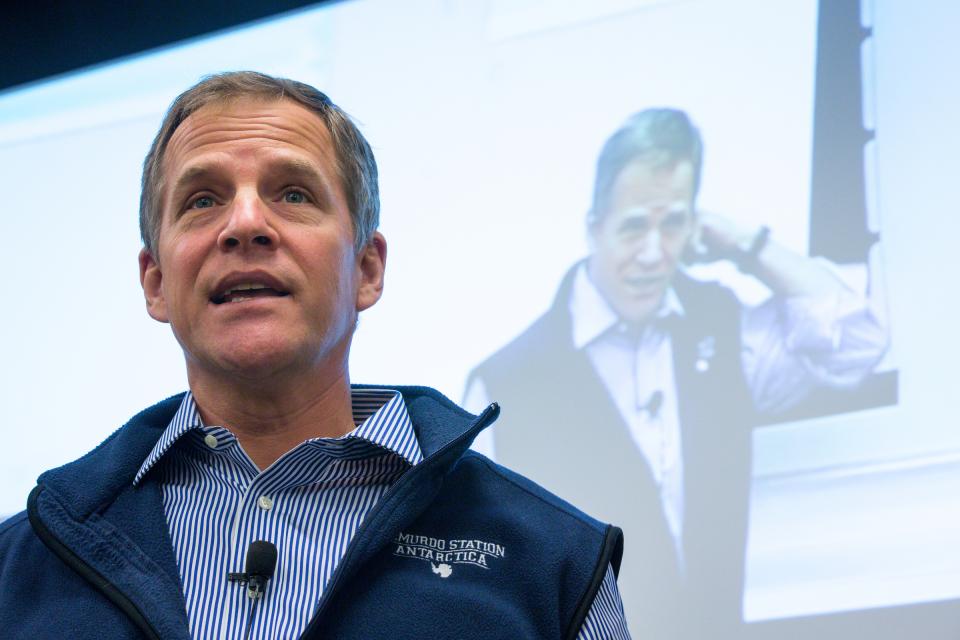 ASU resident astronaut Scott Parazynski speaks to students Wednesday on how best to apply to NASA to become an astronaut. Photo by Charlie Leight/ASU Now

He reminded students that NASA isn’t the only game in town anymore.

“All of you ought to look very broadly at space,” he said. While NASA will be going to deep space, shuttles to the International Space Station and space tourism flights also will require astronauts. XCOR Space Expeditions requires all employees to fly at least once.

“My hunch is they’ll be looking for SESE grads in the future,” he said, citing the transdisciplinary nature of degrees offered by the school, which is part of the College of Liberal Arts and Sciences.

Marc Neveu, a postdoctoral researcher with a Ph.D. in astrophysics, attended the session.

“Being an astronaut has always been a dream of mine,” Neveu said. “Just to see the Earth from space … seeing your planet from space would be incredible.”

As a French citizen, Neveu is ineligible to fly for NASA, but there is always the European Space Agency and private space companies like SpaceX and Blue Origin. 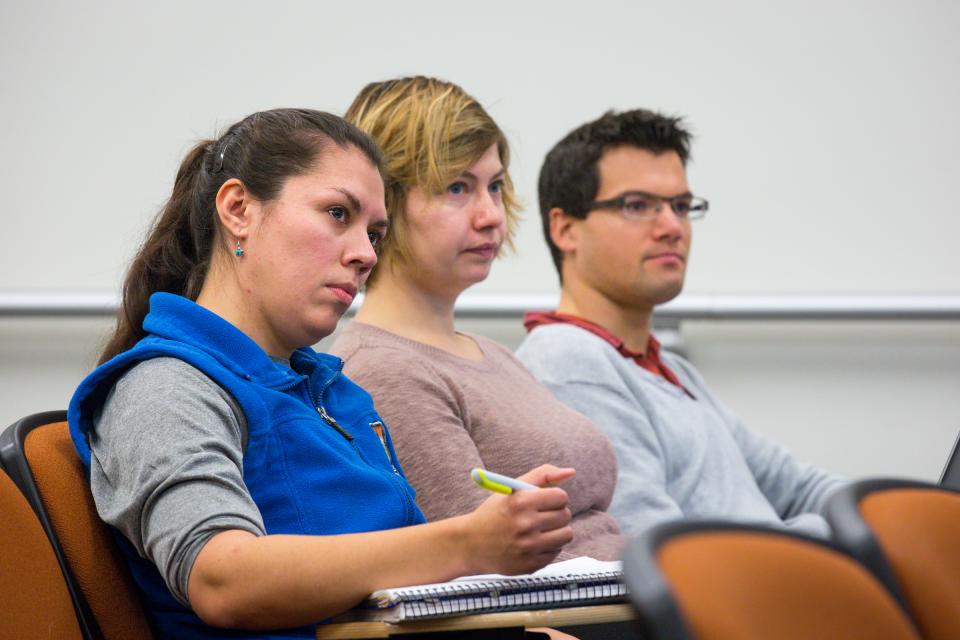 It’s an incredible amount of hard work, but it’s worth all the sacrifice, Parazynski said.

“Space walking is the ultimate astronaut experience,” he said. “I miss it.”

To apply for astronaut candidate: https://www.usajobs.gov/GetJob/ViewDetails/423817000

Top photo: While anchored to a foot restraint on the end of the Orbiter Boom Sensor System, astronaut Scott Parazynski (now ASU's University Explorer) assesses his repair work as the solar array is fully deployed during the STS-120 mission's fourth space walk on Nov. 3, 2007, while Space Shuttle Discovery is docked with the International Space Station. During the seven-hour, 19-minute spacewalk, Parazynski cut a snagged wire and installed improvised stabilizers designed to strengthen the damaged solar array's structure and stability in the vicinity of the damage. Photo by NASA

Setting the stage for academic conversation

Academic writing gets a bad rap.The journals, books and periodicals of colleges and universities are often viewed as divorced from the real world; there is a large gulf separating theory from practice and academic research from everyday life.But that gulf is slowly diminishing as academic discourse opens up to a larger audience, thanks to the Internet. Websites and blogging platforms are helping t...

Setting the stage for academic conversation

Academic writing gets a bad rap.

The journals, books and periodicals of colleges and universities are often viewed as divorced from the real world; there is a large gulf separating theory from practice and academic research from everyday life. 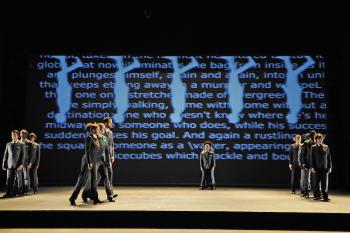 Photo by Tim Trumble, courtesy of Herberger Institute for Design and the Arts

But that gulf is slowly diminishing as academic discourse opens up to a larger audience, thanks to the Internet. Websites and blogging platforms are helping to bring both theoretical and practical discussions to a larger community, creating a space for discovery and innovation.

In the realm of theater, HowlRound is that space. The online journal and blogging platform was established four years ago as “a place for artists to provide feedback, learning, expertise, frustration, and vision — in an effort to enliven the fields of theater and performance to the aspiring and established artist alike.”

Just this year, Arizona State University was named No. 1 in innovation by U.S. News and World Report 2016 college rankings. It comes as no surprise, then, that the ASU School of Film, Dance and Theatre is at the cutting edge of innovative discussions, both in the classroom and online. Since HowlRound’s founding, nearly a dozen ASU-affiliated students, alumni and faculty have contributed to the site on topics ranging from stage combat to immersive theater.

"ASU faculty and students are bringing artists, scholars and theatermakers of all kinds into conversation with one another,” said Jamie Gahlon, senior creative producer of HowlRound. “Their contributions to HowlRound are helping to bridge the gulf between theory and practice for the advancement of theatrical form and discourse."

Julie Rada, an alumna of the MFA in Theatre (concentration in performance) program at ASU, who now works at the University of Utah as a Raymond C. Morales Fellow, has written for the blog on three separate occasions, covering such topics as casting practices in devised theater. She said she writes for HowlRound both because it is speedier than writing for an academic journal and because of the ethics of the site (it’s free to users, unlike journals, which are only free to people with academic institutional affiliations).

“It really is a kind of ‘melting pot’ of academic, scholarly, interrogative publishing, practical how-to’s and idealistic musings from emerging artists,” Rada said. “There’s space for everyone at the table, particularly with the three possibilities for submission (blog, article or series). There are some heavy-hitters in the field who contribute: heads of academic departments, founders of seminal theater companies and ensembles, published playwrights, etc. There’s always the possibility that someone you admire and respect will read and comment on your writing. That’s very exciting.”

Dan Fine is an alumnus of the MFA in Theatre (concentration in interdisciplinary digital media) program, a joint degree of the School of Film, Dance and Theatre and the School of Arts, Media and Engineering. He’s teaching a graduate class on performance technology in the theater department at ASU. He was encouraged to write by Lance Gharavi, assistant director of theater in the School of Film, Dance and Theatre, and he ultimately decided to share that writing (a series of instructives on media design) on HowlRound because he felt it would reach a larger audience.

“What I find with a lot of practitioners is that we are just too busy to write about what we’re doing — because we are constantly doing things,” said Fine. “So there tends to be a lot of information that’s not shared because of that.”

Fine said the online format of HowlRound seemed like the best way to get that information out to people, especially in a field like media design, which is digitally based to begin with.

“It’s something that feels less physically tangible, because you can’t pick it up and touch it, like a book or a journal,” he said of online writing. “But in a different way it feels more tangible because it’s active, it feels like it has more life.”

"HowlRound and similar outlets are opening up new ground for discourse in the theater profession,” said Jacob Pinholster, director of ASU’s School of Film, Dance and Theatre. “Where previously we had a ‘never the twain shall meet’ gulf between popular websites and academic journals, we now have an amazing new field for true interplay between ideas and practice. It is an eloquent statement about both HowlRound's and ASU's relevance to emerging practices and trends in theater that so many of our students, faculty and alumni are consistent contributors."

And the dialogue can only expand further. HowlRound is always open to pitches for essays, blog posts, series and criticism.

“Better thinking makes better art,” Rada said. “The ability to organize your thoughts can make the ephemeral and often evocative work of the theater more tangible and communicative to a wider audience. This requires agile, flexible thinking. And thinking is made better by writing.”