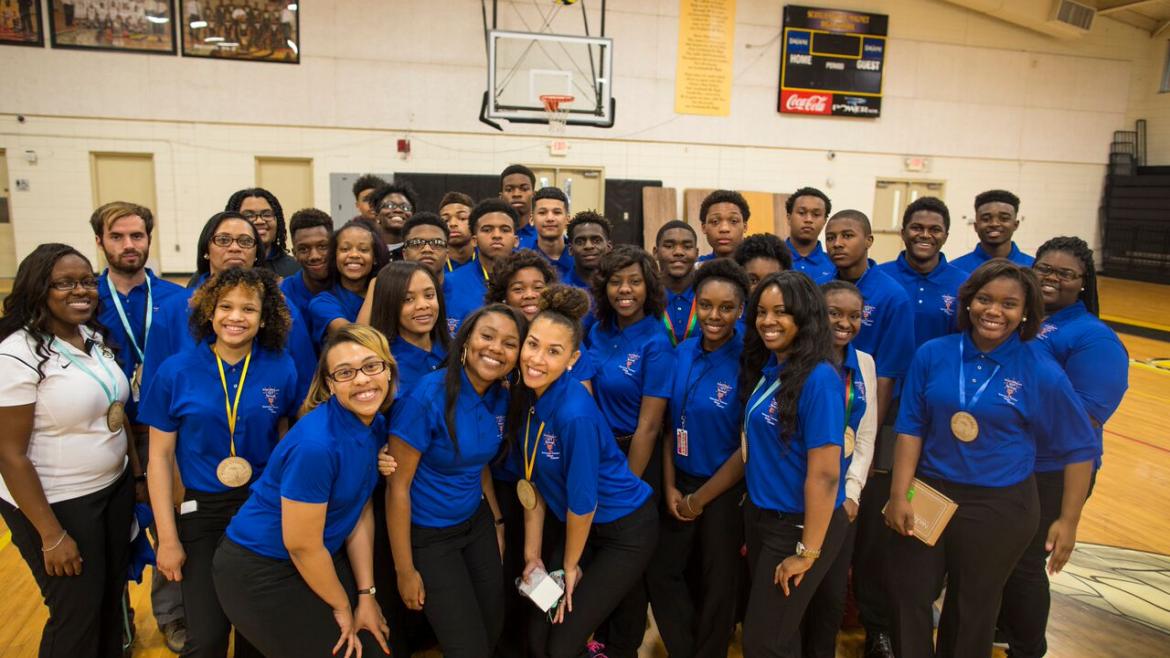 Just two days after his final State of the Union address, President Barack Obama will make his first trip as president to Baton Rouge, Louisiana, where he will speak Thursday morning at McKinley High School.

McKinley High is one of eight schools across the nation partaking in the Innovation through Design Thinking (iDT) program, a product of Arizona State University’s Office of Entrepreneurship and Innovation that trains teachers to embed entrepreneurial thinking in their classrooms.

Katherine Clemens, manager of K-12 initiatives for the Office of Entrepreneurship and Innovation, helped develop the program to meet the growing need for more entrepreneurial and STEM-based curricula at the high school level, and especially among underrepresented communities.

In the iDT program, all of that is tied to real-world problem-solving in the students’ own communities, where they collaborate with local businesses to find solutions through the development of a mobile app — a process that is beneficial to both the students and the businesses.

“The feedback from the businesses has been great,” said Clemens, who often travels around the country to check in on the different schools, assess what’s working and make changes where necessary.

“They have so much enthusiasm about being connected to education and the students because they feel value in the fact that they’re teaching the students a lot. The students have enjoyed learning about small businesses and nonprofits because many have their own entrepreneurial ideas, and one of the goals of the program is to teach them how to make their ideas a reality, to show them what the day-to-day of that looks like, what the process looks like, and why it’s important to support local businesses.

“As well, the students are able to apply their knowledge and skills in a meaningful way that shows them how they can contribute to their community, and [the local businesses] are able to get an outside perspective, which is great.” 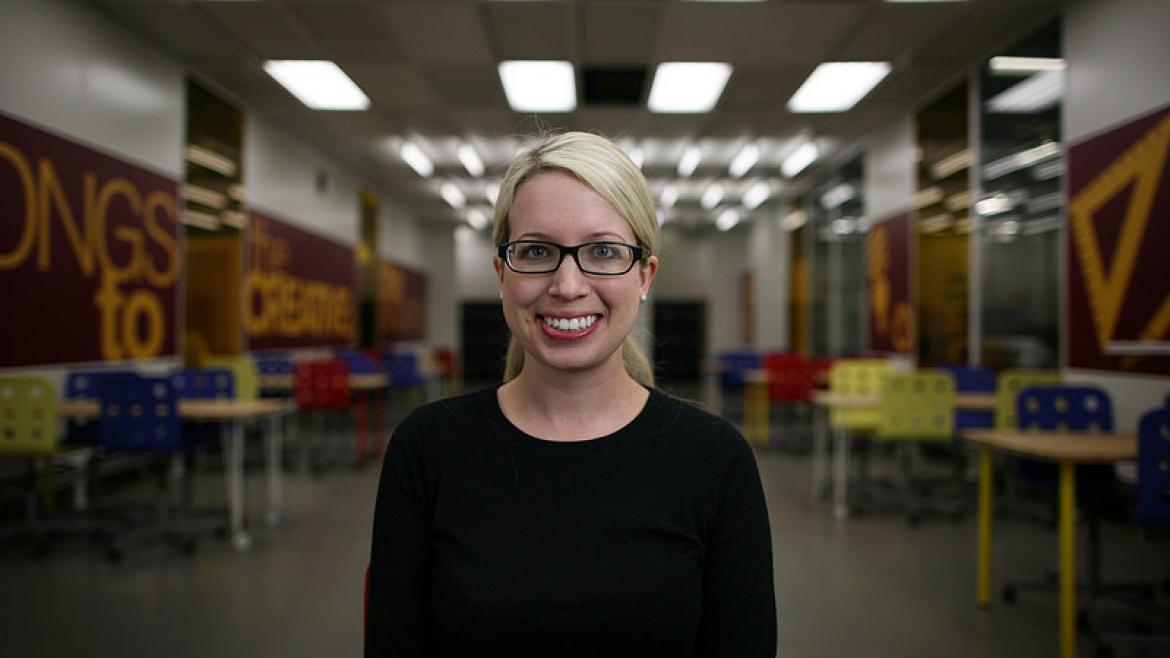 Katherine Clemens, manager
of K-12 initiatives for ASU's Office
of Entrepreneurship and Innovation,
said the students and the teachers
training them in app development
have found the whole iDT process
empowering.

One of the projects students at McKinley are working on is in collaboration with Knock Knock Children's Museum, a brand-new museum that will open this year down the street from the high school. Through the iDT program, students were trained in app development, marketing and business strategy to develop an app to schedule tours; provide directions and museum times; send push notifications for museum events; provide a museum map locator to let patrons know where they are in the museum; and offer a how-to-get-to-another-museum feature.

Clemens reports that both the students and the teachers who are training them in app development have found the whole process empowering.

“Overall, the teachers are very excited about it,” she said. “They have a lot of freedom to guide their students through the project to determine what will work best in their classroom. And the students are excited that they get to take on a leadership role, meeting directly with business owners.”

What’s more, many of the teachers who have participated in the program are eager to share what they’ve learned about teaching app development with other teachers in their schools, sometimes planning professional development courses to show other teachers how to do what they learned and serve the overall purpose of helping students develop an entrepreneurial mind-set.

“Entrepreneurial skills and design thinking are key to preparing high school students to thrive in an innovation economy,” said Sethuraman “Panch” Panchanathan, ASU's senior vice president for Knowledge Enterprise Development. “Using the train-the-trainer model as part of the Innovation through Design Thinking, ASU is empowering educators and their students to create solutions for challenges within their own communities.”

In iDT’s first year, it reached 12 teachers and 350 students. In its second year, those numbers have jumped to 24 teachers and more than 600 students. The Verizon Foundation has been a major player in helping to implement the program, awarding more than $1.2 million in grant funds to ASU since iDT’s launch in 2014.

According to Clemens, the program is a great example of how ASU is involved in embedding and advancing entrepreneurship in schools in underserved communities across the country and providing students a pathway to college.

“ASU is really creating a new higher-education experience that has a focus on entrepreneurship, social embeddedness and real-world problem-solving, so part of this project is to help share the knowledge and skills that we’ve developed to showcase ASU’s expertise in this area,” said Clemens.

On a larger scale, the iDT program is also poised to aid in showcasing the educational excellence of the U.S. as a country — one which President Obama passionately asserted in his address Tuesday is “the most powerful nation on Earth. Period.”

Year in Review: ASU's innovation is a benefit for society

Editor's note: This story is being highlighted in ASU Now's year in review. To read more top stories from 2016, click here.In his annual address to the community, President Michael M. Crow said that Arizona State University’s innovative mindset requires collaboration and purpose, and it is driven by a responsibility to the community.“We’re prepared to innovate to be helpful to your famil... 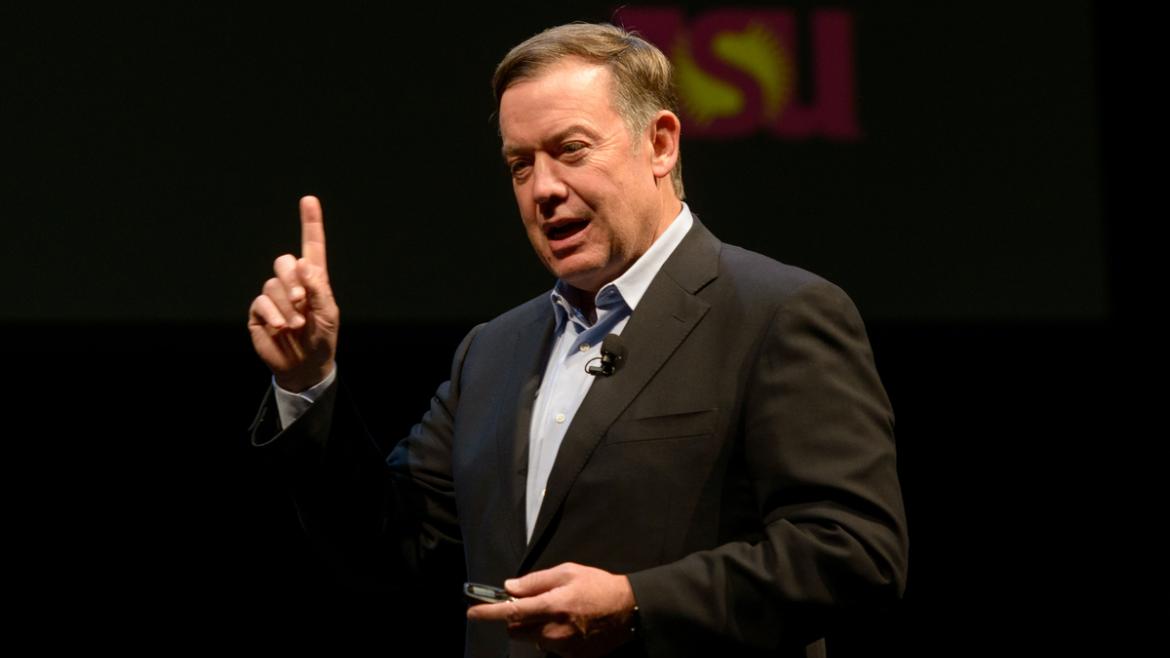 ASU's innovation is a benefit for society

Tempe campus Washington, D.C.
ASU's innovative ways can help more people in Arizona, and beyond, to a degree.
ASU President Crow: Negative political rhetoric keeps me up at night.
January 13, 2016

In his annual address to the community, President Michael M. Crow said that Arizona State University’s innovative mindset requires collaboration and purpose, and it is driven by a responsibility to the community.

“We’re prepared to innovate to be helpful to your family, your business, your hope for your community,” he said.

“We also have public values that we’re protecting, which is to be lower cost and egalitarian in terms of our admission standards.”

Crow made these remarks Wednesday night during his annual Community Conversation at Galvin Playhouse on the Tempe Campus. The dialogue was built around the topic of “What is innovationASU topped the list of “most innovative schools” in the U.S. News and World Report college rankings for 2016 based on a survey of peers. College presidents, provosts and admissions deans around the country nominated up to 10 colleges or universities that are making the most innovative improvements to curriculum, faculty, students, campus life, technology or facilities. ?”

He said that ASU’s innovations show that the United States — itself an innovation in government when it was formed — has unlimited potential.

“In this moment when America needs a model for innovation — we have literally been able to move and innovate at light speed compared to a normal university,” Crow said.

Crow said that it’s difficult for universities to embrace innovation.

“University innovation is like an oxymoronic term. They’re only concerned with their niche,” he said.

“Some universities spend 10 years talking about whether they want to offer a degree program.”

“We were told we needed to raise admission standards, build a medical school and replicate everything everyone else did.” He said the traditional model wasn’t sufficient to meet the state’s needs.

He discussed several ways that ASU has broadened access to university credit, such as the Starbucks College Achievement ProgramThe Starbucks College Achievement Program offers full tuition reimbursement to employees who pursue an online degree through ASU. and the Global Freshmen AcademyThe Global Freshman Academy debuted in the fall semester. Anyone can take online classes and decide after completion whether they want to pay for the ASU credits, which are offered at a rate of $200 per hour.. While the former is open to Starbucks partners around the country and the latter to potential students around the world, they both also can can help Arizonans who want to pursue college credit, he said

“There are a million people in Arizona who started college and never finished,” he said. The public was invited to submit questions via Twitter with the hashtag #AskMichaelCrow. One question was, "What keeps you up at night?"

“People don’t really know what we have inherited — all these educational opportunities and artistic expressions and all the things we’ve got.

“Everyone is talking about how we’re collapsing and the country is not going ahead, and when you look at what we’ve been through, the civil war and the opening of the west, it’s just not the case."

But ASU’s students are not pessimistic, he said.

“When I talk to our kids I don’t get that sense. Maybe my elixir is being with them. They’re filled with this desire to make a difference.”

Another problem that keeps Crow up at night is the notion of fairness and equity.

“We still live in a society that has a lot of outcomes determined by your parents’ income and that’s an unfair thing.

“We need to do anything we can to find that student with talent — the rich kid, the poor kid, the homeless kid, the foster kid.”