Since prehistoric times, clays have been used by people for medicinal purposes. Whether by eating it, soaking in a mud bath, or using it to stop bleeding from wounds, clay has long been part of keeping humans healthy. Certain clays have also been found with germ-killing abilities, but how these work has remained unclear.

A new discovery by Arizona State University scientists shows exactly how two specific metallic elements in the right kinds of clay can kill troublesome bacteria that infect humans and animals. 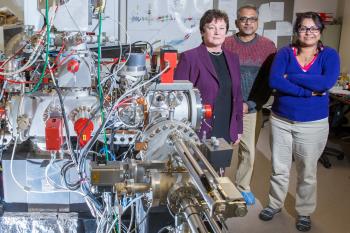 "We think of this mechanism like the Trojan horse attack in ancient Greece," said Lynda Williams, a clay-mineral scientist at ASU's School of Earth and Space Exploration (SESE). "Two elements in the clay work in tandem to kill bacteria." 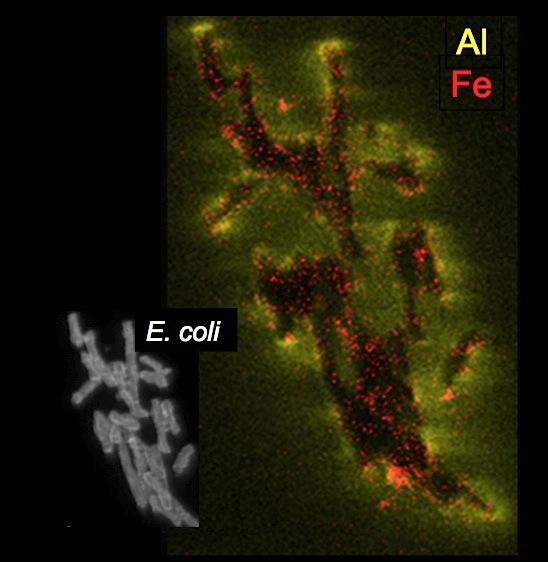 Working in tandem, chemically reduced iron (Fe2+) and aluminum (Al3+) in blue clays can kill pathogenic bacteria, such as these E. coli cells. Image by ASU

She explained, "One metallic element — chemically reduced iron, which in small amounts is required by a bacterial cell for nutrition — tricks the cell into opening its wall. Then another element — aluminum — props the cell wall open, allowing a flood of iron to enter the cell. This overabundance of iron then poisons the cell, killing it as the reduced iron becomes oxidized."

"It's like putting a nail in the coffin of the dead bacteria," said Keith Morrison, Williams' former doctoral student, who is now at Lawrence Livermore National Laboratory.

Morrison is the lead author of the paper reporting the discovery, which was published Jan. 8 in Nature Scientific Reports. Rajeev Misra, a microbiology professor in ASU's School of Life Sciences (SOLS) is the third author of the paper. Morrison's work in Misra's laboratory gave insights into the mechanism by which clays work to kill bacteria. Both SESE and SOLS are units in the university's College of Liberal Arts and Sciences.

A critical part of the investigation involved the use of ASU’s NanoSIMS, which is part of the National Science Foundation-supported Secondary Ion Mass Spectrometry Facility. The study also benefited from a variety of electron microscopes and X-ray equipment in the LeRoy Eyring Center for Solid State Science.

A chance discovery of a medicinal clay from Europe caught Williams' attention and put her on the track. A French philanthropist with clinical experience in Africa told her about a particular green-hued clay found near the philanthropist's childhood home in France. The philanthropist, Line Brunet de Courssou, had taken samples of the clay to Africa, where she documented its cure for Buruli ulcer, a flesh-eating skin disease, in patients in the African country of Cote d'Ivoire (Ivory Coast).

Williams attempted to locate the site of the green clay deposit, which was in the French Massif Central region. When the search proved unsuccessful, she began systematically testing clays sold online as "healing clays."

After testing dozens of samples, Williams and her team identified a blue-colored clay from the Oregon Cascades that proved to be highly antibacterial. The research reported in the paper shows that it works against a broad spectrum of human pathogens, including antibiotic-resistant strains such as methicillin-resistant Staphylococcus aureus (MRSA).

The colors of the clays reflect their origins, Williams said. The greens and blues of antibacterial clays come from having a high content of chemically reduced iron (Fe2+), as opposed to oxidized iron (Fe3+), which gives the familiar red color of rust (Fe-oxide), often associated with many clays. Reduced clays are common in many parts of the world, typically forming in volcanic ash layers as rocks become altered by water that is oxygen-deprived and hydrogen-rich.

"The novelty of this research is two-fold: identifying the natural environment of the formation of clays toxic to bacteria, and how the chemistry of these clays attacks and destroys the bacteria,” said Enriqueta Barrera, a program director in the National Science Foundation’s Division of Earth Sciences, which funded the research.

Because blue and green clays are found abundantly in nature, Williams said, this discovery of how their antibacterial action works should lead to alternative ways of treating infections and diseases that are persistent and hard to heal with antibiotics.

Williams said, "Discovery of how natural clays kill human pathogens may lead to a new economic use of such clays and also to new drug designs."

On Tuesday, Jan. 4, President Barack Obama described his executive action on new gun-control measures, focusing on background checks and tracking weapons sales. News organizations began counting down to the Thursday night town hall on the measures almost immediately. The issue is a hot topic, and divisive in American politics: How much control is too much?Erik Luna, professor of criminal law at th...

On Tuesday, Jan. 4, President Barack Obama described his executive action on new gun-control measures, focusing on background checks and tracking weapons sales. News organizations began counting down to the Thursday night town hall on the measures almost immediately. The issue is a hot topic, and divisive in American politics: How much control is too much?

Erik Luna, professor of criminal law at the ASU Sandra Day O'Connor College of Law and resident expert on the Second Amendment, tackles some of the questions at forefront of mind.

Question: The question on everyone’s mind: Is President Obama stretching the limits of executive action?

Answer: The actions have been pitched as clarifying and enforcing current law, not crafting new law. But, of course, the interpretation of existing provisions can be so unfaithful to the text and context of a statutory scheme as to have the effect of new “law.”

What can be said is the following:

1. We should expect gun-rights advocates to litigate every legal issue raised by President Obama’s actions. Some pressure points will include the Administration’s interpretation of who qualifies as a gun dealer (“engaged in the business” of dealing in firearms) for purposes of federal law.

2. America’s chief executives during this millennium, Presidents Bush and Obama, have opened new vistas of presidential power. Both adopted broad interpretations of their authority in counterterrorism efforts. In addition, President Bush had the habit of using “signing statements” to assert his right to ignore or not enforce laws enacted by Congress, while President Obama’s refusal to take action against illegal immigrants under his DACA policy (Deferred Action for Childhood Arrivals) stretched the traditional understanding of “prosecutorial discretion.” In the end, whether someone agrees or disagrees with a particular executive action will likely reflect their normative commitments (e.g., gun rights vs. gun control, someone’s stance on immigration policy, etc.). But the precedent set by these (in)actions is unnerving for those concerned about constitutional structure, the limits of the president’s authority, and his duty to “take Care that the Laws be faithfully executed.”

Q: What’s the legal culture around this issue like? Does the SCOTUS’ 2010 ruling on gun ownership make these new restrictions more difficult?

A: When I heard President Obama say the following — “I believe in the Second Amendment. It is there, written on the paper. It guarantees a right to bear arms.” — I almost spit out my coffee. I cannot imagine that an unreconstructed political liberal like the president actually believes in the Second Amendment, by which I mean not only the text of the constitutional provision but also its current interpretation by the Supreme Court. In District of Columbia v. Heller (2010), the Court ruled that the Second Amendment conferred an individual right to keep and bear arms, rather than a collective (and thus largely non-litigable) right to possess and carry a firearm in connection with militia service. In turn, the Court in McDonald v. Chicago (2010) held that the Second Amendment was fully applicable to the states. If you think that President Obama “believes in” (i.e., supported) either of these rulings, I’ve got a bridge I’d like to sell you.

Nonetheless, it seems unlikely that the president’s actions (at least as they have been outlined to this point) would be deemed by the courts to violate the Second Amendment. The decisions in "Heller" and "McDonald" concerned absolute bans on handguns possessed for self-defense in the home — an issue which is not obviously implicated by the president’s actions — and the Supreme Court went out of the way to emphasize the limited nature of its opinions.

Q: Politically, it has been historically noted that gun control has motivated those on the anti-control side more than pro-control side. Will this deprive the president and others of the political capital to enact tougher regulations?

A: It’s not clear that the president even has the capital to effect the plan he outlined, let alone genuinely tough gun restrictions, at least to the extent that any critical component depends on congressional action. Apparently, for example, President Obama will request that Congress fund the hiring of new government employees to conduct gun-related investigations. It would not surprise me if a significant number of federal lawmakers, perhaps a majority, reject the president’s request.

Q: Arizona is among the states with comparatively more relaxed laws, including concealed carry without requiring a permit. Will Arizonans feel much of an effect from these changes?

A: Probably not, unless the president’s actions portend a vast increase in federal enforcement activity in Arizona.