Tempe campus
ASU students craft a song, with the help of a pair of pet rodents.
"Ratsputin" isn't just a clever name, it's music created by rats and humans.
January 4, 2016

ASU students create music with a pair of rats, and it sounds pretty interesting

The song that filled the room in ASU's Stauffer Hall with psychedelic drones, atmospheric bleeps and ethereal cries wasn’t exactly jazz, or pop.

But, sonically, the composition could have been mistaken for the Beatles’ “Revolution 9” or even a more dissonant take on Bjork’s “Biophilia” album.

It sounded nice, if not interesting.

Which could be surprising considering half of the musical quartet was vermin. And we’re not talking about street punks or rat finks, but actual rodents named Gus and Izo.

It’s understandable if you recoiled a bit at the mention of rats making music. The public’s unfavorable perception of these rodents was the driving force behind the project.

“The general public views rodents unfavorably, and even going as far as labeling these animals as a second-class set of species. We wanted to change the perception of that,” Sanchez said. “Rats are as intelligent as any dog or cat and can be easily trained. If they’re out of the cage and they’re nice enough, they will come to me if I call them.”

And in December, they responded to the call to produce sounds for an experimental piece for their Collaborative Projects and Research class, which Sanchez says he stumbled upon by accident. 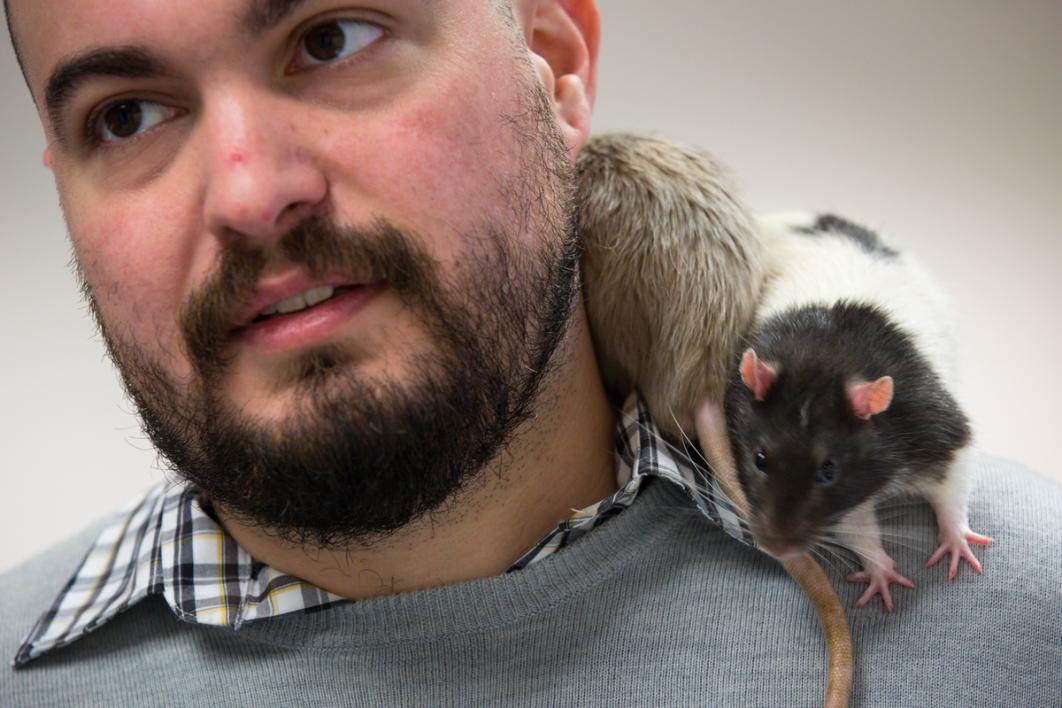 Digital Culture in Music junior Andrew Sanchez talks about Ratsputin musical performance with his two rats, Izo and Gus, on Dec. 17. The rats walk on four connected iPads, which produce synthesized sounds. Sanchez, a musician, will jam with them. 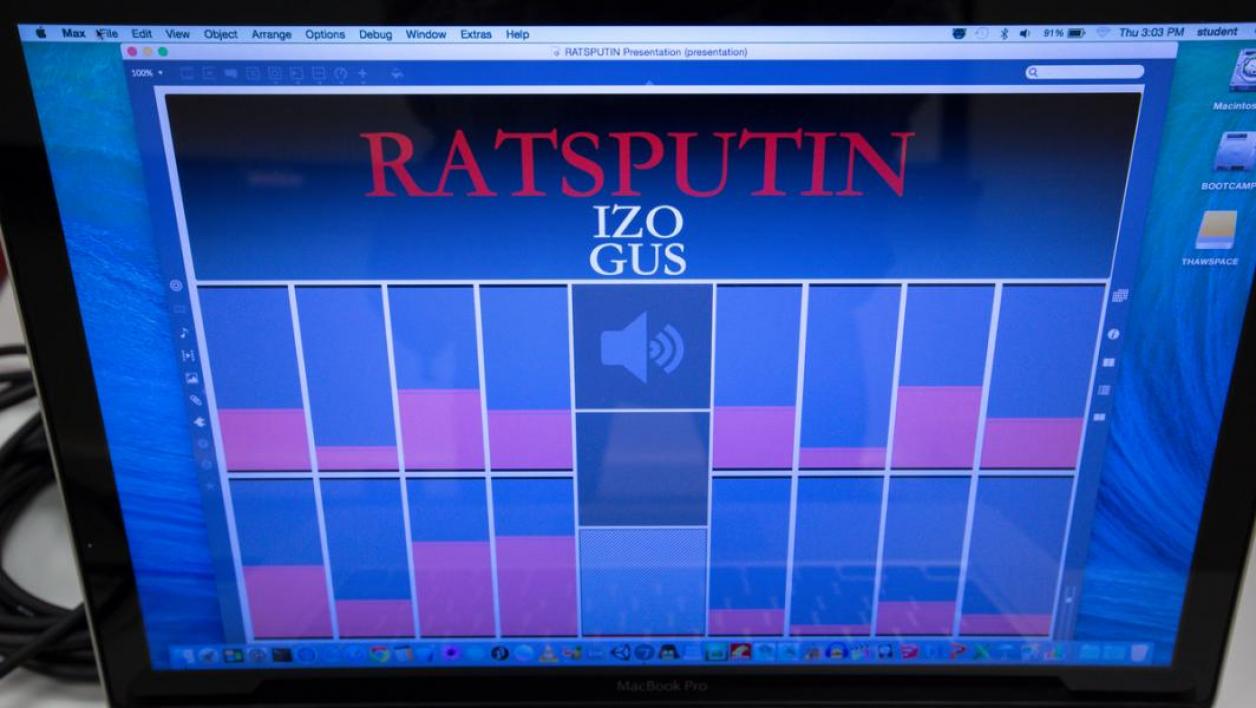 Digital Culture in Music juniors Andrew Sanchez and Jennifer Anderson have a presentation app to show musical levels during the Ratsputin musical performance with rats Izo and Gus. 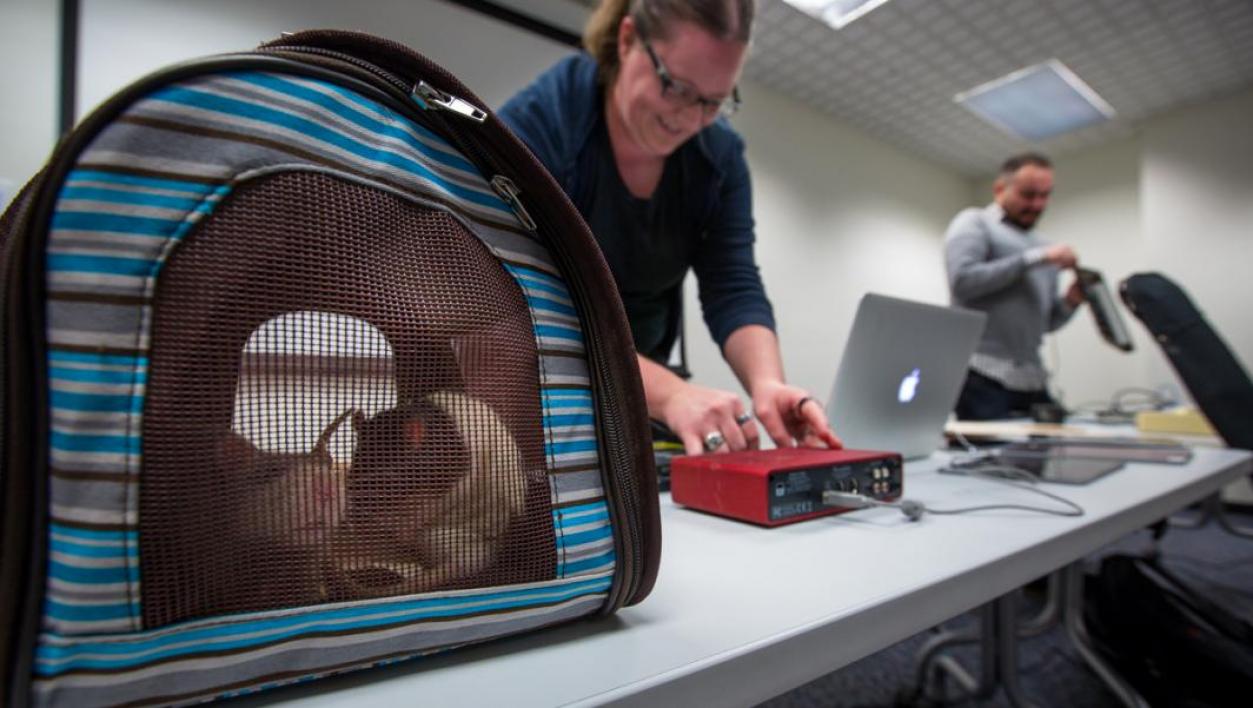 Rats Izo and Gus are confined in their carrier as Digital Culture in Music juniors Jennifer Anderson and Andrew Sanchez prepare for a Ratsputin musical performance in a lab in the Stauffer building on the Tempe campus. Izo walks over a mixing board as Andrew Sanchez and Jennifer Anderson prepare for a Ratsputin musical performance accompanied by Izo and Gus, Sanchez's other pet rat. Andrew Sanchez and Jennifer Anderson finish preparations for a Ratsputin musical performance. The rats walk on four connected iPads, producing synthesized sounds, while Sanchez plays bass and Anderson fills in spaces of silence with carefully chosen sounds and effects on her synthesizer. Izo (top) and Gus start moving around on the four connected iPads.

So did Sanchez’s mentor, Garth Paine, a professor of sound and interactive media.

“There’s value in interspecies communication, and animals definitely use sound to communicate,” Paine said. “The intention here is not to do a full empirical study because we’re making music with them. It’s more about the interspecies level of communication and what it means to be autonomous agents into the musical world.”

It wasn’t the first time rats and music have been used in an academic setting. In 1998, Francis Rauscher, a cellist turned psychologist, played a CD of Mozart for rats in an experiment she conducted in a University of Wisconsin lab. She suggested the famous composer’s music stimulated specific neuron connections in the abstract reasoning center of the brain, making rats scamper faster and more accurately through a maze. The experiment and a series of others conducted by Rauscher coined the phrase the “Mozart Effect.”

Sanchez and Anderson sifted through mountains of research on interspecies performances but could not find any evidence where rats actively participated in the creation of the music.

“I’m a classically trained musician, so the prospect of doing something like this just seemed wild and fun,” Anderson said. “We knew the rats couldn’t sing or play an instrument, so we had to come up with an idea that made them not only active participants but actual leaders.”

This was achieved by placing four Apple iPads at the bottom of an enclosed wooden crate. The rats crafted sounds by their movements on the tablet, which was then run through a Kaossilator Pro, a palm-sized synthesizer that features a wide array of sound and loop recordings. Once Gus and Izo began to perform — thanks to a decent supply of kale and cucumbers — Sanchez droned on his bass while Anderson filled in spaces of silence with carefully chosen sounds and effects on her synthesizer, adding textures and timbres that complemented and played off their smaller counterparts.

For Anderson, jamming with Gus and Izo was not much different than performing in a classical concert.

“As a violinist I have to watch the conductor to see what the cues are and where I should be in order to follow,” Anderson said. “The same concept sort of applies here. We can have all the structure we want, but it’s really up to Gus and Izo and how playful they feel. They lead the way whether they know it or not.”

No idea if the Gus and Izo are Rolling Stones fans, but they certainly helped these two students achieve total “Ratisfaction.”

'This is where I want to stay'

John Craft didn't think he'd spend 42 years teaching broadcast journalism at the Walter Cronkite School of Journalism and Mass Communication. After taking the job in 1973, he thought he'd teach for a few years, then return to working in the broadcast world."But it didn't happen. I was very happy doing what I was doing, very happy teaching in the university," he said. "And I thought, yeah, this is ... 'This is where I want to stay'

John Craft didn't think he'd spend 42 years teaching broadcast journalism at the Walter Cronkite School of Journalism and Mass Communication. After taking the job in 1973, he thought he'd teach for a few years, then return to working in the broadcast world.

As Craft reflects on a long career at Arizona State University, he says part of the reason his position has been so appealing is seeing the students succeed. And part of the reason he has been able to help them succeed is by keeping his hands in the "real world" of broadcast news, and bringing those evolving lessons into his classrooms. See more of Craft looking back on his career and the Cronkite School in this video feature on the veteran faculty member.