Scientists have drawn up molecular blueprints of a tiny cellular “nanomachine,” whose evolution is an extraordinary feat of nature, by using one of the brightest X-ray sources on Earth.

The scientists produced the structural map of this nanomachine — diacylglycerol kinase — by using a “hit and run” crystallography technique. In doing so, they have been able to understand how the tiny enzyme performs critical cellular duties — answering questions that have been on the table for more than 50 years about this “paradigmatic protein.” 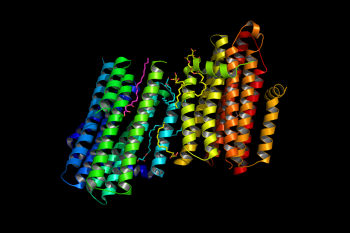 This graphic shows the structure of diacylglycerol kinase (DgkA) determined with the Free Electron Laser in Stanford, California. This new structure has been deposited in the protein data bank under the code 4UYO. Download Full Image

Kinases are key players in metabolism, cell signalling, protein regulation, cellular transport, secretory processes, and many other cellular pathways that allow us to function healthily. They coordinate the transfer of energy from certain molecules to specific substrates, affecting their activity, reactivity and ability to bind other molecules.

Diacylglycerol kinase, the focus of this study, plays a role in bacterial cell wall synthesis. It is a small, integral membrane enzyme that coordinates a particularly complex reaction: Its lipid substrate is hydrophobic (repelled by water) and resides in cell membranes, while its co-substrate, ATP, is entirely water soluble.

How it does this had remained a mystery for decades, but the newly produced blueprints have answered these questions.

“How this diminutive nanomachine, less than 10 nm tall, brings these two disparate substrates together at the membrane interface for reaction is revealed in a molecularly detailed crystal structure. It is the smallest known kinase, and seeing its form with crystal clarity is now helping us to answer questions that formed from over 50 years of work on this paradigmatic protein,” said Martin Caffrey, professor of membrane structural and functional biology at Trinity College Dublin.

Figuring out how this tiny machine works at the molecular level was enormously facilitated by the use of one of the brightest X-ray sources on Earth, the X-ray free-electron laser at the Stanford Linear Accelerator Center.

Professor Caffrey added: “This instrument produces bursts of X-rays just femtoseconds (a quad-trillionth of a second) long. With these short bursts we were able to obtain structural information about the enzyme before it vaporized through radiation damage in what I tritely refer to as 'hit and run' serial crystallography.”

According to Petra Fromme, the director of the Center for Applied Structural Discovery at Arizona State University’s Biodesign Institute and a co-author of the current study, “This is the first structure of a protein that is a membrane-integral enzyme and important biocatalyst in the cell.” (Biocatalysts speed up the rate of critical biological reactions.)

The tiny kinase is one of the research targets for the NIH-funded Center for Membrane Proteins in Infectious Diseases at ASU, which is devoted to unraveling the molecular basis of viral and bacterial proteins involved in diseases as well as the human proteins defending the body from pathogen attack.

The ASU team contributed to the work with expertise in crystal growth and sample injection, as well as data collection and evaluation. In the future, the scientists hope to extend their free-electron laser work to make “X-ray movies” of this remarkable nanomachine, so as to watch how it “does chemistry” in atomic detail in real time. The article describing the work has just been published in the leading journal Nature Communications.

The team of researchers at ASU includes faculty Wei Liu, Petra Fromme and Raimund Fromme from the School of Molecular Sciences, and John Spence, Uwe Weierstall and Nadia Zatsepin from the Department of Physics, researcher Ingo Grotjohann as well as graduate students Shibom Basu, Christopher Kupitz and Kimberley Rendek.

Editor's note: This story is part of a series of student profiles that are part of our December 2015 commencement coverage.No matter where one’s educational path begins, the journey is often filled with unexpected twists and turns. Natalya Borakowski’s path began in Moscow, Russia.“I have a master’s degree in music education, something I received back in Russia and something my parents alw... 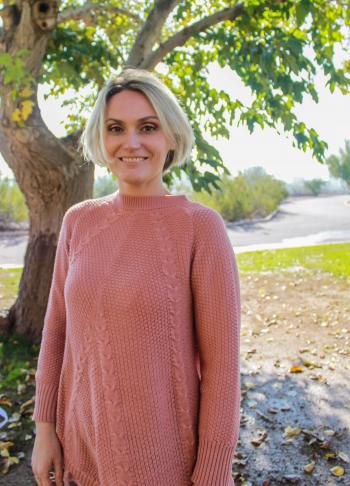 Natalya Borakowski’s path began in Moscow, Russia, with a master's in music education and led her to studying genetics and cell development at ASU. Download Full Image

“I have a master’s degree in music education, something I received back in Russia and something my parents always wanted me to have,” Borakowski said.

“However, I never saw myself as a teacher, so after years of searching and trying different careers, everything from waitressing to banking, I finally found my passion in skin care.”

Borakowski opened her own business after receiving her aesthetician license. Her practice, dedicated to helping people with problematic skin, became successful.

“Acne disease became my nemesis and the best friend,” said Borakowski, who had moved to Arizona from Moscow in 1999. “I made a lot of money helping people with acne, only to learn that there is nothing I can do to prevent future breakouts.”

This realization shifted her path back to higher education. Borakowski enrolled at Scottsdale Community College in 2012 to study biology, graduating with honors in May 2013.

“I believe the cure for acne lies beneath the skin,” Borakowski said. “I believe our modern treatments for acne are not effective and are only made to treat existing breakouts.”

After transferring to Arizona State University in fall 2013, Borakowski’s career goal further developed to combine her love of skin care with her ever-evolving dedication to finding unique solutions.

“My goal is to become naturopathic physician, not a dermatologist, because I do not want to treat the skin, I want to treat entire human body in order to find a unique cure for any skin condition for every individual,” said Borakowski, who received her degree in genetics, cell and developmental biology in the School of Life Sciences, part of ASU's College of Liberal Arts and Sciences.

She found that ASU was the perfect institution to accommodate her ambitious goals along with her work and home life.

“I am very pleased that I was accepted to ASU,” said Borakowski, who graduated with a 4.0 GPA. “School is conveniently close to my work and home, and offers very comprehensive and very interesting classes to prepare me for medical school ahead.”