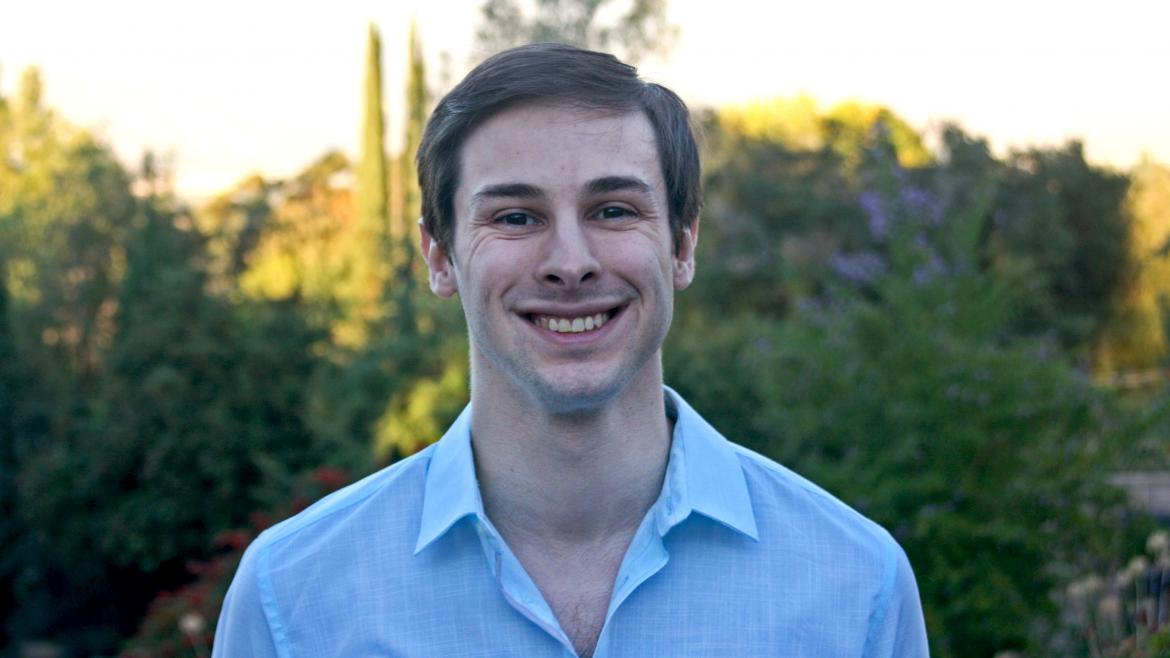 Faster than a speeding couplet

Online
Faster than a speeding couplet: ASU English major sprints to diploma.
This ASU student can get through his university studies faster than you can.
December 15, 2015

Curtis Gokcen is a remarkable student.

But not necessarily because the 27-year-old Arizona State University online student is graduating this month with a 3.9 GPA. Or because the EnglishThe ASU Department of English is part of the College of Liberal Arts and Sciences. major overcame drug addiction before setting his sights on a diploma.

These are fine accomplishments. But what sets Gokcen apart is the pace at which he earned his degree after transferring from a community college. Since enrolling in ASU’s online program in October 2014, he has completed 22 classes.

Yes, you read that right. In just over a year, Gokcen completed a course load most students tackle in two, sometimes three, years.

"I think part of it was just feeling like I had wasted a lot of time and that I needed to somehow make up time and go kind of as quickly as I could," Gokcen said.

Dropping out, dealing with addiction

But before he could go to Arizona State University, he had to learn how to grow up.

After graduating from Holy Ghost Preparatory School in Bensalem, Pennsylvania, in 2005, Gokcen enrolled at the University of Pittsburgh for the wrong reasons.

"I basically only went to school because that’s what you’re supposed to do after high school, you know? I had no idea what I wanted to study, what I was interested in, didn’t take school seriously at all," he said.

After a year and a half, he dropped out. A decade-long battle with addiction wasn't helping things.

Gokcen said he began experimenting with alcohol and marijuana in 2003, while still in high school. That evolved into an opiates dependency, including OxyContin and other prescription pills.

After leaving university he worked odd retail jobs before moving to Africa, where his father was working as an orthopedic surgeon for the nonprofit group Cure International. All the while, Gokcen said he was still feeding his drug habit.

It wasn’t until after Gokcen returned to Pennsylvania in 2012 that he came to terms with his addiction. He said it wasn't so much a matter of hitting rock bottom, but realizing that he had led a life of unfulfilled potential for a quarter-century.

"I just got to the point where I just got sick of it all and I realized that I just needed to change," Gokcen said. "It wasn’t like a single event; it was just kind of built up over time, and I just more or less decided that I just couldn’t live like that anymore ... you know, the daily routine of kind of going through withdrawal if you don’t use and just, the day-in and day-out worrying about whether you’re going to wake up and feel awful."

With the advice and support of his parents, who returned to the United States in 2013, Gokcen checked himself into rehab in Southern California. Two months later, he began taking classes at Crafton Hills Community College in Yucaipa, California, where he excelled. That led him to pursue his education full-time (though for Gokcen, the term seems a bit of an understatement) at Arizona State University, thanks to the institution's robust online course offerings.

"I read from a lot of different sources that ASU is one of the top online programs, specifically for English," Gokcen said. "First of all, part of the problem that I had at community college was feeling that I was like 10 years older than everyone and a little out of place going to classes and stuff. I’ve liked not having to deal with that, I guess, in the online classes, but also it was just easier for me to stay focused once I got a little motivated."

The easy assumption to make is that Gokcen, in completing the 68 units required for his English degree in 14 months, had traded a negative addiction for a positive one. But he bristles at the suggestion.

"I didn’t have a job . ... Kind of how we looked at it, I was putting in [the] similar kind of hours if you look into the workweek," Gokcen said.

Every day of the week would be dedicated to his education. During the weekdays Gokcen would wake up at 8:30 a.m., have a cup of coffee and focus on coursework from 9 a.m. to 4:30 p.m. On the weekends, he would work for three to four hours on any essays or projects before starting all over again on Monday.

"After the first couple of months I had to petition to be allowed to take over 12 credits," Gokcen said. "But I always knew, and my family has always told me that I’d had the ability to pull something like this off. For me, it was more the motivation and self-control. I just got really motivated — I think it’s just as simple as that."

Now, Gokcen is the proud owner of a bachelor's degree in English, even though he can't quite believe it.

"I guess it’s a little surreal, because if you had asked me two years ago I probably would have said I’m never going to finish college," Gokcen said. "So once my grades are finally calculated and I actually get the piece of paper it’ll kind of settle in a little more. ... But I definitely feel a lot of relief, just to be done, but also, you know, a sense of accomplishment and pride. Just overall really happy that I was able to do what I was able to do. ASU has really been helpful in making this happen."

Editor's note: This story is part of a series of student profiles that are part of our December 2015 commencement coverage.Ashley Peatross always knew she wanted to be involved in entertainment production — she just wasn’t sure where that path would ultimately lead. The 27-year-old Cleveland transplant came to Arizona State University to study film after obtaining a degree in recording arts a...

Ashley Peatross always knew she wanted to be involved in entertainment production — she just wasn’t sure where that path would ultimately lead. 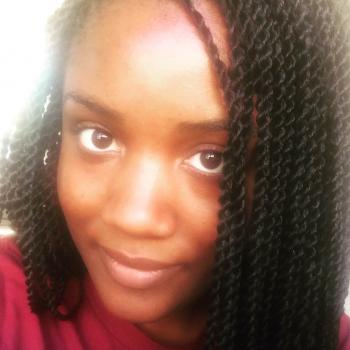 Ashley Peatross is graduating from ASU with a film degree, but she's not leaving the university. Peatross is moving on to work with ASU's Film Spark program in Santa Monica. Download Full Image

The 27-year-old Cleveland transplant came to Arizona State University to study film after obtaining a degree in recording arts and technology from "Tri-C University" (Cuyahoga Community College) in her hometown.

“The reason I came here was not only because I saw the connection to Los Angeles with Hollywood Invades Tempe [a film-screening series at ASU] bringing industry professionals here, but also because this is just a great place to learn, to make mistakes, to get support from your professors. We have a lot of resources that we can use,” Peatross says.

During her time in the School of Film, Dance and Theatre, Peatross was quick to take advantage of these resources.

The first big opportunity for Peatross — who chased her bachelor's in film with a concentration in film and media production — came when she was selected to participate in ASU Film Spark’s Feature Film Internship Initiative for the movie “Car Dogs.”

“I said to myself, ‘I’m a film student — I need to get my hands involved,’ ” Peatross says. “With film, you can’t just teach it [in a classroom]. You have to be on set, you have to learn hands-on. So I thought, why not do it? They brought in industry professionals, they taught us so much, and I learned a tremendous amount about everything.”

Peatross worked as assistant to the line producer, and even took on a small acting role in the film, playing Octavia Spencer’s daughter during the four months of production. But her true passion is directing.

For her senior film capstone project, Peatross got to explore this role; she wrote, produced and directed a film titled “Embrace,” which told the story of a young tattoo artist having to choose between saving his deceased mother’s tattoo shop or pursuing his dream as a fine artist.

“With directing you get to work with actors, you get to see how the story unfolds, you get to communicate with your cast and crew … and when you finally get to say 'action,' and you get to see them actually perform your word and everybody’s behind you supporting you as you’re seeing your project come to life, it’s amazing,” Peatross says.

“Embrace” was selected to be screened at the Fall Film Capstone Showcase, where Peatross was subsequently awarded the F. Miguel Valenti Award for Ethical Filmmaking, which is presented to the project that substantially and significantly represents issues and themes related to ethical inquiries and/or represents complex and difficult subject matter in an ethically responsible and compelling manner.

The future looks bright for this grad. She already has a fellowship lined up post-graduation at the brand-new ASU Film Spark offices in Santa Monica, California. Film Spark is a career accelerator and industry innovation incubator responsible for programs like Hollywood Invades Tempe and the Feature Film Internship Initiative. In just five years, Film Spark has connected ASU students with five Oscar winners, six Oscar nominees, numerous blockbuster producers and many award-winning directors.

Peatross’ ultimate dream? To one day direct and produce a major feature from a major studio that is an action/thriller. She sees it as a specific opportunity for a woman in a genre dominated by men.

“We don’t see enough of a male’s point of view looking through a woman’s lens,” Peatross says. “It’s different and it’s going to be a lot of work. There are a lot of years I still need to get under my belt for that.”

But in the meantime, she’s content to keep working toward those goals, and committing to what she cares about most.

“I love how film, and other kinds of media, can influence you and change your outlook or just make you laugh or cry,” Peatross says. “It can be relaxing or it can be intense and you can learn. It can take you different places, and I like them all.”